In Part I, we addressed many of the open questions from the community about the Diablo IV game designs we revealed at BlizzCon. I recommend checking that out if you haven’t already.

Itemization is a huge core part of any Action RPG. We’re focusing specifically on itemization in this blog because it’s a complex and nuanced topic. Let’s start with two key principles that guide us as the Diablo IV development team.

First, we agree that adding depth and customization to your character through itemization is incredibly valuable and important to the game. This has been the most-discussed topic since we revealed Diablo IV. To be clear—we believe Diablo IV itemization should be deep and rewarding and that’s one of our highest priorities. Another important philosophy across the whole game for our team is the concept “Easy to learn, difficult to master.” This core philosophy helped many of us become the hardcore gamers we are today, and one we want to embrace throughout the Diablo IV development process.

Second, we agree with the feedback that Diablo IV shouldn’t just mimic the itemization in our previous Diablo games. Our plan is to take the best parts of previous games and improve upon them while introducing new elements to make Diablo IV unique. We don’t want to create an exact copy of Diablo II or Diablo III. It’s worth calling out that, on this subject, there was a lot of mixed feedback and differing opinions, and we acknowledge that means there’s no single approach that everyone in the community will agree on.

That said, thanks to your feedback, we have some potential changes we’re actively discussing internally regarding itemization that we’d like to share with you today. Again, we feel it’s important to stress that this is very early design, and we’re sharing this with the community far sooner than we ever have before. There will be problems with these ideas we’ll have to iterate through, and what’s presented below is almost certainly not final. The reason we’re sharing this so early is because we want to involve the community in our process and learn as much as we can from your feedback, as soon as possible.

We went through so much great community discussion, including a fair amount of conflicting feedback, and we’ve had dozens of hours of discussion on this topic. We were left with two major takeaways. First, item affixes should be a meaningful part of character power. Second, they should create interesting choices when deciding which items to equip. Our previous focus was on making each affix geared toward specific builds, so that the “perfect item” would vary depending on the build you were pursuing. We still like this overall direction, but we understand it can also feel like your choices are limited because you end up chasing a list of “best-in-slot” items.

Here are the changes we’re considering:

These new stats can appear as affixes, such as +15 Angelic Power. In addition to providing the above-stated benefit, we want these new stats to also act as pre-requisites for empowering certain other affixes. If you don’t have enough of a specific power, you can still equip the item, but you may not benefit from an affix linked to that power.

Here are a couple of work-in-progress examples to better illustrate what these affixes do (again, none of this is final and could change considerably): 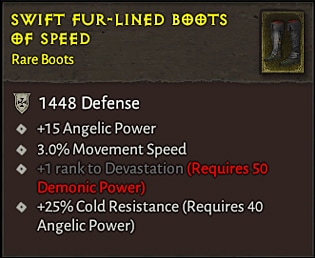 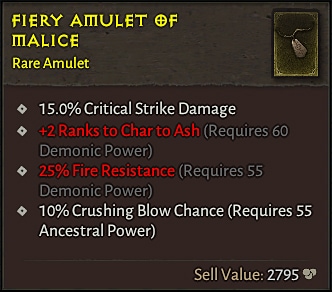 Each of the three Powers will have a list of affixes that are attuned to it, so depending on which stats you care about, you might want to focus on Angelic, Demonic, or Ancestral Power. In the examples above, you would need 50 Demonic Power to get an additional rank in the Devastation skill, 55 Demonic Power for 25% Fire Resistance, or 60 Demonic power for an additional 2 ranks in the Char to Ash skill. If you wanted to build around Crushing Blow, you’d need to stack at least 55 Ancestral Power instead, while 40 Angelic Power would be required to gain 25% Cold Resistance.

We think these changes will address those two main takeaways pretty well. Legendary powers should no longer completely dwarf the strength of your affixes, and the affixes themselves provide more interesting choices because their strength depends on how much of the relevant Powers you’ve accumulated on the rest of your gear. You might find an amulet with the perfect stats for your build, but some of its Affixes may require Demonic Power when you’ve previously focused on Ancestral. Maybe your current amulet is the primary source of your Ancestral Power, so equipping a new amulet would mean potentially making sacrifices elsewhere.

With this system, it will be easy to identify items with good stats, but it will take some thought and planning to decide whether the item is good for your build. The best items for your character will really depend on what you currently have and how you’ve built that character, making it more difficult to just look up the right answer online.

At the same time, we think this system keeps items approachable, even if you make suboptimal itemization decisions. You may be weaker, but doing so won’t completely break your character. We can also introduce this mechanic gradually and naturally as you level, rather than making it a requirement to understand at the beginning.

Based on your feedback, we’ve changed Attack to only be found on weapons, Defense to being only on armor, and we’ve removed both Attack and Defense from jewelry entirely. The goal here is to better embrace the fantasy of each type of item.

We like the Attack and Defense stats as a way to convey power progression on items. A core part of any ARPG is the quest for more power. Just as we have skill ranks, talent trees, character levels, and so forth, Attack and Defense allows us to reflect your power growth in items as well.

To be clear, Attack/Defense is not the end of the story of an item’s power, but it does fulfill the “easy to learn, difficult to master” design philosophy by giving players a broad sense of whether the item is an upgrade. Players who are optimizing their character will still need to take the additional affixes on an item into account, as their benefit to your build can outweigh the raw Attack or Defense of an item. Solely picking your items based on Attack and Defense will almost never be the optimal way to play, but it does provide a good starting point for newer players.

It’s important to reiterate here that items are just one part of a character’s overall power. Our goal is to spread out power across different sources, including skill ranks, your character’s level, talent trees, items, and the endgame character progression system (which, like everything else, is still in development).

In our last post, we mentioned that we were looking at some potential changes to Ancient items based on your feedback. We are going to remove Ancient Legendaries from the game in their current form entirely.

Our newest proposal hits a couple different feedback points: addressing the usefulness of Rare (Yellow) items as well as increasing the depth and complexity of player gear choices in the endgame.

We will be introducing a new type of consumable item (which we haven’t yet named). This item would be earned by killing monsters, just like other items. It would have one random Legendary affix on it, drops only in the late endgame, and can be used to apply that affix to any non-Legendary item.

This means a few things:

We want to remind you one last time for good measure that none of this is final—we haven’t even tried most of this in a working build yet! We’d love to get some constructive feedback on these approaches, as well as the general direction we’re headed for itemization. We’ve never shared this level of detail this early before, but we look forward to reading what you have to say.