Sanctuary Freezes Over During the Hellish Holiday Event

We wish you one Hell of a holiday season!

Winter has befallen Sanctuary—and with it, a fresh layer of demonic trickery has coated the land. During this time of year, mortals exchange gifts to spread holiday cheer, but the Burning Hell’s helpers have thwarted this celebration by stealing all the gifts for their own nefarious purposes.

Restoring this time of glee rests squarely on your shoulders, Nephalem. Can you save this Hellish Holiday? 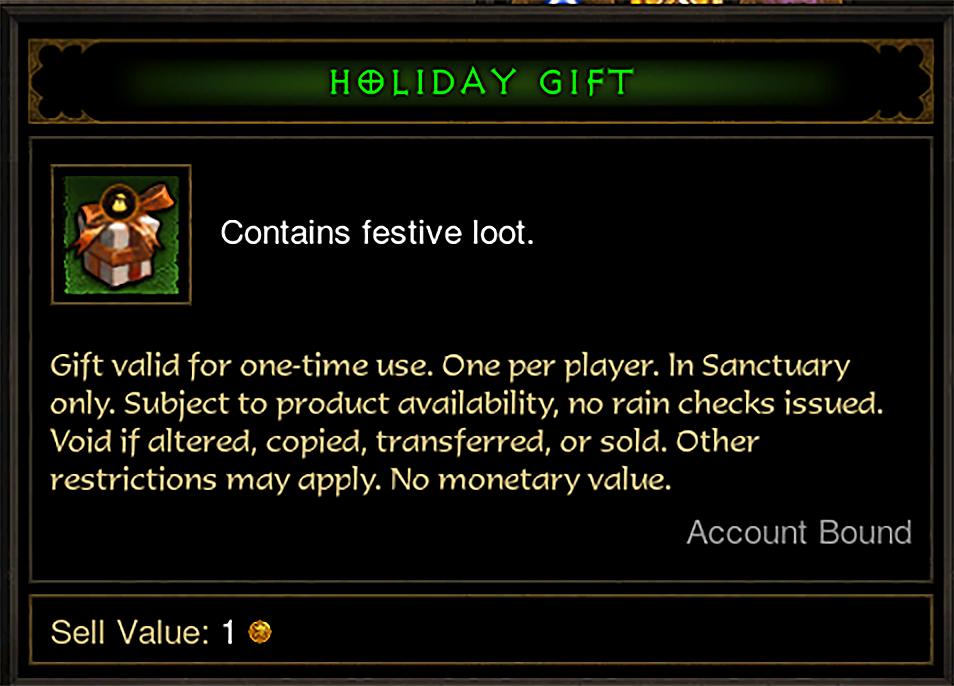 From December 16, 11:00 a.m.–February 5, 11:00 a.m. PST, you’ll need to put the sword to Treasure Goblins and Greater Rift Guardians for a chance at recovering a Gift. Because of their hardiness, Greater Rift Guardians have an increased chance of dropping a Gift. Sanctuary’s denizens were especially generous in their offerings to one another this year, ranging from helpful resources to rarefied gear—here is what you can potentially receive from any recovered Gifts:

Each Gift will always contain the following items:

Each Gift could also contain one of the following items:

Developer’s Note: If a player owns any of the Pets or Wings from above list, they will be unable to receive a duplicate of them from any recovered Gifts. Otherwise, enjoy your lumps of coal!

May your holidays be full of demons to slay!
-The Diablo III Team