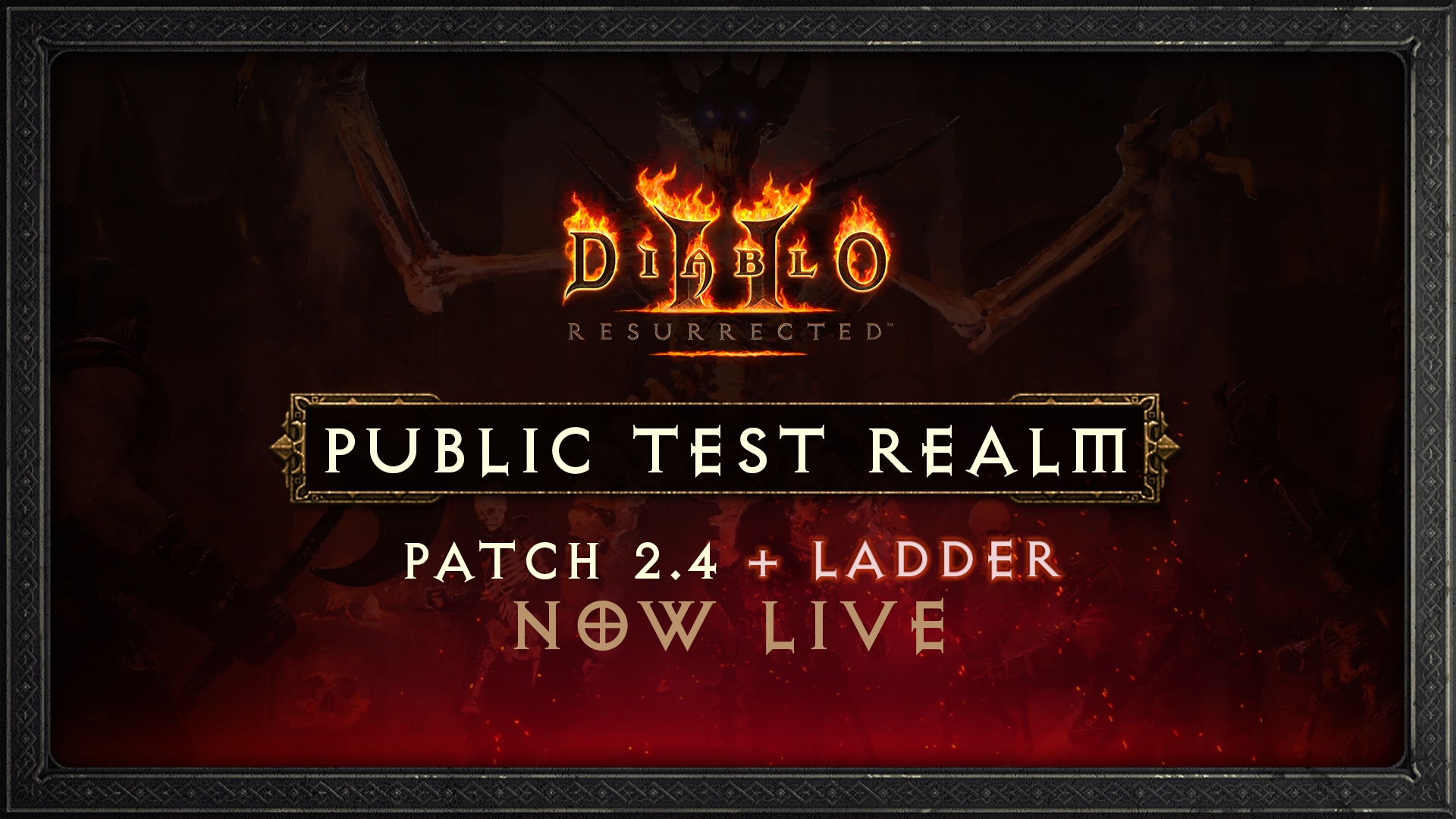 3/9 Update: The PTR has ended. Thank you all and see you soon.

The upcoming PTR 2.4 test goes live on March 2 and will focus on Ladder functionality, Uber Diablo updates, additional balance changes, and bug fixes since our previous PTR. This is a continuation of our previous PTR, so any balance changes mentioned here are on top of the changes that were already live as of our last PTR. You can refresh yourself on the specifics of changes we've made so far here. We look forward to your participation in the PTR and hope players continue to share feedback. With your help, we can continue the legacy of making Diablo II: Resurrected the ARPG we all cherish.

Heroes of Sanctuary. Thank you for your outpouring of feedback on some of the first changes made to Diablo 2 in over a decade. We return to you with adjustments to those changes based on your thoughts, opinions, and survey answers. With this round of changes, we spent most of our efforts on the areas where the feedback was overwhelmingly unified as well as some areas where we may not have pushed hard enough for a meaningful change. We would love to hear more of your thoughts on these iterations.

As we progress in this PTR, please be aware there may be periodic maintenances, outages, hotfixes, or minor patches. All the changes implemented in this PTR are not in stone. We want to gauge reception and feedback on these changes before we make them final for Live. We encourage our PTR participants to explore and play the following content updates:

Offline/Single Player Note: Patch 2.4 introduces changes to character save data as a result of our new balance changes. A new folder has been created to support players testing offline content. Players will now be able to test classes from previous versions of Diablo II: Resurrected by importing those character files into this folder.

Please leave your feedback in the PTR Feedback forum. If you discover any bugs, please report them in the PTR Bug Report forum. So, without further ado, let’s dive into these new changes!

We are very excited to invite you all to test the Ladder functionality on the PTR. The Diablo II: Resurrected Ladder launch represents an optional ranked competitive system of the game through a series of modes available to select from with a fresh Ladder-specific character(s). Each mode will have their own leaderboard where players compete to strategically gain experience within a limited timeframe while having access to Ladder-specific content. When the Ladder season ends, leaderboard rankings will reset, transitioning characters to non-ladder mode, giving players an opportunity to store their hard-earned treasured loot as a new Ladder season awaits them.

For PTR test, we would love you to focus your attention on the presentation of the Ladder in the front end and the way the new balance changes impact Ladder play.

The way that players summon Uber Diablo in Diablo II: Resurrected today will remain the same as it was first introduced in v1.10, by selling Stone of Jordan rings. However, we have made some changes to how and where that progress is calculated that we hope will make the experience better for the entire community. We’re eager to hear your feedback!

Uber Diablo progress for each game type will now be kept by the regional database. When the threshold is met by selling enough Stone of Jordan rings, Uber Diablo will spawn for everyone in the same region, not only those on the same server instance.

Progress towards Uber Diablo is now tracked per game type. Giving us a total of 8 progressions being tracked. Those being Classic, Classic Hardcore (HC), Classic Ladder, Classic HC Ladder, Expansion, Expansion HC, Expansion Ladder, Expansion HC Ladder. Given this change, we have added new messaging for players to help them anticipate when Uber Diablo may spawn. This messaging will be sent out to all players in the region at certain tiers of progress, and can be manually checked by using a /uberdiablo chat command. We hope these changes allow more players to get to experience the true terror that is Uber Diablo.

Developer Comments: We saw an opportunity to make leap attack more viable by changing to fantasy to make the leap itself an attack. By doing this we feel like the combat viability of the skill will increase while still preserving it as a movement skill. We feel that this change paired with the animation changes we made to it brings the leap attack more in line with the fantasy and feel we want it to have.

Developer Comments: Barbarians run out of throwing weapon quantity far too quickly. Adding chances to not consume as well as chance to replenish will allow a throwing barbarian to be viable without having to return to town frequently.

Developer Comments: The restriction of the Druid being allowed only one type of summonable at a time has restricted the viability of this build and has hampered the fantasy of a Druid Summoner from living up to its full potential. We feel that a druid being able to summon all of his allies at once will make for a more interesting and fun playstyle.

Developer Comments: We've debated on the best way to bring shapeshifting Druids forward. After much discussion, we are going to commit to the modern (Balance PTR 1) way of calculating attack speed for the wereforms. We have rebalanced the werewolf to allow that form to reach even faster speeds than it could previously. As for werebear - we want to deliver on the fantasy of a powerful, unstoppable, killing machine. We've introduced uninterruptible attacks and skills, as well as increased damage and defense. While this will change the way players have played the Werebear in the past, we feel like it is more in line with the intended fantasy. For players who loved their fast werebear builds, we’ve added attack speed bonuses to Maul, but we also hope the new Werewolf changes will offer them the same style of play, as it is now the faster form.

Developer Comments: We've heard your feedback that golems don't feel valuable enough as skills. Without giving them a larger overhaul, we hope these changes will make them feel powerful enough to use more often.

Fist of the Heavens

Developer Comments: After seeing feedback to the removal of area damage scaling in our PTR Balance Patch, we agree that it is an interesting mechanic that is worth trying to balance properly. We’ve reworked how the proximity damage bonus is calculated while retaining the 200% maximum possible damage bonus.

Developer Comments: Our hope with these changes are to continue to bring the non-Act 2 mercenaries up in viability so that they see increased usage, and to push each one further into their class archetype by allowing them to use class specific equipment.

To participate in the public test, you must have a Diablo II: Resurrected game license attached to a Battle.net account in good standing (i.e. one that hasn't been suspended or banned). In addition, you will also need to download and install the Blizzard Battle.net desktop app if you have not already done so.

Step 2:Navigate to the Diablo II: Resurrected tab on the left-hand menu.

Your PTR account will be created automatically if you do not already have one. The PTR is available in all supported languages, and accounts from all regions are eligible to participate. For additional assistance with installing and launching the PTR, click here.

Our team is so grateful for your support. Last year we launched Diablo II: Resurrected, now it’s 2022 and we’re stoked to implement these new changes into our game. Thank you for playing and thank you for your continued collaboration.