Salutations. We rejoice in your return, adventurer.

This Diablo Immortal Content Update introduces the new Character Transfer feature. Beginning after the maintenance period, players may move one of their characters from their current server to a new server. Your first Character Transfer will be free, but additional transfers can be purchased.

Since this is an important decision, we wanted to alert you that some servers will be merging shortly after our next Content Update in two weeks. This change is being made so players will have an easier time finding other players to party up with regardless of the server they play on. To ensure you can make an informed decision on which server to transfer to, here is a complete list of all servers that will merge:

All servers that are merging have been broken into groupings of four. Once Server Merge goes into effect, you will continue to log into your same server, but will notice you can now play Diablo Immortal with players on any server in your grouping. Do keep this in mind when considering which server to move to using the new Character Transfer feature.

As with previous Content Updates, there will be server maintenance starting on October 25, from 5:00 p.m.–7:00 p.m. PDT for Oceania, China, East Asia, Southeast Asia, and Europe Servers, and on October 26 from 1:00 a.m.–3:00 a.m. PDT for servers in the Americas. After the maintenance has concluded, all items mentioned below will be live—specific dates for any content going live afterward are provided below. 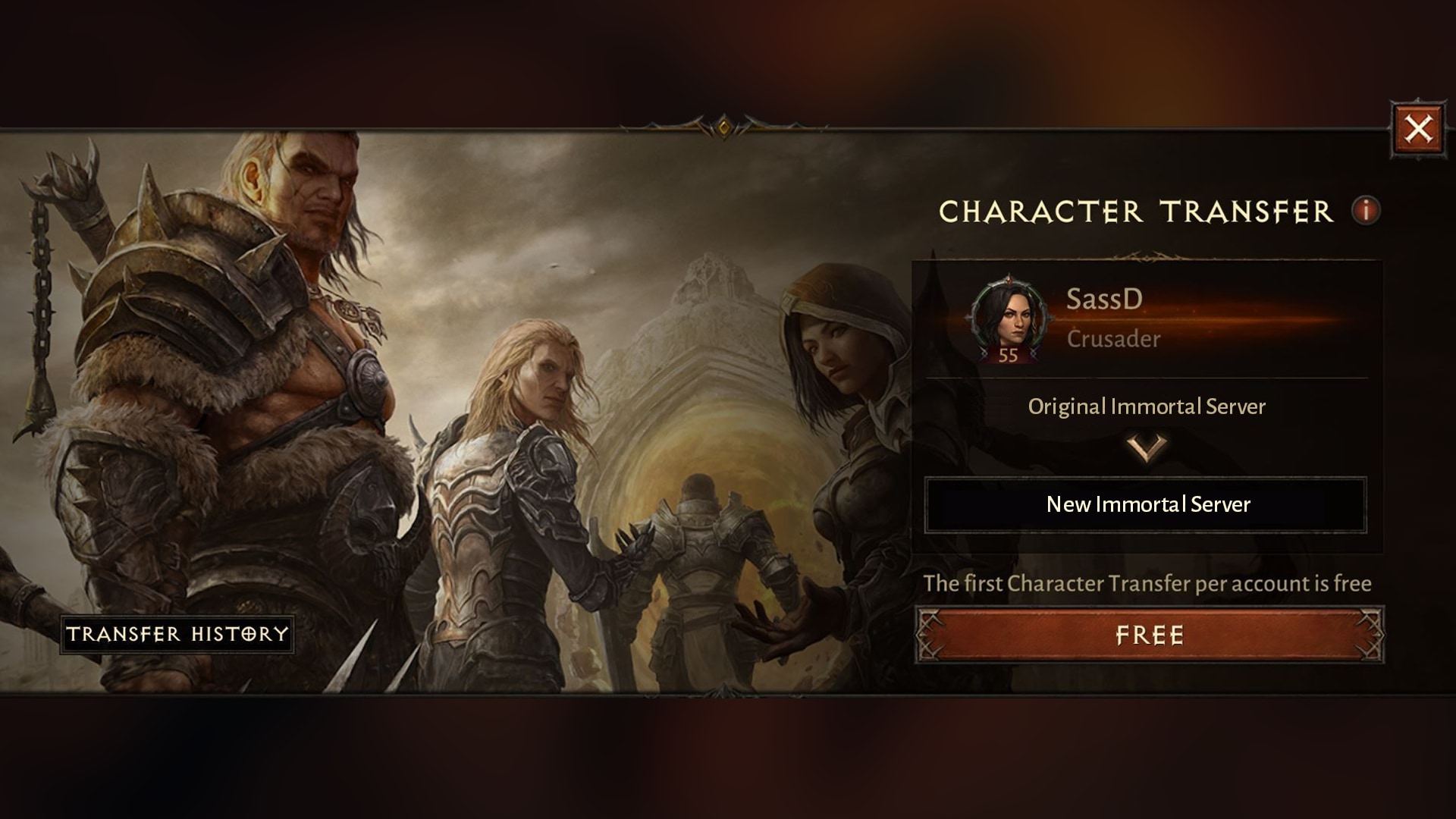 The ability to transfer your character from one server to another has been among the top requested changes from our community, and we hear you. Diablo Immortal is not only a game about slaying demons to obtain powerful loot, but also about having meaningful experiences alongside other players in Sanctuary.

It is our utmost pleasure to announce that players may now transfer from one server to another. Both current players and new players will receive one free Character Transfer to use as they wish. Whether it be to vanquish darkness with friends on another server, to make new friends beyond your current server, or even for the sake of changing things up—we want to empower players to enjoy the game on whichever server feels like home to them.

Here’s how Character Transfer will specifically work for you:

Developer’s Note: This restriction has been added to uphold the integrity of transactions in Wynton’s Grand Market and ensure the continued security of your account. We understand this might be inconvenient but hold player safety to the highest standard.

Once you have successfully transferred your character to a new server, you’ll notice a few adjustments have been made to them:

*We reserve the right to discontinue your one free Character Transfer at any time without notice. 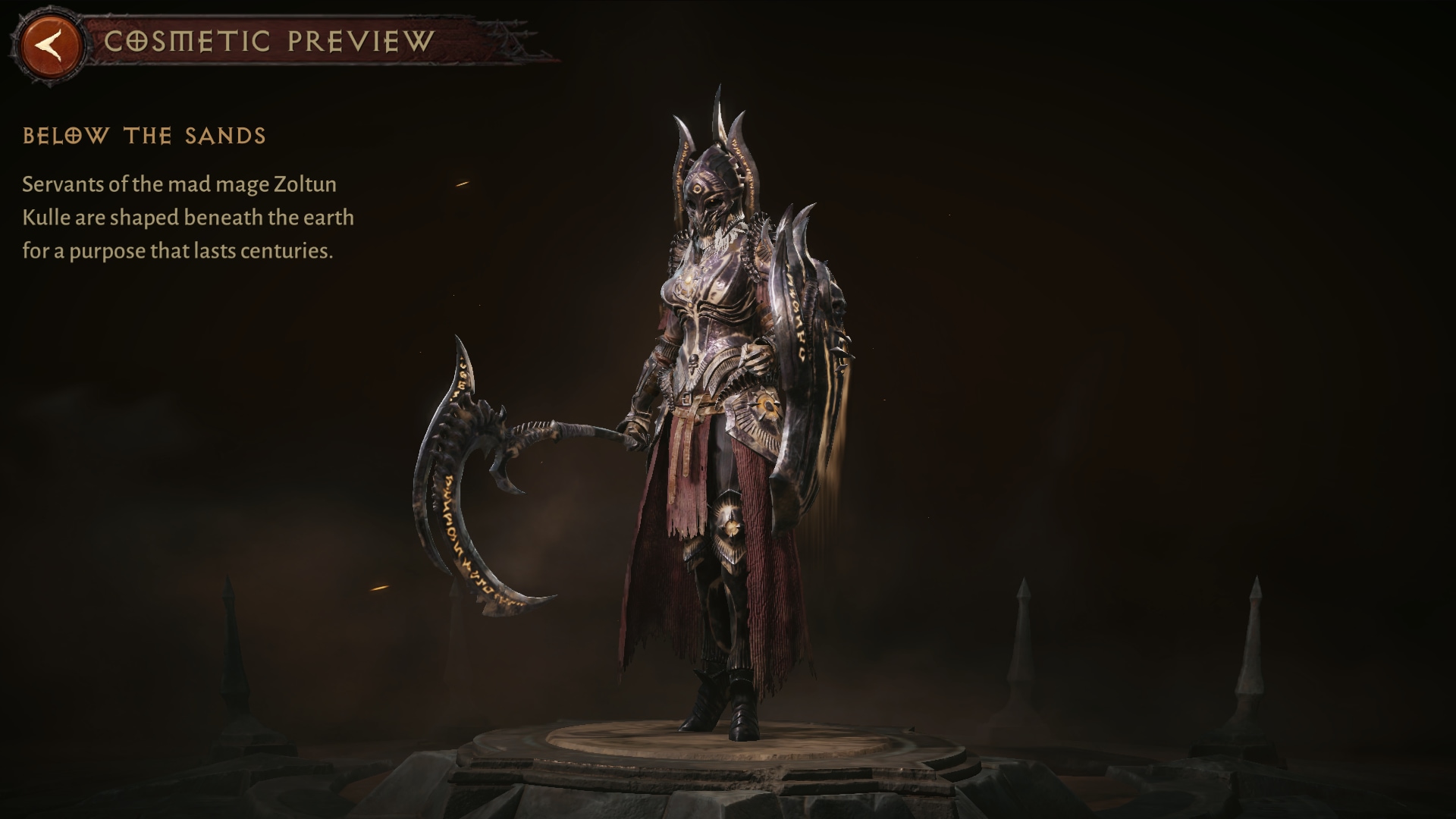 Zoltun Kulle, known as one of the most powerful mages in Sanctuary’s history, crafted the first of his libraries alongside a series of unique constructs he built to endure the shifting sands. His primary focus was the physical strength and obedience of the constructs, not their adaptability—and thus, years later, they still continue their tasks, despite the library nearly crumbling around them.

A new Battle Pass devoted to the sands has shifted into Diablo Immortal, and with it, Season Six begins on October 27, at 3:00 a.m. server time. The Below the Sands Battle Pass hosts 40 ranks worth of challenges and rewards, such as Legendary Gems, Crests, Hilts, and more.

The Season Six Battle Pass only runs until November 24, at 2:59 a.m. server time—begin slaying demons and climbing your way through the ranks today! 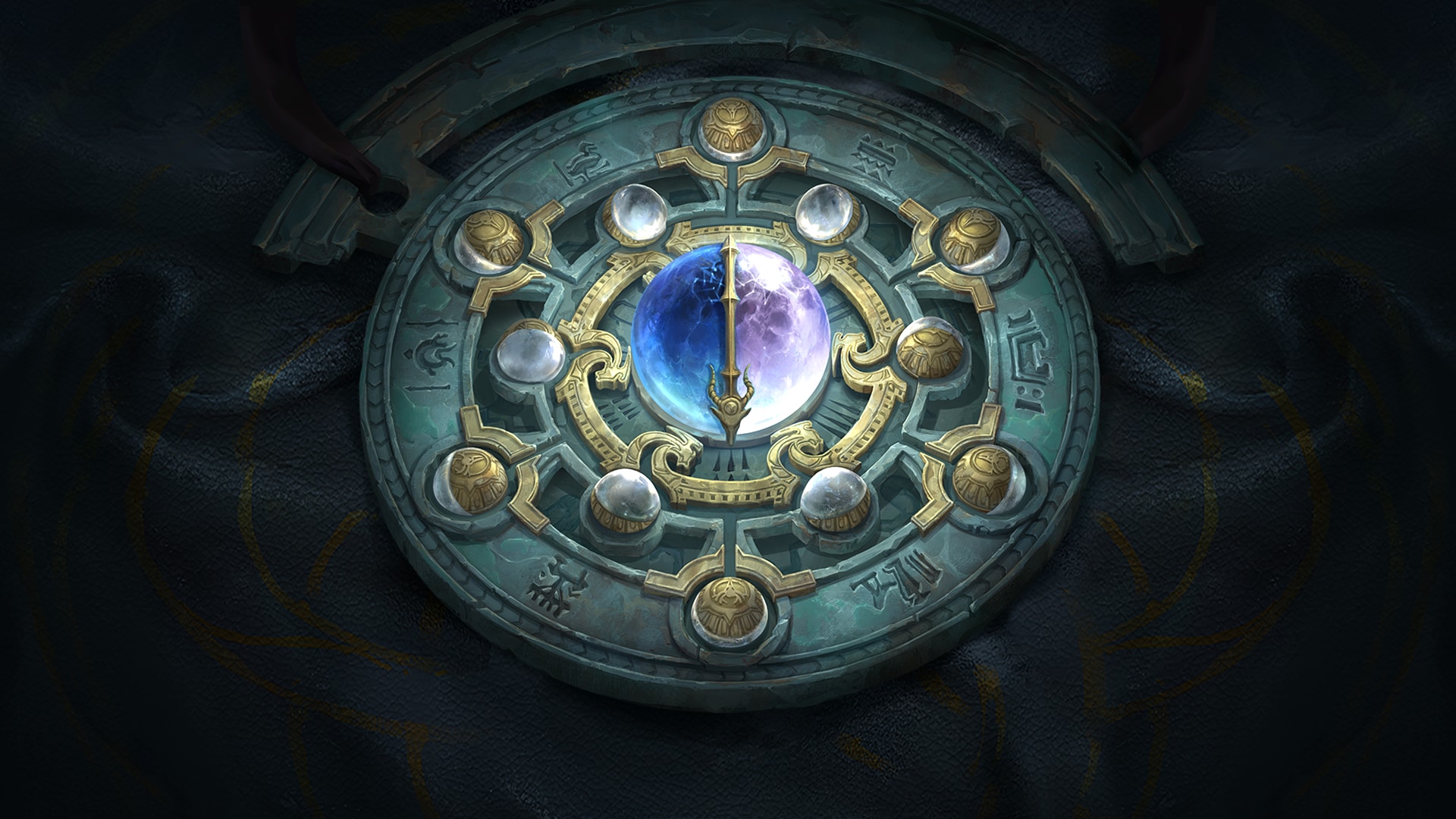 Despite your best efforts to sate the moon’s hunger…it confoundingly demands more blood! The moonlit path you’ll take to heed your lunar overlord’s howl for sustenance is ready to be traversed. Players can complete up to three tasks a day starting November 3, 3:00 a.m.–November 7, 3:00 a.m. server time. Through completing tasks, you’ll gain Astrolabe Power—the power can be used to draw one of two types of blessings with unique benefits from the Astrolabe.

Once you’ve racked up a handful of Moonslivers by purging demonic hordes from dungeons, visit the Hermit’s Collection located within the Hungering Moon event page to trade your Moonslivers for lunar-laced rewards of your choice, such as Telluric Pearls, which will be offered as a reoccurring reward in many of our future events. Be sure to collect 12 blessings in total to earn The Moon’s Regard—a bounty of 120 bonus Moonslivers meant for the most exemplary devotees. 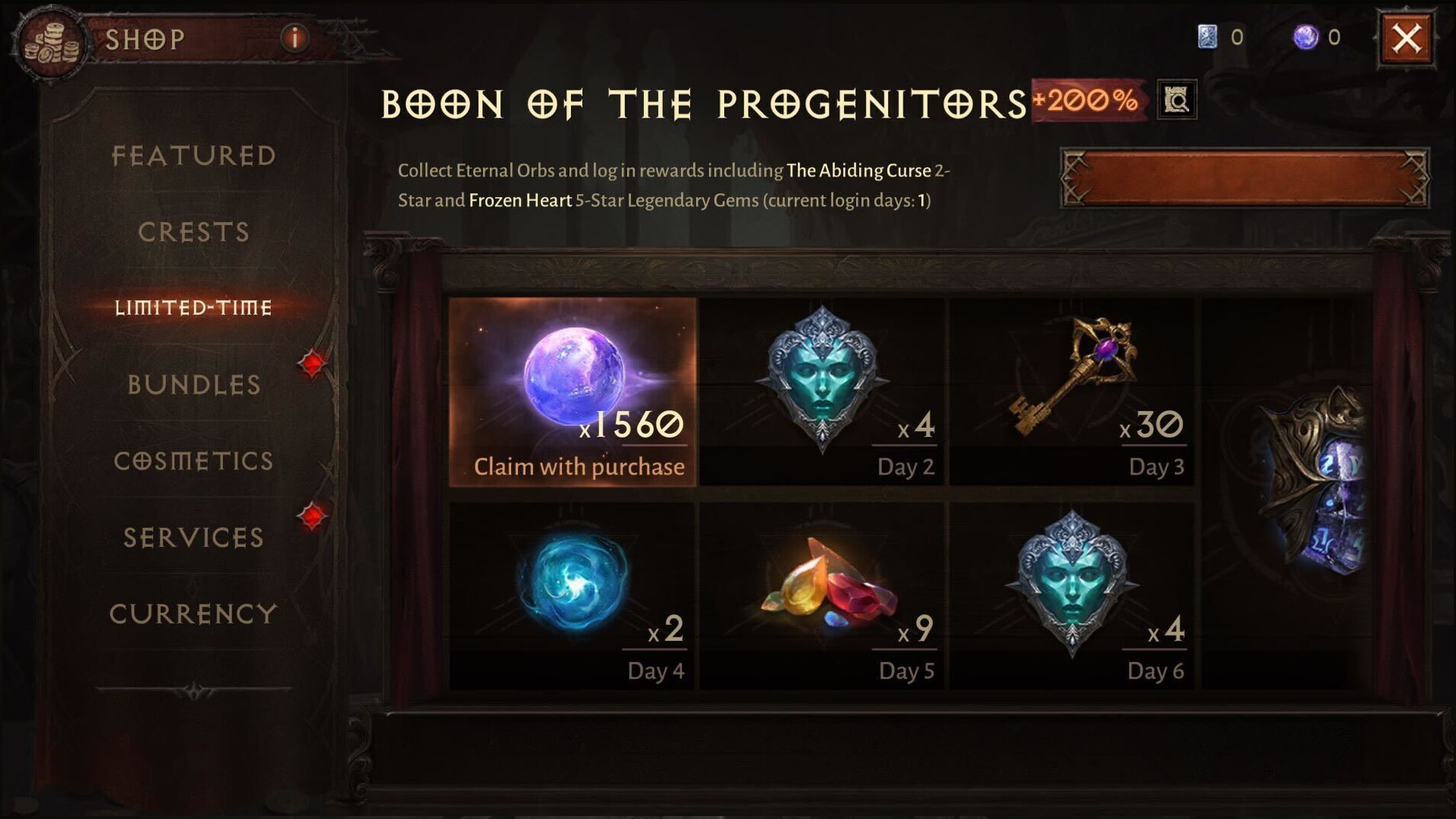 Step right up, adventurer! The opportunity to bolster your Legendary Gem collection has just arrived. The Boon of the Progenitors limited-time bundle provides you with a hefty sum of Eternal Orbs upon purchase and 14-days’ worth of login rewards to collect, including two powerful Legendary Gems: The Abiding Curse and Frozen Heart.

This bundle is only available to characters level 40 and above. Once purchased from the in-game shop, you’ll have 21 days to claim all daily login rewards. Be sure to log in daily to claim all your rewards within the given time as any unclaimed rewards will be lost. The Boon of Progenitors bundle will be available in the shop from October 26, 3:00 a.m.–November 16, 3:00 a.m. server time.

Our newest batch of Legendary items were designed to complement the Gloomguide's Prize set. Many of the affixes will create new ways to activate the set’s bonuses and we are looking forward to seeing how players harness these new powers and incorporate them into their builds.

Developer’s Note: As we continue to develop Diablo Immortal, we want to make sure that you feel adequately rewarded for all the different activities that you put your farming time into. We observed that many of our dungeons were not granting as much overall experience to players when compared to other activities, such as open-world farming and Elder Rifts—so, we have boosted the experience rewards of all dungeons to bring them more in line.

Blessing of the Worthy