From October of last year to early January, the Closed Beta was in full swing! Test participants had the chance to play a breadth of new content and features, including the Necromancer class, Cycle of Strife Updates, Set Items, Helliquary Updates, and Controller Support. Whether you participated directly in the playtest, sent us valuable feedback, or watched the game from a livestream, your input has been greatly appreciated. Let’s join our Game Director, Wyatt Cheng, and Senior System Designer, Kris Zierhut as they explain our learnings, philosophies, and planned improvements!

Hi everyone, my name is Wyatt Cheng, I'm the Game Director of Diablo Immortal. Following this playtest, our team continues to make substantial progress towards getting the game into everyone’s hands. We’re still planning for release in 2022 and today we’d like to share what we learned from Closed Beta, leading to critical changes around the social aspect of the game, raids, in-game purchases, a Cycle of Strife overhaul, and more. To kick things off I'll take you through some General Updates we're making, following the Closed Beta. Let's jump in!

Diablo Immortal is an MMO (Massively Multiplayer Online game), and an important part of any MMO is the friendships you form and the sense of community you belong in. Our game’s social communities start with parties, and we want to promote party formation between like-minded players to complete shared goals.

Bounties were one system that led to a lot of group play, but also some challenges in beta. They’re repeatable, randomly-selected quests that you can complete in quick succession, earning bonus rewards for every four you turn in. During the Closed Beta, we received feedback that a lot of players who got assigned dungeon bounties felt like they were forced to group in order to complete them. Groupmates receiving that player often wanted to do multiple dungeon runs, and would be disappointed when a player immediately left the party after completing their bounty.

We'll be adjusting bounties so that they're exclusively solo, and we're looking into making the Shadows' Contracts more flexible in the future. We want to provide concrete incentives for grouping, but we also want to empower you to choose whether you want to play all-solo or all-group content.

We’re excited to see many of you enjoying the Helliquary—massive 8-player raid boss encounters that demand extra coordination to overcome.

Our intention is to release one new Helliquary boss every month, but in order to provide more granularity and a better sense of progression, we are going to also provide multiple difficulty levels for each boss. During beta, a number of you expressed feedback that the gap in difficulty between the bosses, Lassal and Vitaath, was too large; with this change, we think the Helliquary will remain rewarding to all types of players, but also close the difficulty gap for those who may feel too daunted to play this content.

We also heard lots of requests for better grouping, matchmaking, and raid management tools, and we’re happy to oblige! The raid UI in the Closed Beta was a first-pass implementation, and you can expect visual and functionality improvements in the future.

Our goal has always been to keep Diablo’s core gameplay, killing demons and getting gear, accessible to all regardless of whether players opt to engage with in-game purchases or not. Purchases in our game are completely optional and should not detract from your gameplay experience. During the Closed Beta, we received a lot of feedback on our Battle Pass and other in-app purchases.

We’re pleased that the Battle Pass is resonating well and many of you are finding the purchase to be a good value. However, we saw that the Boon of Plenty was not as well-received. We’re evaluating ways to improve the Boon of Plenty so it feels more valuable and worthwhile.

Lastly, we saw much frustration around Legendary Gems and their impact on alt-play in the Closed Beta. Reading your feedback, this system felt like it forced many of you to be committed to a single character, rather than splitting your focus across multiple characters. We are working on a solution for this concern, and it will be the focus of a future blog post. We understand that shareable purchased items or switching to alt characters feels underwhelming and we plan to resolve that at launch.

Last year, the community pleaded for controller support. We were happy to oblige, and the Closed Beta introduced a handful of compatible controller devices.

Our goal is for the controller's presence to be detected the moment the game is launched. We want to handle connecting and disconnecting your controller more seamlessly and make controllers work in all in-game menus.

Our intent with implementing Warbands was to encourage small, consistent groups of players to play together regularly. We wanted to provide you with a tool to find other like-minded players who share the same goals.

We are going to expand Warbands to be for groups of 8 players and we’re going to look at adding additional features to really make a Warband feel like a close circle of friends. We want to replicate the lucrative bonuses and incentives you already receive for running dungeons or Helliquary as a group for the Warbands system too.

To all of our Closed Beta test participants, thank you. We are grateful to have you with us on this journey as we work to make Diablo Immortal the absolute best it can be. Now I'm pleased to introduce our Senior System Designer, Kris Zierhut, who will share a comprehensive update on how we're improving Set Items, the Cycle of Strife, and World Paragon in Diablo Immortal.

Hi all, my name is Kris Zierhut, thank you for joining us as we continue to collaborate with you on how to improve the gameplay experience of Diablo Immortal. In the Closed Beta, we implemented a new end-game gear system to enable you to fill your secondary gear slots with Set Items. When you wore a sufficient number of items from the same Set, your character received an additional bonus. Most of you enjoyed the hunt for sets, but we’re excited to make more improvements to Set Items. We’re looking at adding new sets to the game, and we’ll also be doing a balance pass on the existing sets so they support and complement particular builds and playstyles.

An additional concern we heard was that many of you completed a set but didn’t always equip it. Some of you found the set sometimes wasn’t worth wearing, because some of the pieces were found at such a low Paragon level that the loss of stats on that item were not sufficiently offset by the set bonus to make it worthwhile. We’re exploring improvements on this front and will make changes before launch.

The past couple of playtests we’ve made significant changes affecting the fight for the Eternal Crown. And we’re not finished yet. The Cycle of Strife will be receiving a number of changes, not all of which will be disclosed in this blog. However, there is one key area we did want to focus on in this post.

The core structure of the Cycle of Strife will no longer revolve around Dark Houses and a final Immortal group. Instead, the Cycle of Strife will be based on Clans competing with one another. To enrich the social experience, we’re empowering your Clan with the ability to become a Dark Clan. Forming Dark Houses wasn’t very good for long-term social relationships; when every end of a cycle occurred, it caused a jarring upheaval to your social system and network of players. Now, after a player's clan is made, that clan’s members will join the Shadows together. If that player’s Dark Clan succeeds in besting the other Dark Clans and overthrowing the Immortals, then that winning Dark Clan will become the Immortal Clan. Players in an Immortal Clan will stay together as a unit and can invite up to two other Dark Clans to become Immortal Allied Clans. When the Immortals’ reign ends, as all reigns must, the Immortal Clan will return to being a normal Clan as the Cycle begins anew. This new design gives Clans more meaning and allows you to form long-term friendships with other players. 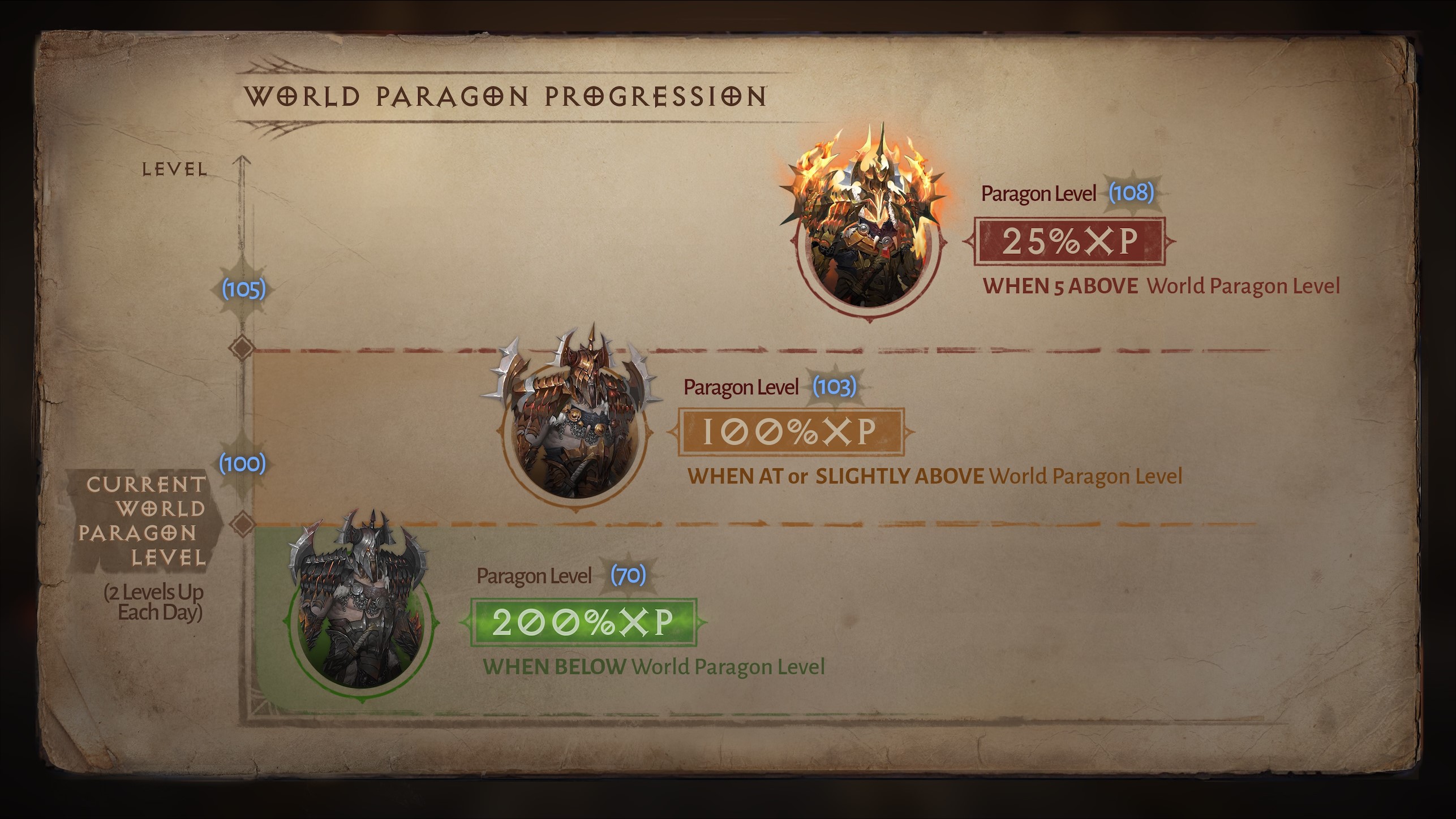 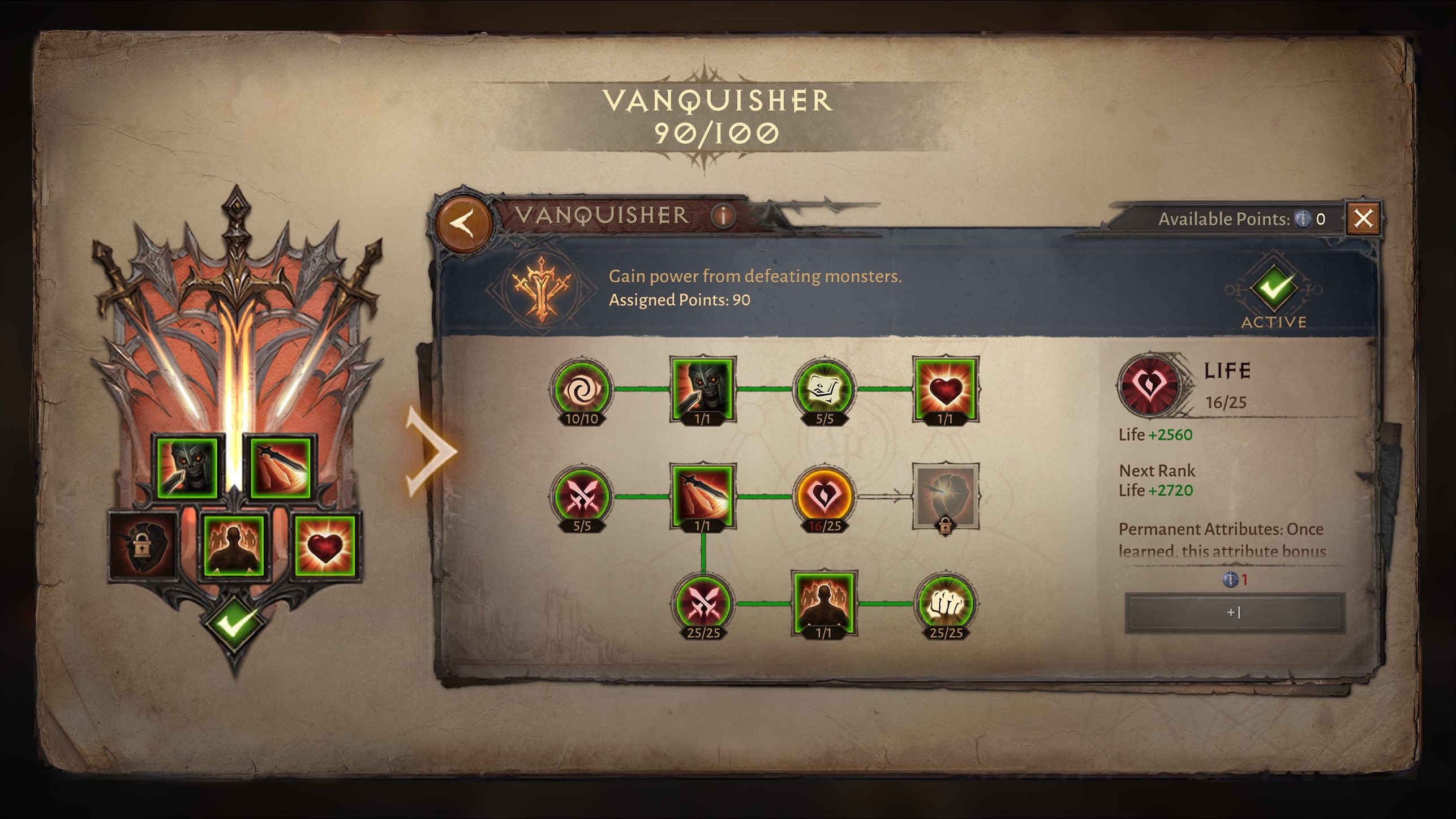 Following the Closed Beta, we’ve revisited the World Paragon system. As Diablo Immortal is an MMO, we want a compelling social experience, where you can group up every day to slay demons with your friends. We also want no limits on your playtime; no “energy” systems or similar mechanics to slow down your fun. But that leads to a challenge. We want to make sure friends who play different amounts of time each day can still always play together as a team, instead of the strong players “carrying” the weaker ones. In our Closed Alpha we tried putting a weekly cap on experience. That approach had its flaws and didn’t resonate with our test participants, so we removed it. For the Closed Beta, we introduced a new “catchup” system, World Paragon, intended to keep friends from getting so far apart in power that they can’t play together, and we’re improving it further for launch.

Once you reach max level in Diablo Immortal, you begin earning Paragon Levels, which improve your loot and let you progress along Paragon Trees, making your character more powerful and customized.

Item salvage is a critical part of item progression in Diablo Immortal. It’s used to increase the rank of your items, adding additional stats and affixes. When we applied World Paragon experience penalties to salvage received, it led to players in the Closed Beta avoiding experience: not picking up XP orbs dropped by Elite monsters, or completing quests but not turning them in. This was bad, so we are reverting the World Paragon salvage modifiers. You'll be able to gather items as long as you like, and Paragon Levels earned will no longer penalize how much salvage you receive.

However, we still need to slow down how far ahead players can progress by playing the game more so friends don’t get split up by character power. Our current plan is to increase the salvage materials needed to advance items at very high ranks. This will allow all players to reach rank sixteen Legendaries, but only the truly dedicated players will reach even higher ranks. Very active players will still be more powerful from higher item ranks and have more choices of Legendary and Set items, but they won’t get so far ahead that they can’t play with their friends.

We believe this revised World Paragon system will help you play together with your friends, and also play as much Diablo Immortal as you want.

The community’s feedback and engagement has been incredible. We hope our players like and understand these changes, and we can’t wait to get this game in your hands!

The updates highlighted above do not encapsulate the full plethora of changes and updates we’re working on; but we wanted to share with you some key touchpoints that many of you had feedback on. To our Closed Beta participants we can’t say this enough, thank you! Your feedback is so valued by our team.

As we move forward, we implore you to continue sharing your impressions and feedback on your experience of Diablo Immortal. Your collaboration is critical in helping us craft a Diablo experience we all expect. Please feel free to share your thoughts on the r/DiabloImmortal subreddit or across our other channels. We appreciate you joining Kris and I as we highlighted these changes and updates in this blog post. Please stay tuned, as we have much more to share and explore in the coming months.