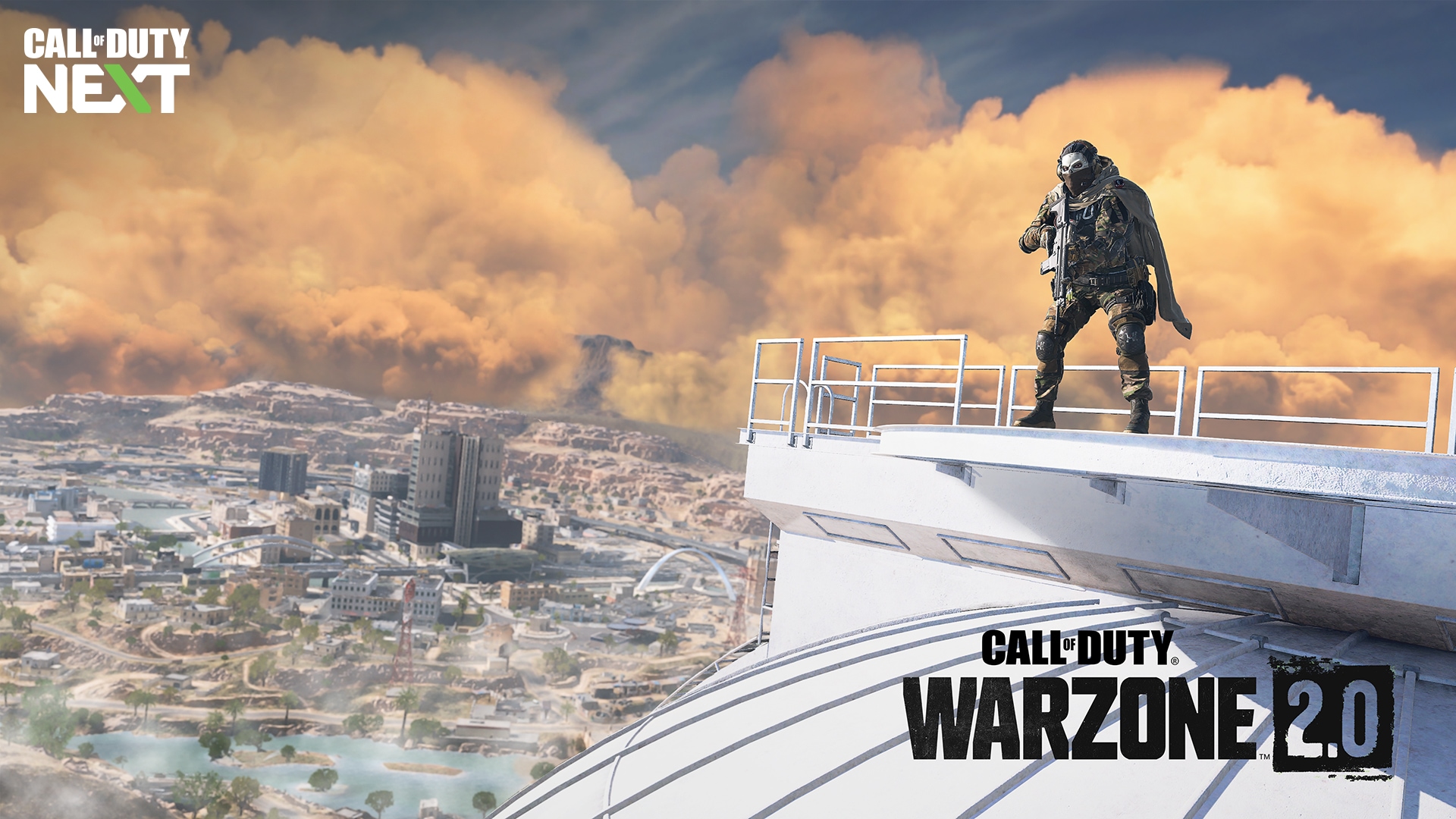 With over 125 million players dropping in to play the original Call of Duty®: Warzone™, and over 200 streamers and content creators playing an early Alpha version of Call of Duty®: Warzone™ 2.0 at the Call of Duty®: Next event, the first official intel has dropped regarding this massive, free-to-play Battle Royale experience featuring a huge and incredibly detailed new map, a host of innovations, and many more details we plan to share between now and November 16, when Call of Duty: Warzone 2.0 is officially launched – free for everyone – as part of Modern Warfare® II Season One.

Right now, here’s recap of what was shown at Call of Duty: Next:

ATTENTION! The following briefing represents only the first wave of intel related to Call of Duty: Warzone 2.0 and is by no means exhaustive. Look for a number of additional intel drops to come! In addition, the original Call of Duty: Warzone is continuing on, and we’ll have more information to share in the weeks ahead.

The Biggest Call of Duty: Warzone Map Ever: Welcome to Al Mazrah!

Where are we dropping? 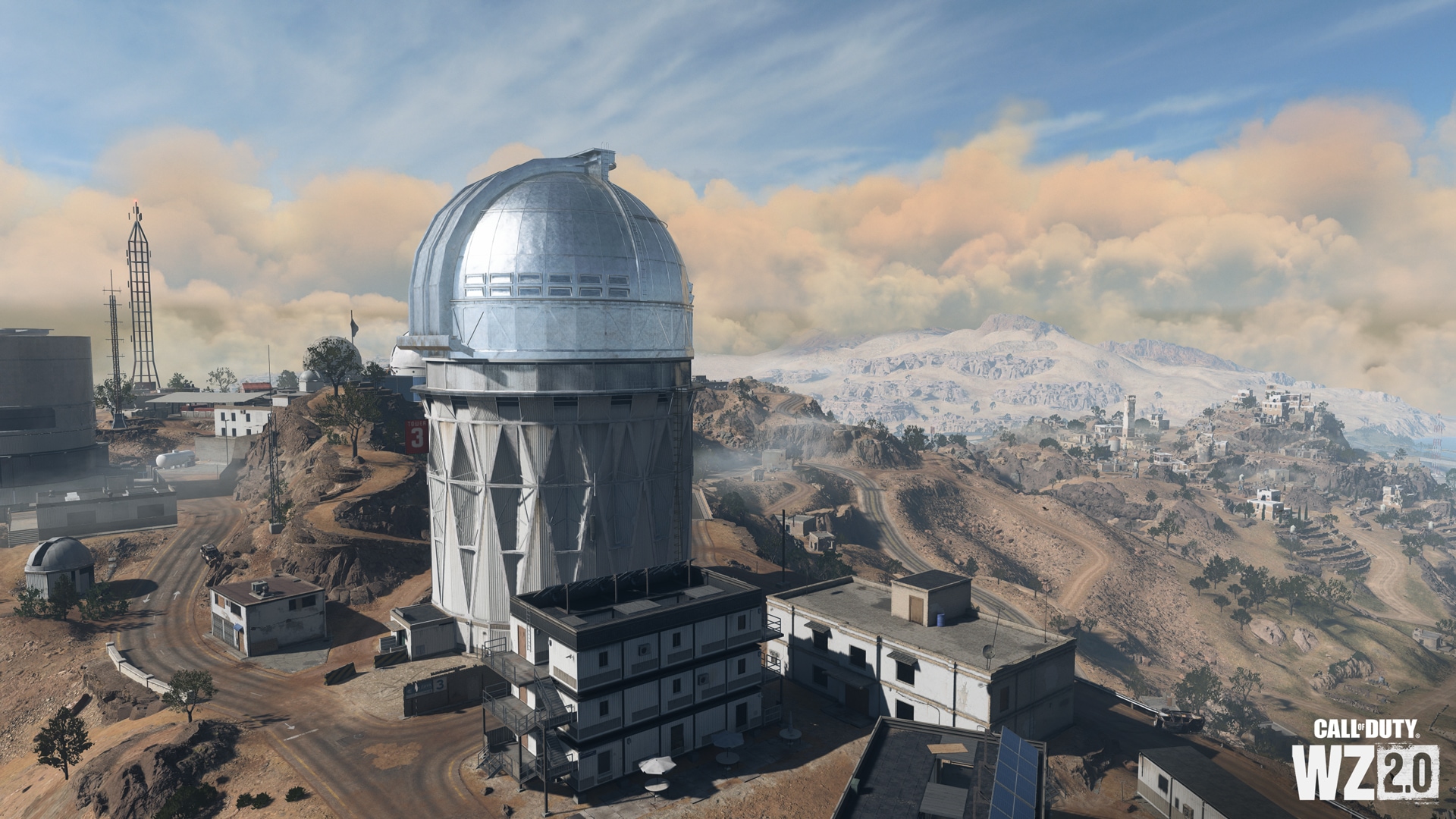 Meticulously crafted and polished by a host of developers across multiple studios, offering distinct and diverse geography never experienced before in Call of Duty: Warzone before, this brand new map is immense, dynamic and rewarding, and built literally from the ground up with the emphasis on loading up your favorite custom weapon, dropping in, exploring the vast landscape, and having a hell of a good time doing it.

In fact, Al Mazrah is so expansive, there’s a dedicated blog giving a first look and overview of the major points of interest, including hints on [REDACTED] locations for veteran players. Read it here.

A True Extension of the Modern Warfare II Universe 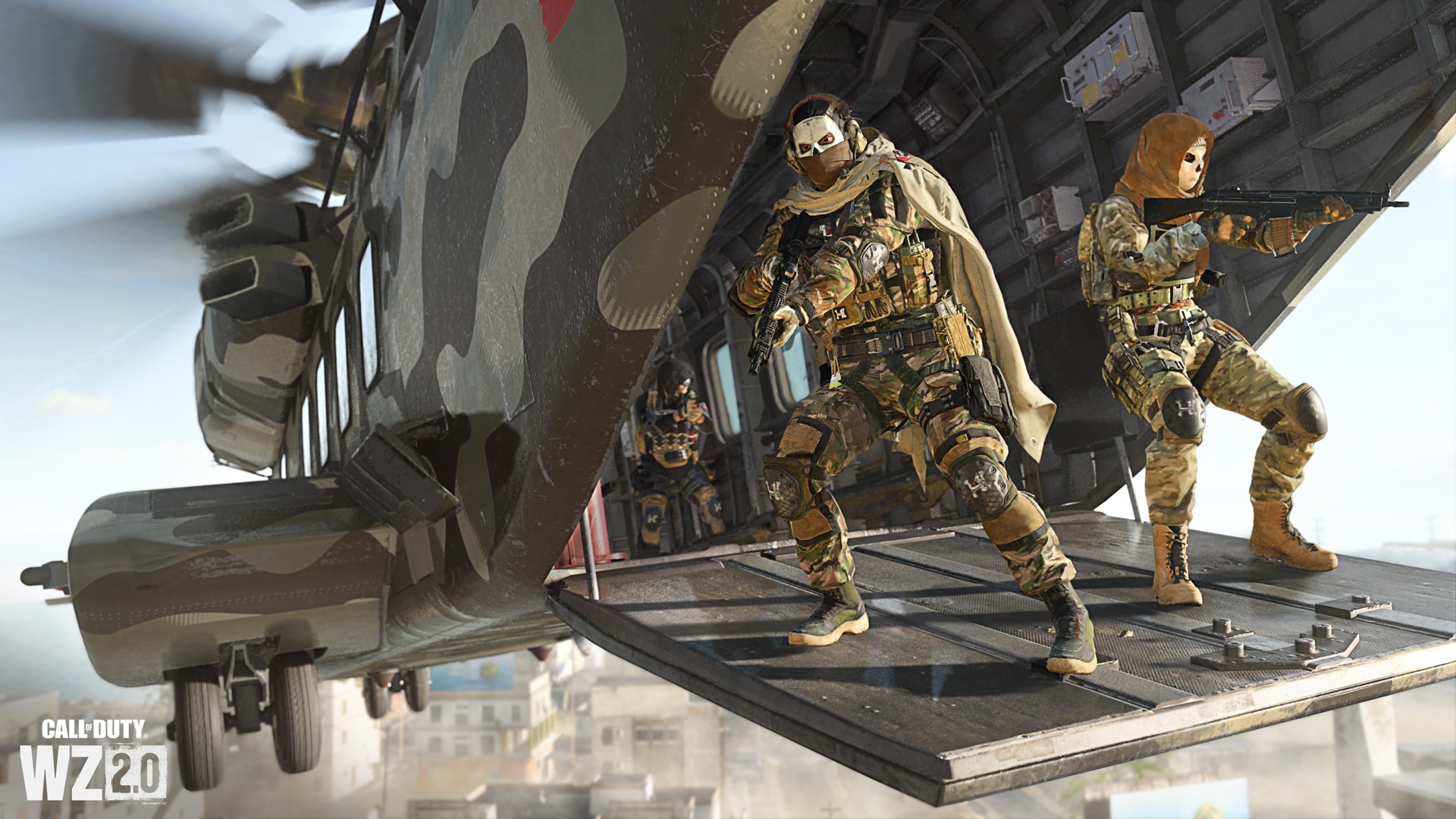 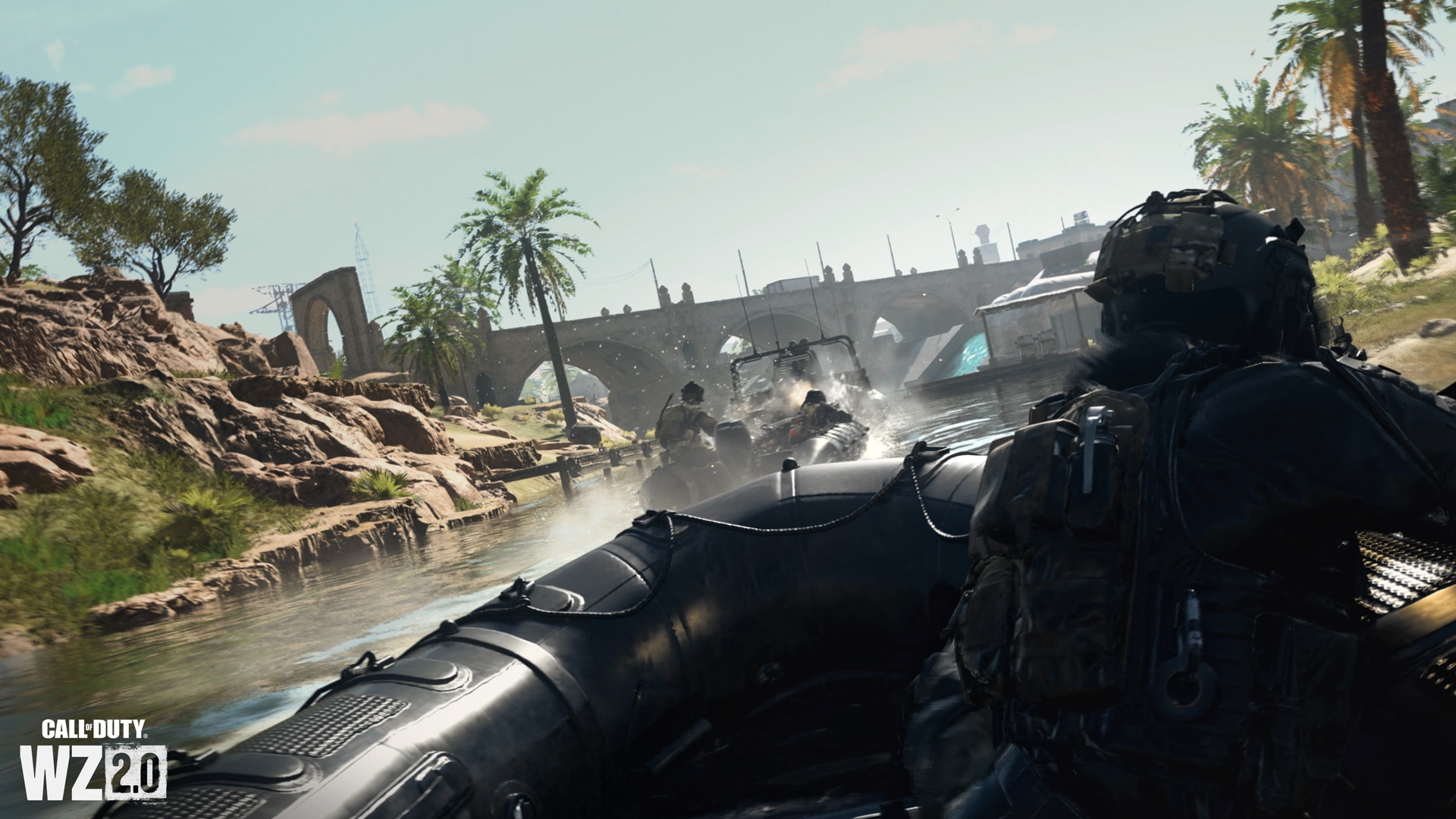 Expect combat across the land, sea, and air as the environment expands to include rivers, lakes, parts of the ocean, and more water-logged locations. This presents an all-new set of challenges and opportunites for combat, many of which were explored within the Modern Warfare II presentation at Call of Duty: Next. With a vast map the size of Al Mazrah, clandestine swimming up river tributaries, underwater ambushes and exploration, as well as quicker movement courtesy of the RHIB or Armored Patrol Boat is all possible, expanding your combat options considerably, using the tactics you’re learning during Modern Warfare II Ground War combat. 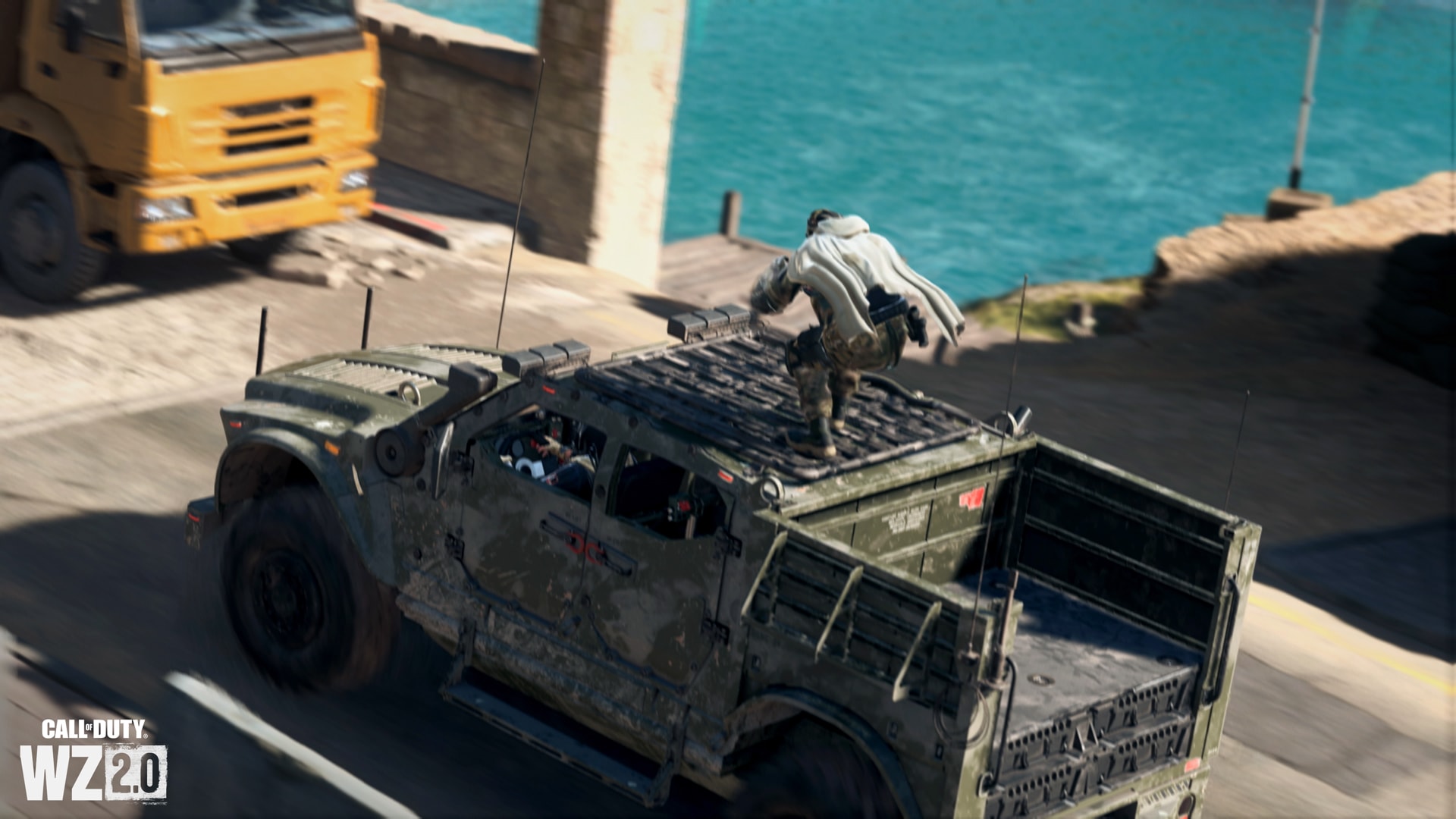 With combat across Modern Warfare II Ground War and Call of Duty: Warzone 2.0, you’ll have the chance to pilot, drive, or steer over a dozen new vehicles, and many of them are accessible on the Call of Duty: Warzone 2.0 map Al Mazrah. Naturally, a Guide to Vehicles showcases the vehicles in readiness for their use during the Open Beta; click HERE to read more about the Tactical Vehicle, UTV, Light Tank, Heavy Chopper, and Rigid Inflatable Boat just to name a few.

What’s more, depending on the vehicle you’re commandeering, you can customize it with a skin, including the free “Floor It” Vehicle Skin you can unlock during the Open Beta (click here for intel on all ten free Open Beta rewards). In addition, expect to climb or drop onto vehicles, damage tires and doors, shoot out windows, and be on the lookout for gasoline, as every vehicle (including boats and helicopters) gradually runs out of fuel. 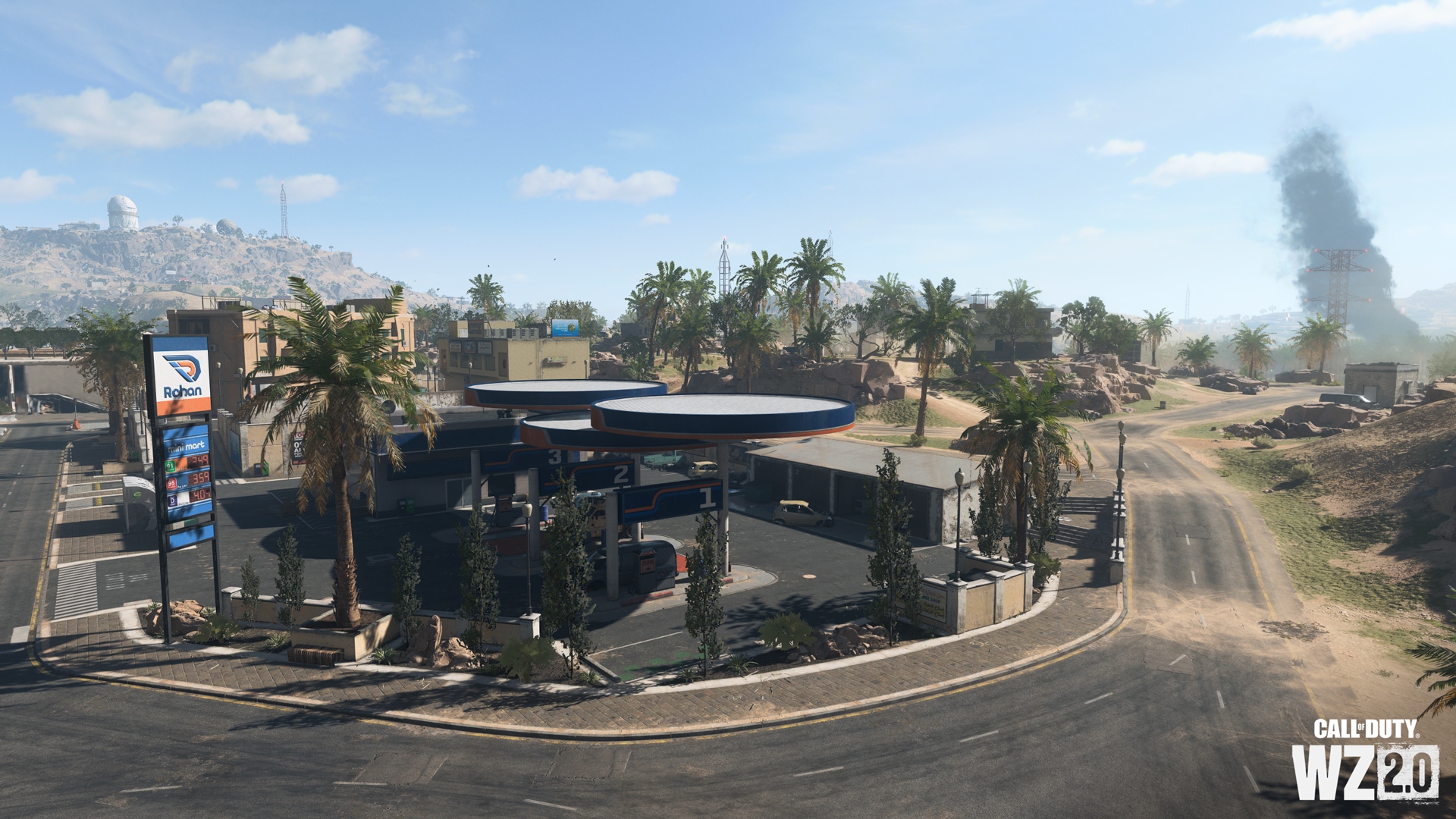 You’ll need to then weigh up the advantages of keeping a vehicle running and extending its longevity by tactically locating and occupying a local Gas Station (or searching for Gas canister loot). While vehicle tires can be re-inflated anywhere in the warzone, Gas Stations are smaller points of interest, but are likely to be occupised as they allow vehicle repairs to be made… and ambushes by enemy teams, so watch your six!

Naturally, if you’re using the rapid and almost-silent [REDACTED] EV as your method of transportation, a different course of refueling action is required…. 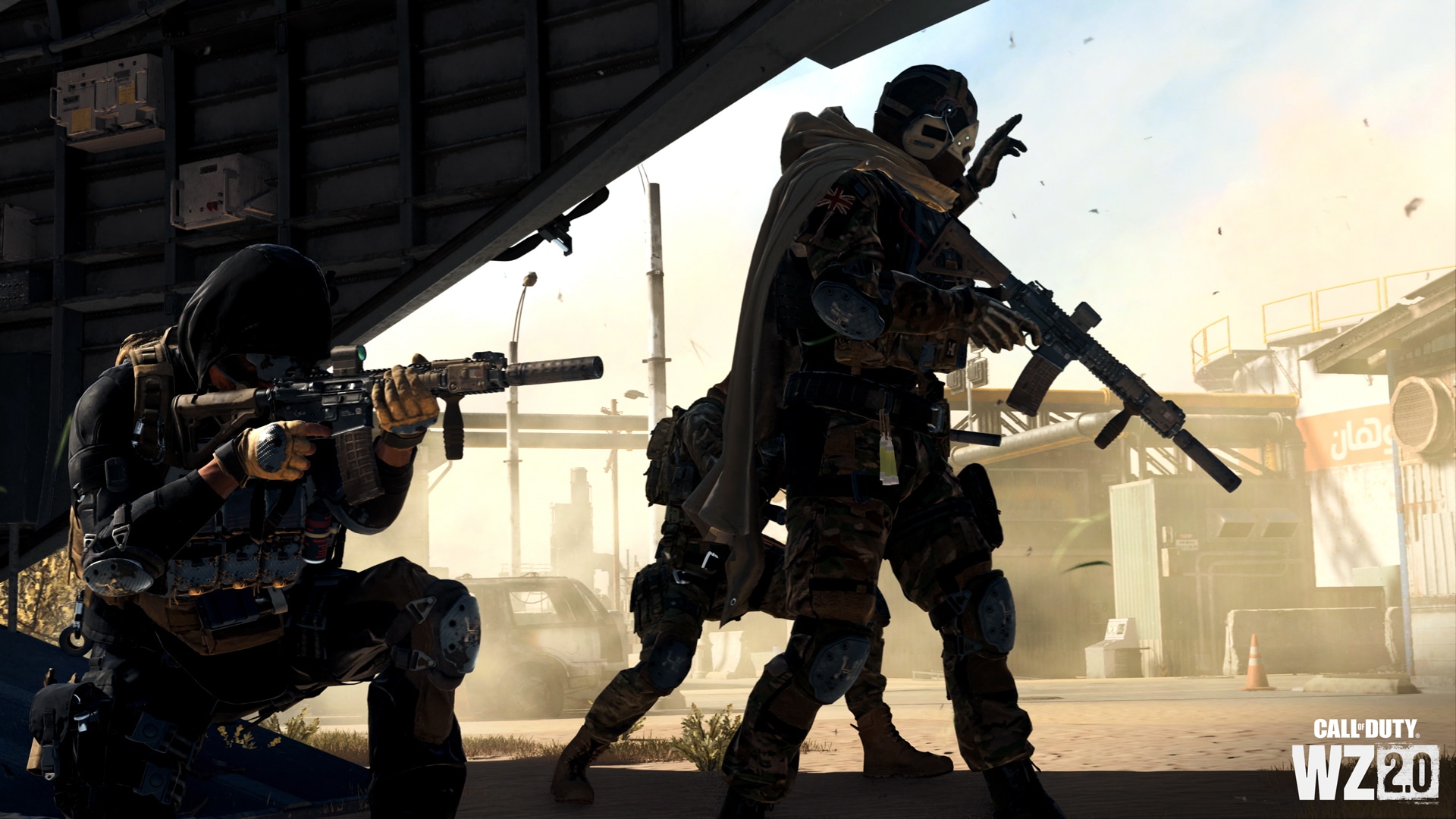 As well as a new and impressive array of ground loot and adjustments on how to access and store them, one of the biggest innovations is the expanding, yet streamlining of your purchases within a match. This comes courtesy of “The Shop”. These enhanced Buy Stations serve locations to buy and upgrade equipment and weapons, including the custom weapons you created before dropping in. Here are some actions you can complete at The Shop: 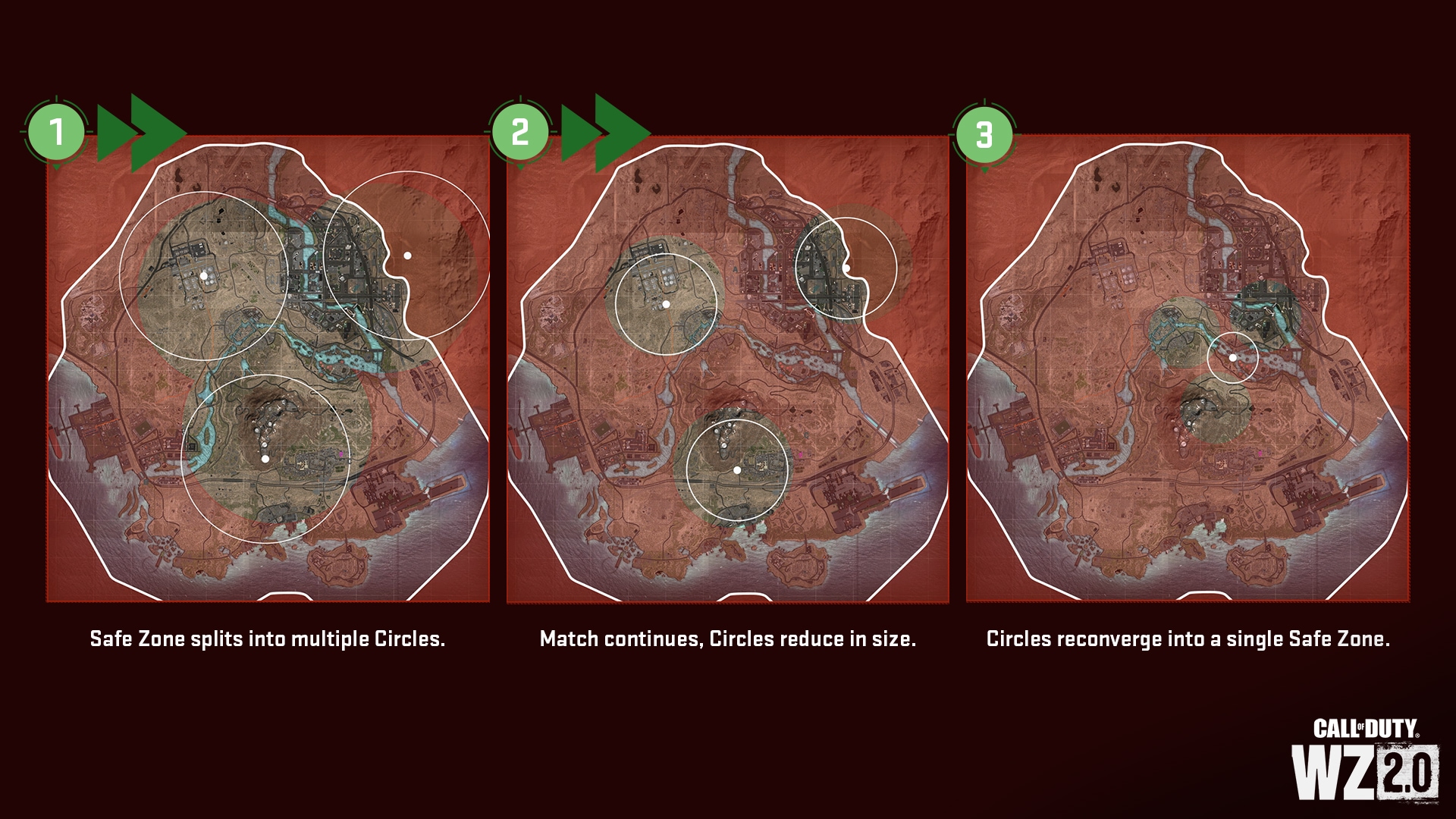 A choking storm gradually envelopes the Al Mazrah landscape, you may be familiar with the encroaching wall of vapor from your time in Verdansk and Caldera. This time, however,  expect variations within the Circle Collapse. One possible occurance may be the result of extreme weather pattern anomalies resulting in the safe zone splitting into multiple Circles throughout a match that reconverge into a single safe zone as the match gets closer to the final circle. 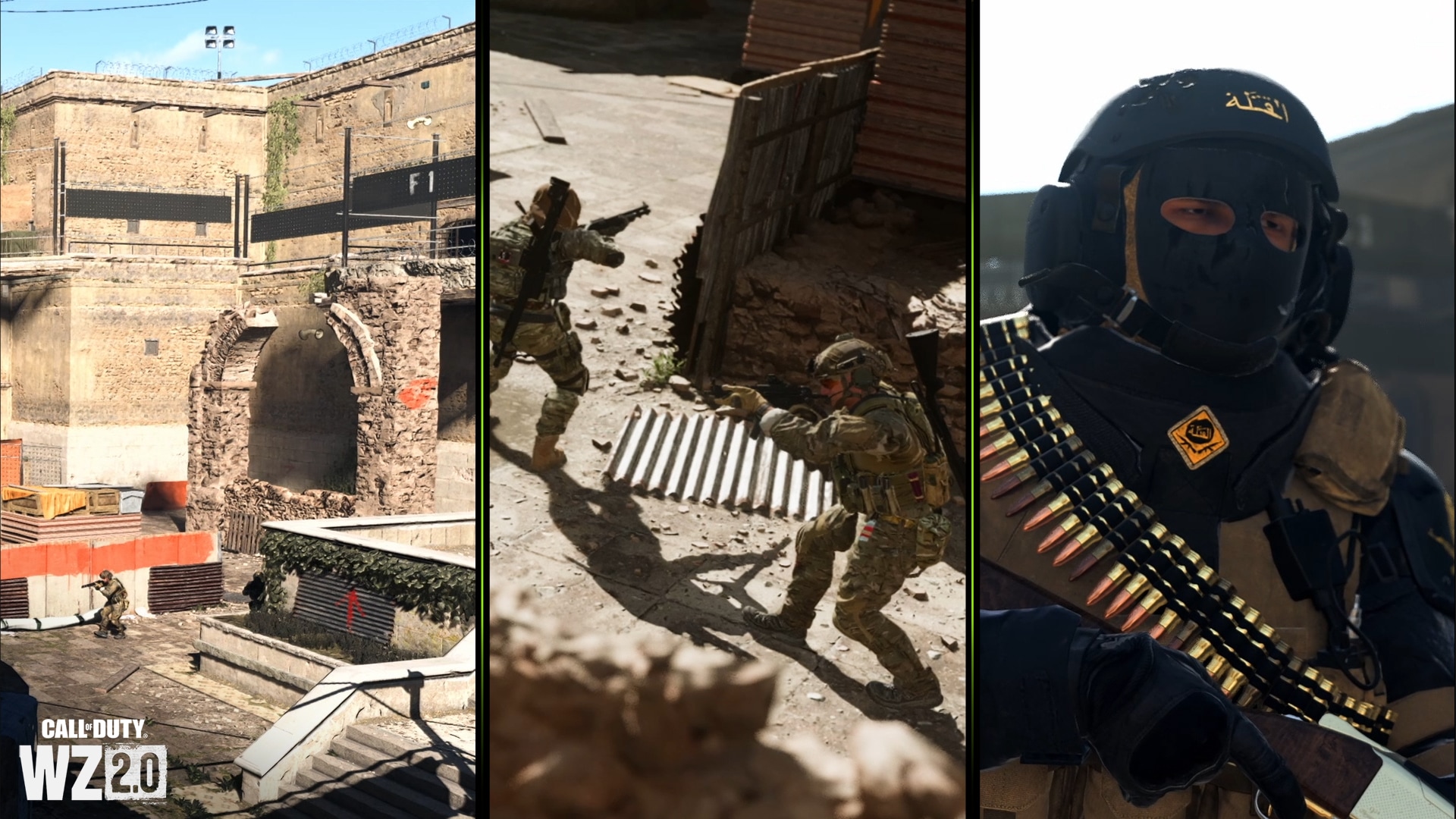 This isn’t your commanding officer’s Gulag: This is a livefire training complex as well as a prison, where foes need to be neutralized, and sometimes… partnered with? You’re dropped into a multi-level arena with only your fists, and a plan to loot, shoot, and win a decisive 2v2 battle before you’re allowed back into the big map for a second chance at victory. Optionally, your Gulag combat can include searching for an AI combatant known as “The Jailer”, dropping him, and using his key as the means of escape. Don’t forget to loot as you go; that gear comes with you if you win. 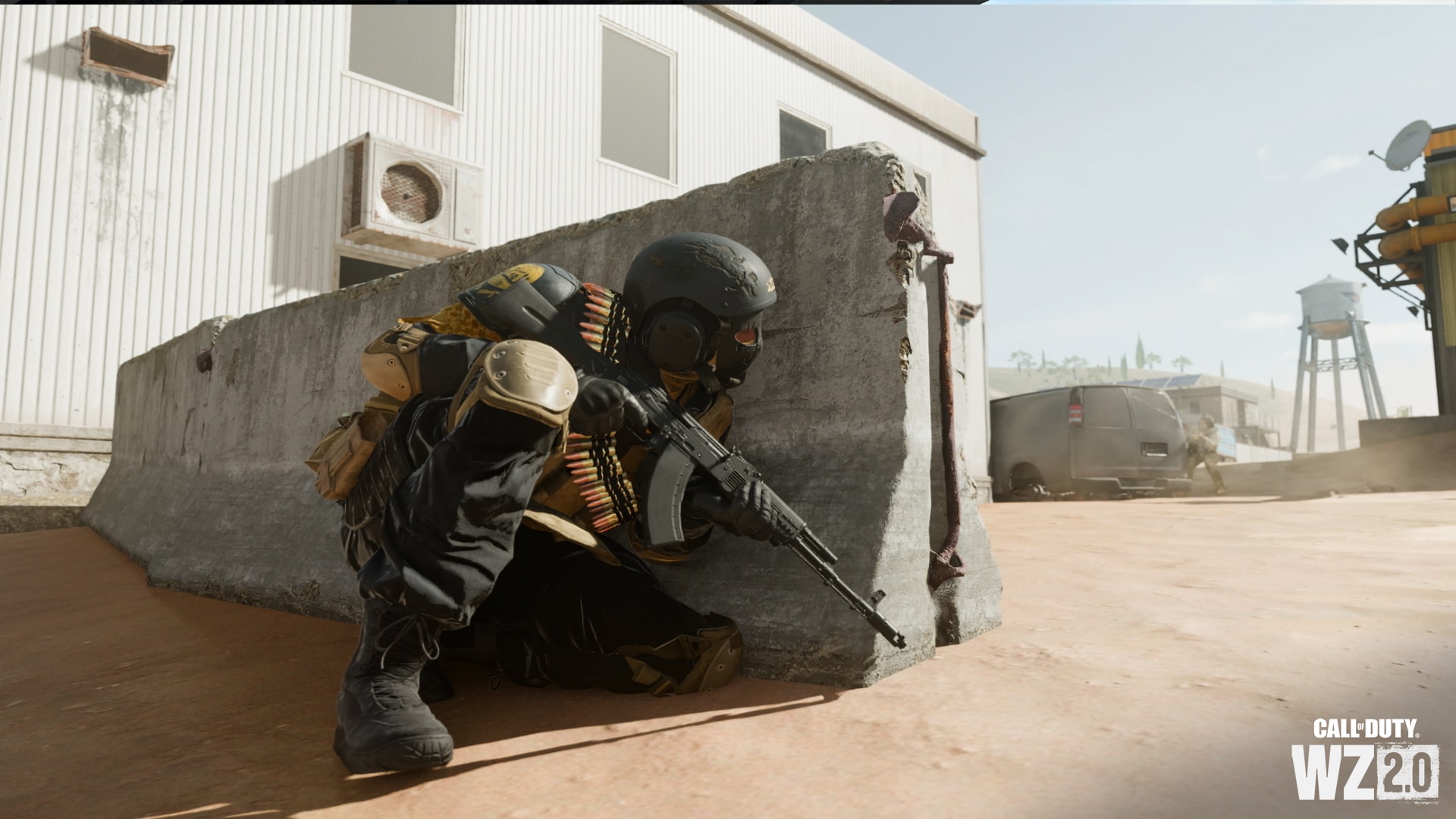 There are more than human Operators active within the Al Mazrah warzone; this is a living, breathing world with a number of AI combatants ready to defend their patch of land, all integrated into the fabric of the world. If you choose to engage AI combatants, expect a different type of firefight compared to player versus player.

If you’re concerned that AI combatants are going to get in the way between you and your W, then don’t be: It’s entirely your choice to engage the non-player combatants scattered across the map, or NOT to engage them. AI won’t actively pursue you or your squad, and you can choose never to interact with them. AI combatants have a variety of lethality levels and behaviors and are usually encountered in specific areas of the map. While they may defend their territory like a CDL pro, they won’t seek out combat.

Conversely, if you’re ready to take on any combatant you see, there are locations with a concentration of enemies dotted around the map where you’re guaranteed to have your combat mettle tested. Known as Strongholds, expect locked doors and a high density of AI combatants with a variety of innovative features to their responses depending on your tactics. Conquer a Stronghold and expect impressive loot, including an item that allows you to purchase one of your customized Gunsmith weapons at The Shop for free…. 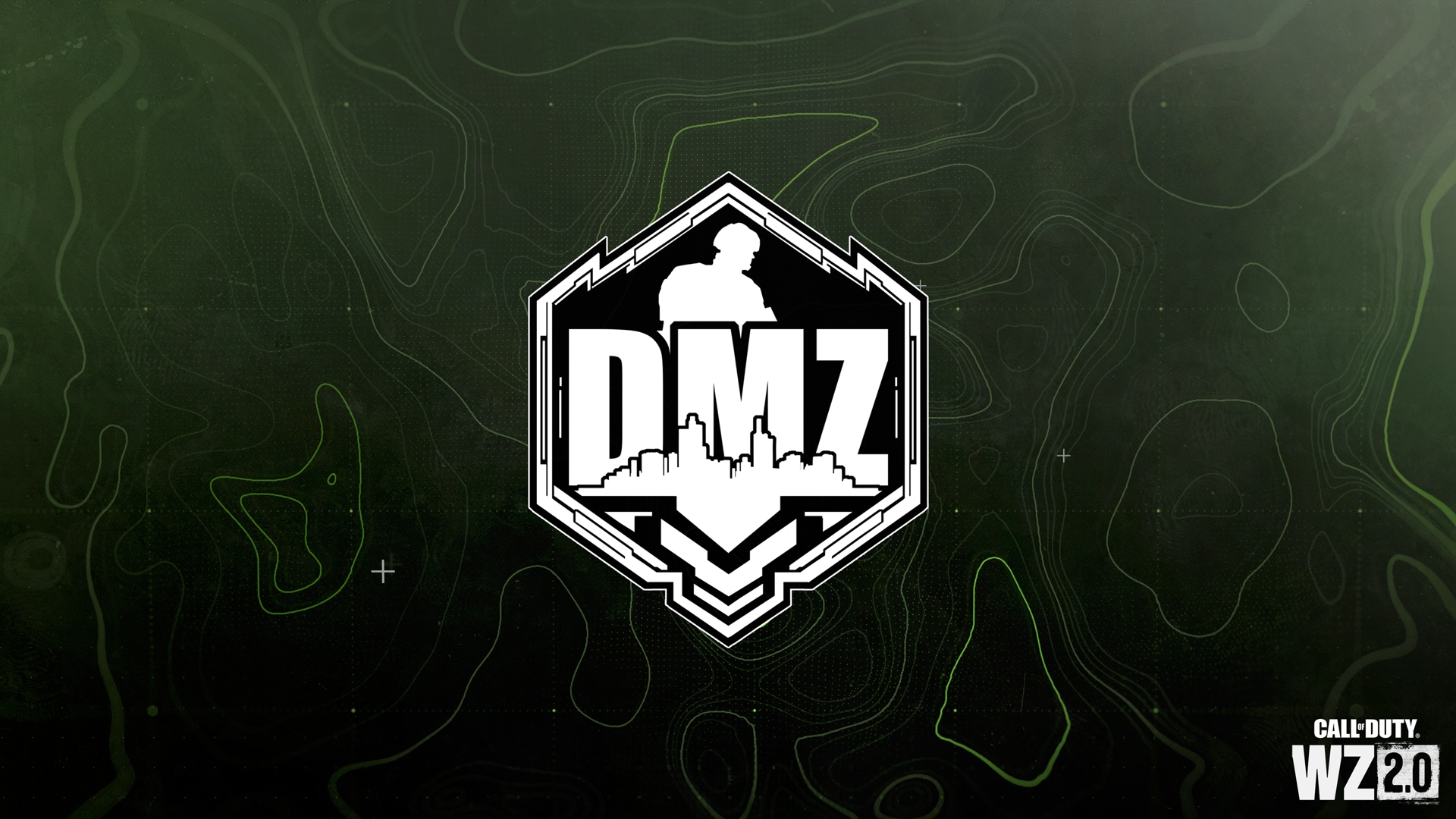 The most closely-guarded, leak-proof secret in Call of Duty history can finally be revealed; there is a special “extraction mode” coming to Call of Duty: Warzone 2.0. Known as DMZ, this is a passion project for the teams at Infinity Ward and across the contributing studios, and the main premise is about choosing your own experience within the warzone, working socially if you wish, and collecting gear to keep in your Call of Duty: Warzone 2.0 inventory and utilize from match to match. We’ll have much more to share about the host of new challenges, bounties, gameplay features and more when DMZ drops alongside Call of Duty: Warzone 2.0.

RICOCHET Anti-Cheat™ on Day One

COD SHOP Next Celebration: 20% Off!

In celebration of Call of Duty: Next, we are offering 20% off all items across the COD Shop for our Call of Duty community. Drop in at the COD Gear Shop HERE, gear, up, and use Promo code: NEXT20 at checkout. Offer ends 9/18.

Finally, ensure you have the latest Call of Duty: Warzone 2.0 official information by visiting the Call of Duty Blog.