The Villain’s Guide to the Beheaded Multiplayer Map in Call of Duty®: Vanguard 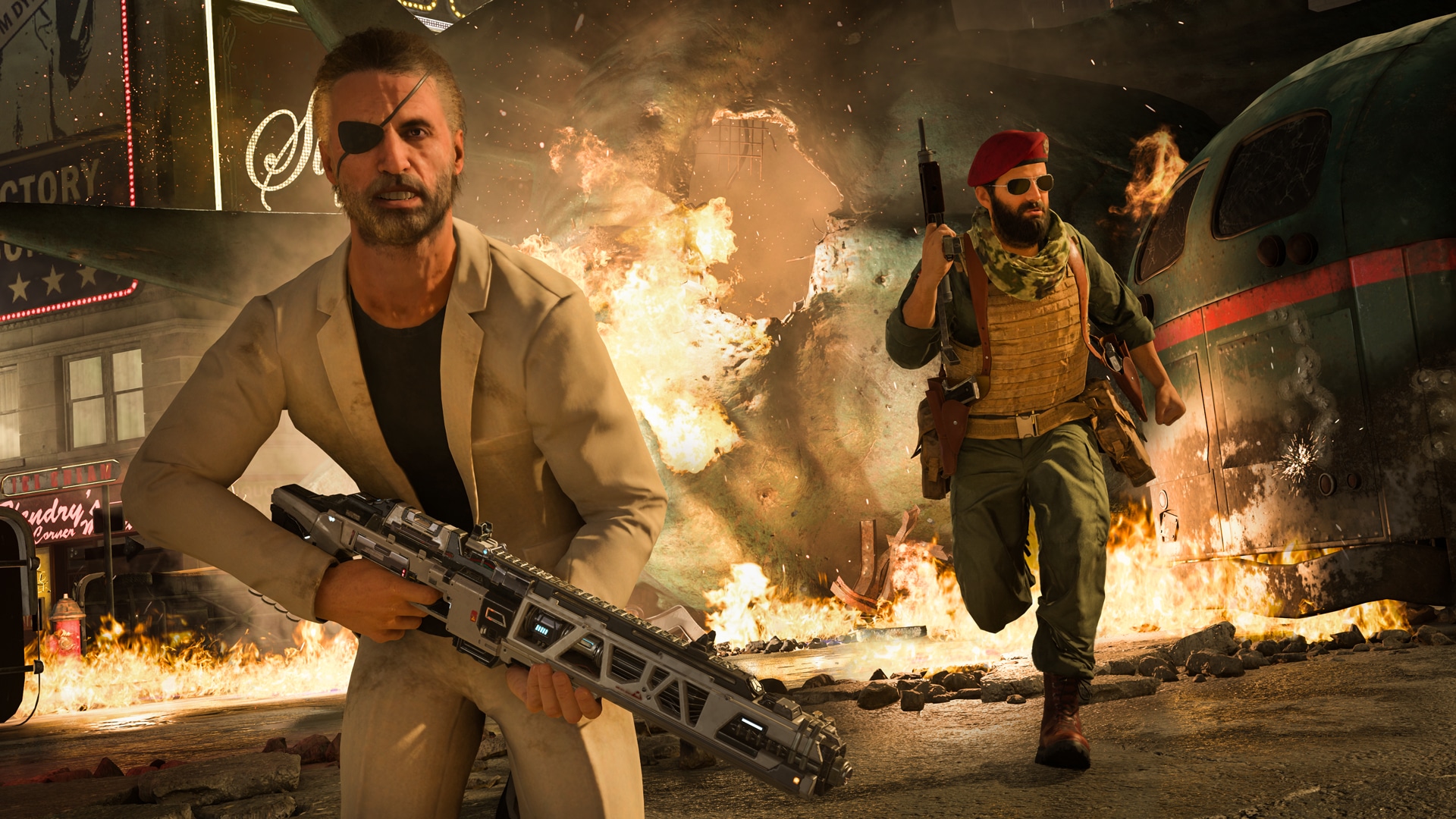 Take a bite out of the Big Apple in Beheaded, a post-apocalyptic Multiplayer map arriving with Last Stand, the fifth and final season for Vanguard and Call of Duty®: Warzone™. Navigate the crash site where pieces of the Statue of Liberty have fallen into the streets, and battle in and out of buildings representing New York’s bustling nightlife.

See the Last Stand announcement blog for a preview of what’s coming in the new season. Now on to Beheaded, launching August 24. 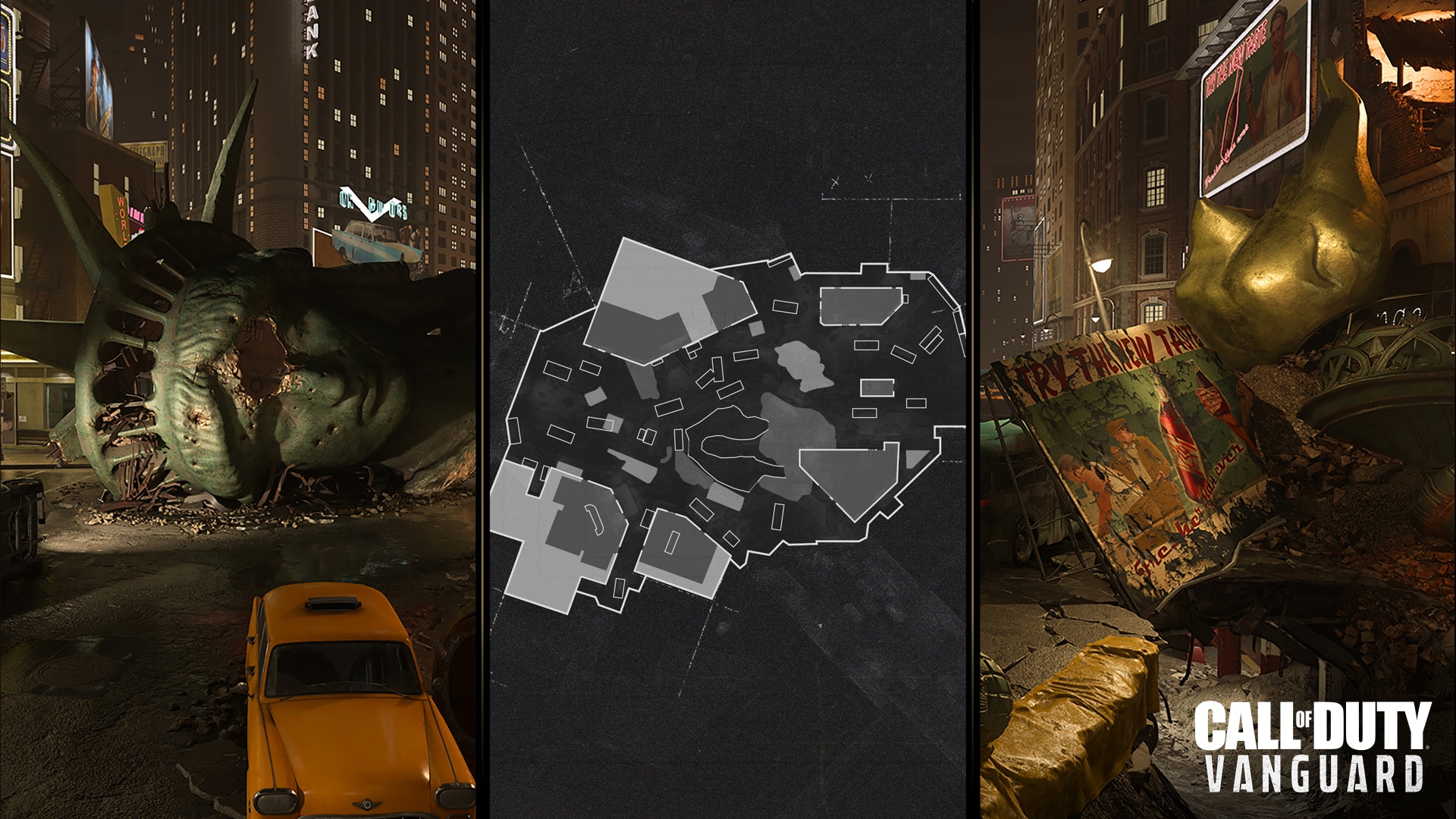 The Statue of Liberty’s head and torch-bearing arm lie smashed in the streets of the Big Apple, setting ablaze the floors over the Red Saxophone Lounge. Its small-to medium-sized layout encourages constant battle, while its interior spaces and flanking routes serve up plentiful tactical opportunities.

The western spawn point abuts a military blockade set up near the crash site. Facing east, there’s the Clothing Store sharing a building with the Bar and Bakery to the left, and Dudson Theater and the Record Shop to the right. Ahead you’ll encounter overturned cars, rubble, and scattered pieces of Lady Liberty.

A ring of debris surrounds the central collapsed street, opening access to the subway below. Navigate down to the station platform and then up the stairs out to the opposite spawn point.

The eastern spawn features a lounge and a diner, each accessible for interior positioning with back alleys that can be used to flank opponents or to escape pursuit in a flash. Throughout the streets, there are cars, rubble, and pieces of the statue that obstruct your sight; keep to the ground level to better avoid detection, or climb up for a better — but more exposed — view of the terrain.

Just off center lies the head of the statue. Enter via the neck or by mantling through the crumbled entrance at the back of her head. Climb up the inner platform to utilize the western-facing power position, offering strong views over a portion of the crash site and the toppled cars nearby.

Mid- and long-range Loadouts will see the most success outside on street level, using the surrounding detritus to create and cut off sightlines as you move through the map. SMGs and Shotguns, on the other hand, excel most in the map’s interior spaces, back alleys, and the Subway. 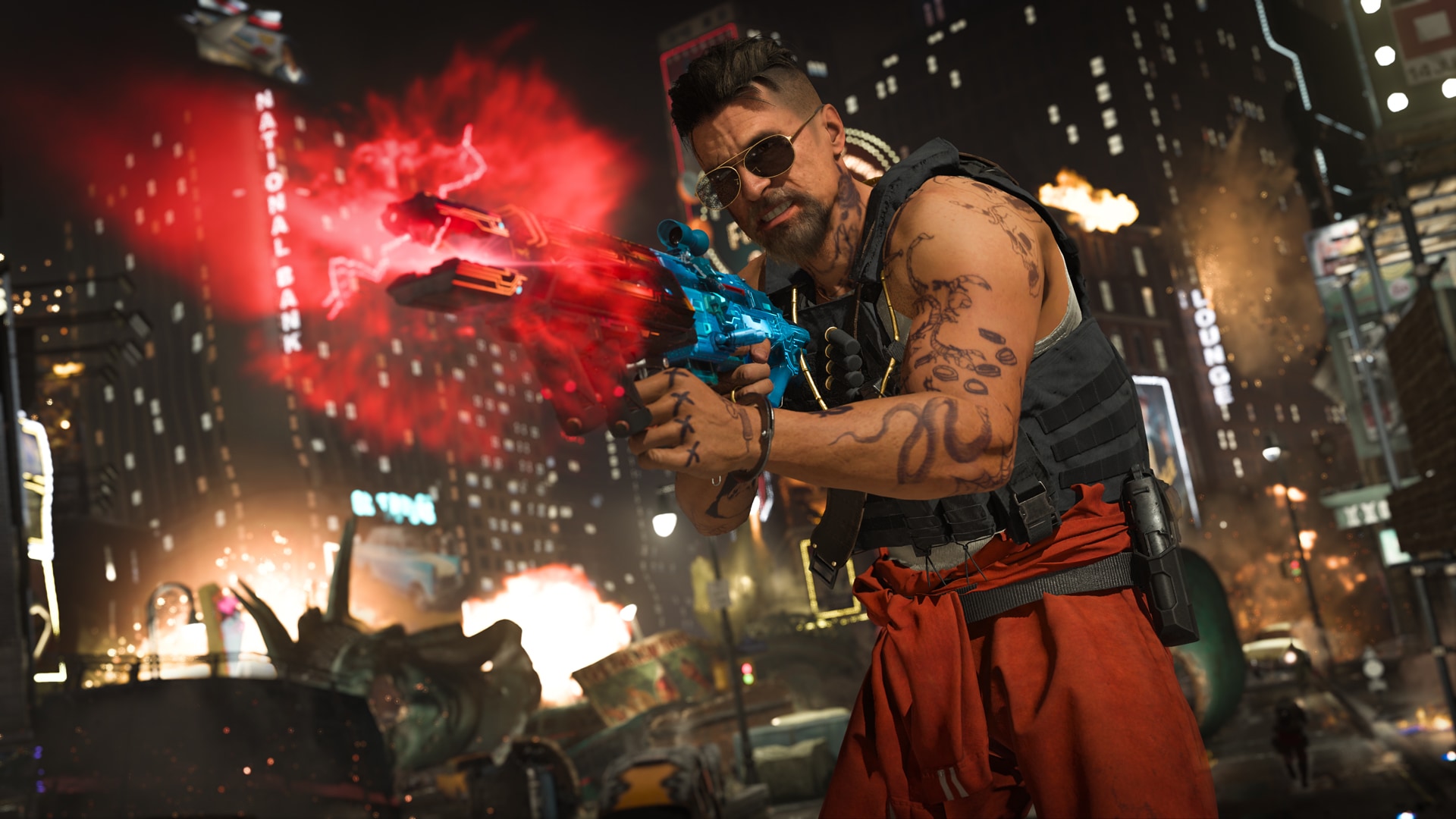 Bring the post-apocalyptic vibe with these two Loadouts, utilizing the EX1 and RA 225, both available in the Last Stand Battle Pass. They offer wildly different playstyles and can be equally devastating on the map.

The EX1 prototype Energy Rifle perfectly fits Beheaded’s dystopian setting; no wonder it’s Raul Menendez’s weapon of choice. In this Loadout, we’re transforming the Rifle’s natural full-auto setting with the EM1 Burst Barrel, paired with the EM1 L Battery for greater damage range, plus the EM1 Handstop and Leather Grip for greater accuracy and handling. The suggested attachments are all earnable within the first or second slot of their category.

Attach your favorite Optic and go to town. This configuration performs great in the mid-range and is a solid tool for attacking from the power position within Lady Liberty’s head. For Perks, expand your minimap with Forward Intel and blast opponents with a combination of Armory and Demolition, granting an extra Lethal and a fast throw. Grenade out!

This Loadout is perfect for patrolling the Subway path and for clearing out interior spaces, especially pesky enemy Operators stationed inside the statue’s head. Use Fortified for added defense against explosives, Radar to better track enemy players, and Scavenger to keep your ammo in good supply — the RA 225 eats up bullets fast and won’t do much good empty. Stay stocked and keep shredding. 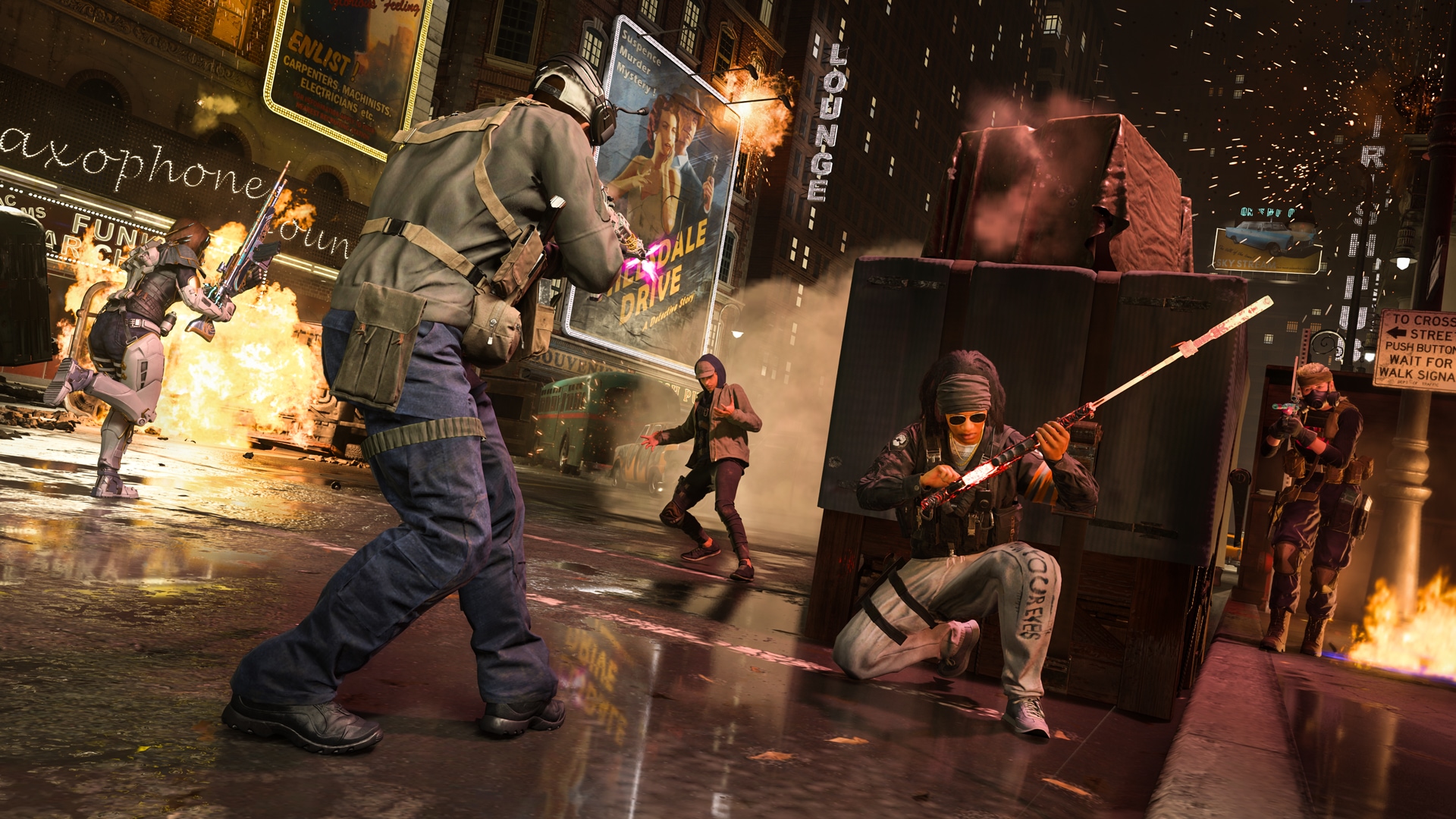 10. Be a Good Tourist. See everything — the main sites and what’s off the beaten path, too. Beheaded may be small, but its complexity rewards exploration, benefiting players who delve into every building and back alley. Experiment with different Loadouts and queue up for more matches, and you’ll be a regular New Yorker in no time.

9. Big Apple and Jam. The Jammer Field Upgrade can really put a dent in the enemy team’s map awareness on this map. Try combining the Jammer with the Mechanic and Armory Perks to speed up the recharge rate and make them undetectable to enemies using the Engineer Perk.

8. Find Me at the Diner. The lunch counter at the diner makes for a great barricade against incoming fire. Post up here when the fighting gets hot for added defense, though keep your eyes and ears tuned, as the building features seven different entry points. Get some Eliminations and then melt away through the back alley before they seek an easy revenge.

7. The Eye of the Storm. Don’t be shy; head straight to the crash site and fight in the center of the map. Learn to navigate the debris and outplay enemies in this area and the rest will fall into place easily. Get comfortable with fighting in the Subway and making detours to the statue’s head.

6. Control the Fight. Use the multitude of debris and overturned cars to control the pace of your fights. If you get caught off guard, move out of sight and reposition for the advantage. Surprise opponents by climbing up on objects, fall back to make them come to you, and when you see the opportunity, strike fast.

5. Subsonic Ghost. Pair Subsonic ammo and the Ghost Perk to fly under the radar and take your enemies by surprise. This works best after a few matches when you’re familiar enough with the map to outmaneuver opponents.

4. Get to Cover! Get familiar with all the interior spaces, as they’re spread out enough to make for a quick getaway from aerial threats if you know where you’re going. The quicker you can switch from an outdoor to an indoor setting, the better. Have a close-range weapon on hand for when you encounter enemy resistance.

3. Pincer Attack. When a teammate goes left, you go right. The cover objects here offer plenty of opportunities to create pincer attacks, throwing opponents off balance as they struggle to target Operators coming at them from multiple angles.

2. Watch for Traps. If you’re getting caught by traps and enemy Field Upgrades, switch in the Engineer Perk. You’ll spot them ahead of time and can hack them to your own use, expanding your combat options.

1. Become a Legend. Season Five is all about becoming a legend. Whether heroic or villainous…that’s up to you. For the villains, start Beheaded right by purchasing the Last Stand Battle Pass Bundle, granting immediate access to Raul Menendez and his favorite weapon, the EX1. Whoever you take into battle, don’t let up. 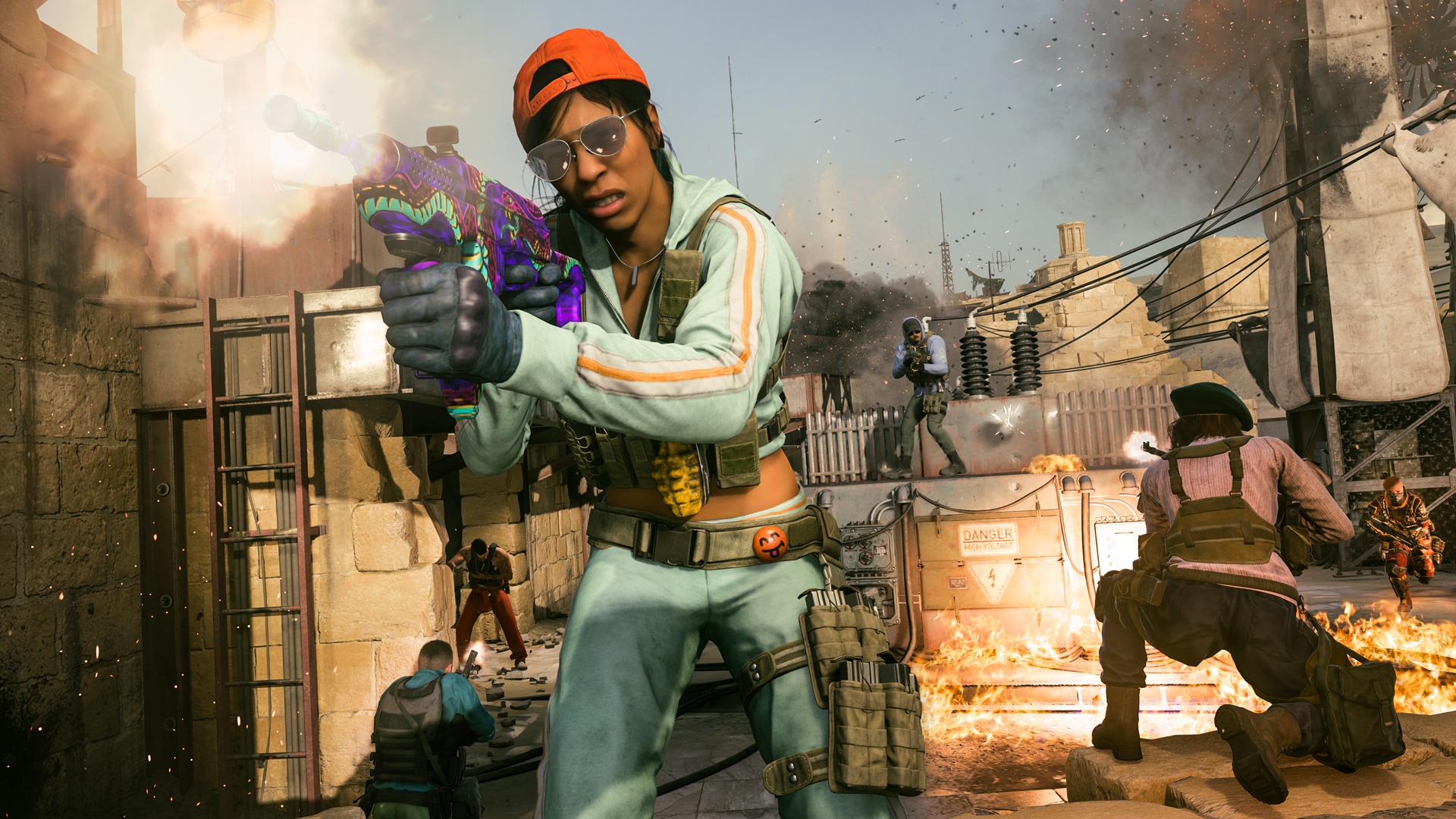 Battle in a maritime graveyard on this medium-sized Multiplayer map set in the Mediterranean. The eponymous fortress incorporates an old ship into its design, creating a varied landscape to be exploited by savvy Operators. Fortress launches for free to all Vanguard players in the Last Stand midseason update.

Take the fight to Beheaded when the new Multiplayer map launches alongside Last Stand, the final season for Vanguard. Along with this new map, Season Five introduces Task Force Tyrants, which comprises several iconic Call of Duty® villains as playable Operators. In addition, volcanic activity heats up Caldera, and the Dark Aether saga sees its finale in The Archon, a new round-based Zombies experience.