Call of Duty: Warzone Rebirth of the Dead guide 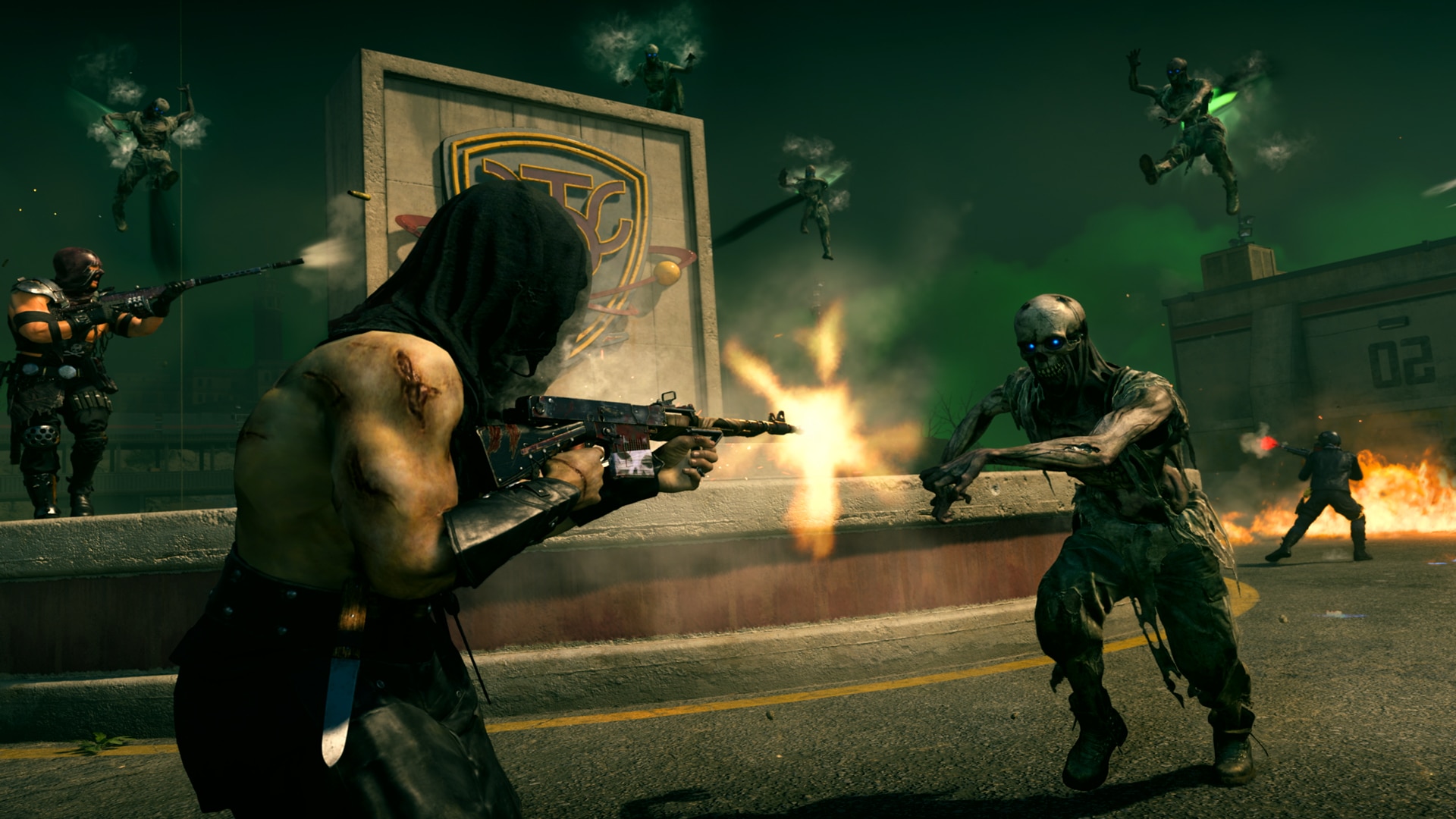 The undead are back in Warzone and giving new meaning to the familiar map: Rebirth Island.

Developed by Beenox, Rebirth of the Dead is a limited-time mode in Call of Duty: Warzone that allows Operators to become Zombies in a unique 40-player Quads match.

“As soon as we were asked to bring the memorable Zombie Royale to Rebirth Island, the whole team came on board with incredible enthusiasm and a great many ideas,” said Marc-André Gagné, Senior Expert System Designer at Beenox. “Our number one priority was to keep what made the original mode great while adding a few key quality of life improvements and looking for ways to make it a uniquely Rebirth Island experience.”

Those who remember Zombie-based Warzone modes in the past will be familiar with this type of undead royale. But with a new Infestation mechanic and several small changes – including the exclusion of jump scares, which should be great news for scared streamers – Rebirth of the Dead is poised to be a frenetic, fun, and challenging experience for all players.

These details, as well as the unique rewards for playing this mode, are as follows:

Rebirth of the Dead — How to Play

Rebirth of the Dead is an altered Mini Royale where up to 40 players can drop in as part of a Quad (a team of up to four players).

In addition to exploring a haunted Rebirth Island under the cover of a late-day fog, Operators who perish will be brought back to life as a Zombie.

However, these Zombies aren’t the usual shambling cannon fodder for grinding cool camos: player-controlled Zombies have a few tools at their disposal for survival:

Charged Jump: Close distances or switch up movement patterns with this fast-recharging ability. The longer you hold down the command to make a Charged Jump, the farther and higher you’ll leap.

EMP Blast: Destroy enemy electronics — including equipment like Proximity Mines, as well as vehicles and digital optics — and disable the HUD of any Operators within the blast radius.

Gas Grenade: Damage and disorient your enemies using the Gas Grenade, which spews out toxic particles in a small radius emanating from you. Great when combined with the EMP Blast and in close quarters. 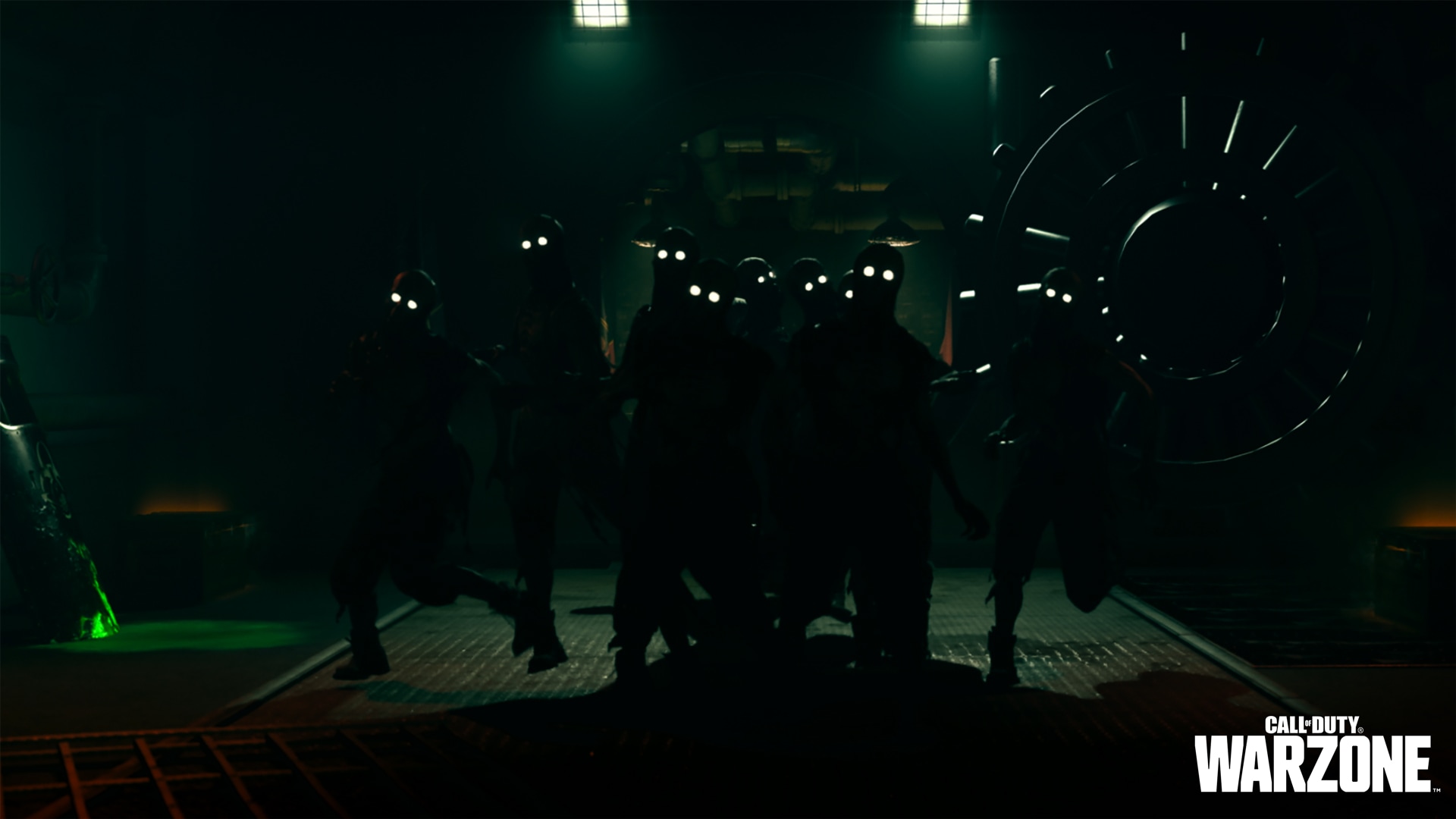 Just like in the previous Zombie Royale, eliminating Operators grants Zombies Syringes, the antidote for their undead condition.

A Zombie needs four syringes to be redeployed as an Operator.

New to Rebirth of the Dead, lone syringes can be found in Supply Boxes, Medical Supplies, and Buy Stations.

Zombies are now able to open Supply Boxes. Resurgence Supply Boxes, and even doors, but cannot break open those heavy, cube-shaped Drop Crates without the help of an Operator.

Loose syringes will also be outlined through obstacles — walls and other cover pieces — to make them easy to spot, even in low visibility conditions.

Alternatively, a Zombie will get two syringes for eliminating a human Operator. Or, if they perform a Finishing Move on that Operator, they will get four syringes — in other words, an automatic redeploy for humiliating prey. 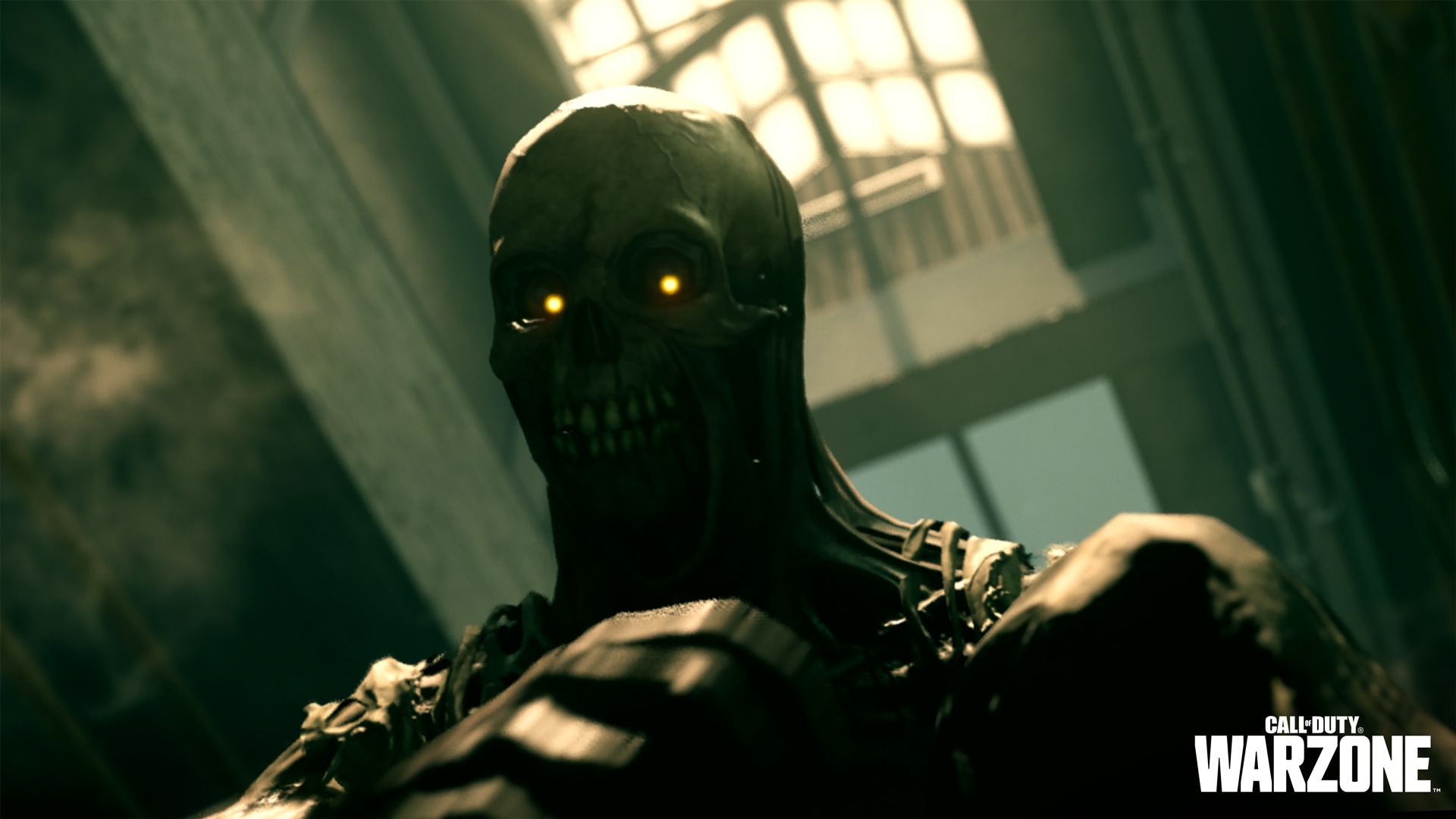 Along with adding a new way for Zombies to become human again, Beenox had three priorities for this new twist on the previous Zombie Royale mode:

Infestation brings the spirit of a late-round Zombies rush to Warzone, as Operators may need to fight off dozens of recently respawned Zombies to survive long enough for the final circles.

In Rebirth of the Dead, the player HUD includes an Infestation meter. It gets filled as zombies are killed. Once it is full, the Infestation event begins.

At the start of an Infestation, every spectator — Zombies who were KIA — will be respawned. This gives an “extra afterlife” to players who may have gotten eliminated early from the game.

The other event during Rebirth of the Dead is the Medical Supplies event. As its name implies, this event deposits Medical Supplies containing Syringes and high-rarity gear around the map. Operators can crack them open for their Zombified squadmates.

Other than these differences, the rules of Rebirth of the Dead are like a standard Mini Royale: the circle collapse waits for no Operator or Zombie, although the latter can move through the gas, and the last surviving squad wins. 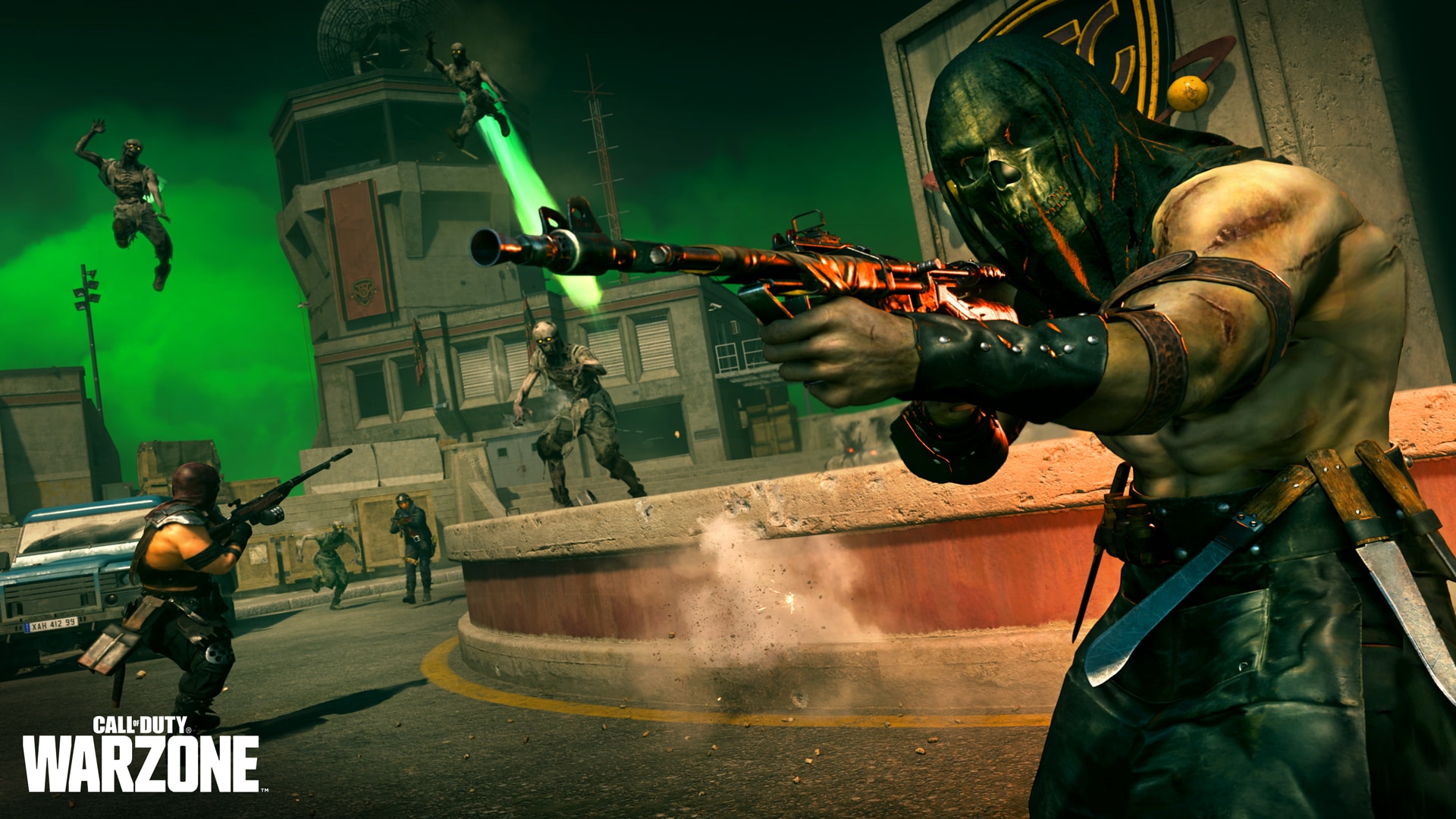 1. Disable, Disorient, and Attack… As a zombie, using abilities is key to fighting Operators with ranged weaponry. Activate the EMP Blast to destroy nearby equipment. Follow that up with the Gas Grenade to disorient them…and try to execute a Finishing Move; you may even get a reward for hitting at least one in this mode.

2. Hybrid Power. If squadmates join the Zombie ranks, they can still be helpful in eliminating enemy squads. For example, they can charge an enemy head-on while human players sit back and snipe. They can also open those Medical Supplies, which have plenty of Syringes for their undead comrades.

3. You Got to Give Us a Shot. Eliminating Operators is not the only way to gather Syringes — open the Supply Boxes that those careless humans did not bother to check, and remember to look for red outlines of them through walls and cover.

4. Mind the Infestation. This new mechanic can be a game-changer, as a dozen or more extra Zombies in the lobby can cause chaos. Check the Infestation meter often to see when it is nearly full; then prepare for a siege with Field Upgrades like Portable Cover and traps such as a Proximity Mine.

5. To the Victor Go the Spoils. If you win Rebirth of the Dead as a human, expect to receive the animated “Last Alive” Calling Card. Keep playing and learning from previous failed attempts to unlock what may be a rarity among all Warzone accounts.

“We also knew that we had to make some changes to the mood and atmosphere of Rebirth Island to make it a worthy playground for zombies,” Gagné explains. “For that we came up with a brand-new Exfil sequence and had the pleasure of working with our friends at Raven in order to alter the look and feel of the island’s visuals. Stay on your toes — zombies might lurk in the heavy fog!”

Be sure to drop into Rebirth of the Dead this week — the undead do not rise from their graves often in Warzone, so beat them back down before they retreat…