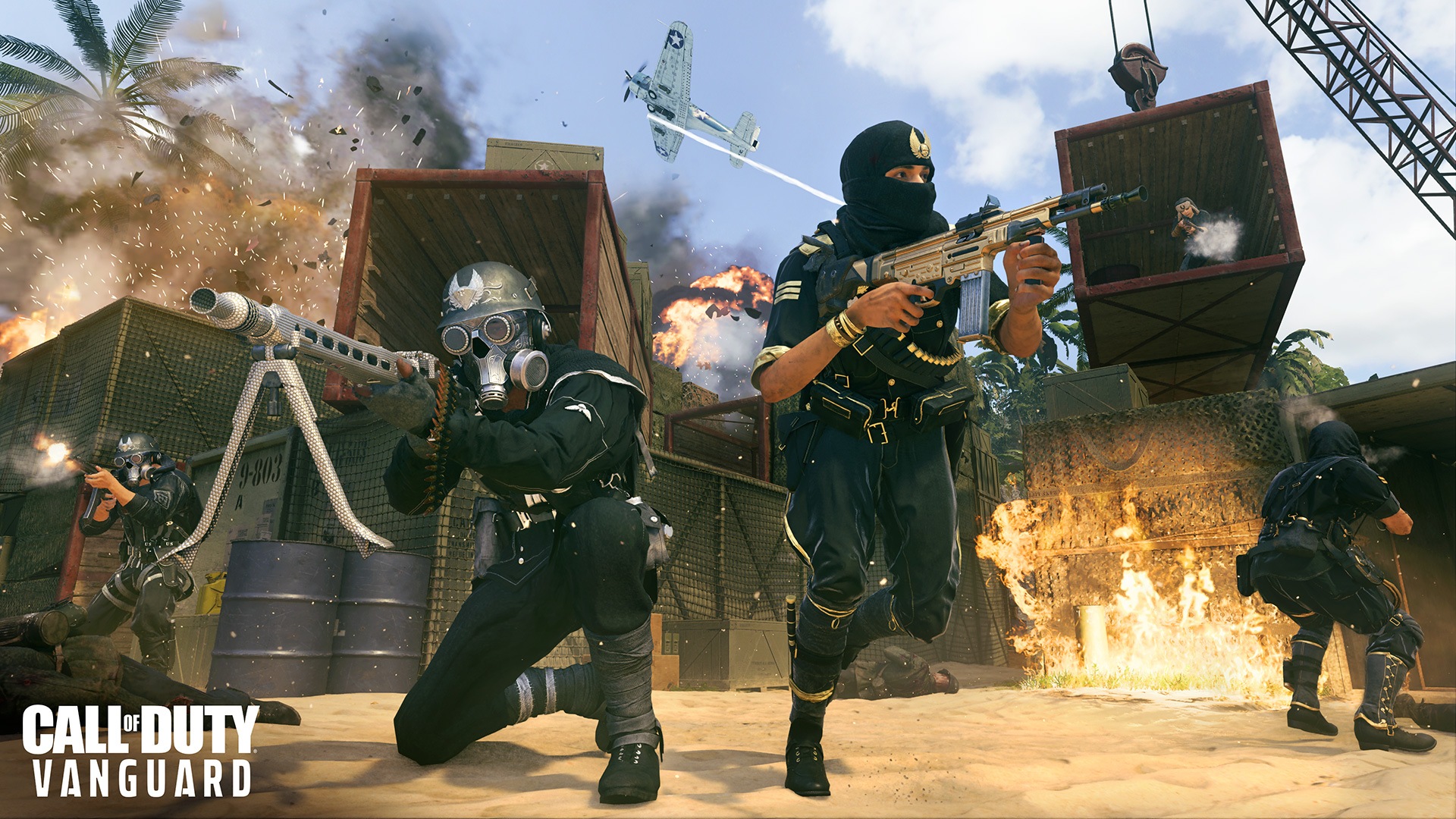 Shipment defines Call of Duty® Multiplayer; its size — the smallest in Call of Duty history prior to Gunfight — and simple design cemented this collection of vacant containers as a 14-year mainstay for the franchise’s map pool. During that time, it traveled across three console generations and made its way to smartphones, packaging pure chaos in a fun-sized, square-shaped box.

Vanguard is its latest destination.

On November 17, 2021, over 5,000 days since its first iteration, Shipment will treat all Vanguard Operators to a symphony of destruction within numerous Playlists.

And it will come just 24 hours before the Vanguard Multiplayer Free Access. 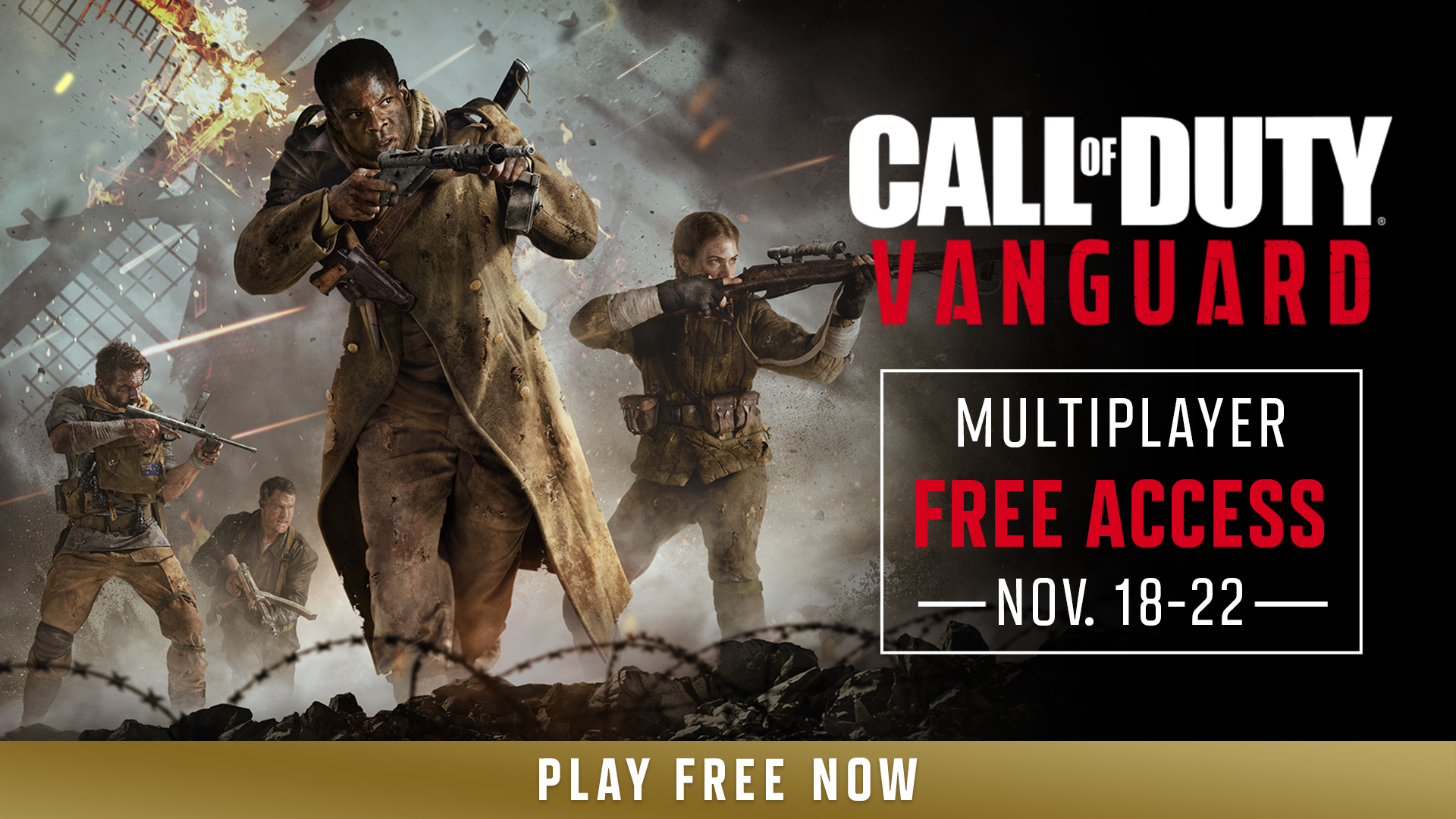 During this long weekend, all players will get full access to Vanguard’s Multiplayer. That includes the ability to try out and level up over three dozen weapons before they come to Warzone™ Pacific, a dozen Operators to unlock new gear for, action-packed playlists featuring Combat Pacing, and 17 core maps, including Champion Hill and the return of fan-favorite locale Shipment.

This Free Access period gives you a taste of what Vanguard owners get to experience before the next year stacks the deck with tons of free Multiplayer content. Owning Vanguard also gets you a gripping single-player Campaign and a universe-expanding Zombies mode, let alone 24-hours exclusive access to Warzone Pacific’s new map Caldera when it launches on December 2.

At its core, however, this Free Access focuses on Multiplayer, and with Shipment launching a day prior to the floodgates opening, you may need a few tips to beat the competition on this downright chaotically fun map.

“Fast-paced action with no hiding.” — Call of Duty® 4: Modern Warfare®

Those six words set the basic expectations for this map.

Back in November 2007, Shipment was one of 16 launch maps for Call of Duty 4. It was just a square map with eight sets of containers: four that formed a cross in the center, two side-by-side sets to the north and south, and two put up against each other on the east and west. Only two of them could be entered, making it nearly impossible to avoid the airstrikes and helicopters from above.

Outside of it being a test map for developers in Call of Duty®: Modern Warfare 2, a version of Shipment did not resurface until 2014, when Call of Duty®: Ghosts brought it back as Showtime within the game’s final DLC pack. It was a radical departure from the classic, featuring a special slot machine Field Order that fit the aesthetic of a deadly game show arena. 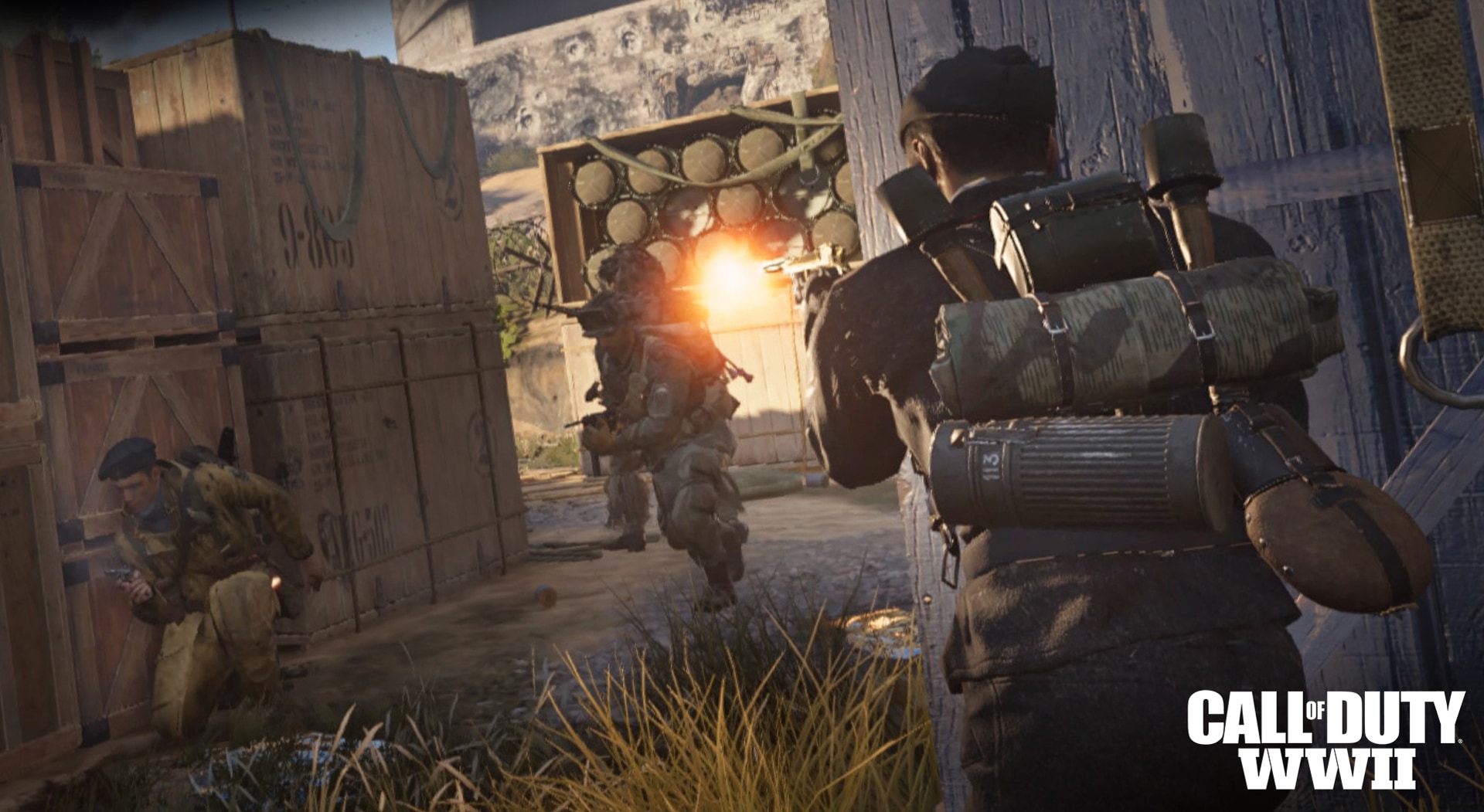 That same decade, Sledgehammer Games released Call of Duty®: WWII and, during the Shamrock & Awe event, Shipment 1944. This was a near-identical recreation of the original Shipment, with its setting being the only difference. Shipment 1944 was set on the beaches of Normandy, right next to the classic Headquarters where one Captain Butcher began his own legacy. After a one-year gap, Call of Duty®: Modern Warfare® brought back Shipment as part of its first-ever season of free content. 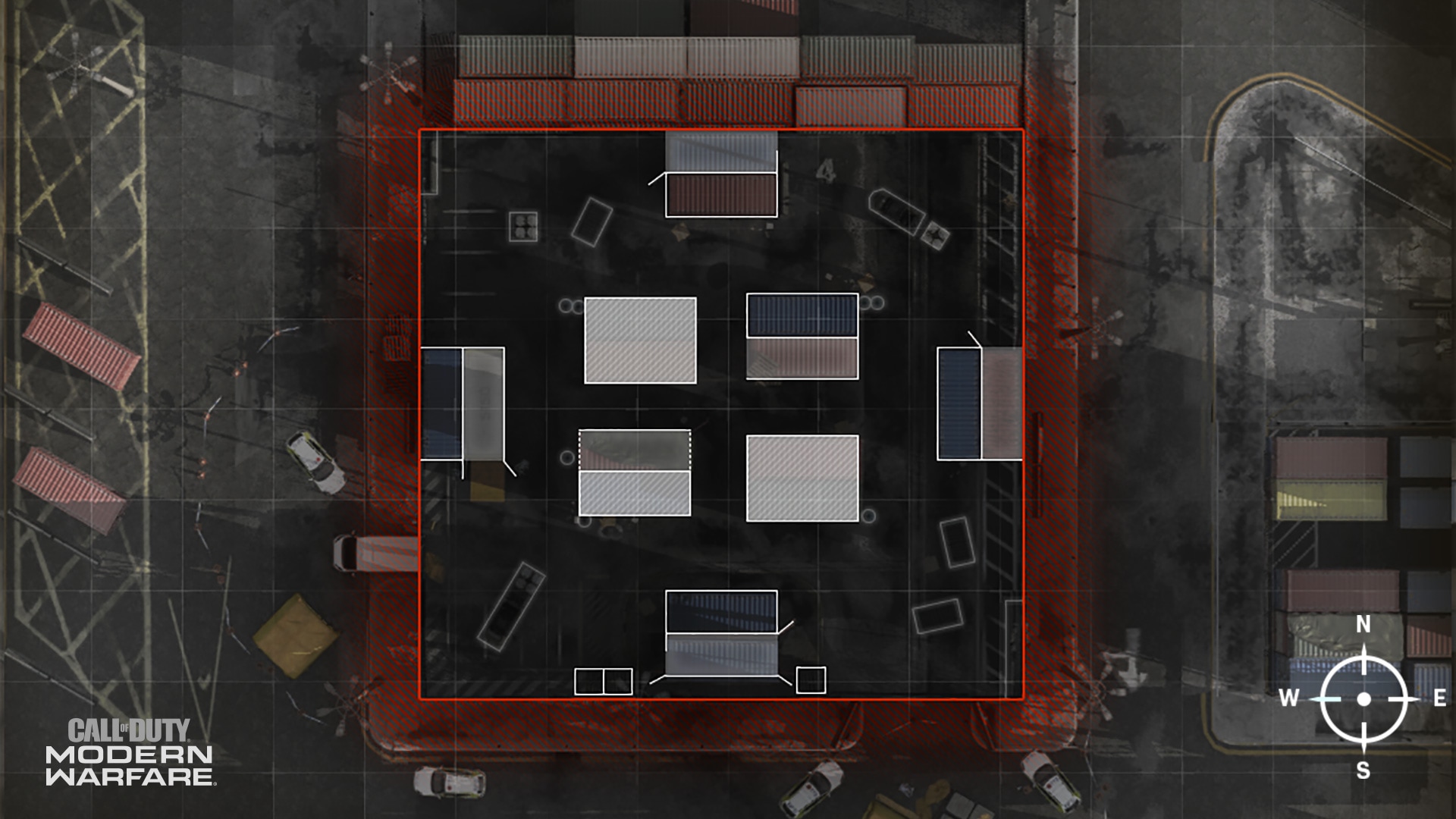 This version of Shipment once again shifted its setting — this time to the Port of London — and made several design changes, including the ability to climb on specific sets of containers.

Players could see just how different these two Shipments were if they played Call of Duty®: Mobile, where both the WWII and Modern Warfare versions of the map were playable. 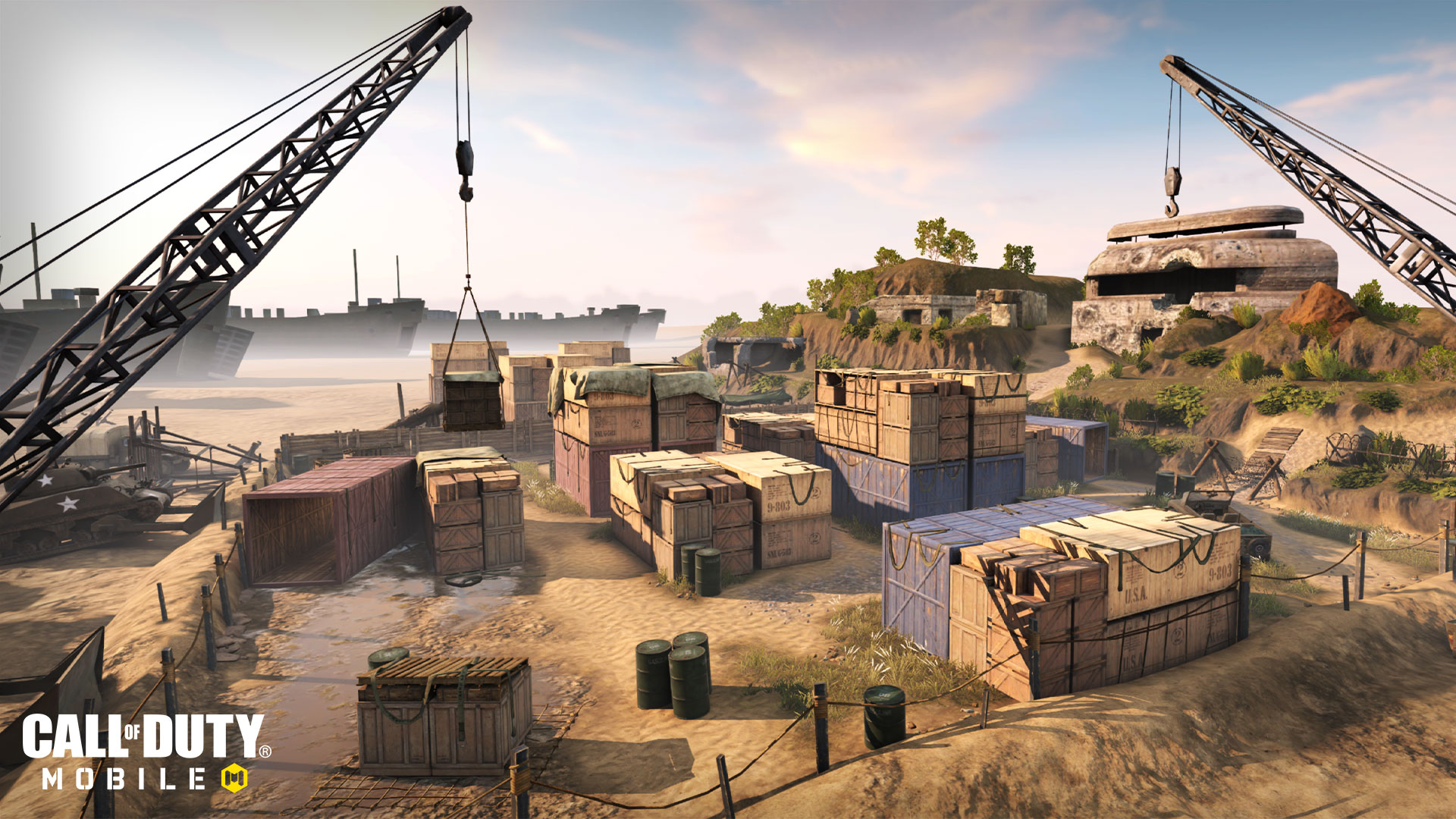 In 2020, Mobile Operators got to experience Shipment 1944 within Season 9 Conquest… 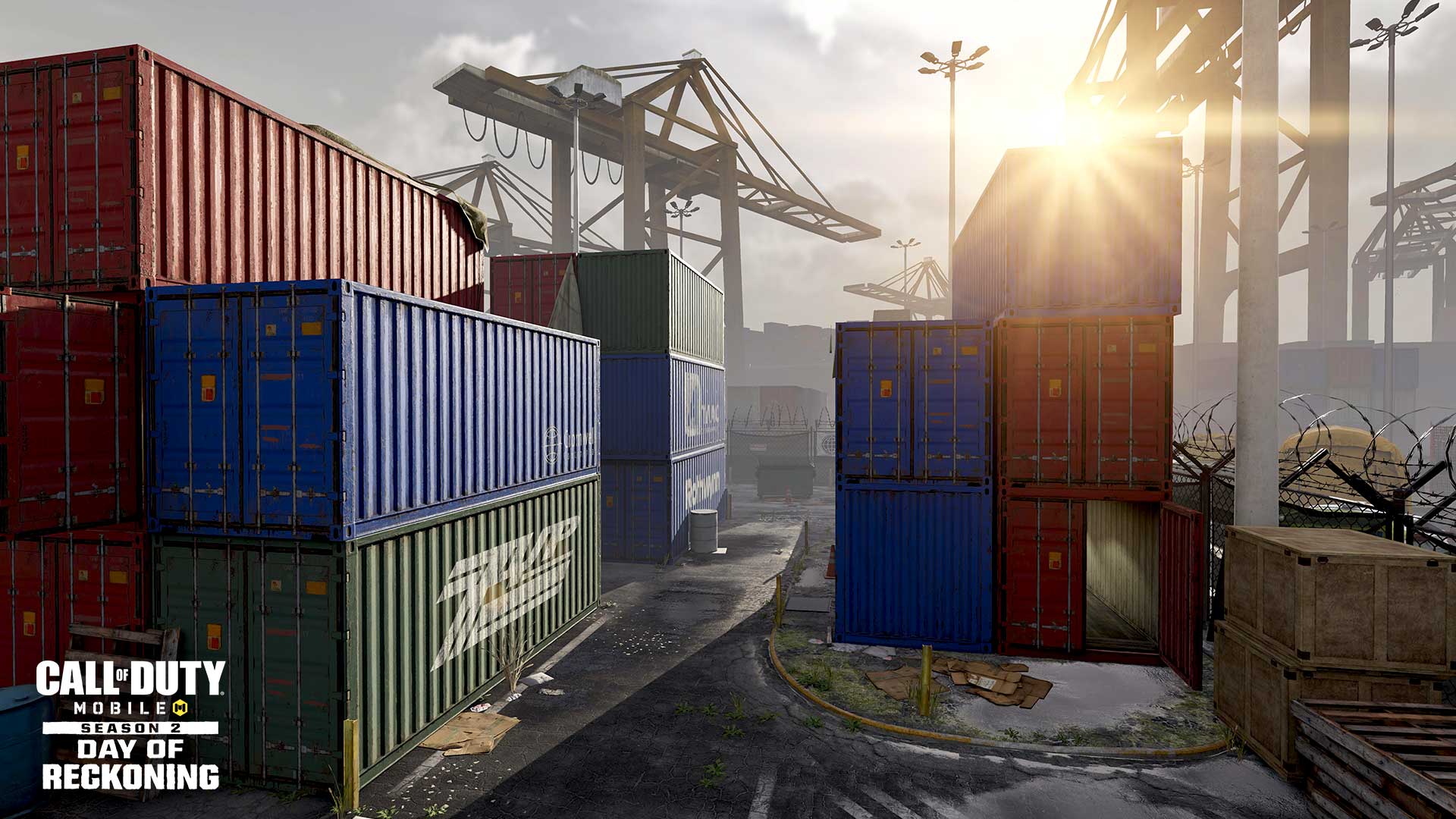 …then, earlier this year, Modern Warfare’s version of Shipment arrived as part of Season 2: Day of Reckoning. 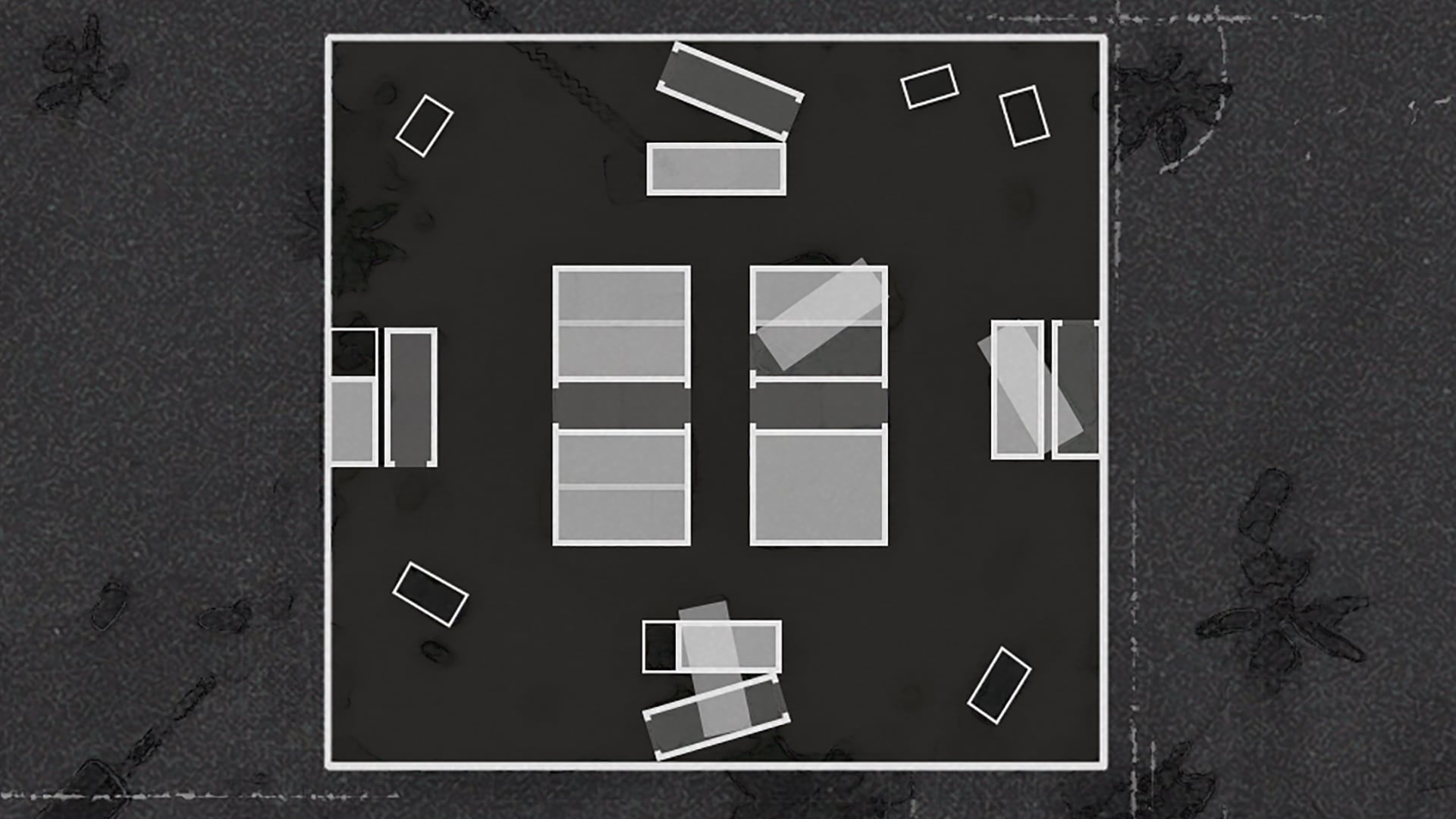 How does the seventh iteration of Shipment stand out from the rest?

First, the map returns mostly to its original form, skewing some of the containers so not all are parallel. It also adds containers across three of the sets, provides some additional interior space with two open containers at the center, and slightly changes the objects and positions at the four corners.

However, two of the biggest changes aren’t on the minimap: the first change is a single container that hangs above the left (north) set on a crane. The second change is that numerous containers have breakable walls, specifically: 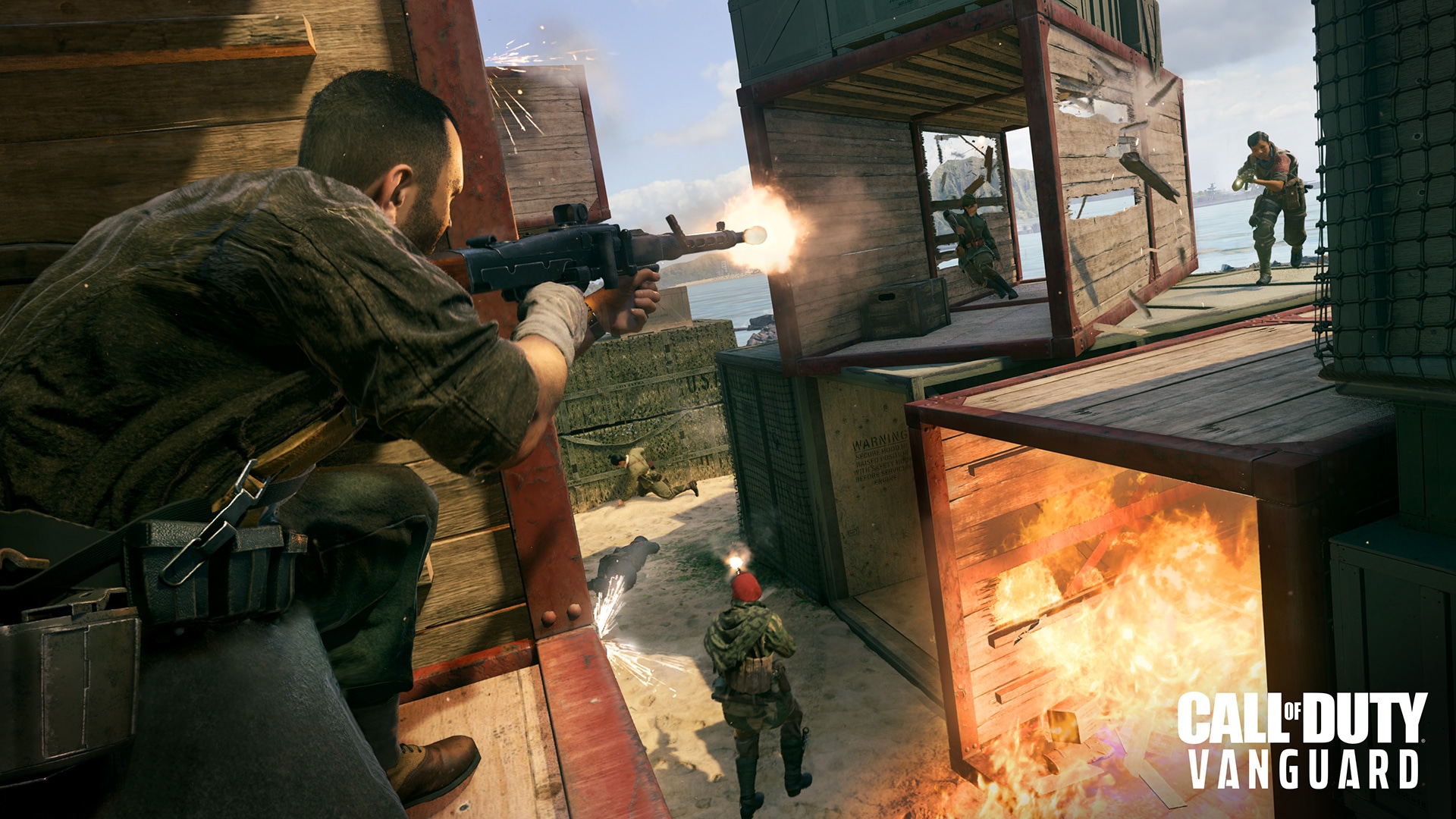 Although most veteran strategies will hold up on Vanguard’s Shipment, some of its different features allow for a few new tactics across all weaponry.

No matter what you use, it can be effective on Shipment, which is a great place to level up weaponry:

Sidearms: Super-effective in close-quarters, especially when Akimbo. Fast-moving Operators can be downright deadly using this as their Secondary but may want to avoid the more open perimeter.

Shotguns: Just like Sidearms, Vanguard’s Shotguns can be powerful in a confined map like Shipment. Stay mobile, especially through open space, and try blasting through the various destructible containers to catch enemies off guard.

Submachine Guns: While it won’t rip through containers as fast as a Shotgun, an SMG is viable around Shipment, given that most of these weapons have an effective range within the map’s boundaries. Those who have the Weapon Blueprints from the Task Force One Pack (via the Ultimate Edition) or Frontline Weapons Pack (via the digital version of Vanguard) will find them useful on this map.

Assault Rifles: Just like the SMGs, albeit with more range and firepower per shot, the Assault Rifle category can hold its own in most of Shipment’s areas, especially when shooting from the perimeter into the center. Try out some of those free Weapon Blueprints from the Season Six Battle Pass, especially the “Shredder,” which can rip up those shipping containers and the competition alike.

Light Machine Guns: The new destructible crates are begging to be destroyed by Vanguard’s LMGs. Be sure to tear through them to catch enemies and mount up on various cover pieces to control their recoil…But most importantly, ensure a squadmate is nearby for covering fire whenever you need to reload.

Marksman Rifles: These semi-automatic weapons can dominate Shipment’s lanes and make their presence known from the elevated containers, shooting those on the ground level.

Sniper Rifles: Long sightlines are a must when using Sniper Rifles on Shipment; these can be found on the perimeter, especially on the container near the crane. Given the map’s size, it may be a good idea to attach your rifle of choice with a lower-powered Optic or Iron Sights.

Launchers: Launchers could be multi-kill machines while also being absolute necessities to take down deadly aerial Killstreaks, which have just as little room to move as the Operators down below. They can also easily tear through the breakable containers, so prepare to blast away that cover, especially when playing Domination.

Melee: With bullets flying across the map every second, the Combat Shield is more than serviceable as a Primary Weapon or as a back shield Secondary via Overkill. Those who use traditional Melee tools in the Secondary slot may want to bring a Combat Shield and stay out of long sightlines as much as possible to get close enough to the competition.

Equipment: Tactical and Lethal grenades won’t have to travel far on this map to hit something. Use the Gammon Bomb or Demolition Charge to lay waste to containers, set a few S-Mines at the busy central intersection, or take the other throwables for some short cross-map hits. No matter what you use, ensure your Loadout has the Survival Training, Fortified, or Dauntless Perks to deal with explosives, tactical grenades, or suppression, respectively. 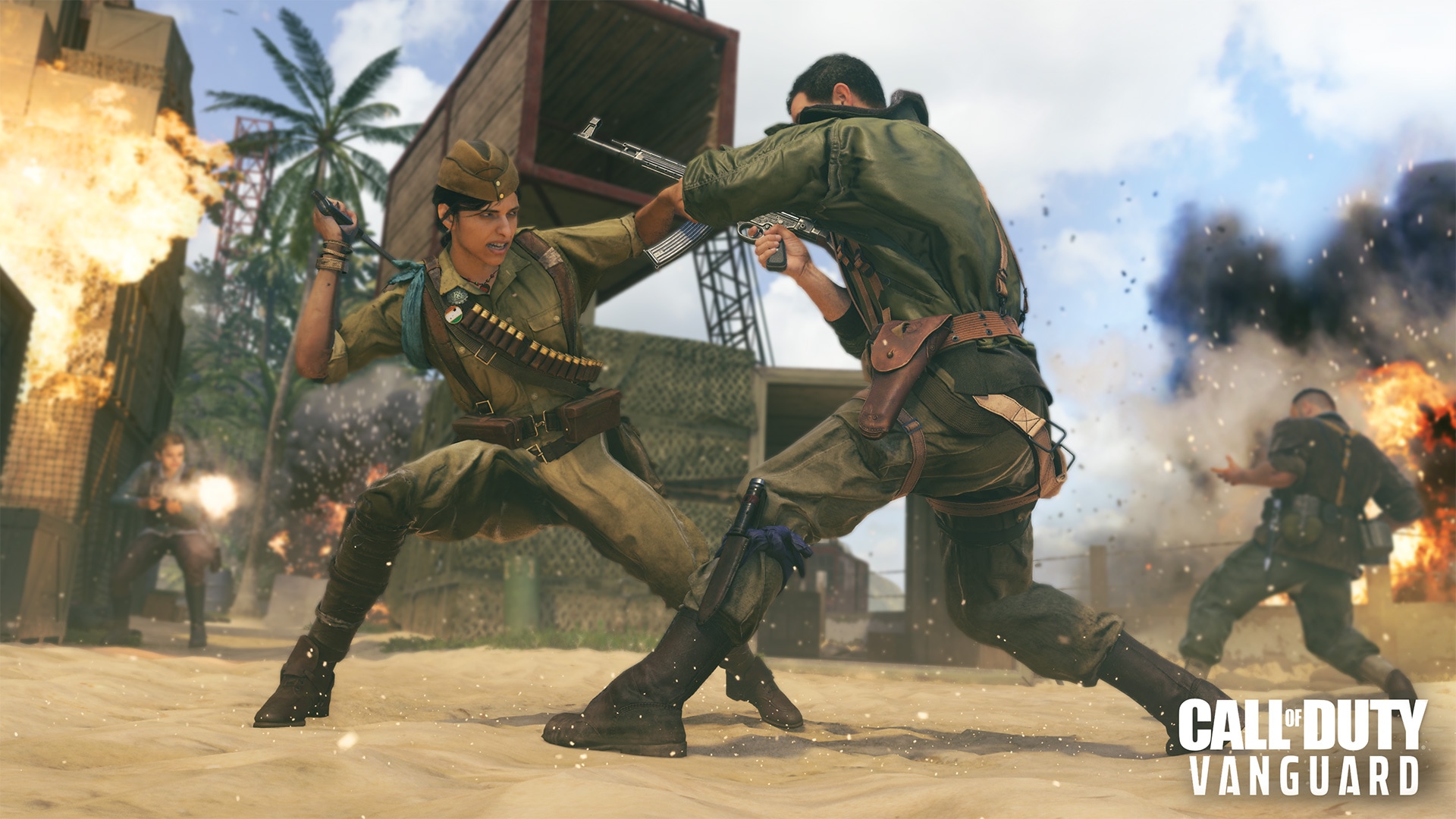 1. A Paradise for Progression. Given its small size and fast pace of play, Shipment can be perfect for leveling up weapons and Operators, especially via challenges. Those trying out Vanguard through the Multiplayer Free Access period can get a taste of this experience, then get the full game to help get their loadouts in ship-shape for Warzone Pacific.

2. It’s a Blast! The destructible containers offer great cover and obscurity from enemies at first, but soon become hollow husks as a match on Shipment progresses. Take matters into your own hands by running through, exploding, or shooting the wooden containers before the enemy has a chance to hide in them.

3. Don’t Blame It on the Crane. A sniper or other Operator who finds their way up to the raised container could be a nuisance, but dealing with them is as simple as shooting through their source of cover. There is an explosive barrel that can also be shot — this can easily blow away someone who decides to take up residence aboveground.

4. Preparation via Perks. The Perk 1 slot contains three options that all have use on Shipment: Survival Training for reducing explosives damage, Fortified for gaining immunity to tactical equipment pieces, and Dauntless to counter suppression. Consider which X-factor to gunfights most affects your ability to come out on top and plan those Loadouts around that Perk.

5. Objective Advice: Good Luck. Shipment 24/7 includes Domination, where one flag is at the center and the other two are placed at the corners. With quick respawns and plenty of action throughout, your best bet is to grit your teeth, fire away, and attempt to coordinate captures with multiple teammates.