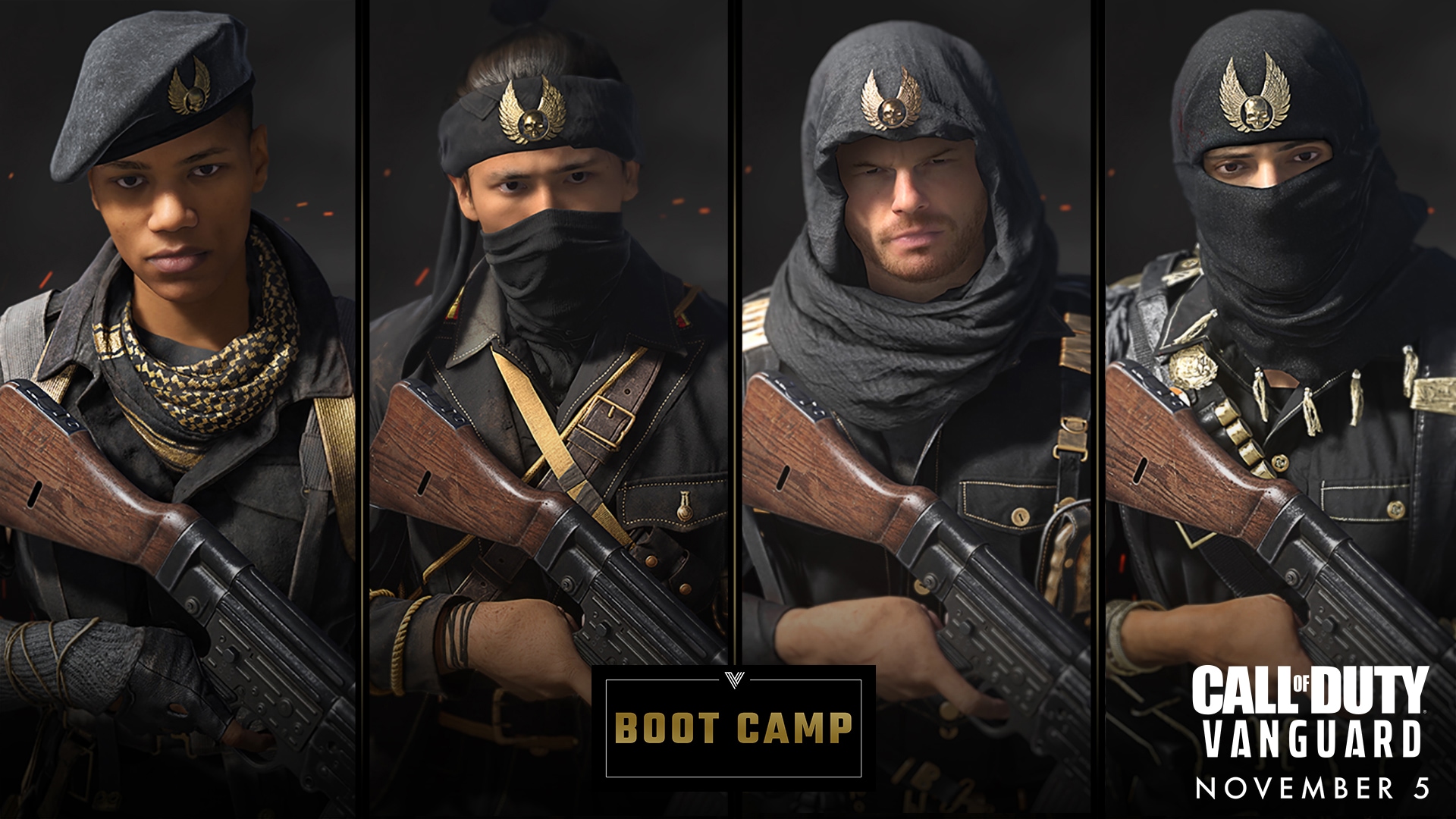 The only thing better than winning in Call of Duty: Vanguard or Call of Duty®: Warzone™ is winning with some squadmates and a little bit of swagger.

This year, Sledgehammer Games redefined what it means to be a Call of Duty® expert, introducing brand-new progression systems while making existing challenges more worthwhile. Part of this overhaul is an evolution of Regiments known as Clans, a social feature that rewards you and friends, family, or online squadmates for joining forces in Vanguard and Warzone.

Ready to become a Tier 1 Special Operations Task Force member? Time to rally the squad for Vanguard’s launch and read up on this important intel on progression, unlockable items, and more. 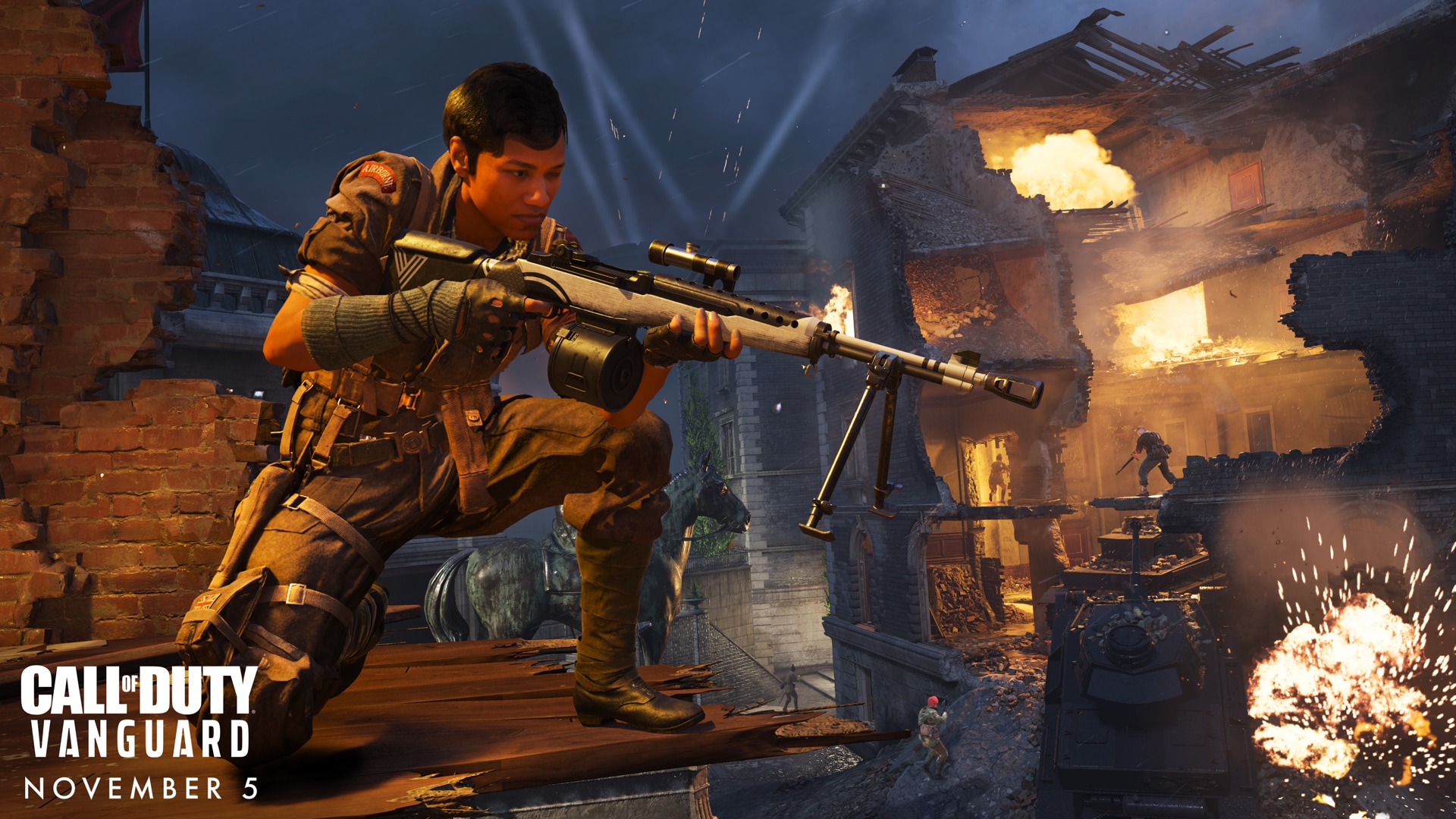 The Clan system is where a group of invited players — up to 100 — can gain exclusive bonuses, especially when they’re on the same squad. As part of the Clan, you gain the following benefits:

Already part of a Regiment before Vanguard? As of November 5, your active Regiment will be turned into a Clan. Feel free to continue playing with your old Regiment squadmates in the Clan system or create a new one.

Clans can be created or joined through the Social menu within Vanguard, and the entire system is planned to launch in Warzone during Season One.

The Drive to Rank 55 — Unlocking All Base Loadout Items 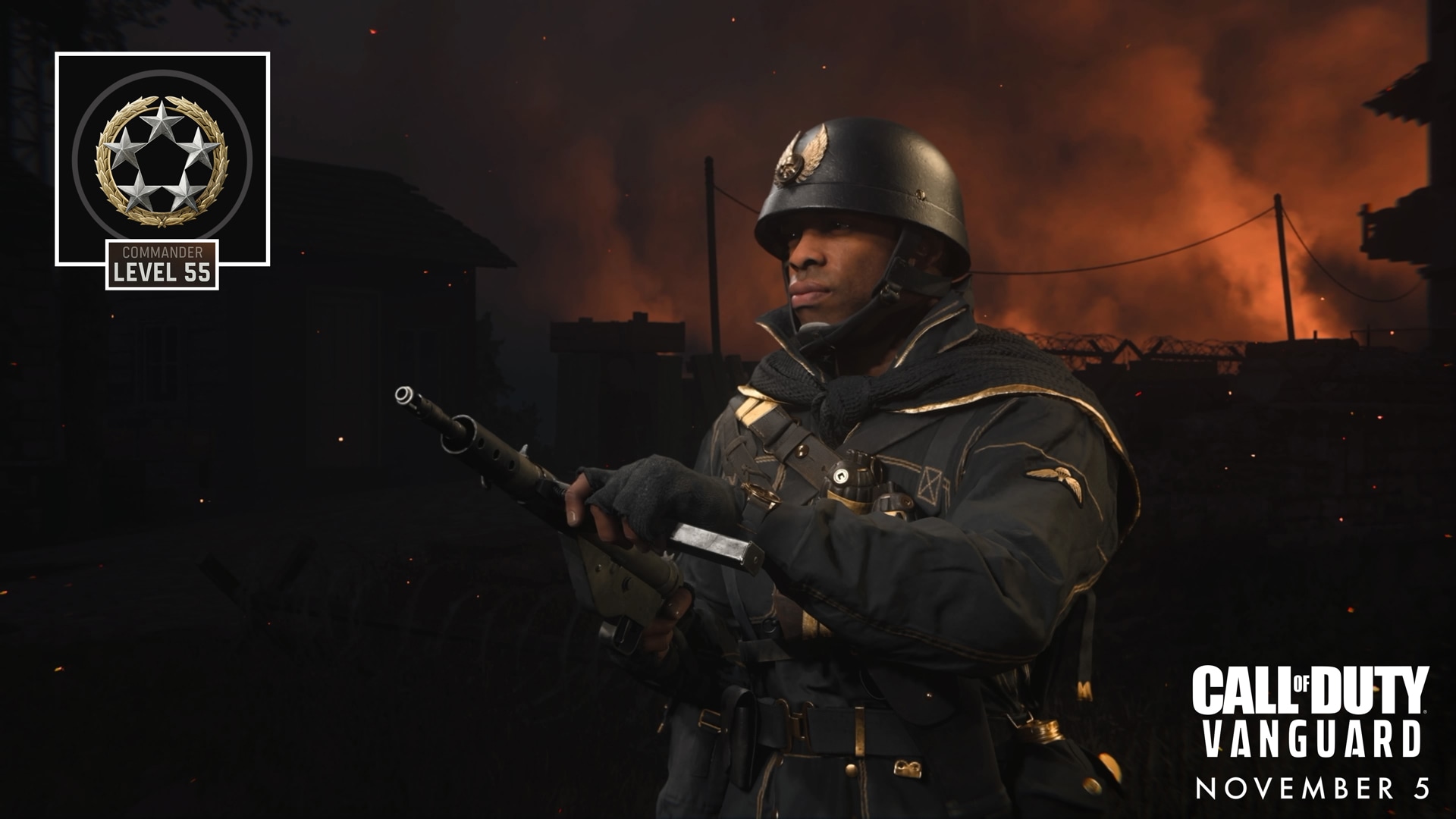 The 10% XP boost from playing with your Clan primarily helps with the main Call of Duty progression path: Player Levels, or the Rank and Prestige system.

For those entirely new to the franchise, the number and icon beside your name in-game represents your Player Level, the original symbol of Prestige since the original Call of Duty®: Modern Warfare® in 2007. Nearly everything done in Multiplayer, Zombies, and Warzone — kills, assists, challenges, completing objectives, and so on — awards Player XP, which ultimately increases Player Level.

At first, Player XP is crucial for getting from Rank 1 (Private) all the way to Rank 55 (Commander). Along this path, you unlock the ability to customize a Loadout and gain access to every base option within it, such as 38 weapons and 18 Perks, as well as Field Upgrades and Killstreaks in Multiplayer, plus Legendary Covenants and additional Crafting Table items in Zombies.

You’ll unlock a set of Career Challenges right at Level 1. Complete all 6 Challenges in each category, and you’ll earn an animated Mastery Calling Card and a bigger XP payout!

Shown within the Challenges tab — next to Battle Pass and Barracks in the Multiplayer or Zombies menu, respectively — Career Challenges grant large Player XP bonuses and cool Calling Cards upon completion. As the name suggests, these Challenges are meant to be completed over the course of your Vanguard Career, so tackle them at your own pace and don’t miss out on tens of thousands of Player XP! 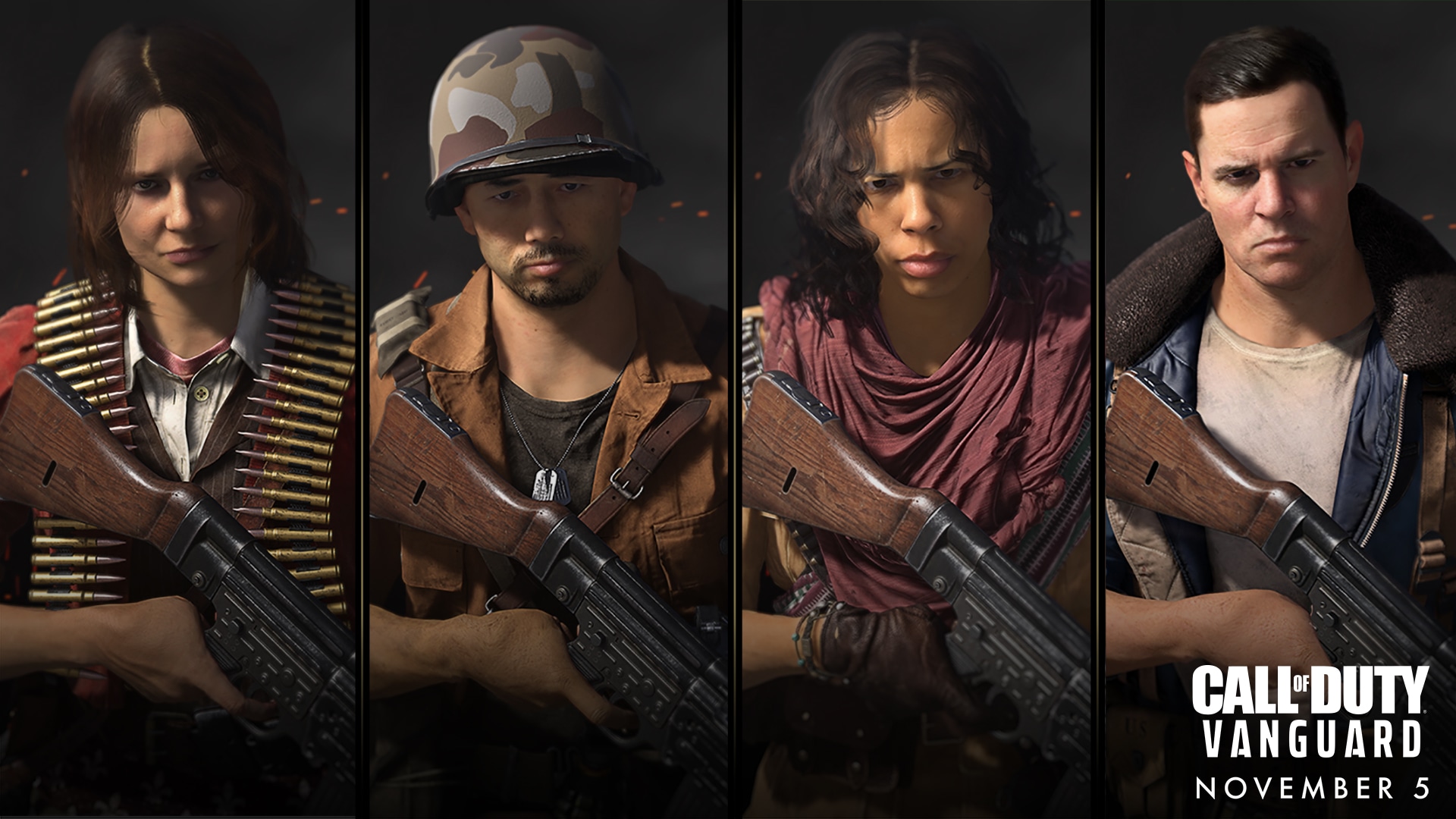 After earning enough Player XP to ascend past Commander within the Military Ranks, you will enter the Prestige Ranks, a Season Level system meant to recognize the community’s most skilled and determined players. This system will be like the one used in Call of Duty®: Black Ops Cold War and Warzone over the past year.

Those who get beyond Commander automatically receive their first Prestige — Prestige 1 — and start at Season Level 1. At this point, all your unlocks, including Loadout items, will be kept as you ascend the Prestige Ranks.

During the Preseason, you can reach up to three Prestiges:

Outside of a cool new rank icon beside your name and a higher rank number, reaching each Prestige awards you with a free Battle Pass Tier Skip. In addition, reaching Season Level 50 grants you a new Weapon Blueprint, exclusive to those who reached that point in the Seasonal Prestige System.

When Season One begins in December, your Season Level will reset (but you’ll keep your unlocks) and your progress will resume from the highest Prestige you achieved during the Preseason. Every season offers four additional Prestiges across the first 200 Season Levels, as well as a new Weapon Blueprint at Season Level 50.

Hitting the maximum Prestige of that season — 3 for the Preseason, 7 for Season One, 11 for Season Two, and so on — will award you the title of Prestige Master. Those who do not reach the highest Prestige during a previous season will have a chance to catch up, as players can hit up to Season Level 1000 during a typical season. Any leftover Prestiges will be earned every 50 levels, and for those who already hit the maximum Prestige, they can still go up to Level 1000 to prove their ultimate mastery of that season of Vanguard and Warzone. 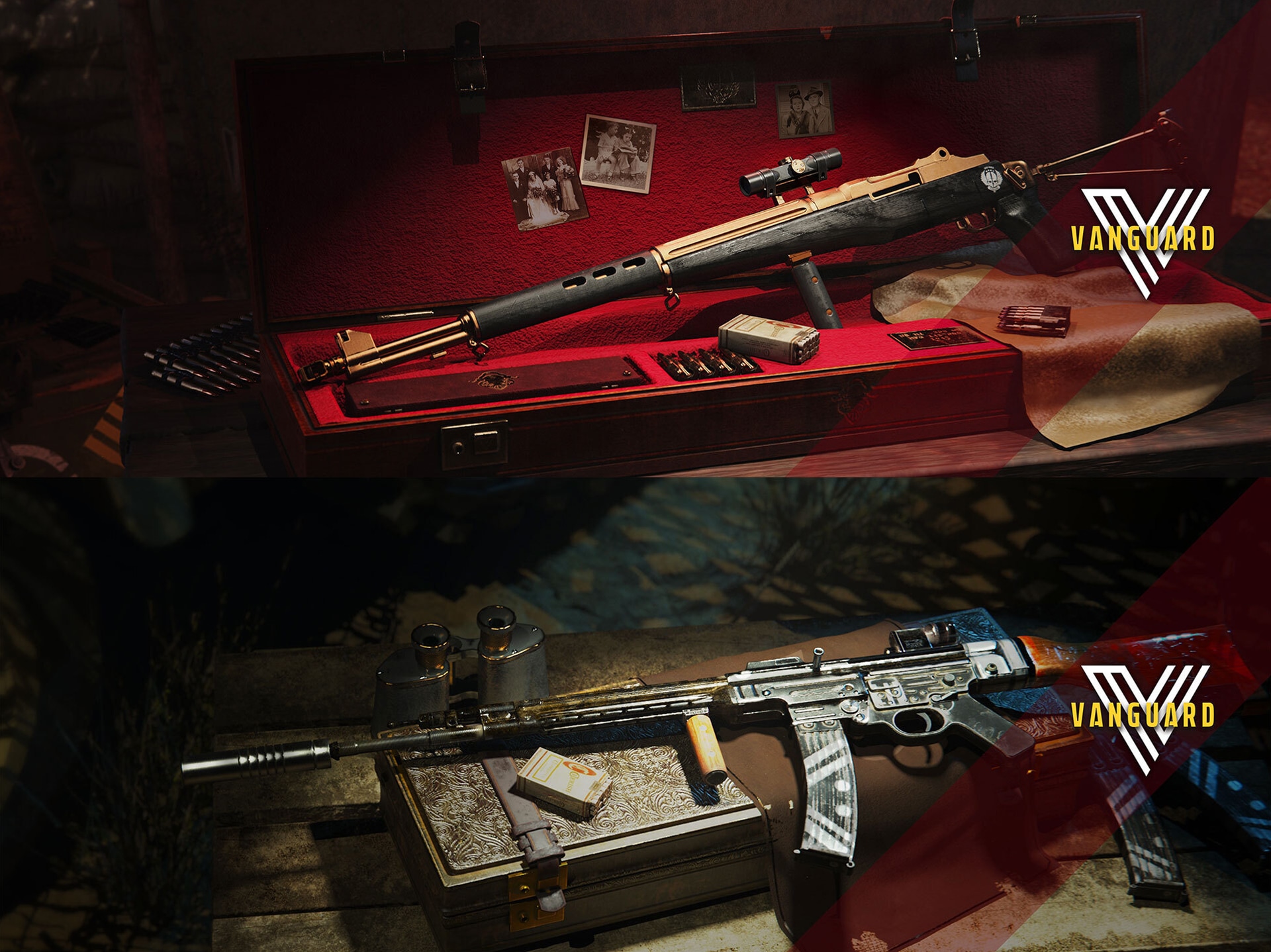 Along with Prestige, the Battle Pass is another seasonal reward system based on 100 Tiers of content, which includes multiple free Tiers that offer fully functional weapons, Weapon Blueprints, and more.

After the Preseason, expect to earn 100 Tiers of Vanguard and Warzone content through the Season One Battle Pass. Look forward to more seasonal Battle Passes to come in 2022. 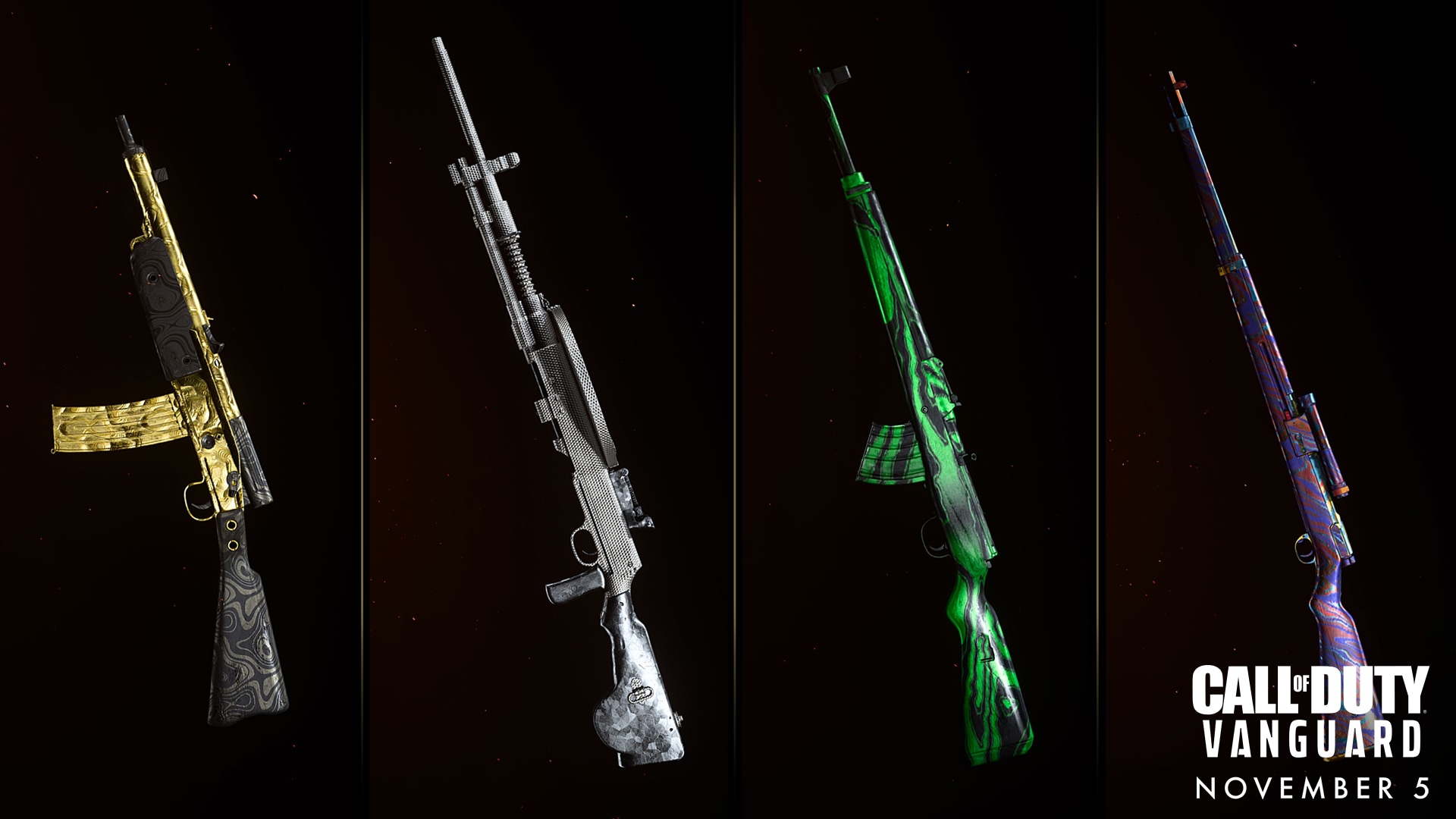 While playing Multiplayer or Zombies, you can earn Weapon XP on any weapons that can be used in a Custom Loadout.

In using a base weapon or Weapon Blueprint in either Multiplayer or Zombies, you will gain Weapon XP for it. This XP will level up that weapon, granting you either new attachments to equip in the Gunsmith (via the Loadouts menu) or a set of Camo Challenges, an objective set that tests your mastery of that weapon.

There are two different types of Camo Challenges — one for Multiplayer and one for Zombies. All objectives within those sets differ, depending on the weapon’s type. As you complete Camo Challenges, you will unlock cosmetic wraps for that weapon, ranging from mil-spec designs to absolute works of death artistry, like the last Multiplayer Camo Set labeled “Death Artist.”

Ranged Primary Weapons typically have 70 Weapon Levels, with Handguns, Launchers, and Melee tools having different level caps to reflect the number of available attachments or lake thereof. Reaching a weapon’s level cap means unlocking all its attachments and Camo Challenges.

After reaching that cap, you can complete that weapon’s Multiplayer and/or Zombies Camo Challenges to prove your mastery. Showing this expertise across one — or multiple — weapons rewards you with even more Camos; click through the carousel below to see what you can unlock via Vanguard’s Camo Challenges.

NOTE: This does not include Reticle Challenges, which grant new marking patterns for a specific Optic attachment across multiple weapons. 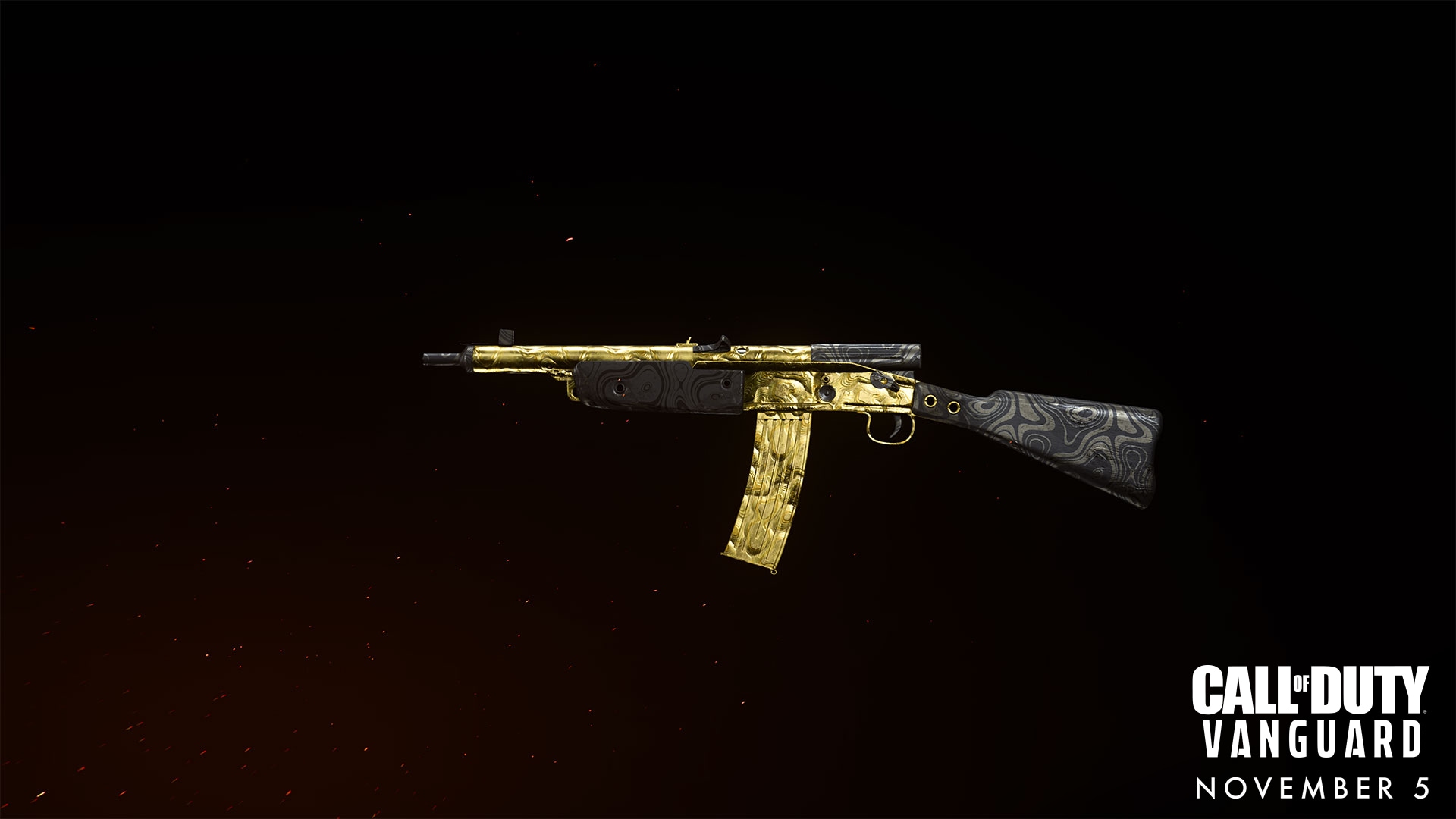 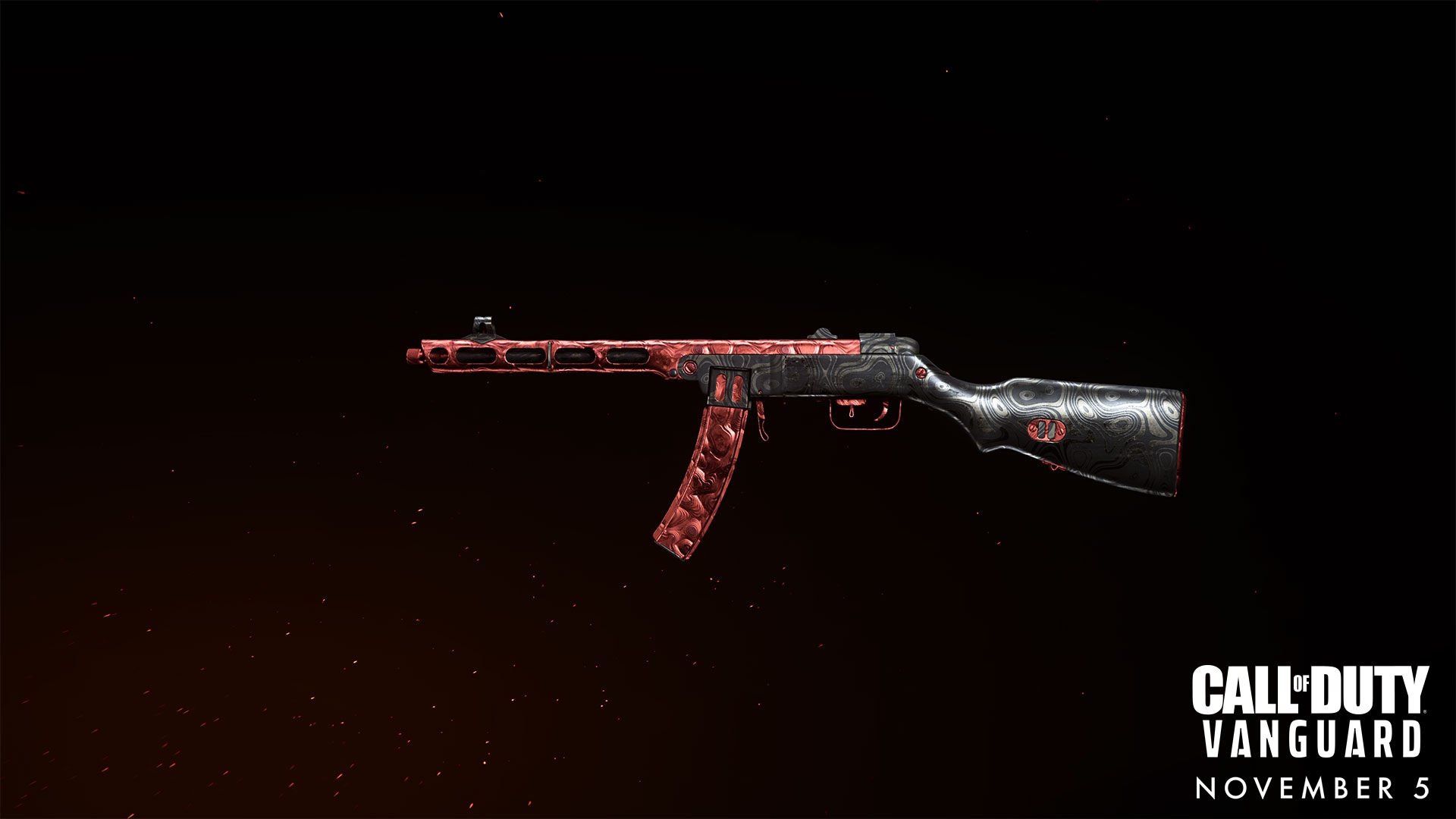 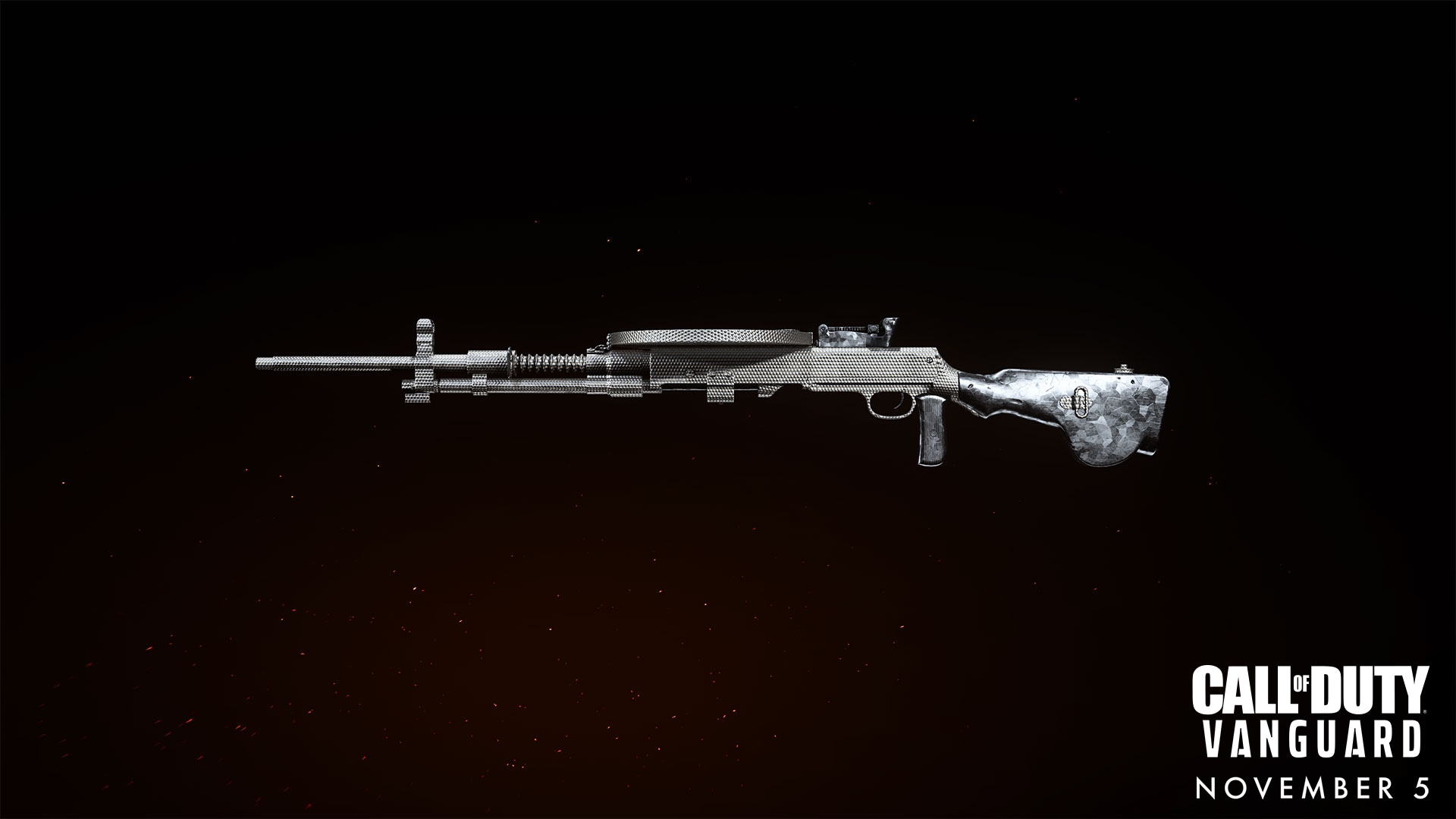 Diamond Camo: Unlocked by completing all Multiplayer Camo Challenges for a specific number of base weapons of a specific weapon type, such as LMGs or Shotguns (DP-27 shown). 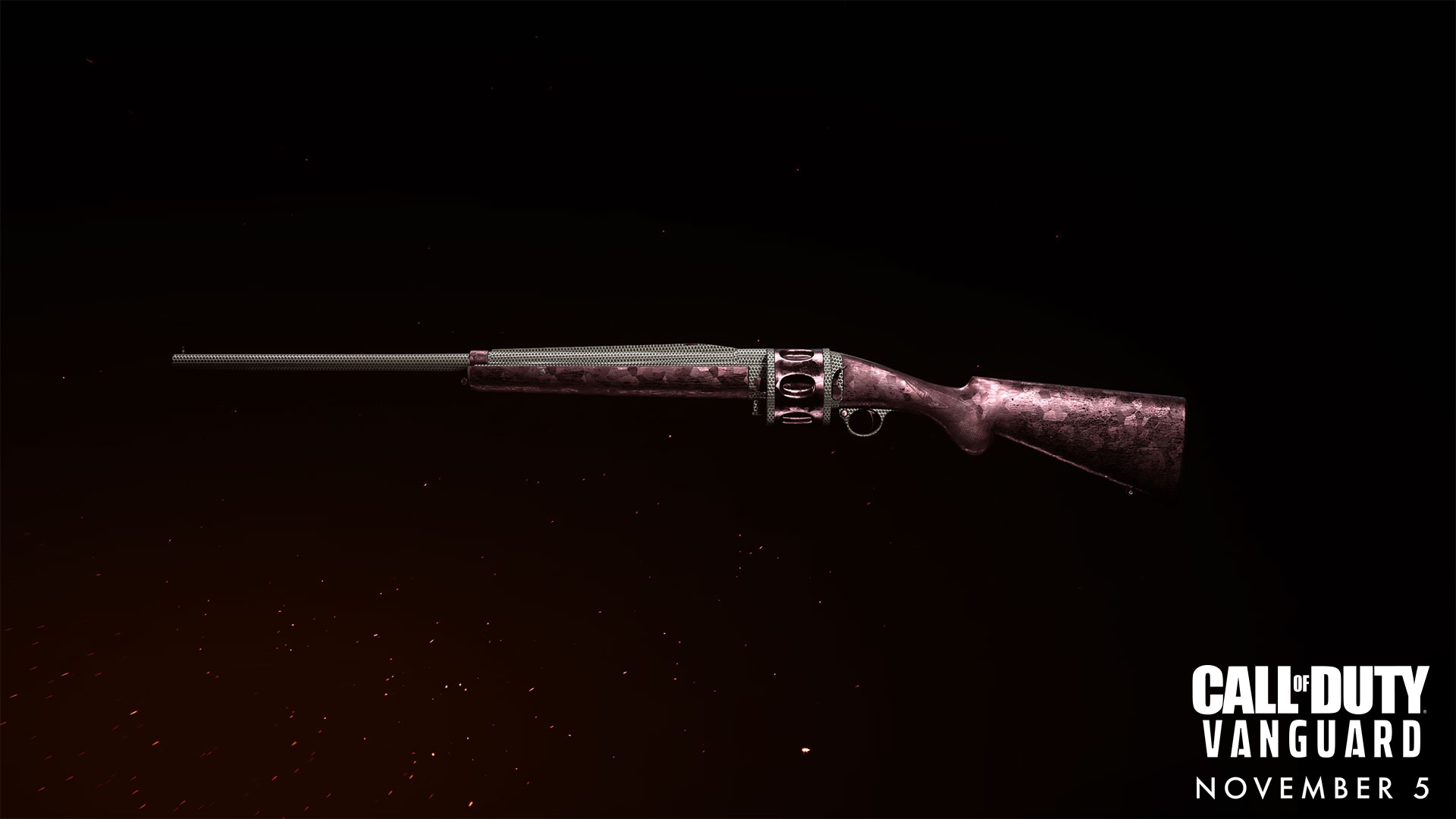 Plague Diamond Camo: Unlocked by completing all Zombies Camo Challenges for a specific number of base weapons of a specific weapon type, such as LMGs or Shotguns (Einhorn Revolving Shotgun shown). 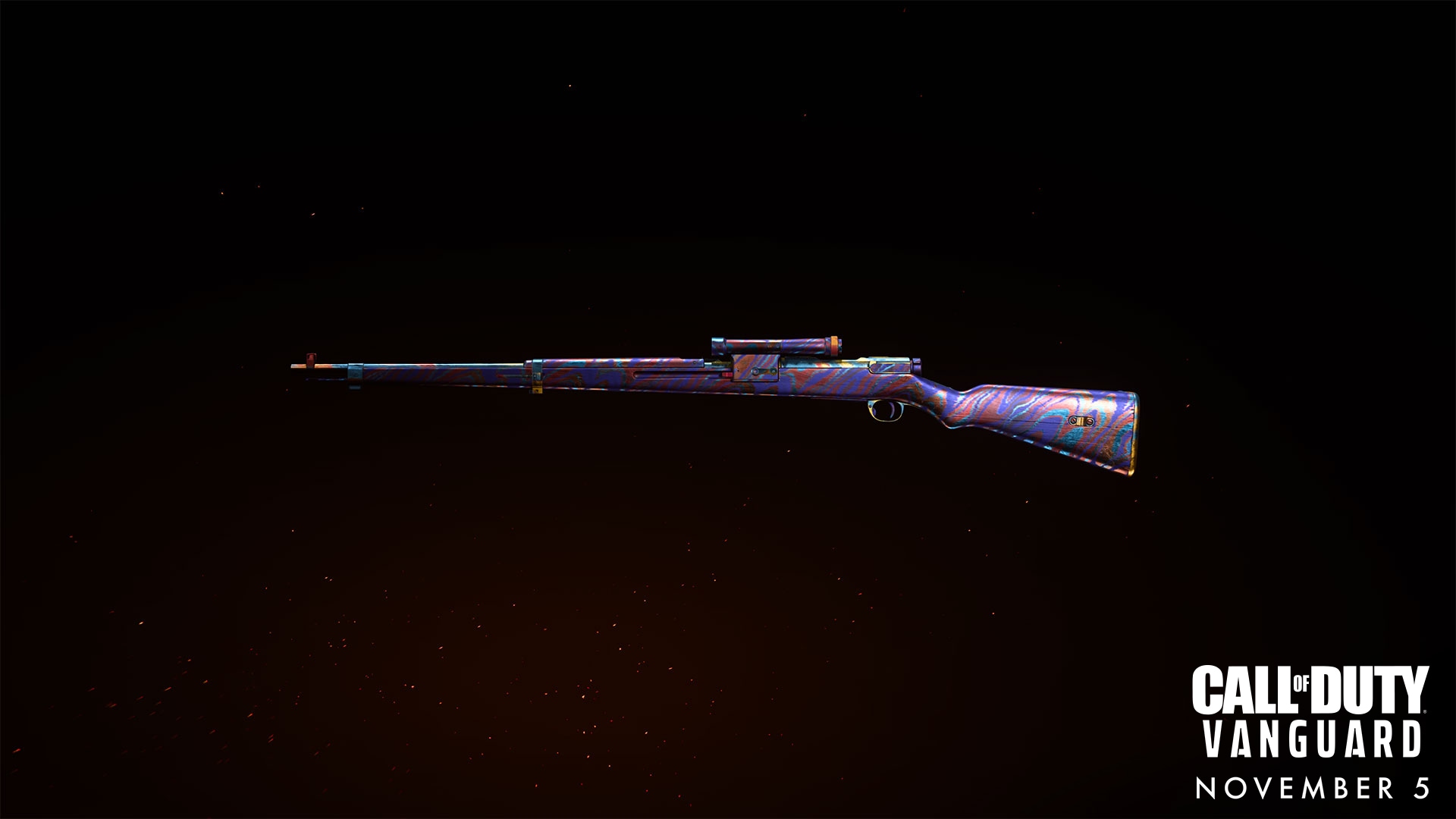 Atomic Camo: Unlocked by completing all Multiplayer Camo Challenges for a specific number of base weapons (Type 11 shown). 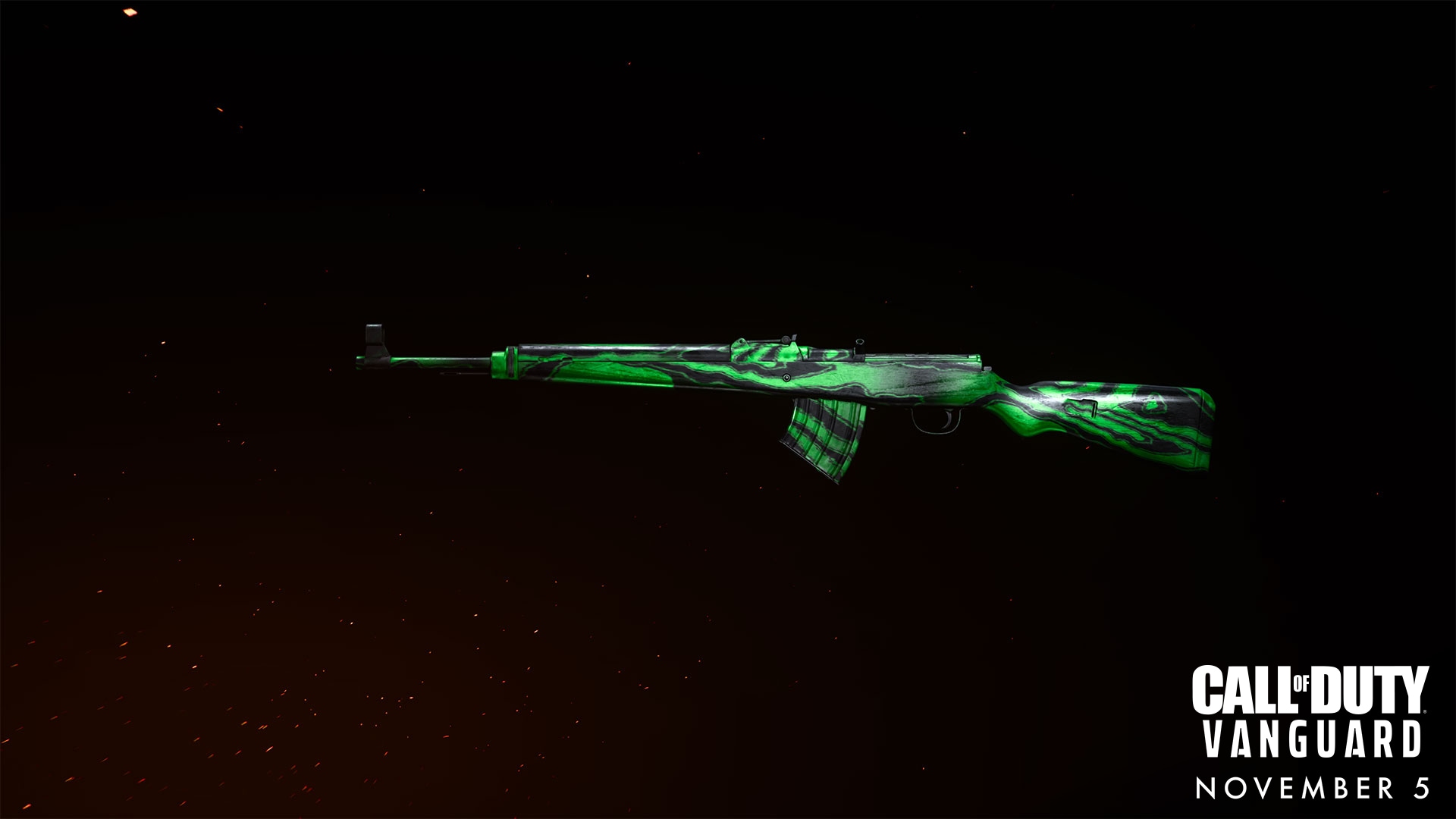 Dark Aether Camo: Unlocked by completing all Zombies Camo Challenges for a specific number of base weapons (G-43 shown).

In addition to Player XP, Battle Pass XP, Weapon XP, and Clan XP, there is one more progression system that makes its debut in Vanguard: Operator XP.

Operator XP is crucial to earning new items for your Operators, who come to life in Vanguard through their own unique backstory trailers and preferred weaponry.

Before earning even a single Experience Point on an Operator, you must first unlock them by completing an Operator Challenge. Click below to see how to unlock all 12 base Operators in Vanguard Multiplayer (and in Warzone once Season One begins). Note that there are also unique Operator Challenges in Zombies, so players can choose which mode they’d like to play to unlock a specific Operator. Once unlocked in either mode, Operators will be available across modes. 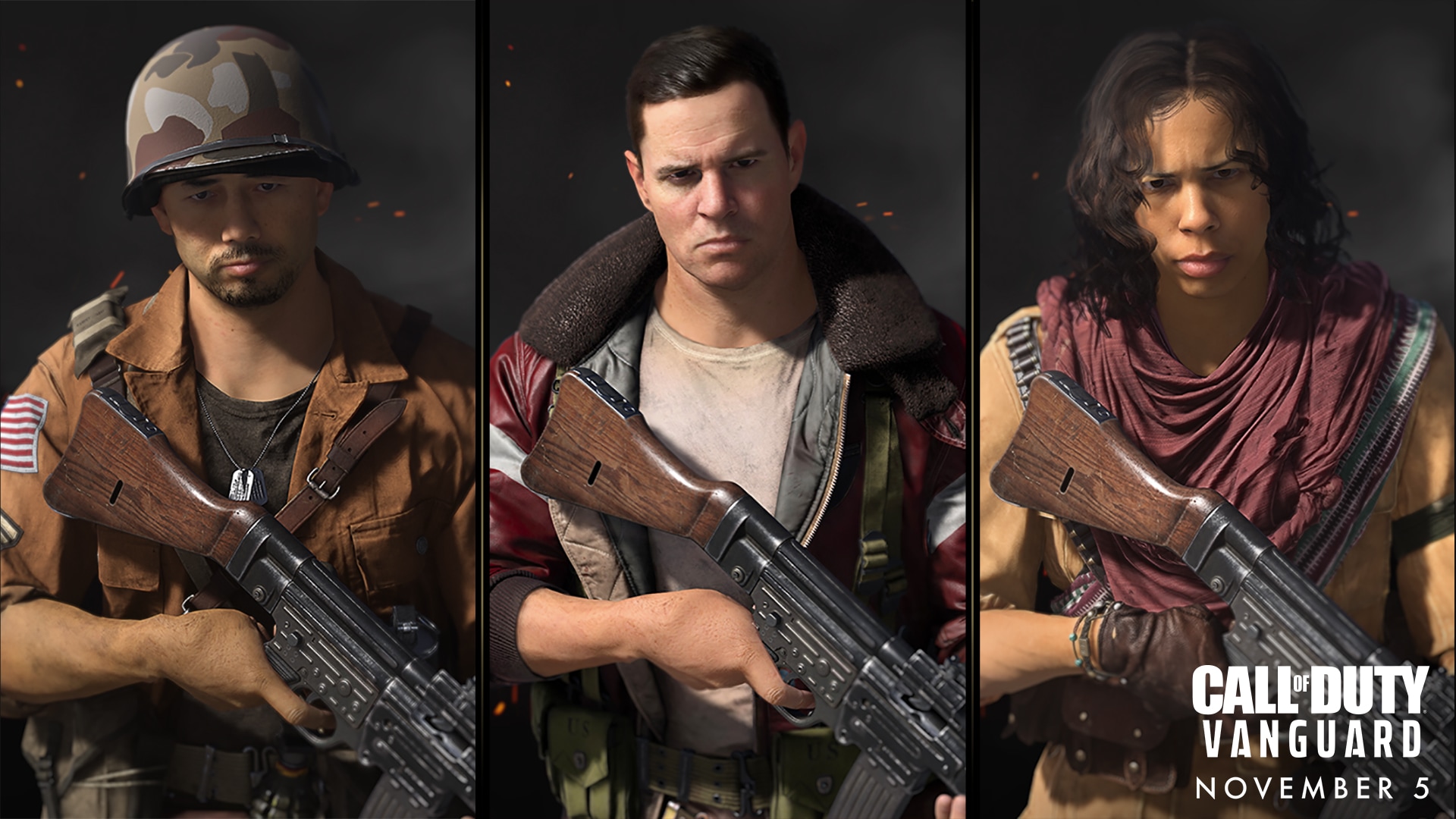 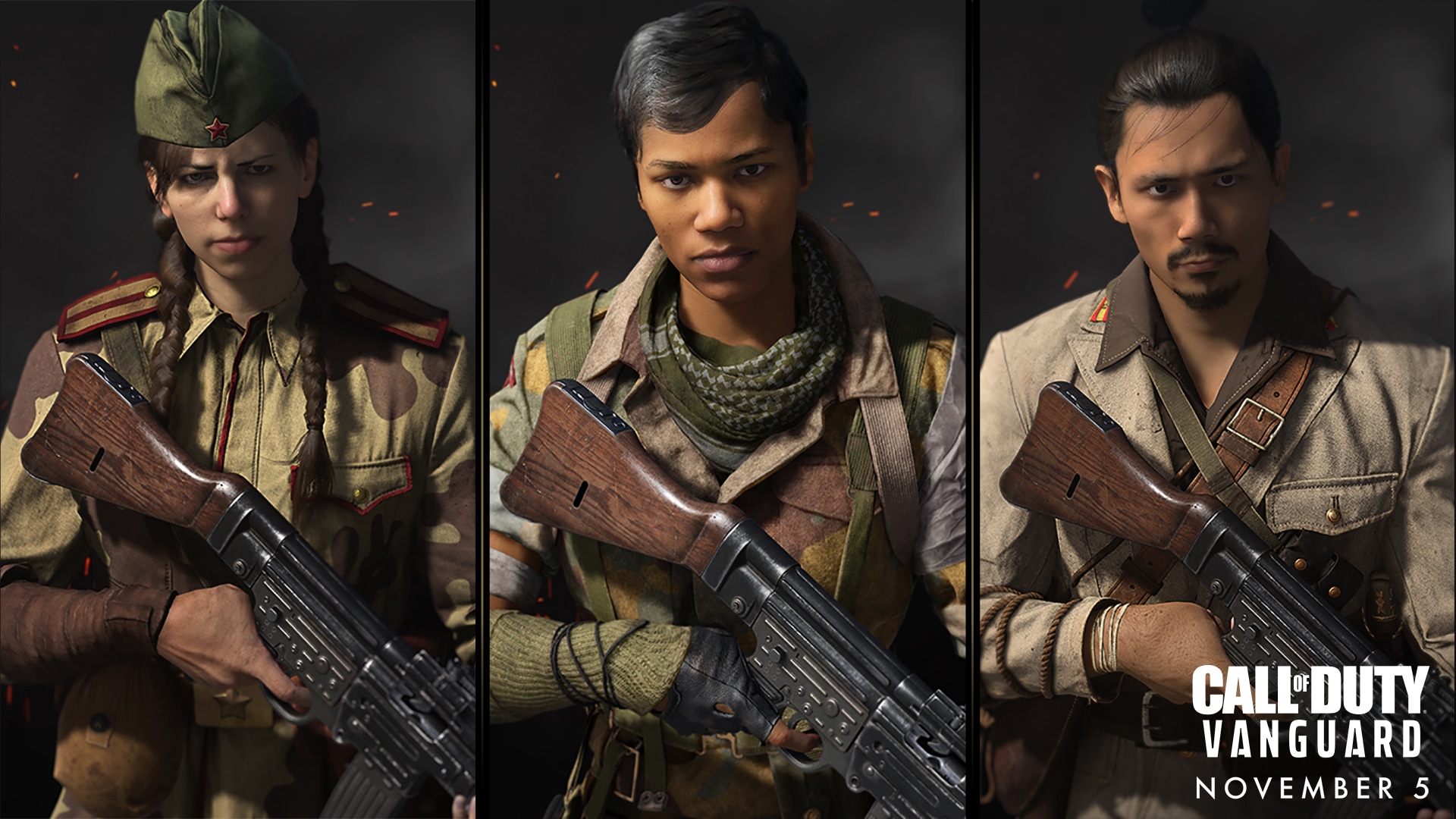 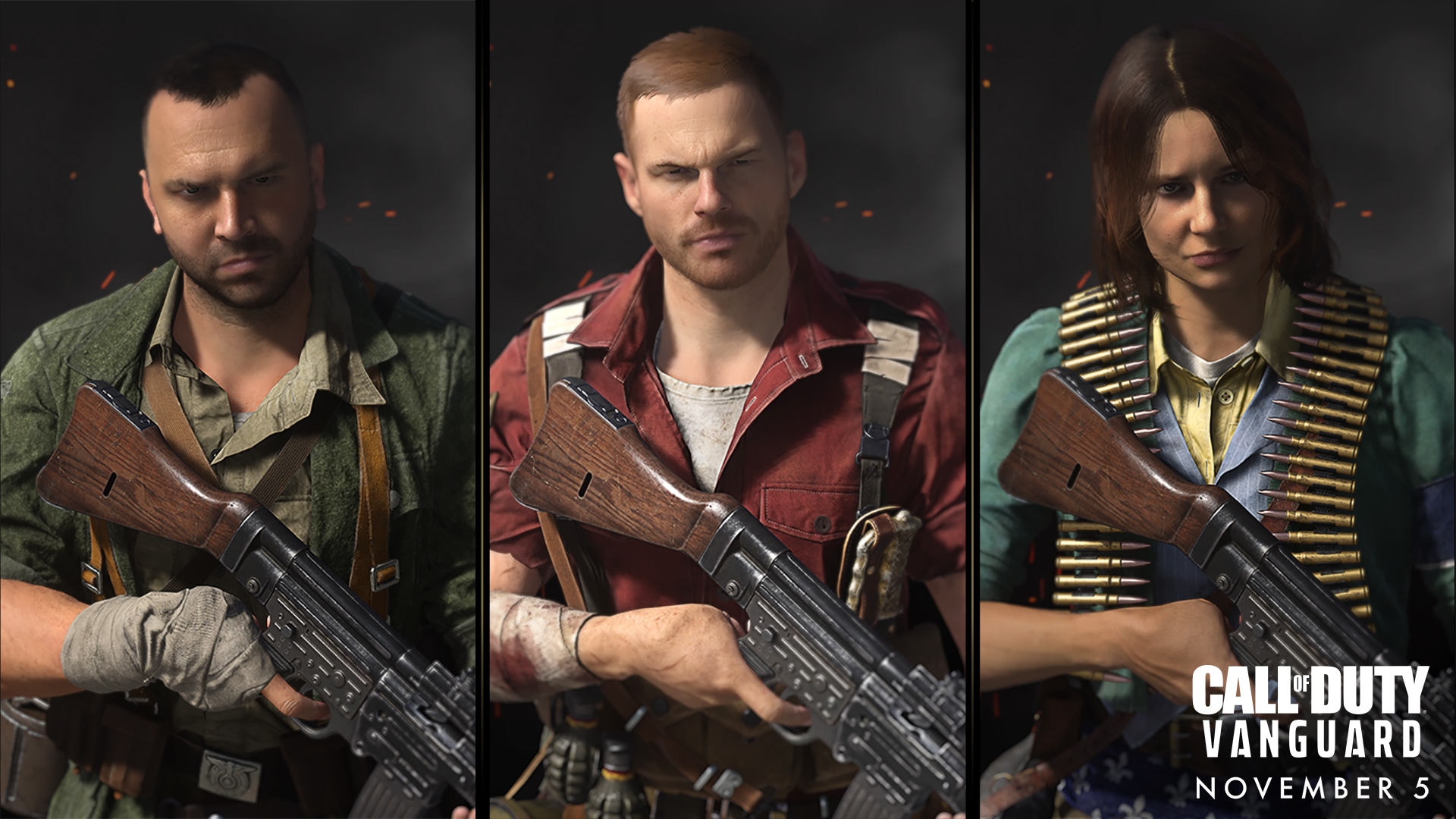 Beatrice: Get 5 Kills Without Dying 10 Times 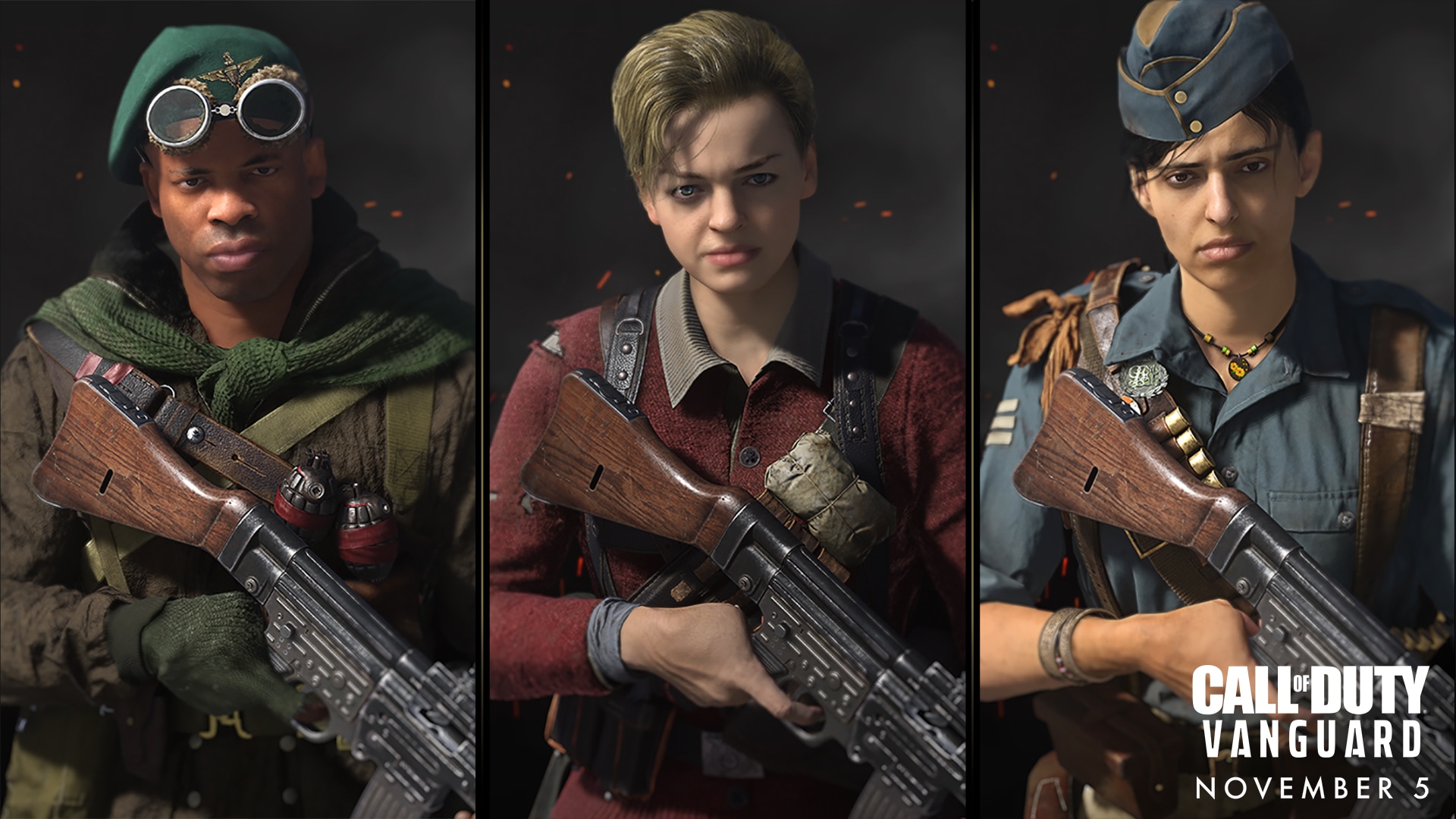 Arthur: Get 10 Kills with Killstreaks

After unlocking an Operator, you can level them up to Level 20. Do this by simply playing Multiplayer or Zombies (and Warzone, starting in Season One) with them — just be sure to select them within the Operator menu, then go out and play the game.

Two ways to speed up Operator XP earnings are participating in Operator Challenges and using their Favorite Weapon. Using Sentinel’s leader Arthur as an example, here’s what his Operator Screen and Challenges Screen looks like: 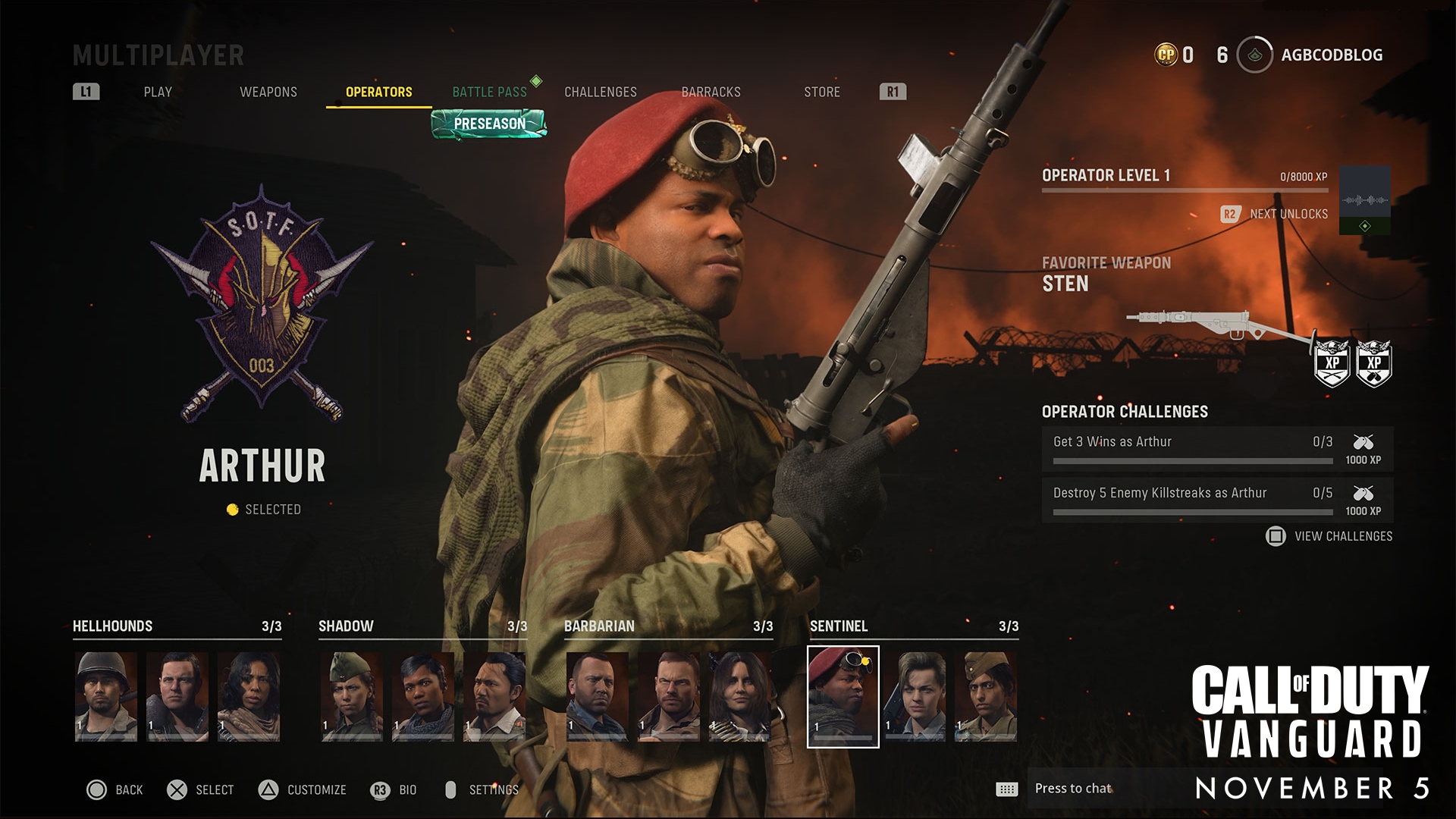 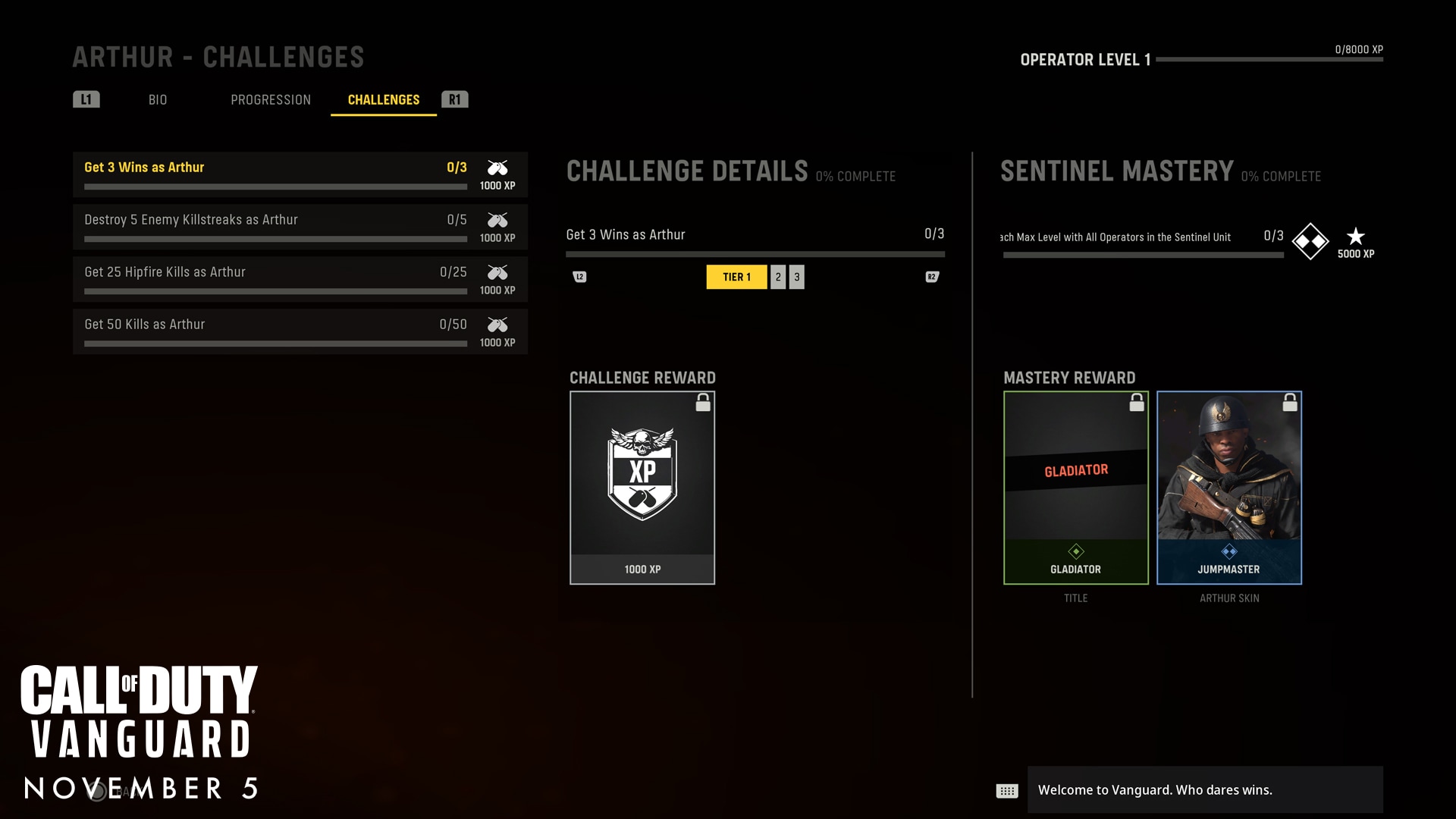 Those who want to level up Arthur quickly will want to play as him while using the Sten and attempting to complete his four Operator Challenges.

While leveling an Operator to 20, you will unlock new Quips, or voice lines that play during specific in-game moments; Player XP; Weapon XP for the Operator’s favorite weapon; Emblems; and more. Levels 10 and 20 are solid milestones for each Operator, indicated by a new Operator Skin at each of those levels.

You can also earn two additional Skins for each of the 12 Operators: one gold-trimmed outfit, earned by having every Operator in a unit at Level 20, and one badass Platinum uniform, earned by hitting Level 20 with the full dozen.

Give It 110% by Stacking XP, Show Off Your Accomplishments in Vanguard and Warzone 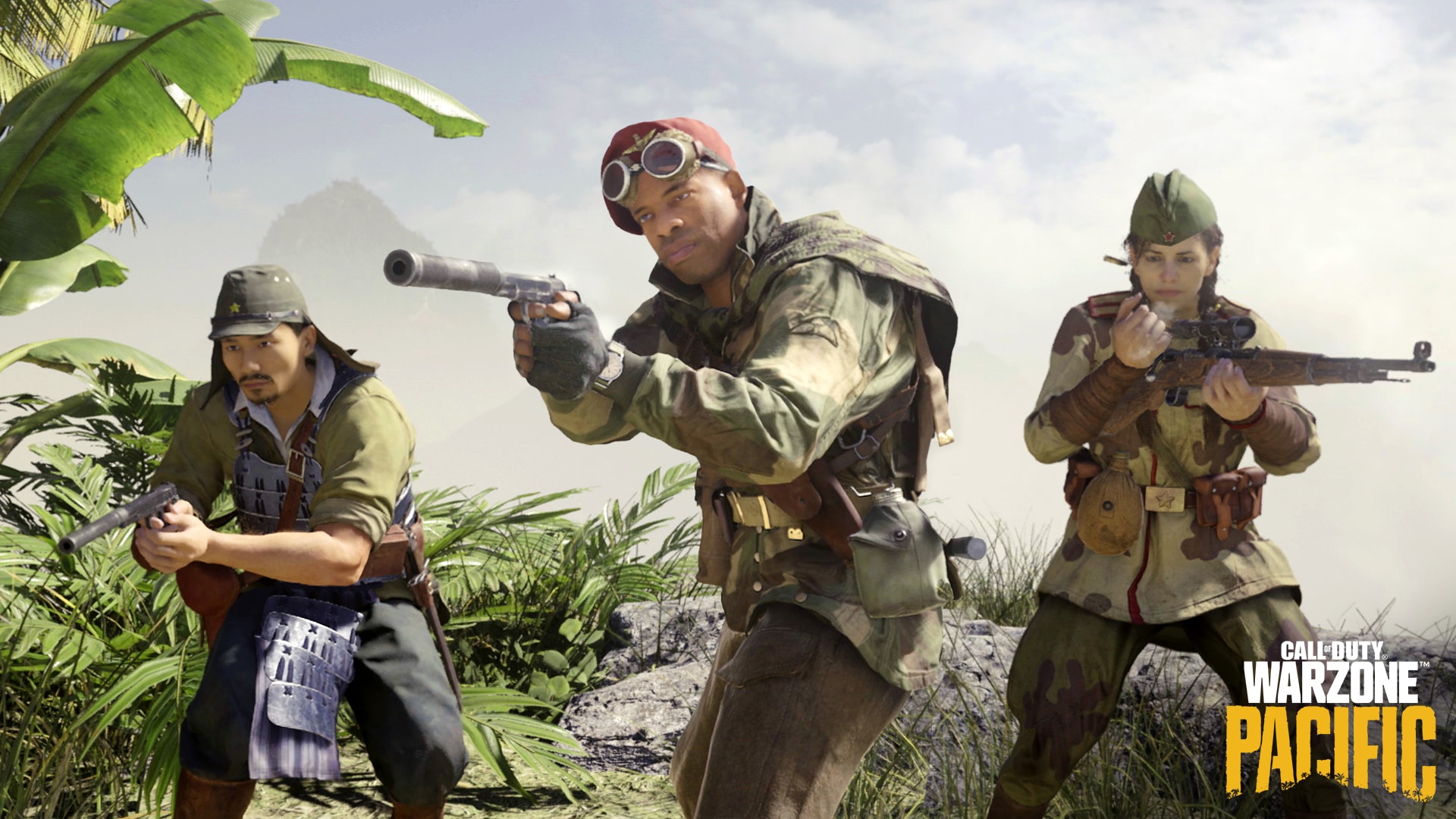 The most elite players may have already figured out how to maximize their XP gains once Vanguard drops, but let’s break it down with one last example using Arthur and his Sten:

- As Arthur, using the Sten in a Multiplayer or Zombies match boosts Operator XP and Weapon XP.

- In using the Sten, you can complete Camo Challenges for it, which grants Player XP bonuses on top of any XP earned during the match.

- You can also be on pace to complete a Career Challenge, such as winning matches or getting crouched kills, which award even more Player XP.

- While playing with Clanmates, you get a universal 10% XP boost to all those XP types — Player, Operator, and Weapon — in addition to Clan XP, which is always being earned.

- All the while, you are earning Battle Pass XP, important for earning Tiers that grant additional items like Weapon Blueprints or Double XP tokens, a way to speed up unlocking even more content!

In playing Vanguard, you will be constantly rewarded for playing the game well, challenging yourself, and teaming up with friends. Whatever you unlock is a testament to your skills, and should be shown off proudly in the Multiplayer and Zombies lobbies.

In addition, those Multiplayer unlocks — weapons, Camos, Operator Skins, and more — will also be in Warzone right at Season One. By that time, if you are dropping in with your fully leveled Clan as a Platinum-wearing Operator and busting open that Loadout Drop to use some Atomic camouflaged weapons, then consider yourself among Call of Duty’s most elite players.