Your guide to Double Agent, the newest mode in Black Ops Cold War 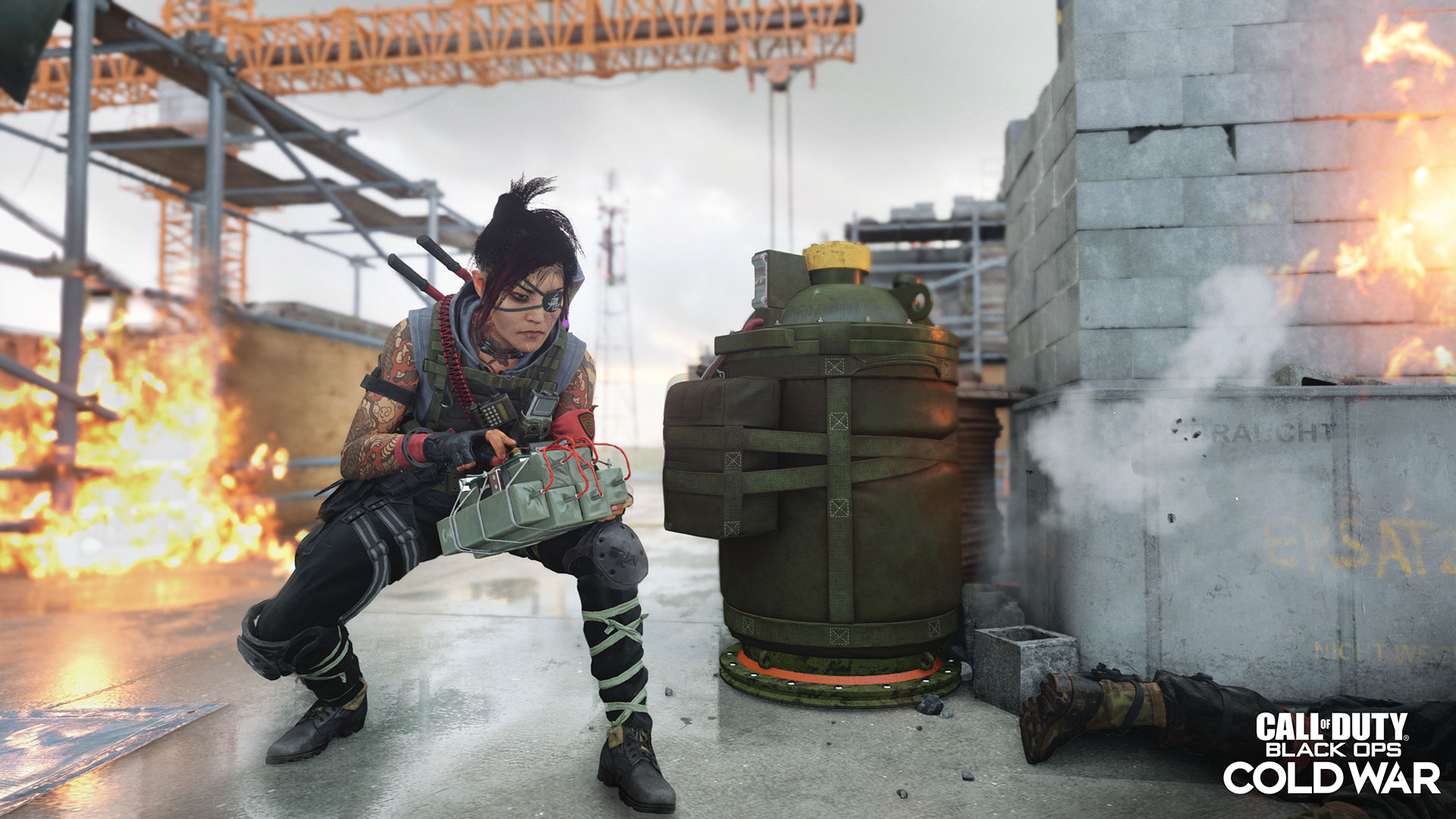 In Season Five of Call of Duty®: Black Ops Cold War, the Numbers Program has gone on full broadcast, altering the minds of Operators on both sides of the war. There are now spies in our midst.

You’ll need to be quick mentally and physically for the tasks ahead in the new Double Agent Multiplayer game mode. You’ll also need clear communication, via either voice or text chat, to figure out who is friend or foe, all while keeping your head in a game of deception.

Whether you’re an Operative, an Investigator, or a treacherous Double Agent, here’s what you should know to get the job done… no matter what the job is.

Double Agent is a round-based game mode designed for up to 10 players in either public or private match play. In each match, every player is assigned one of three roles — Investigator, Operative, or Double Agent — and nobody knows the other players’ roles until they drop evidence confirming their allegiance.

Before each round, all players are given a starting pistol and 25 seconds to equip weapons — Weapon Blueprints you may already be familiar with in your standard Loadouts — and items found on the ground, in nearby containers, and in indicated weapon caches.

Once a round starts, bomb locations will be marked within the world and on the mini-map, in addition to a “Next Clue” icon counting down to when that clue will become available.

Using this clue and others found around the map, as well as evidence from eliminated players, the Operatives and the Investigator must discover and eliminate the Double Agents. If they do, or time runs out before they can destroy the bombs and Operators, then they all win the round.

However, the Operatives and the Investigator must also be cautious of who they attempt to subdue, as friendly fire will not be tolerated. Any attempts to take a fellow Operative’s or Investigator’s life will cost you your own.

The Double Agents can win in one of two ways: eliminate all Operatives and the Investigator, or plant and detonate all bombs. When a Double Agent plants a bomb, it takes about 30 seconds to detonate, so the investigating team will need to react fast to defuse it before it explodes and disperses radiation into the area.

If they play their roles well and their cards right, Double Agents and the Investigator can also gain access to Skills: powerful abilities like Tactical Equipment, Field Upgrades, and Scorestreaks that can drastically alter the outcome of a round.

Here’s an in-depth look at the roles you will play in rounds of Double Agent: 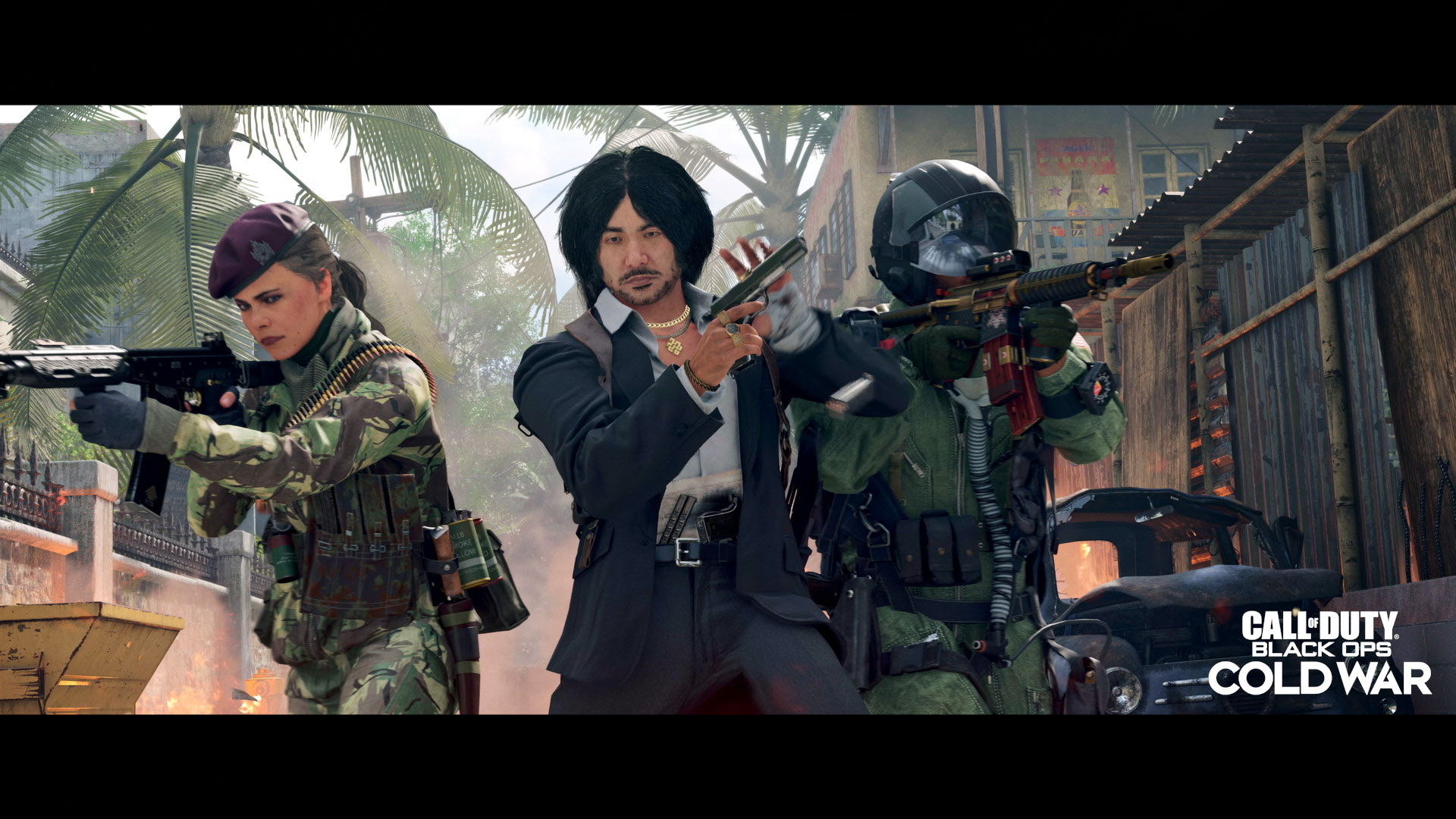 Know Your Role — Operatives and Investigators

More often than not, your experience will be as an Operative or Investigator, no matter if you pledge allegiance to NATO or the Warsaw Pact.

In a standard 10-player game, you have a 60% chance of being assigned the Operative role.

A good Operative helps to uncover the identity of the Double Agents. To do so, they must help gather clues, communicate any kind of suspicious behavior, and ultimately pull the trigger on suspected Double Agents.

At the beginning of a match, a radio will appear somewhere on the map. After decoding the message from this radio by interacting with it, the first clue about a Double Agent’s identity will be revealed. Subsequent clues — and radios — can be found elsewhere on the map after each message is decoded.

Often, these clues are tied to details about the various Operators in the match.

In an example game, let’s say Kitsune is one of the Double Agents. In this scenario, we’ll collect evidence like “The suspect is female” or that the Double Agent has an “even number ID.” Each player has a number ID, found both beside their overhead name in-game and on the in-game leaderboard. These IDs are used for quick callouts.

In the case of Kitsune, the Double Agent we’re tracking, we now know that our suspect is a female and has an even number ID. With this information, we can now start by identifying all female Operators with an even number ID and go from there.

If you haven’t managed to uncover the Double Agent’s identity by now, you’ll be given some more specific assistance with the third and final clue, which will show you the general location of the suspected Double Agent. This clue will ping an area on your minimap and in the world, providing the suspect’s last known location. The location will update several times before disappearing.

Be careful though, as wise Double Agents will attempt to confuse Operatives and the Investigator by sticking close to other players, making it difficult to isolate them. 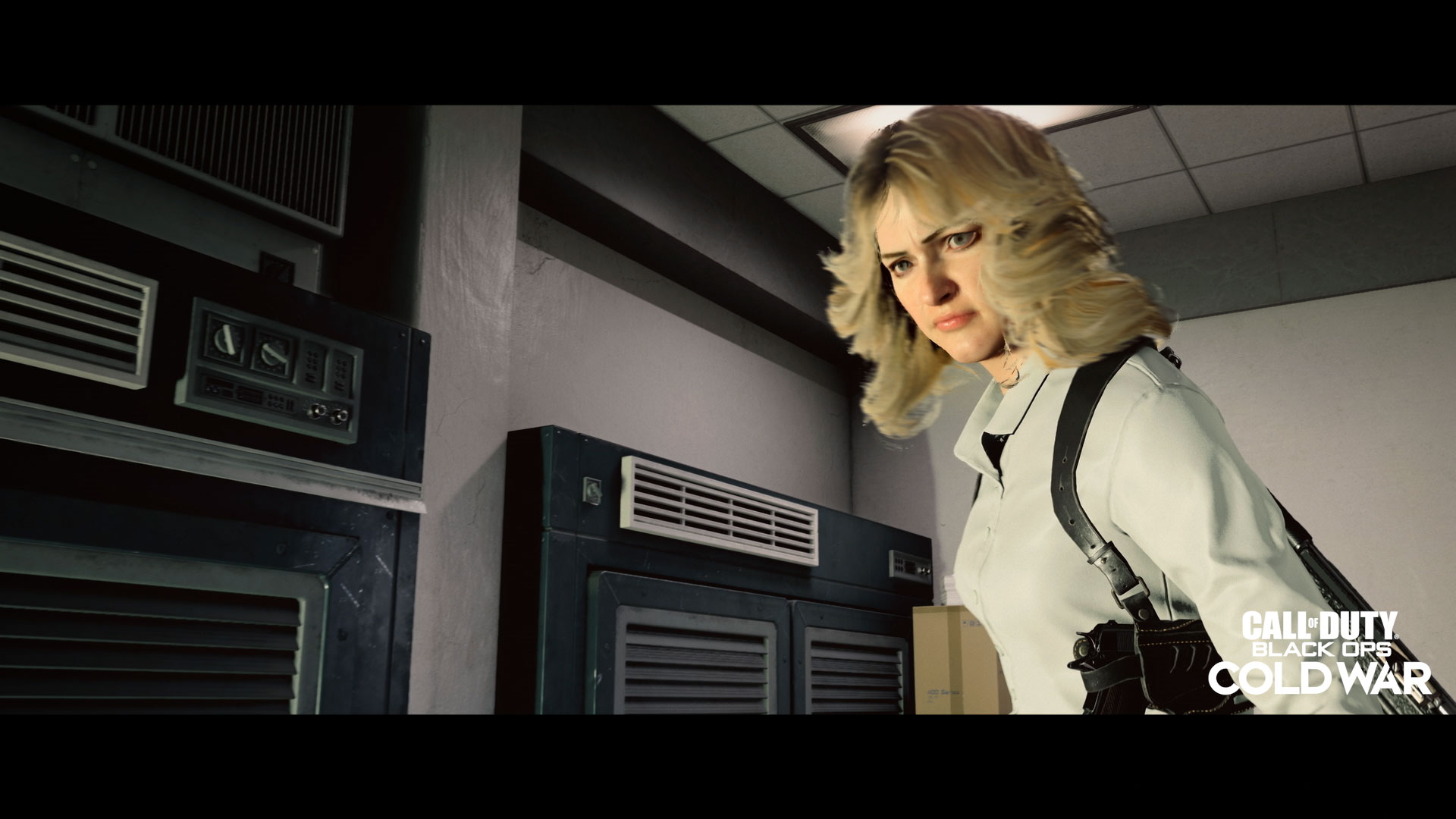 Marked with a blue shield and star icon over their head, the Investigator is a special Operative. Whether they’re a rookie or a grizzled veteran, they have unique abilities that can eliminate even the trickiest of Double Agents.

The first of these involves Autopsy Reports: readouts of a player’s time since death, the weapon that was used, and the dead player’s role that is dropped on their body. Anyone can view this information by interacting with the report on the ground. However, Investigators will also be able to show the killer’s footsteps — similar to the Tracker Perk in Multiplayer — allowing them to see where the killer came from before the deed was done.

Second, should an Investigator have a hunch (as any Investigator would), they can target suspected Double Agents with a Wanted Order. This marks any player on the map as “Wanted” with an icon above their head… even if that player is an Operative with a bad alibi. With that said, Investigators must use this ability with caution, as everyone will be sure to track down a “Wanted” agent if they’re marked as one. If your Investigator leads you astray and has suspected an Operative, it’s on you if you decide to pull the trigger.

Finally, Investigators gain access to specific Skills for earning score in the match, similar to Scorestreaks in Multiplayer. These Skills include the Trophy System and Stimshot used to provide protection and support for their Operatives, as well as a Hand Cannon, with the latter being important both for eliminating Double Agents in one shot or neutralizing their most powerful ability… 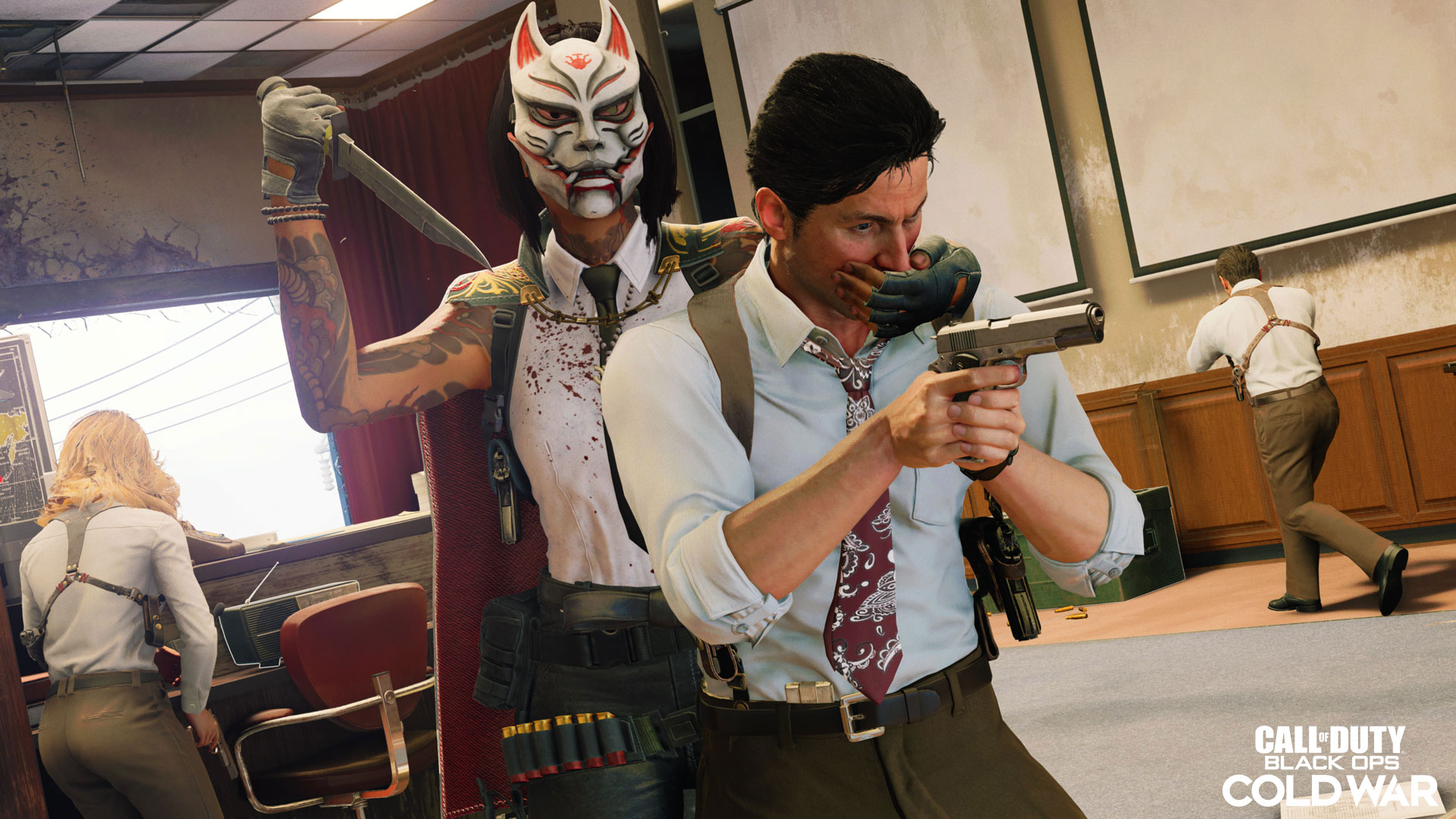 Ready to join the ranks of a Double Agent? If you’re one of the players randomly assigned to this role, you’ll be tasked with turning your back on the Investigator and Operatives to take the win.

The Double Agents must work together to deceive the others into thinking they’re innocent while working to undermine them, either by eliminating them or by successfully setting off bombs throughout the map. As a Double Agent, you’re vastly outnumbered, so be smart about it.

To help eliminate the opposition, Double Agents have access to the following:

Another special Double Agent ability involves Field Mics, which can be activated around the map. Just like the Field Upgrade in a standard Multiplayer game, Field Mics will reveal enemy positions on your mini-map once activated. This can provide crucial intel about an Investigator’s or Operative’s movements, allowing you to track them down for a kill or use their location as false evidence. Be careful, however, that you don’t blow your cover and activate Field Mics near an Operative or Investigator, and note that Operatives and Investigators can destroy Field Mics outright to deny you of that precious intel.

Like Investigators, Double Agents also gain Skills for earning score in the match. Their Skills are Gas Mines, Counter Spy Planes, Combat Bows, and Attack Helicopters, the last of which can be the deadliest to the opposition. No Operative or Investigator can equip Cold Blooded, so if an Attack Helicopter gets into the air, it can easily wipe out an entire team and claim the round for the Double Agents.

Last but not least, Double Agents can gain access to Dead Drop Caches: powerful containers that contain unique weapons like Epic and Legendary Weapon Blueprints and the one-shot, one-kill R1 Shadowhunter crossbow. These destructible cases can only be opened by Double Agents, so Operatives and the Investigator should either destroy them before they can be opened, or note if someone is standing suspiciously close to one…

Feel like Double Agents get to have all the fun? Think again. There are plenty of containers around the map that have additional gear, as well as the occasional air drop for players willing to risk separating from the pack for the chance to get their hands on some powerful items. 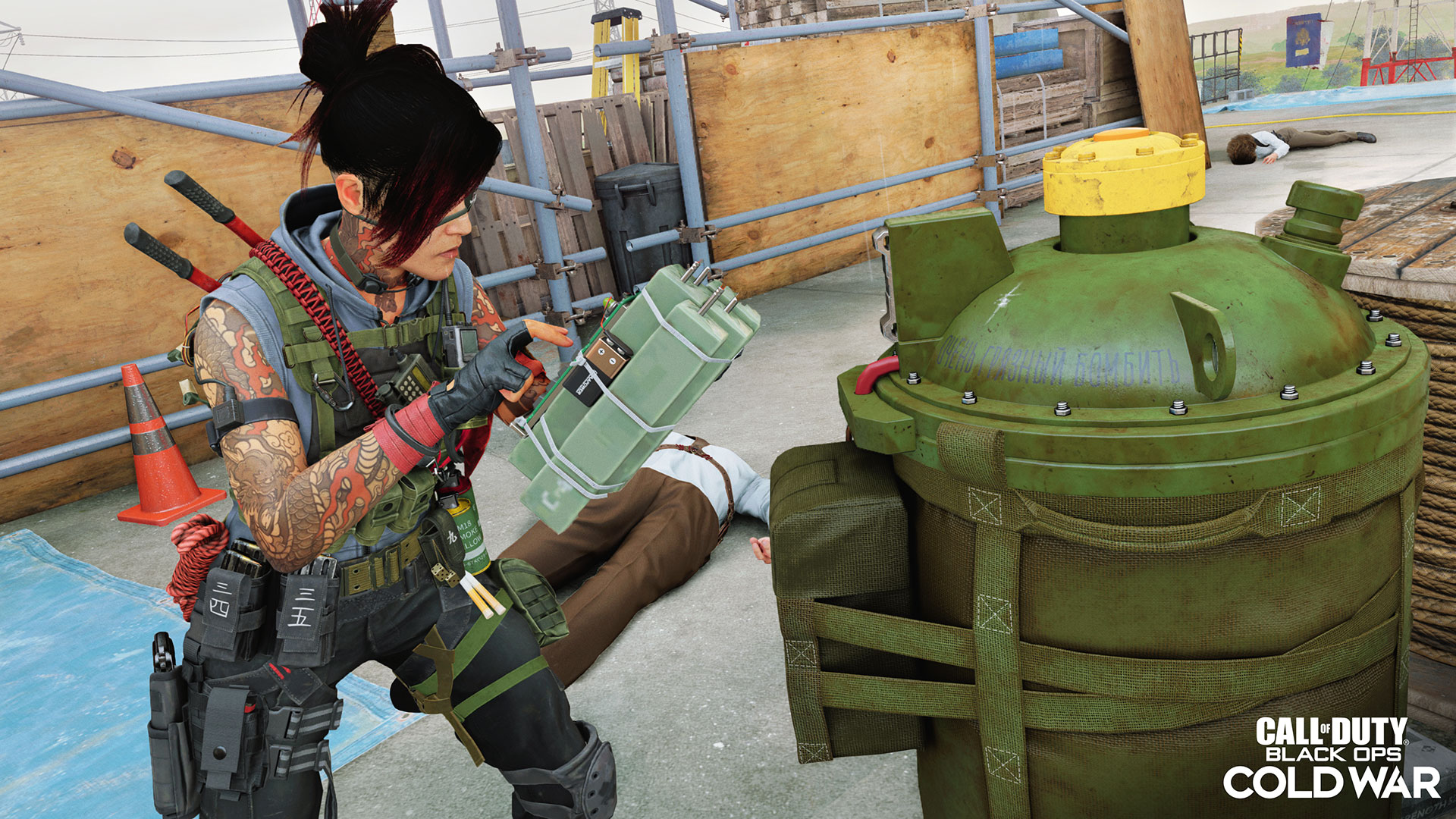 Each round of Double Agent lasts about three minutes at most, and five rounds are played in a standard public Double Agent match.

At the end of the match, each player is assigned an overall score for their individual performance along with a Top 3 showing of the highest earners in the match.

Earn points throughout the match in the following ways:

Need to know how else to win? Here are our expert tips for mastering all three roles:

5. Follow the Clues. Decode the messages provided by the radios around the map to gain info on the Double Agents. Use the process of elimination to track them down. If you’re being tracked as a Double Agent, either remain hidden or try to confuse your opponents by deflecting suspicions via voice chat to other Operatives or even other Double Agents if you’re looking out for yourself more than your fellow spies.

4. Use Your Mic. Whichever role you play, clear communication is absolutely essential. Convey any and all useful information to your team, such as Autopsy Reports, players matching clue descriptions, or any kind of suspicious activity. Double Agents should make regular use of the Double Agent Channel for maximum deception. Although voice chat isn’t required — this can all be done over in-game text chat — it will definitely help your case for winning each round.

3. Wanted Orders: Eliminate on Sight. The Investigator’s Wanted Order Skill helps focus the team’s efforts on singling out a suspected Double Agent. As the Investigator, choose wisely before assigning the order, or risk having your team punished for a wrongful conviction.

2. Separate and Sabotage. Any time the investigating team splits up, the Double Agents have an opportunity to pursue and eliminate them away from prying eyes. Try to lure them away by feigning interest in an air drop or clue, then wipe them out and get ready to fight off the next one. Sneaky Double Agents can even use more deceitful tactics, like defusing a bomb that they planted themselves, to further sow the chaos and confusion that only a true Black Ops spy could devise.

1. Keep Your Wits About You. The best Double Agents do all they can to appear helpful to the investigating team, then slip away or suddenly attack in the least expected moment. All Operatives are suspects. Keep your eyes peeled and never let your guard down.

Now go out and execute the mission.