Operation Monarch in Warzone: A deep dive into surviving the Monsterverse 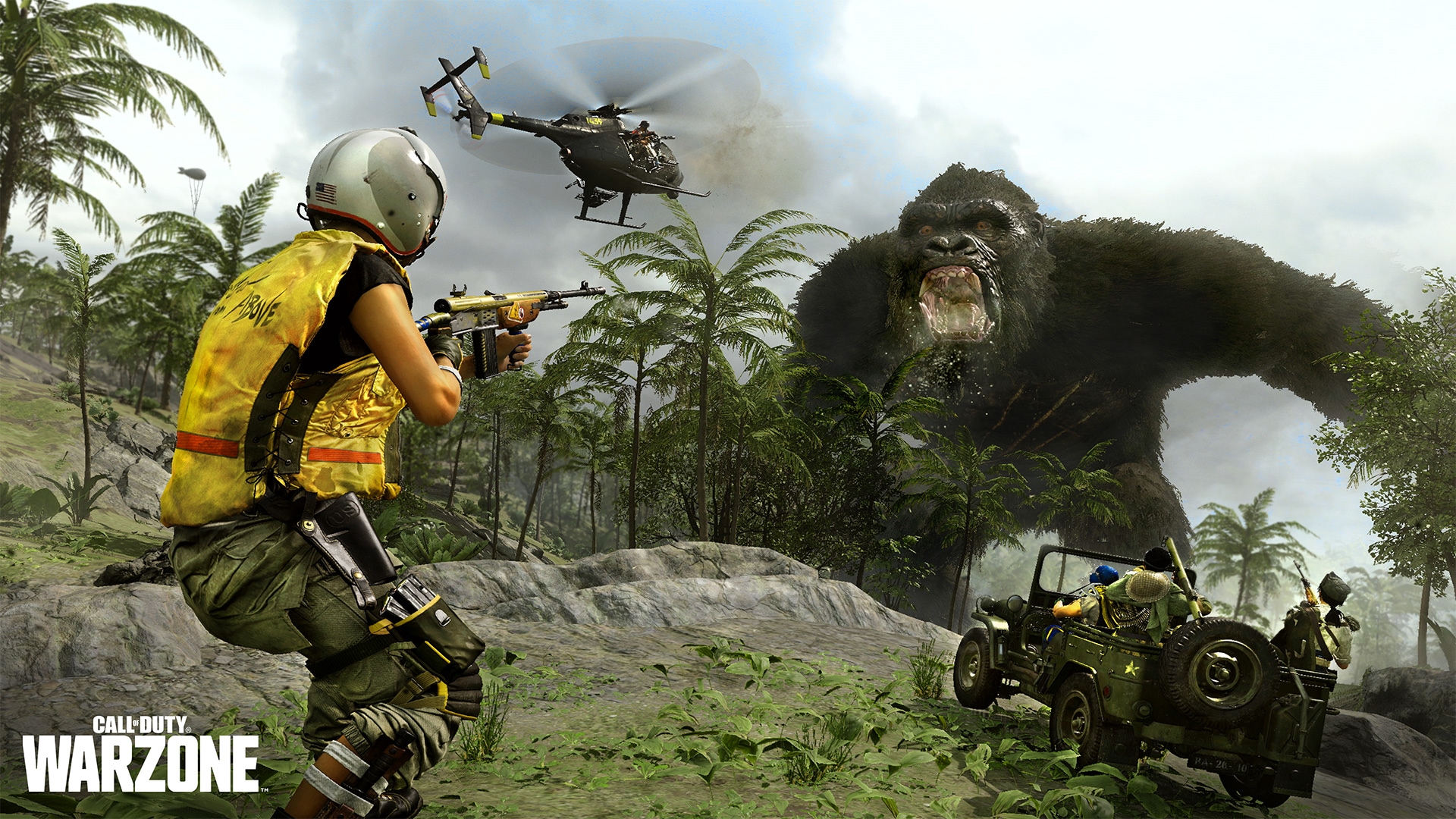 Their Fate. Our Fight. Welcome to Operation Monarch

The Monster of All Battles is here.

From May 11 to May 25, Call of Duty: Warzone Operators can stand toe-to-toe with Kong and Godzilla in the Operation Monarch limited-time mode.

This mode shares a name with the Operation Monarch event, which offers rewards for participating in matches, collecting Monarch Intel, completing challenges, and even buying limited-time Monsterverse Bundles inspired by Godzilla vs. Kong.

Operation Monarch is a true celebration of the Monsterverse and Godzilla vs. Kong within Call of Duty®. Those who already got their hands on Classified Arms in Call of Duty: Warzone and Call of Duty®: Vanguard know how massive the stakes are. Monarch is counting on us to help them quell these monstrous forces — this is the intel you need to save Caldera:

Titans Tale of the Tape — Kong and Godzilla 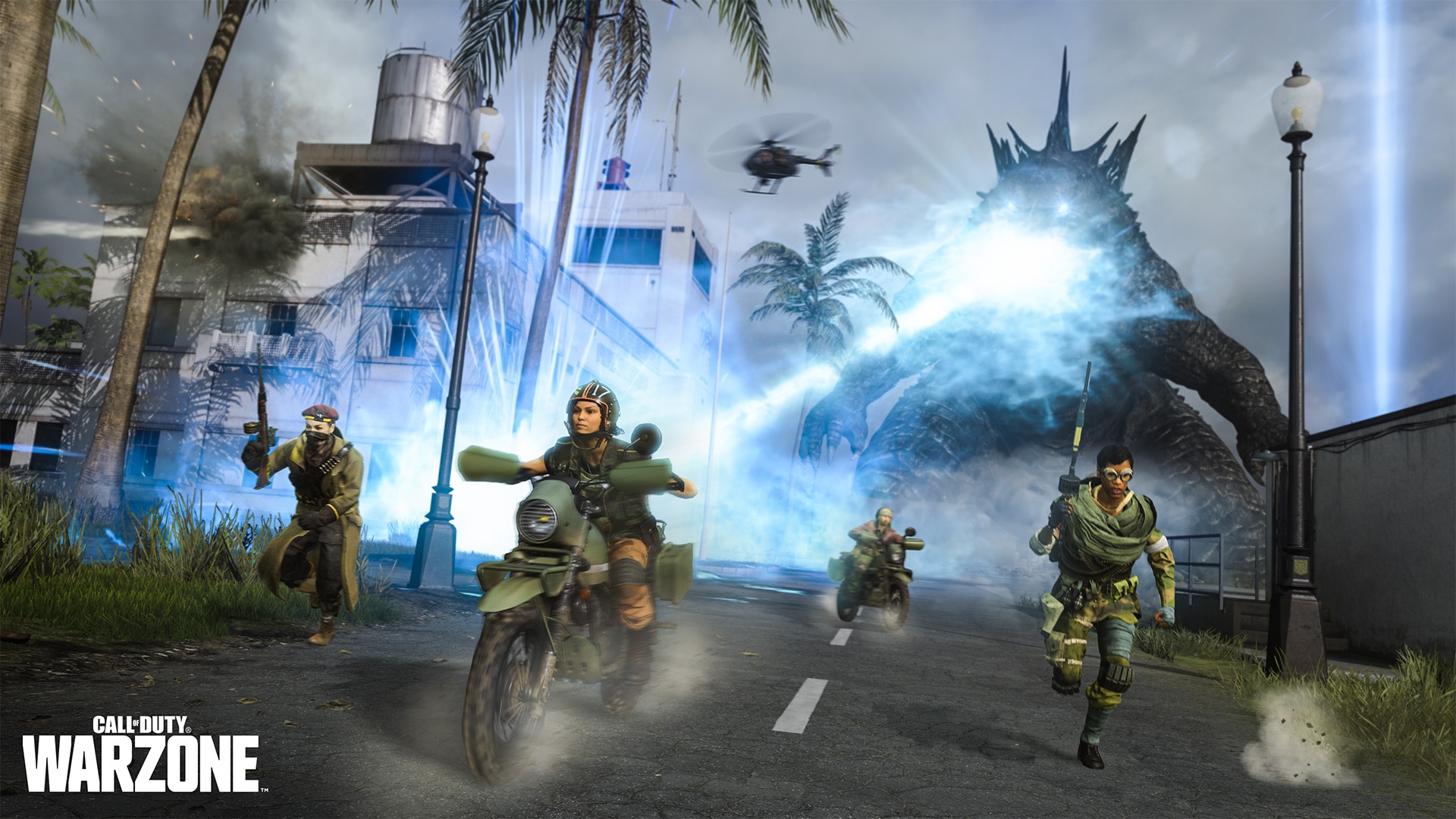 Despite fighting in battles across multiple continents, Call of Duty Operators never faced two colossal threats like Kong and Godzilla before. And despite popular belief, these two creatures are our allies against a greater threat.

“Neither Kong nor Godzilla are villains,” said Sam Rappaport, Legendary’s Director of Interactive Media, who hopes these two monsters can help shore up his scary K/D ratio. “The Monsterverse has ‘Protector’ and ‘Destroyer’ Titans, each with a biological imperative to battle for dominance. While we do see these ancient rivals go toe-to-toe in Godzilla vs. Kong, both are considered ‘Protector’ Titans. However, when provoked by other Titans or humans, there is no stopping their rage.”

In case either of these Titans are enraged in a Frenzy, you will need to know the following: 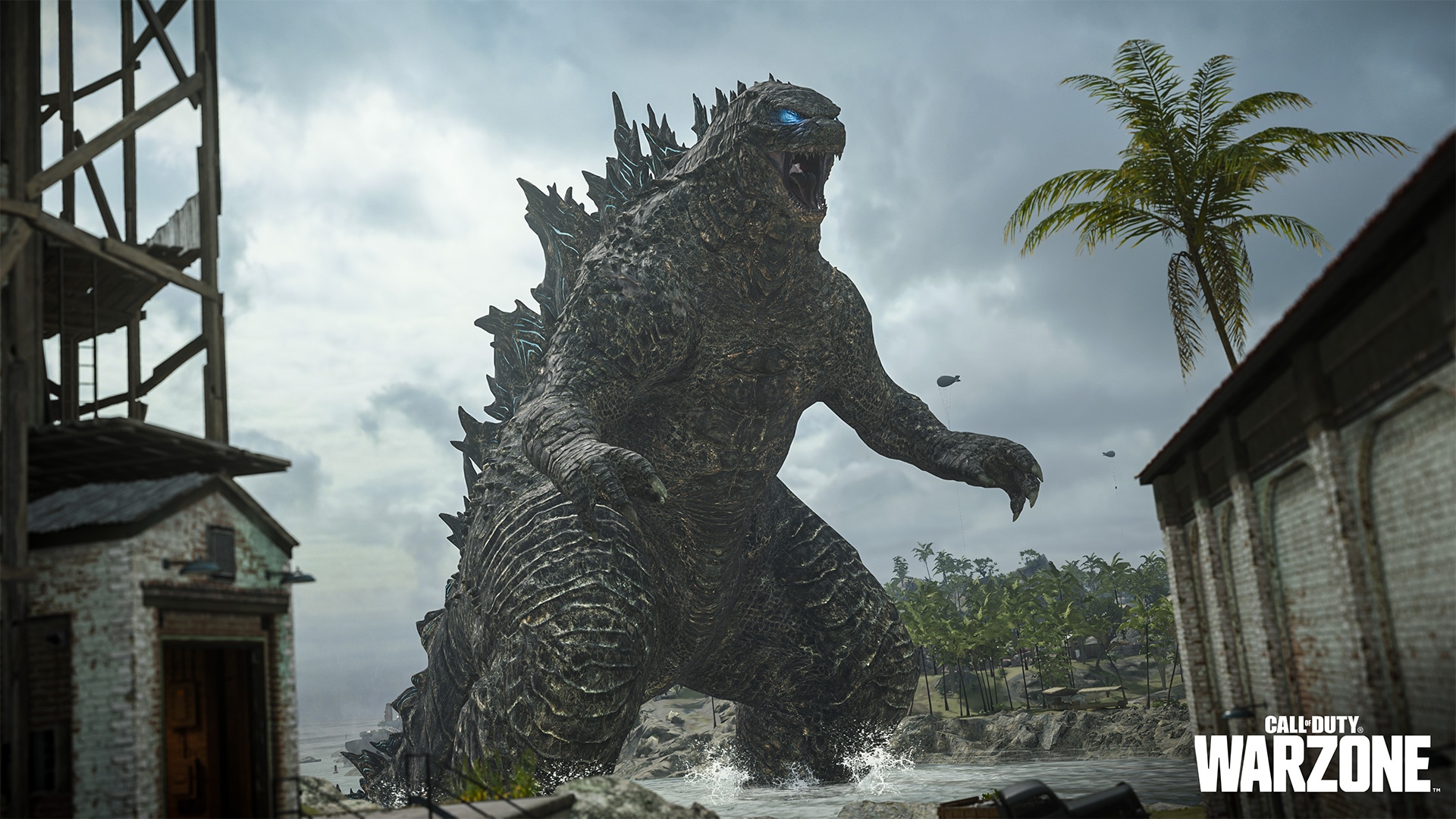 The King of the Monsters has risen from the darkest depths of the ocean to unleash his devastating breath and thunderous roar on unsuspecting shores.

No one — not even the secretive monster defense agency Monarch — knows why Godzilla is so enraged, attacking cities around the world.

His latest target is Caldera, patrolling around the island and using his Heat Ray Breath haphazardly.

This deadly beam of energy appears as several red circles on your minimap after it lights up Godzilla’s scales with an icy-blue glow. Just like a Precision Airstrike, it is best to avoid his line of fire; although he does not purposely target Operators, those who accidentally end up in his destructive path will have mere seconds before getting blasted. 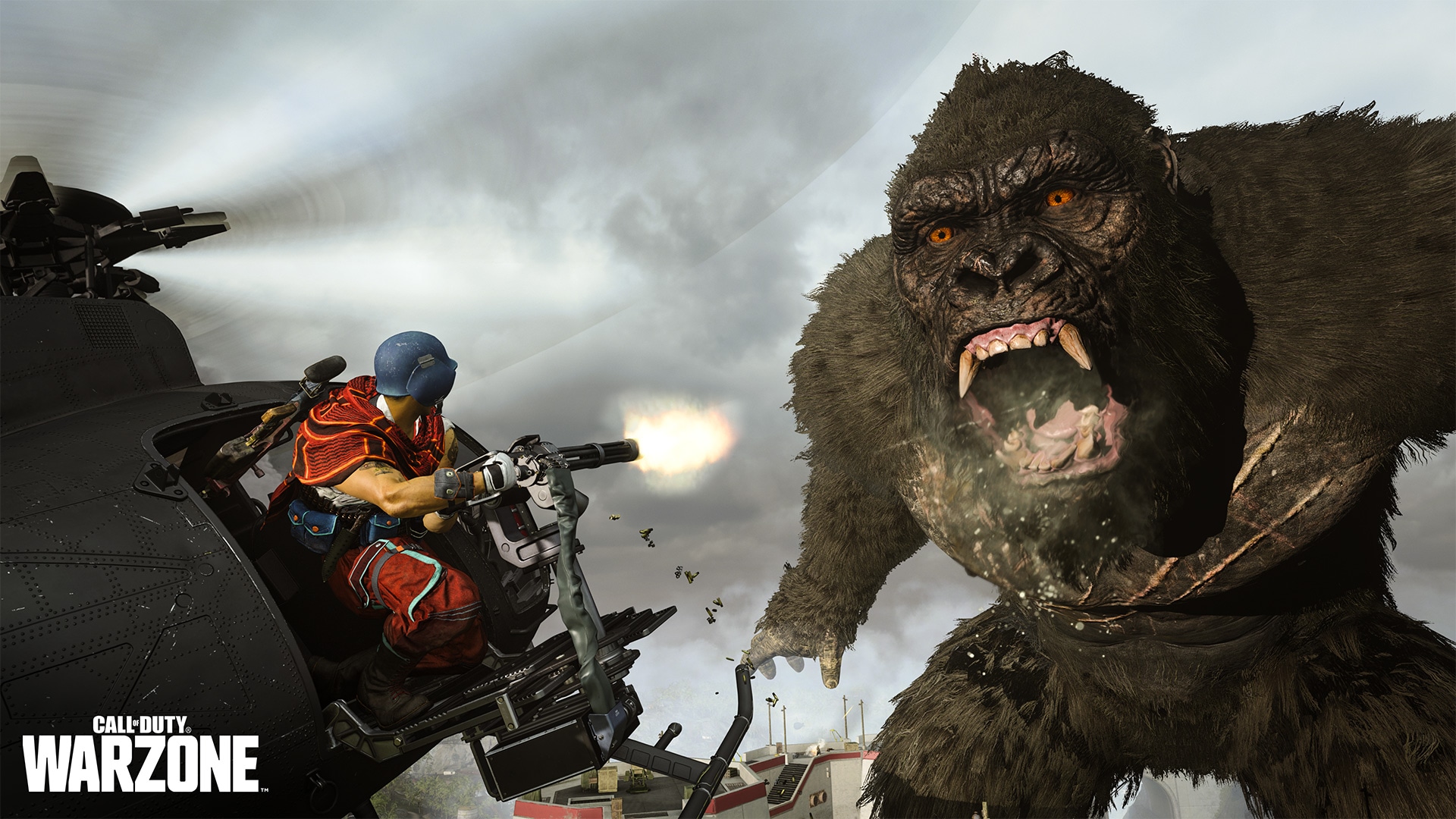 The ruler of Skull Island is now all-powerful, his strength forged in the fire of combat, after decades of defending his territory from nature’s most dangerous creatures.

Although his main domain is Skull Island, Kong is here on Caldera. Is he here to defend this island from Godzilla? Or did Godzilla sense him arriving in Caldera first as the true aggressor?

No matter the explanation as to why he is here alongside Godzilla, Kong will leap and jump around the island. His patterns could be considered predictable, but figuring out where he could land requires further on-the-ground research from Operators.

Kong does not mean to completely crush vehicles and Operators underneath his feet. With that said, merely brushing against Kong can put you in a downed state, so keeping a safe distance from him is a major key to survival.

Remember: Monarch’s organizational mission is “Discovery and Defense in the Time of Monsters.” Our goal is to fight alongside these monsters and live in harmony with them, and through the Operation Monarch mode, Operators can find a way to use their abilities to aid in their own survival. 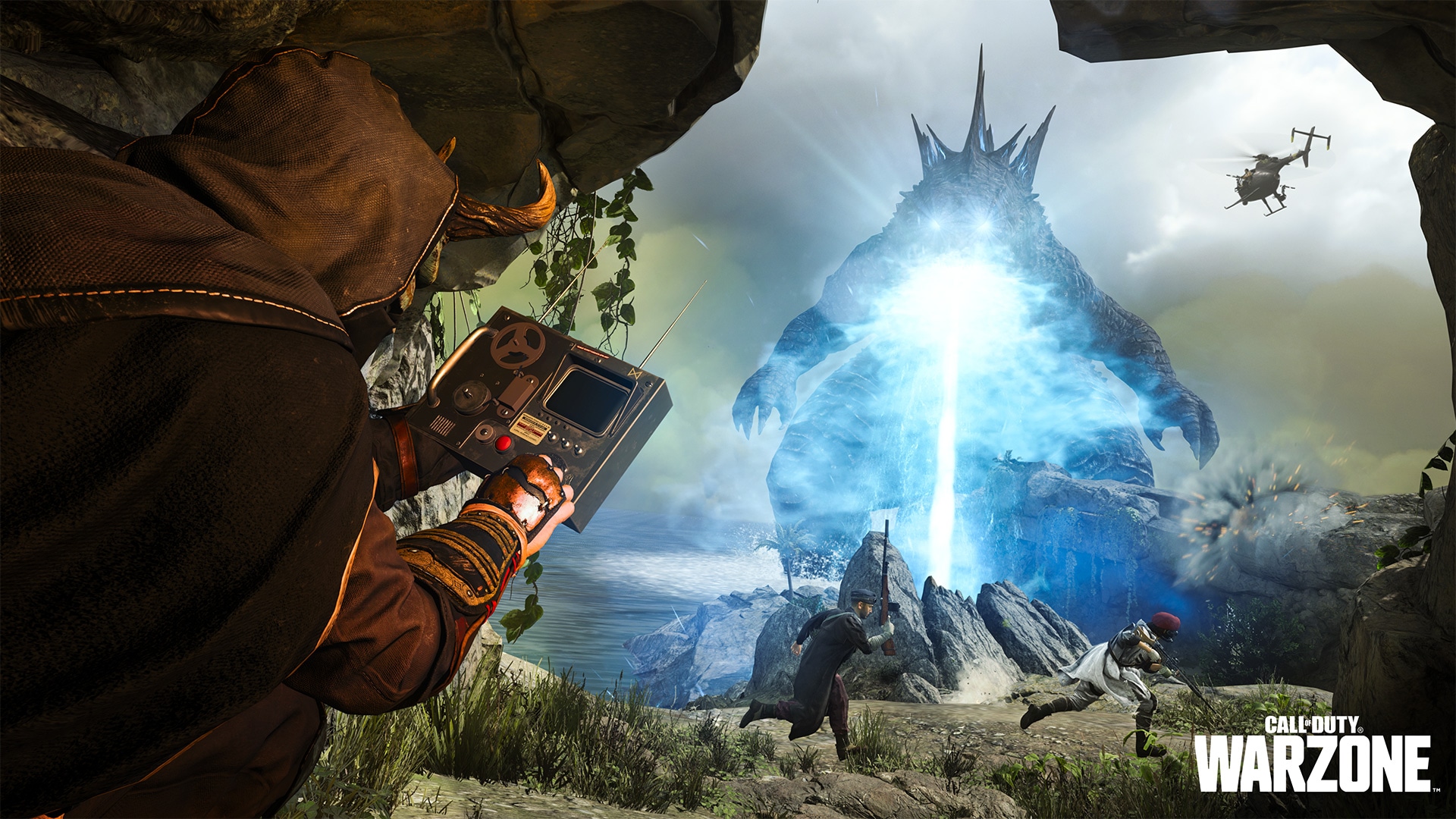 From the initial drop to the final circle, what can Operators expect in the Operation Monarch limited-time mode?

First, they are advised to have a full Quad team; it will be a 60-player match with a Resurgence rule set. A smaller section of Caldera will be marked for the first safe area, and outside of one massive twist, the rules are simple:

Be the last team standing.

On the ground, players will find Monarch Intel via Supply Boxes, special drops, and fallen enemies. Use this to charge a special meter that unlocks items such as Killstreaks and Loadout Drops, along with a unique and powerful Titan Killstreak reward for filling it up completely. Warzone veterans will be familiar with this special meter through the classic Power Grab limited-time mode.

While collecting intel and eliminating enemies, Operators will need to watch out for Kong and Godzilla. Dealing damage to them will award additional Monarch Intel, and while they usually don’t get too aggressive, they will be dangerous during a Titan Frenzy. 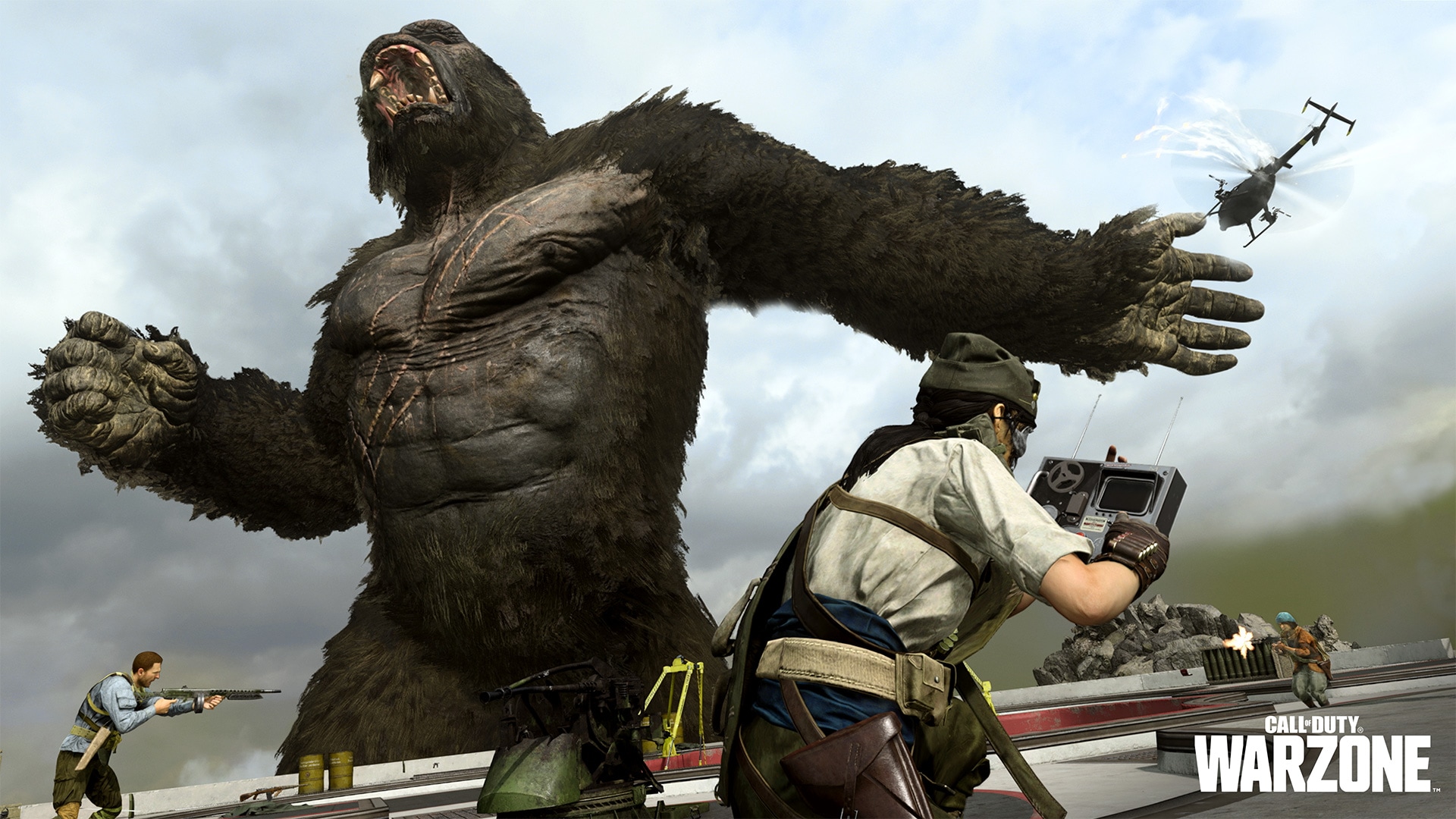 At the beginning of an Operation Monarch match, and at another point during it, Kong and Godzilla may become enraged and recklessly attack.

This is known as a Titan Frenzy. 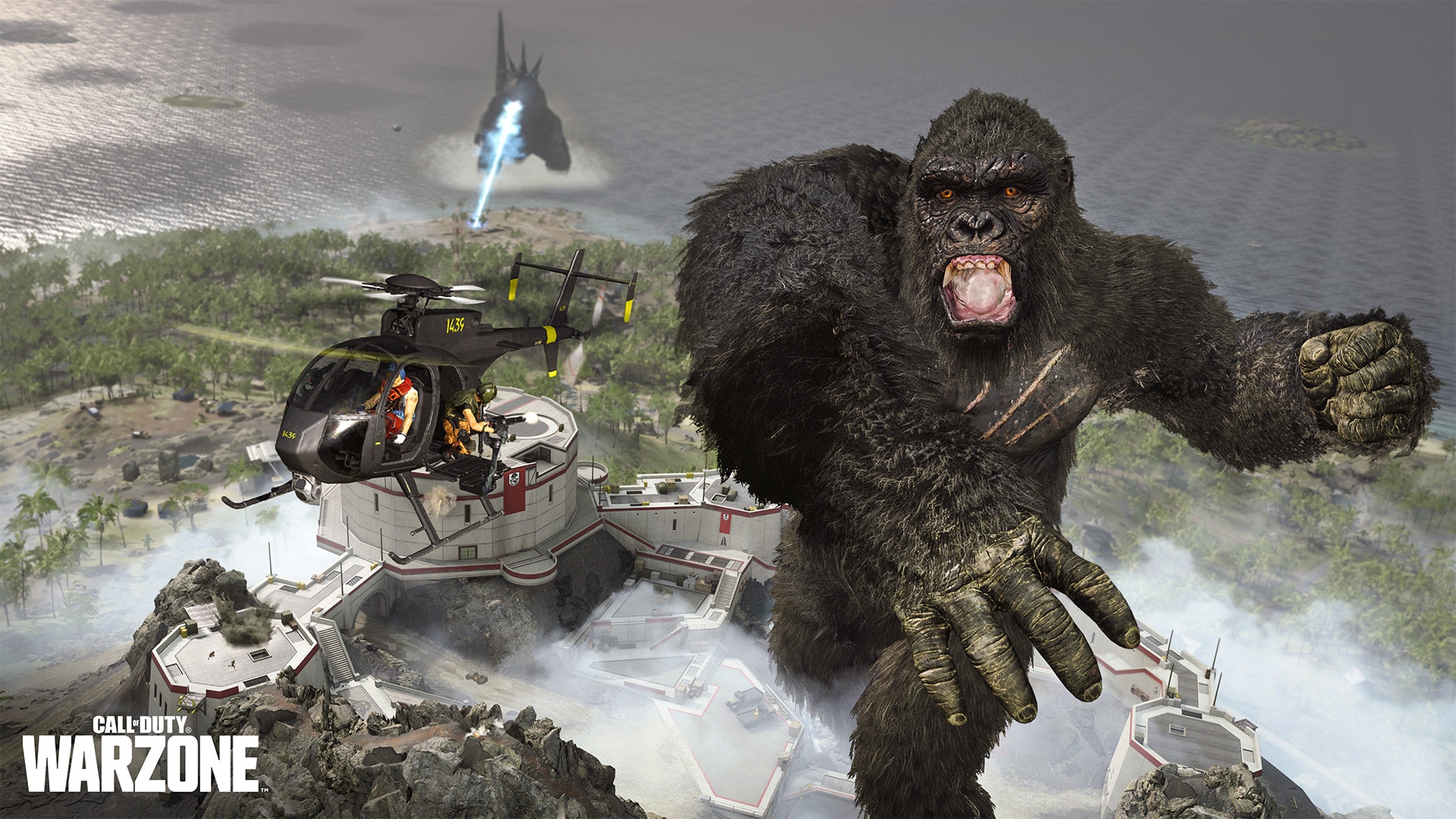 Besides the glory of surviving a battle royale against two Titans, the limited-time mode ties directly to the Operation Monarch limited-time event. 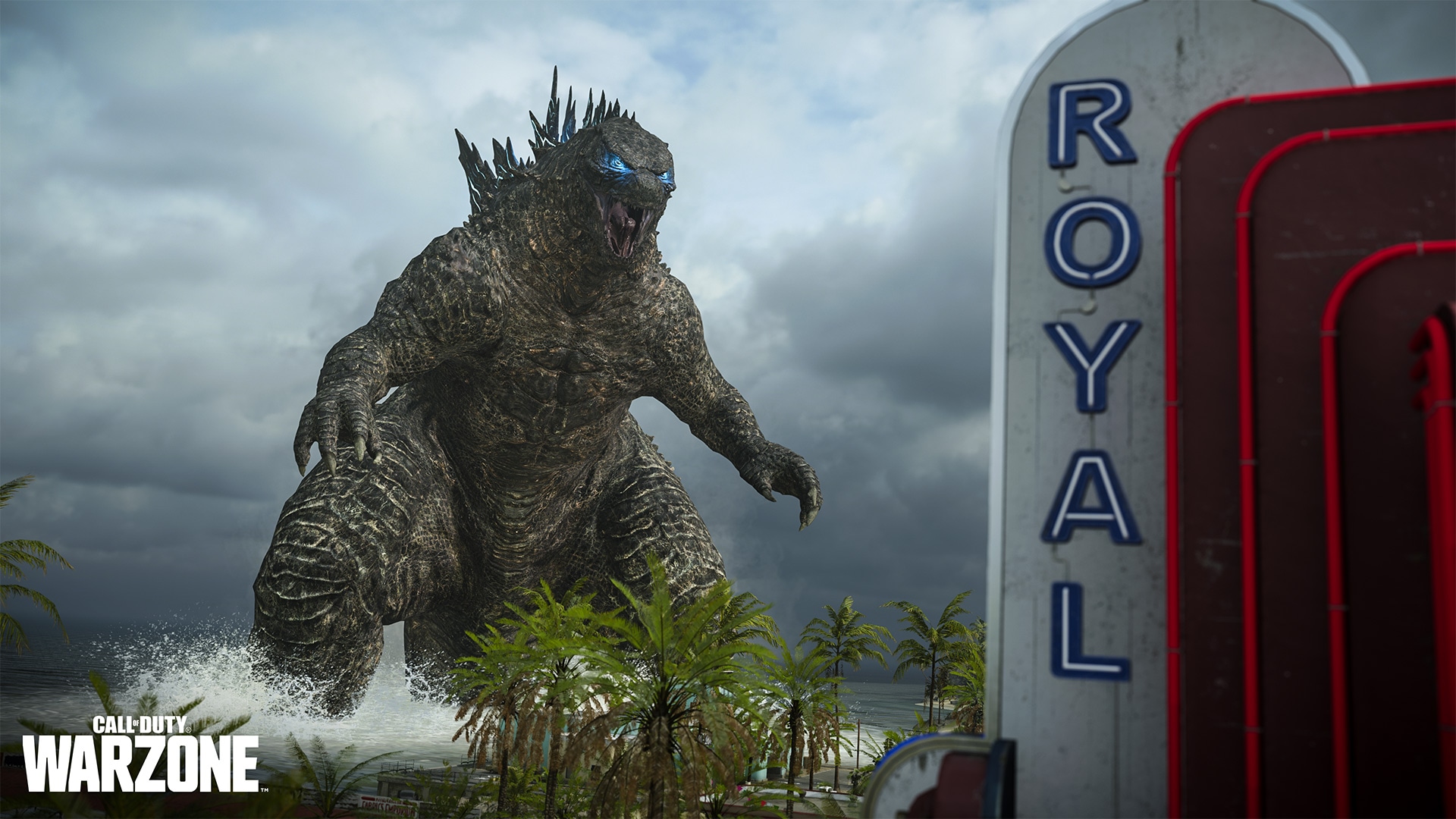 Monarch is also giving out rewards just by playing the Operation Monarch mode and braving the Titan Frenzy in-game event. While these challenges are separate to the eight needed to unlock the “Ancient Rivalry,” there still reward charms, Calling Cards, and Player Titles.

Rumor has it that Monarch has a few secret rewards for the brave (or just plain reckless), so experiment with both monsters and see what you can find…

Operators can use any weapons against the most powerful Titans in the world — yes, even a melee tool, although we don’t advise that.

However, we recommend turning their own power against them. Here are the three Monsterverse Bundles inspired by Godzilla vs. Kong available during Operation Monarch: 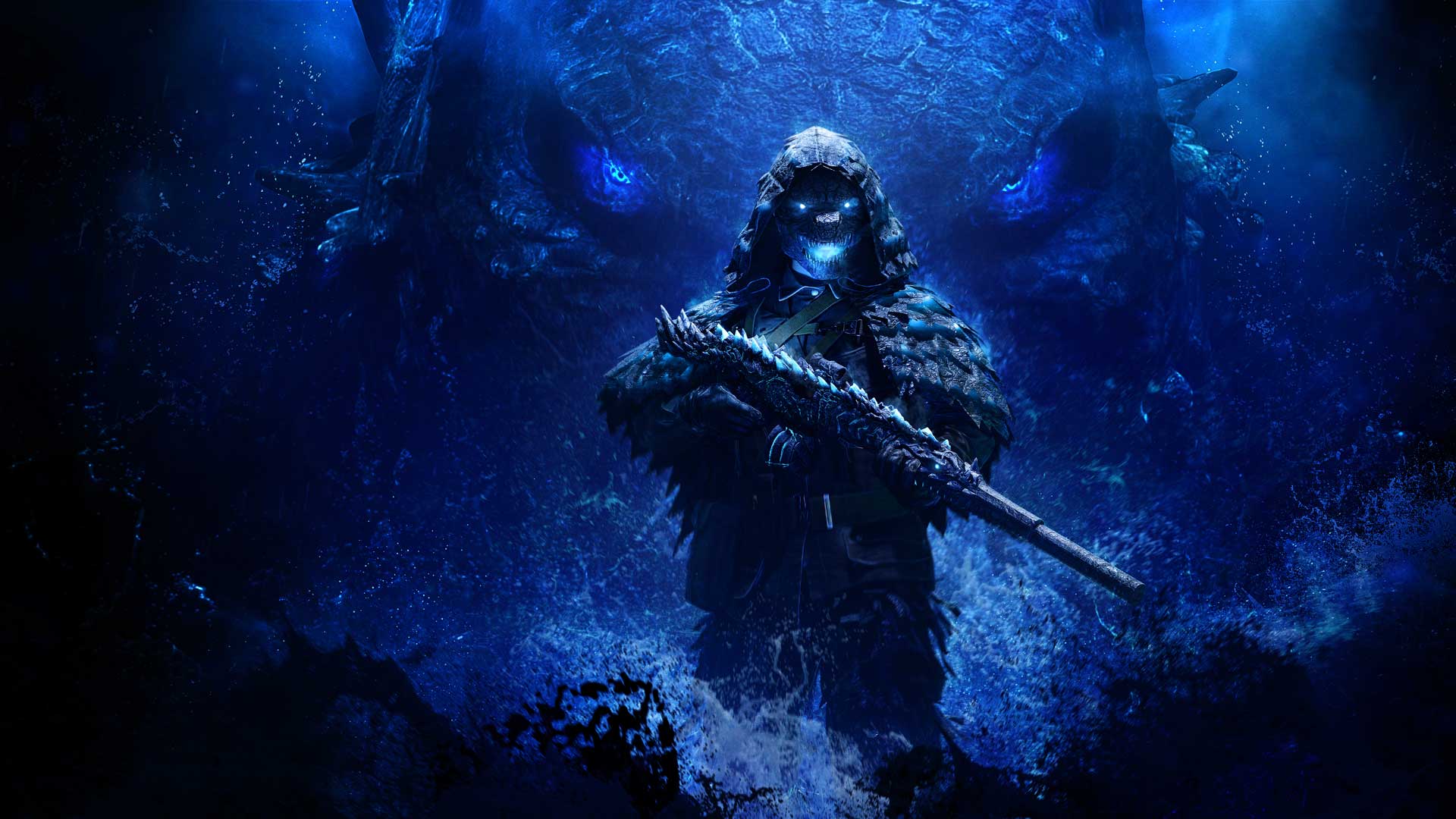 Outside of shooting cool-blue tracer rounds, the “Breath of Godzilla” can be phenomenal against Kong. Its extended magazines and low recoil help deliver consistent damage over time without too much aim adjustment. Against a target that jumps and stomps around, being able to keep a weapon steady with little effort can be crucial to success during a Titan Frenzy.

The other weapon in this Bundle, the Legendary “Awakened Alpha” LMG, is an overall menace against squads and monsters. Use it within a few dozen meters of your target to get reliable damage output. 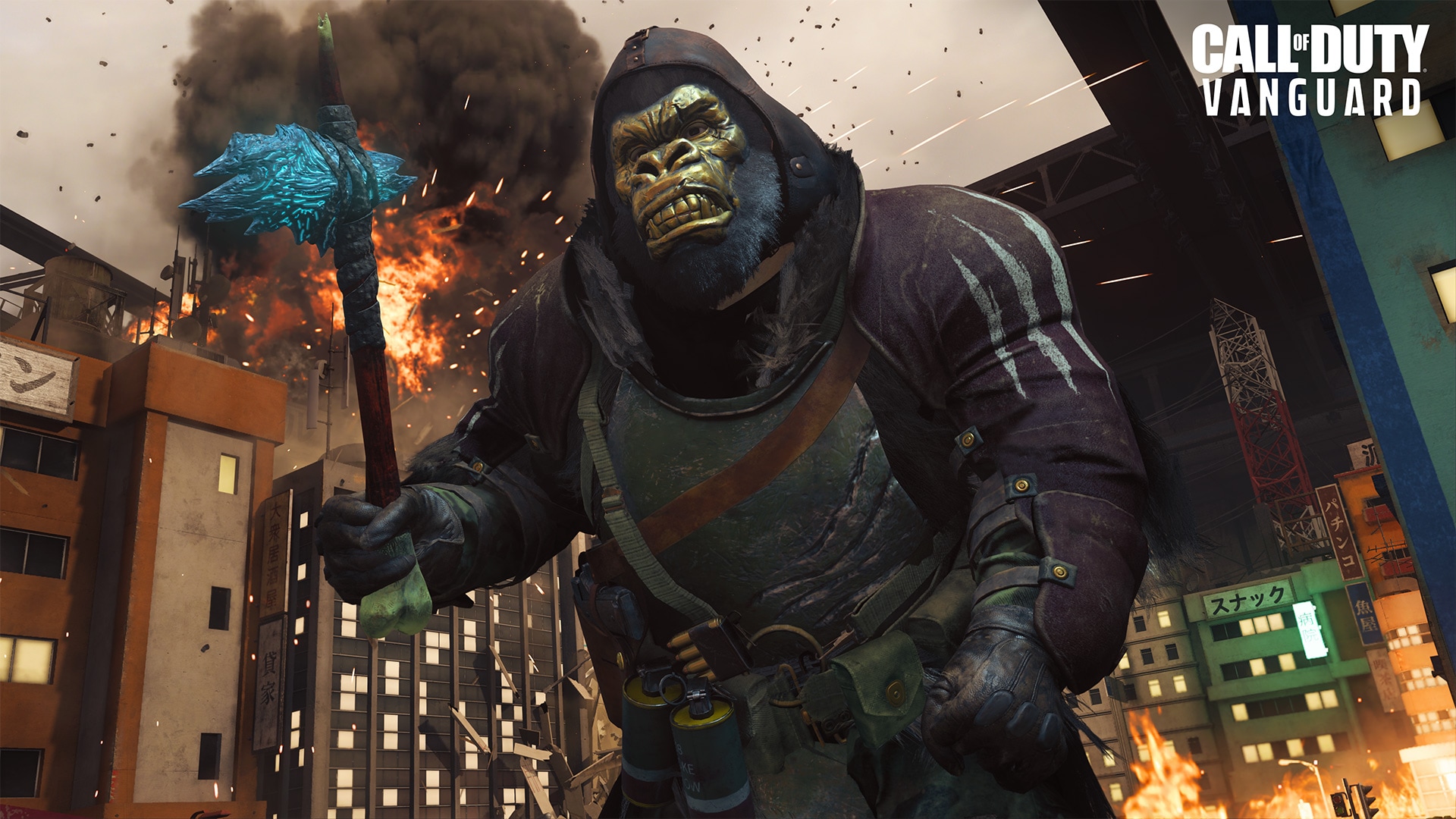 The Tracer Pack: Kong Limited Time Bundle, which includes a Legendary “Kong” Operator Skin for Wade and other items, is where you will find three Legendary Weapon Blueprints: the “Temple of Kong” Sniper Rifle and “Skull Island Shaker” SMG, both of which shoot jungle green tracers, and “Kong’s Scepter.”

While awesome, “Kong’s Scepter” has limited range and is more recommended to be used against Operators. Whereas the “Temple of Kong” and “Skull Island Shaker” are loaded with extended magazines and built to deal consistent damage to either Titan at a reasonable range.

Specifically, the “Temple of Kong” can be a great weapon against Godzilla. Given that he is off the shoreline, this weapon’s extended range helps an Operator output great damage at a distance. And as a Secondary Weapon via the Overkill Perk, the “Skull Island Shaker” helps keep nearby enemy Operators at bay during Titan Frenzy attacks. 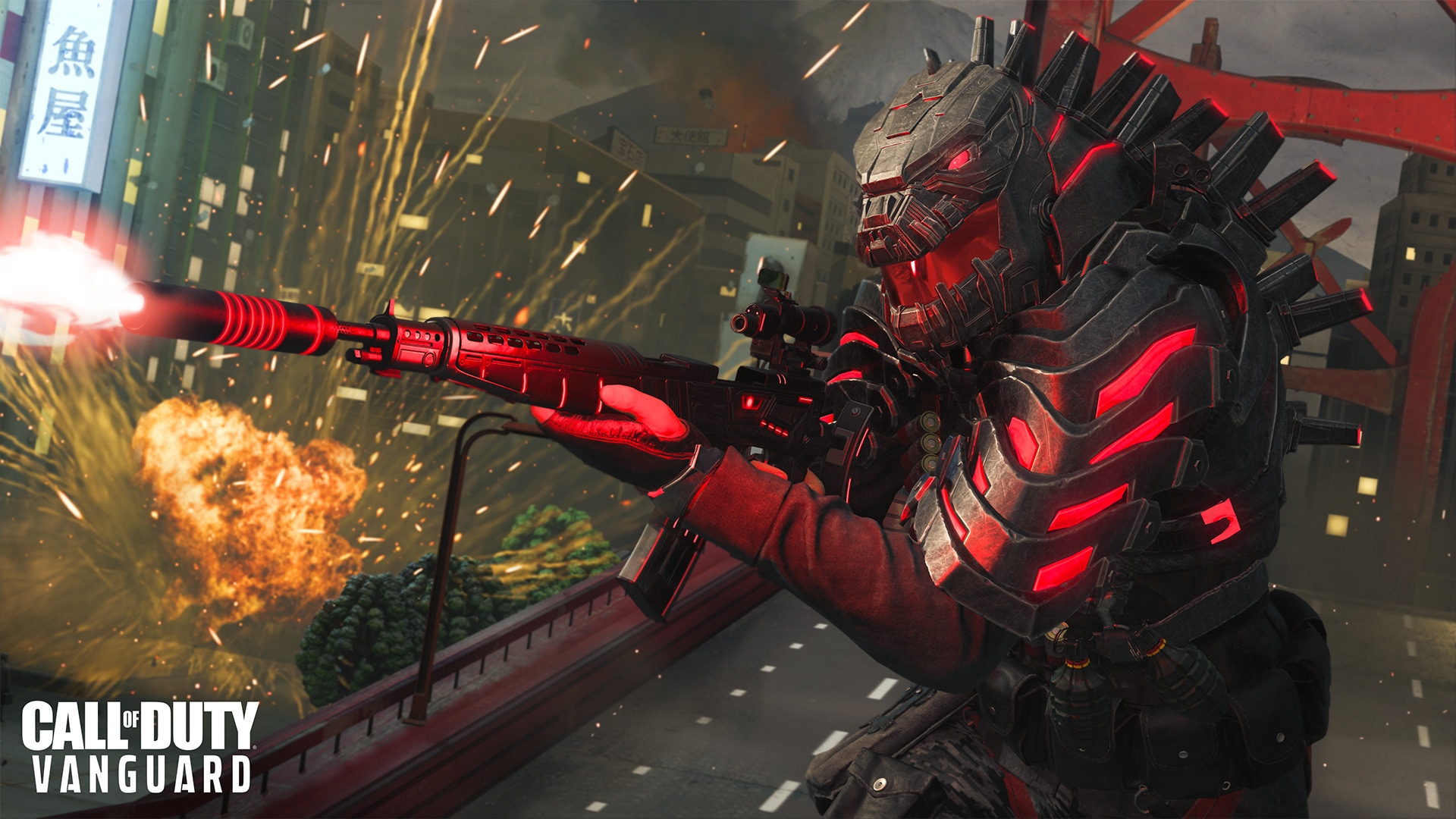 As much as we love Kong and Godzilla, we know the power of the Destroyer Titans and Apex Cybernetics combined can be enough to deal significant damage to the Protector Titans.

Whether you long for King Ghidorah’s return or just want to use the latest and greatest Apex technology for humanity’s sake, the Tracer Pack: Mechagodzilla Limited Time Bundle has two ranged weapons built for taking on Titans.

Both weapons feature rapid-fire attachments, with the “Cybernetic Destroyer” Assault Rifle able to pierce the thick defenses of Kong and Godzilla at midrange. The “Neural Uplink” SMG favors a bit more close-range action, for those unafraid to step up to beasts that stand over 300 feet tall or full squads that are distracted trying to “befriend” monsters.

And remember: getting multiple Operation Monarch Bundles before June 13 gives you additional rewards.

These bonus rewards will be granted as soon as you reboot your game after purchase. 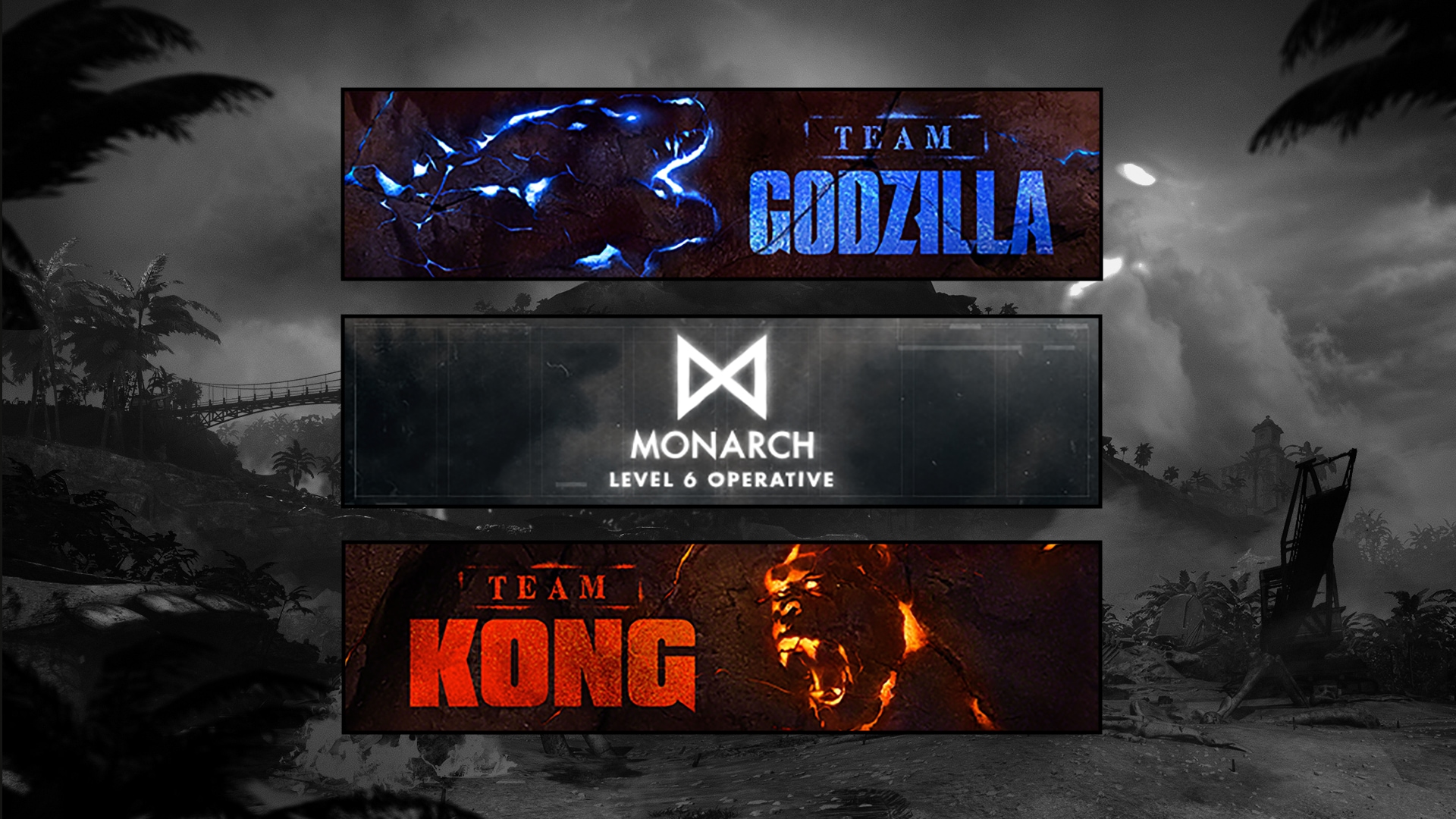 Operation Monarch was made possible by the combined effort of the Call of Duty staff, including developer studios Raven Software, Sledgehammer Games, and Toys for Bob, along with Legendary Entertainment. This colossal effort was done out of appreciation for both fans of Warzone and Godzilla vs. Kong.

For fans who want to go even deeper, the team behind Godzilla vs. Kong at Legendary Entertainment partnered with our developments studios to create exclusive calling cards. Unlock them by visiting Monsterverse.com and entering your e-mail, preferably the one that your Activision Account is tied to.

After doing so, look for an e-mail from the Monsterverse team to receive a special code. Then, visit callofduty.com/godzillavskong and log in with your Activision Account, enter your code when prompted, and claim your rewards!

The items will be in your inventory the next time you start up the game. Contact support@activision.com if you experience any issues redeeming your code. 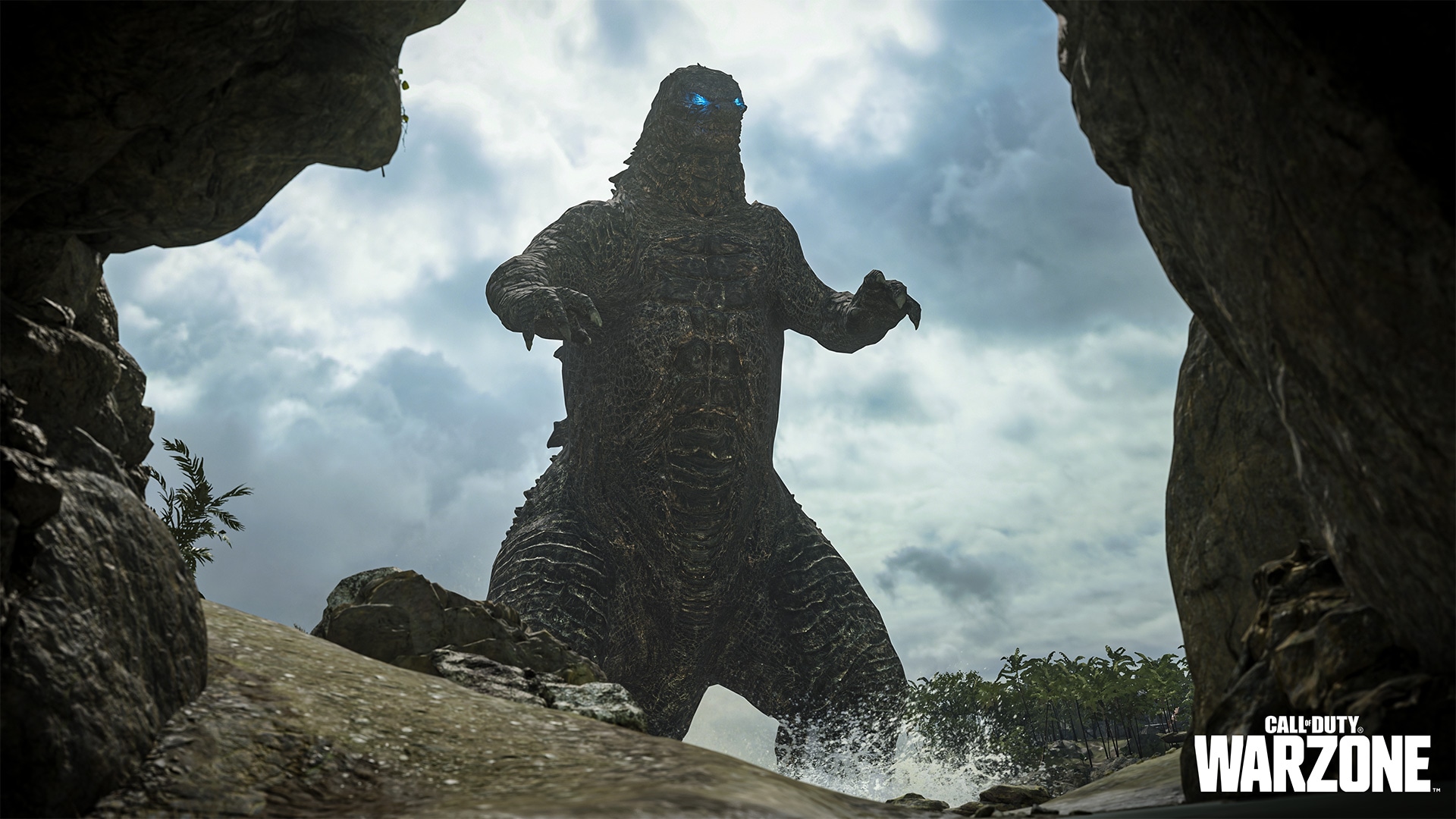 1. Map Around the Monsters. The Tac Map shows current monster positions, while the minimap shows their area of attack. Check these often, especially during Titan Frenzy events.

2. Scavenge for Intel. The Titan Frenzy event isn’t the only way to earn a S.C.R.E.A.M. Device. Watch out for Intel supply drops, and be sure to open Supply Boxes and scavenge enemy bodies for additional intel, which can add up to Killstreaks, Loadout Drops, and the S.C.R.E.A.M. device.

3. Remember: Resurgence Rules. Being eliminated during Operation Monarch does not necessarily mean death. If your squadmates are down due to enemies or monsters, stay alive until they redeploy.

4. High Capacity, High Damage. Kong and Godzilla may never die, but you better believe that they will take tons of damage from a weapon with a large magazine and damage per second. Consider planning your Loadout for max-damage capacity if your squad is aiming to win a Titan Frenzy… Or look around for some conveniently placed heavy weaponry.

5. Strike, then S.C.R.E.A.M. Participating in Titan Frenzy events is one of the quickest ways to get a S.C.R.E.A.M. Device. Keep targeting either monster to get rewards, and consider saving them until the final circles for maximum damage.