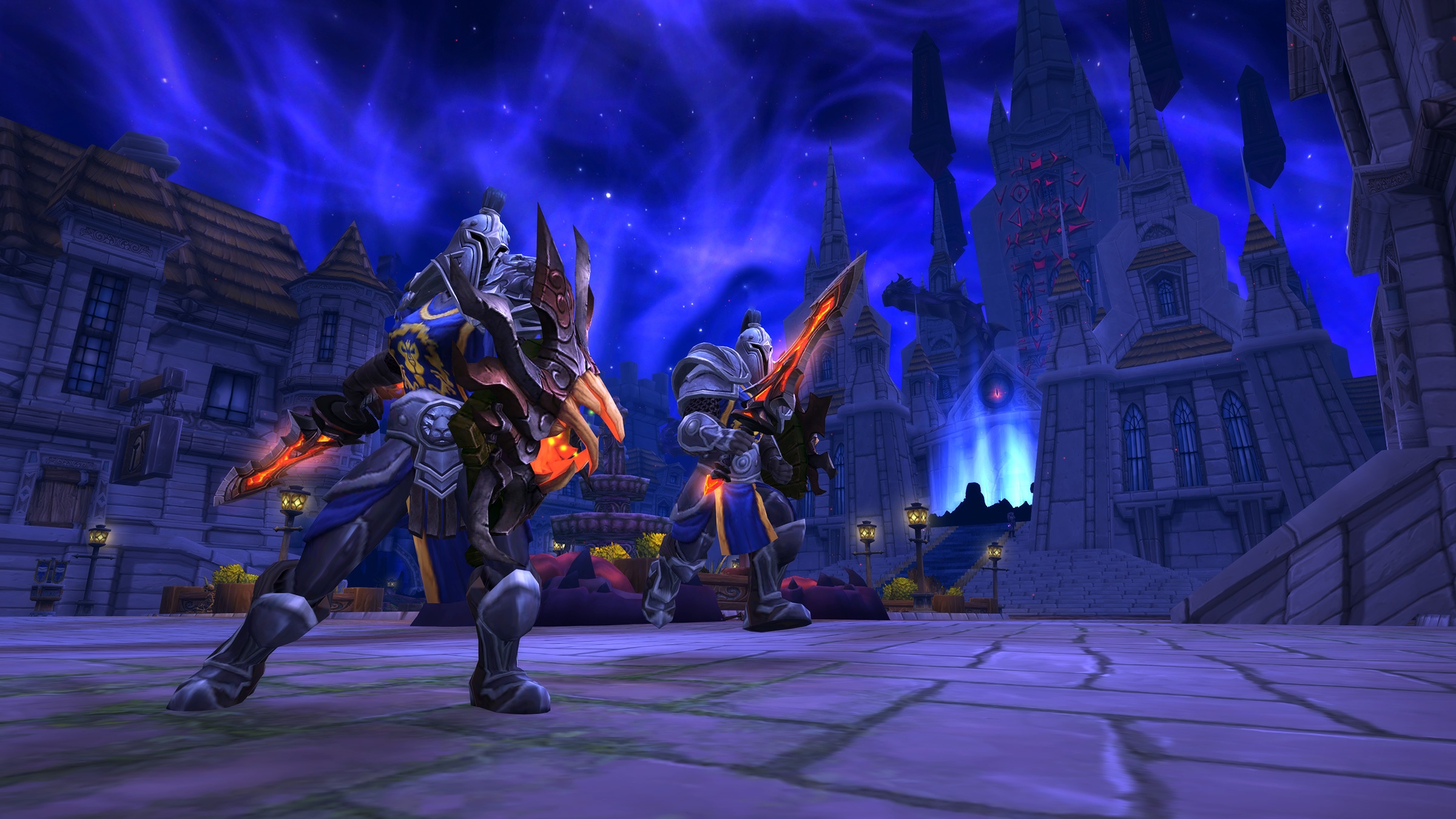 As despair and madness consume the land, the heroes of the Horde and the Alliance will need to fight for their sanity—and the fate of their wounded world. Delve further into the future that the Old God N’Zoth envisions for Azeroth and gird your mind against his maddening Assaults and Horrific Visions.

Getting Started in Assaults and Horrific Visions

N’Zoth has his eyes set on overtaking Azeroth as a part of his twisted vision of the future, but if you’re going to help defeat him, you’re going to need to meet a few requirements to begin cleansing his forces.

If you meet these requirements, you’ll proceed through an introductory questline with Magni to investigate the state of the titan facilities on Azeroth, which will lead to a larger storyline to begin opening the Assaults in Uldum and the Vale of Eternal Blossoms. Once both Assaults are open, you will be introduced to Horrific Visions, ultimately leading to collecting your legendary cloak Ashjra’kamas, Shroud of Resolve, which will aid you in resisting N’Zoth’s corruption as you delve further into each. With Wrathion’s help, you’ll continue to increase your new cloak’s resistance to Corruption over time.

Tip: You’ll need to complete the storyline to unlock each Assault, and Horrific Visions, which will provide new Visions of N’Zoth themed Essences and new Corrupted gear.

As a part of the questline players undergo with Magni, a new ability called Titanic Purification to cleanse Corrupted items can be performed by MOTHER—but at a cost to the benefits that come along with the corruption. You’ll need to collect Corrupted Mementos from within Horrific Visions of N’Zoth first to use it, though.

Witness the overwhelming might of the Old Gods firsthand in new Assaults on titan facilities in Uldum and the Vale of Eternal Blossoms. Players must drive back N’Zoth’s minions by completing objectives in the area, including defeating enemies and rare foes, looting treasures, and participating in events. After making some progress, you will face the lieutenant leading the enemy’s forces.

Assaults will show up on the map (hotkey: M) once they have been unlocked. You can see where the latest Assault is occurring and the available quests in the area by clicking on the N’Zoth’s burning eye next to the Emissary Quests. You can undertake a series of quests for additional rewards in each location as you take part in repelling the Assault.

Assaults in Uldum in Kalimdor:

Amathet Assault (Uldum)
Weaponizing their position as stewards of the titans, the zealous Amathet have taken control of Uldum to help secure their place as the sole controllers of the titanic forge. Sweep this arrogant tribe back into the sandy tombs from which they emerged.

The Aqir plagues Uldum and threatens to obliterate the region’s titan facilities in the name of N’Zoth and the Black Empire. Crush their uprising to put an end to their mindless destruction.

As the veil between worlds fades, N’Zoth’s servants will infiltrate Uldum. Purify the desert sands of his ancient corruption.

Tip: Keep your eye on the skies above Uldum and Vale of Eternal Blossoms and stay low— otherwise, the Great Worms From Beyond could make your quest more challenging with their Foul Stench. They’re a dangerous predator in the skies, and even getting close could impact the speed that you fly.

Assaults in the Vale of Eternal Blossoms in Pandaria:

Mantid Assault (Vale of Eternal Blossoms)
The peaceful lands of Pandaria are under siege from the mantid swarm once again. Squash Shek’zara’s insectoid servants to foil the hivemind’s plans.

The warring clans of the Mogu over the Vale are surging to a breaking point, leaving devastation in their wake. Beat back their forces to put all sides this proud race on their knees.

Completing an Assault rewards a Vessel of Horrific Visions and a Corrupted item. While taking part in Assaults, you’ll also be able to earn two new reputations: Uldum Accord and Rajanni. Each faction will provide new rewards that can be purchased.

Players will also be able to enter Lessor Visions of N’Zoth while Assaults are active. These can be entered solo or with a group and provide a window into the future that will put your sanity and skills to the test as you progress through it. Make sure to watch your sanity bar and work with your team.

Horrific Visions: Look Not Into The Darkness

Once you’ve obtained your legendary cloak, you’ll work with Wrathion to open a gate to his Horrific Visions.

Each time you’re subjected to a Horrific Vision, you’ll leave with more knowledge and fragments of N’Zoth’s corruption. Take these to Wrathion and MOTHER in the Chamber of Heart to strengthen your defenses and earn new tools, which will allow you to delve deeper into N’Zoth’s Horrific Visions and reap greater rewards.

Titanic Research Archive
Turning in Corrupted Mementos will reward you with abilities that you’ll be able to use to help your party delve deeper into future Horrific Visions, overcome greater threats, and weather the effects of N’Zoth’s sanity-draining attacks. You’ll be able to choose from a variety of passive abilities ranging from revealing treasures to mitigating the amount of sanity drained while in the instance. Bring these fragments to Wrathion and MOTHER in the Chamber of Heart located in Silithus.

Gather your allies to stand steadfast against the ancient corruption spreading across Azeroth.