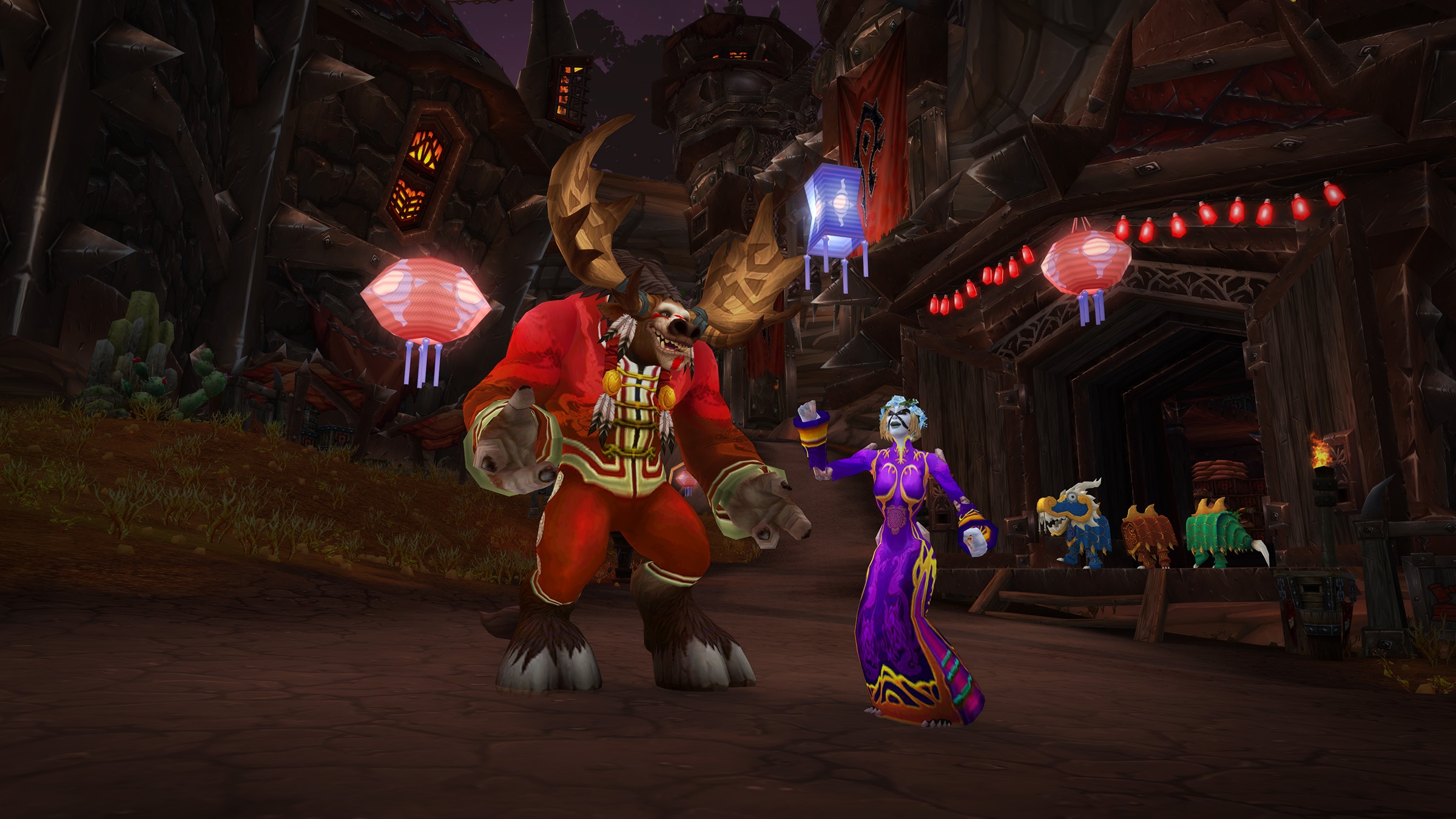 When: February 5–19
Where: Moonglade, with camps in Ironforge, Stormwind, Darnassus, Thunder Bluff, Orgrimmar, and the Undercity*
Currency: Coin of Ancestry

The Lunar Festival is a time of celebration for the peoples of Azeroth. At the beginning of each year, elders of generations past manifest around the world to impart their wisdom upon all who listen. Should you encounter these venerable spirits in your travels and take the time to heed their words, they may even pass along tokens of their gratitude—Coins of Ancestry, the lessons of a past age in physical form. Gather enough Coins of Ancestry and the Cenarion Circle will open their stores of celebratory garb, fireworks, trinkets, and recipes!

The Cenarion Circle has good cause to celebrate, for the Lunar Festival marks the return of many Ancients that fell in battles past: Goldrinn, Malorne, Aviana, and Cenarius himself. But this celebration is darkened by the eternal torment of one of their own—Omen, a wolf Ancient blessed by the moon goddess Elune, has risen from the depths of Moonglade’s lake. Though Omen was once as noble and proud as any Ancient, he was driven mad by the Burning Legion’s tainted magics during the War of the Ancients. Omen’s immortality means that he is forever cursed to return in his maddened state at the advent of each new year—and this year, he has grown further in power.  Heroes level 20 and above must make haste to ease this tormented Ancient’s suffering, in the hopes that perhaps next year he will return with a clearer mind.

Once you’ve proven your pyrotechnic prowess, you’ll receive your Lunar Festival Invitation to travel to Moonglade and speak with Valadar Starsong in Nighthaven. With your invitation in hand, you’ll be able to travel quickly to Moonglade by standing within Greater Moonlight throughout the holiday.

The Lunar Festival features has 16 achievements and one meta-achievement.

It's a good time to travel Azeroth, see the sights, and pay your respects to the various Elders. Visiting an Elder will reward reputation with select capital cities, a Coin of Ancestry, some experience and gold, and a Lucky Red Envelope.

*Speak with Myrael Lunarbloom in Moonglade to take the quest Lunar Preservation. You'll be tasked with visiting various moonwells around Azeroth to charge her staff. Upon completion of the quest, you'll earn 25 Coins of Ancestry which you can use to purchase one of four floral crowns (only wearable during Lunar Festival) from Valadar Starsong. Once you've purchased a crown, a new quest will become available allowing you to earn a new version of the crown. This new crown is then added to your transmog appearances once the quest is complete allowing you to wear this crown year-round. Once all of the crowns are purchased, the associated quests become available to all characters on your account.

Learn more about the Lunar Festival on Wowhead's holiday guide.

*Players who wish to travel to old Undercity will need to speak with Zidormi in Tirisfal Glades east of Lordaeron Keep, just outside of the burned scar near the road.