Cyber Demon Genji is the first of its kind: our debut Mythic-tier skin. Mythic skins soar a tier above Legendary, pushing the artwork, animation, and special effects to levels we hadn’t incorporated in our skins to this point!

We chose Genji for the first Mythic skin for several reasons, but it ultimately felt very natural to build this skin for one of the most beloved heroes in the game. I mean, who doesn’t love the little brother dragon who was rescued from the edge of death to become a lethal, cyborg-ninja who ultimately found his purpose in peace and harmony?

Genji is a complex hero, both in story and playstyle, and building a Mythic skin for him was a new process with many additional layers. To give you an insight into this new process, we’re joined by parts of the team that made this skin a reality:

Let’s start at the beginning: square one of creating any skin for Overwatch 2, including Cyber Demon Genji! 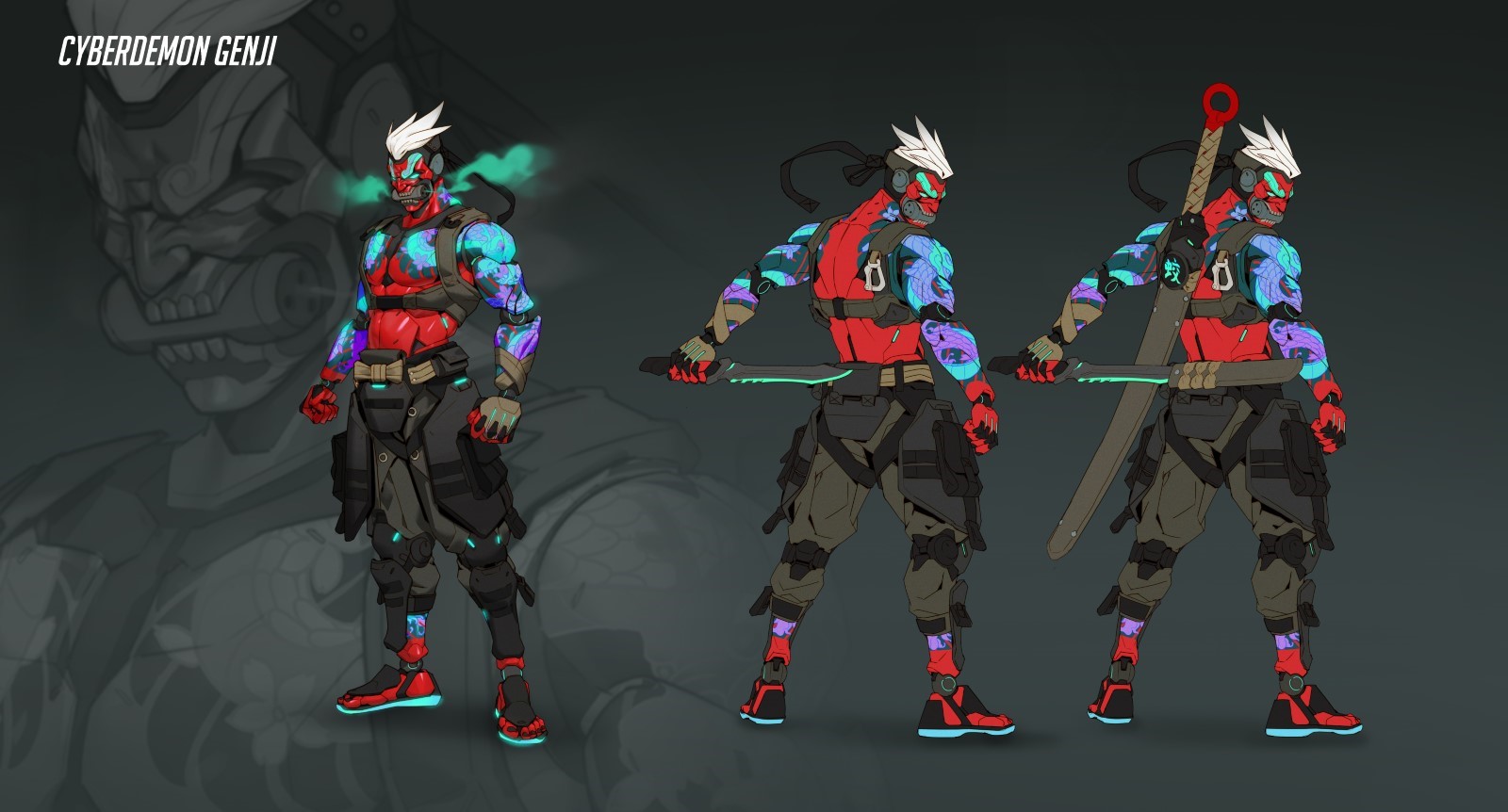 Concept art is where creative ideas materialize on paper, and for Cyber Demon, it served as a launching pad for every part of development that followed. There's no shortage of creativity on this team, so we started by sketching out the scope for this project. 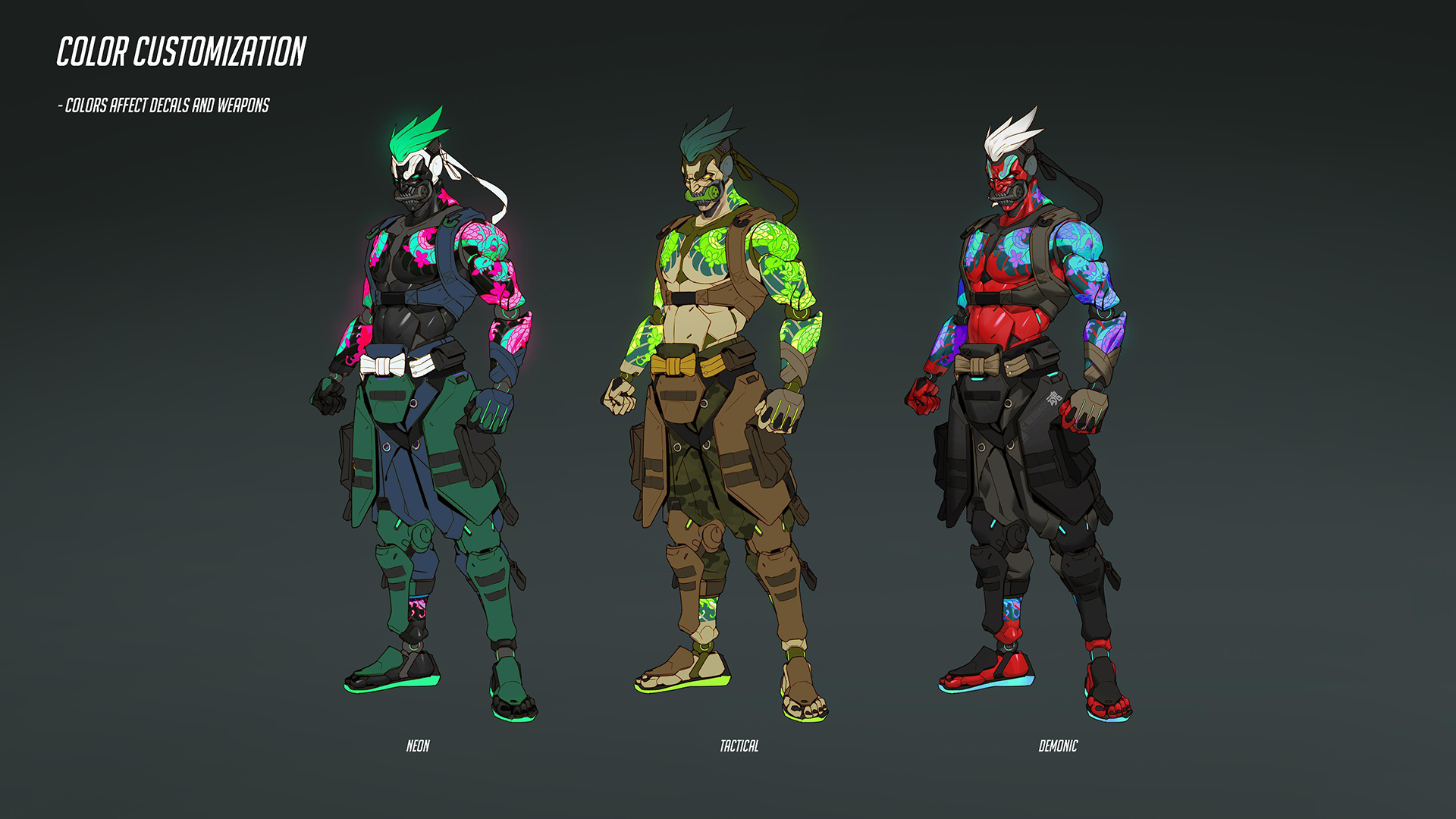 We tried out many different concepts on different heroes to draft a process for creating a Mythic skin. “The initial concept art started out similarly to a Legendary skin, with a unique theme,” says Fang, “From there, we pitched ideas for things like variations, customizations, and possible effects.” 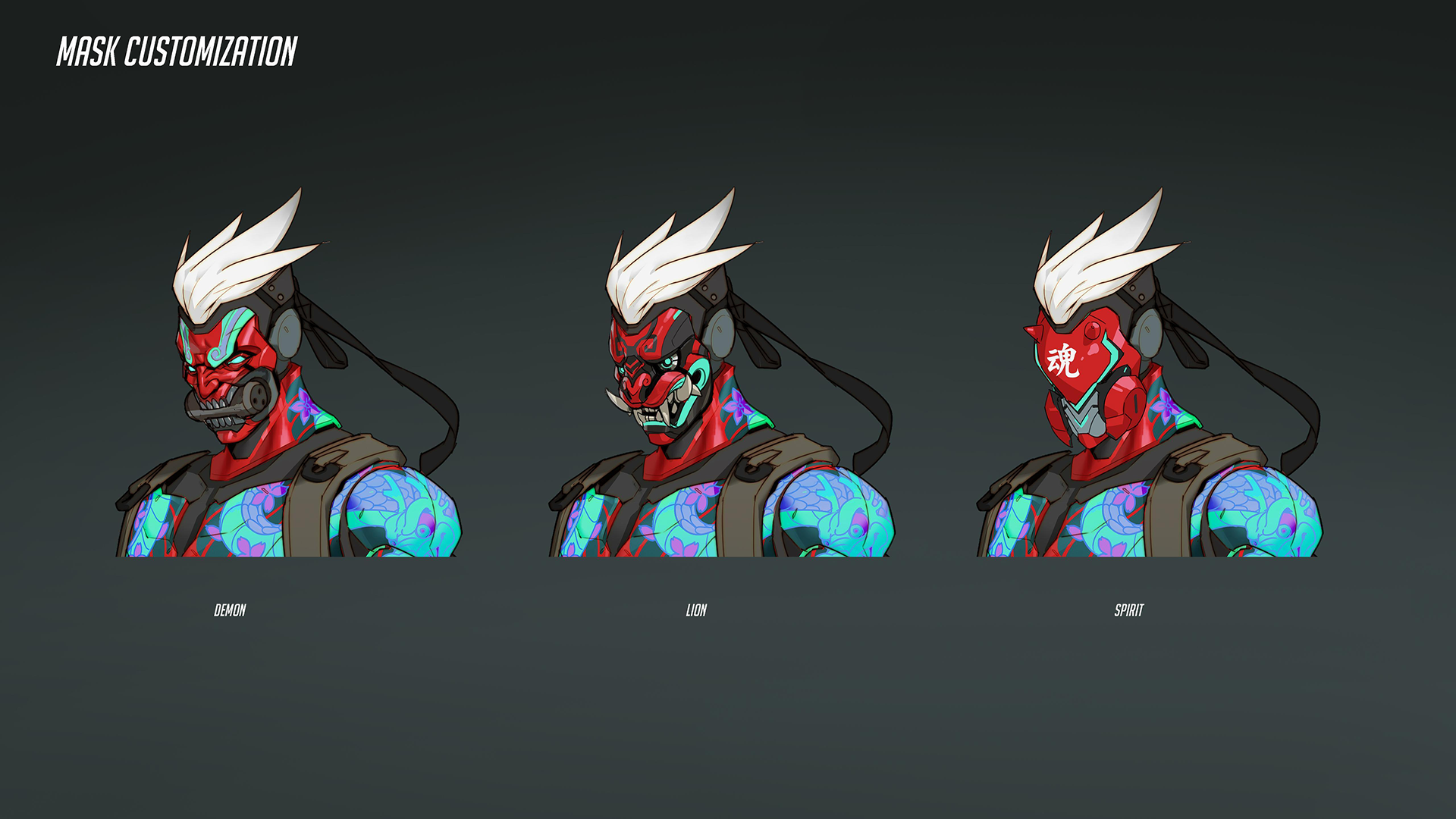 “Our direction for the skin revolved around the cyberpunk theme for Season One,” explains Fang.

These unique themes help guide the design, and then we refine the skin around secondary themes that fit with Overwatch. “For Genji, we incorporated Japanese artwork into the design of his armor and tattoos," Fang says, "Staying true to the hero is always important for us, so we used color combinations that fit Genji’s personality and vibe.” 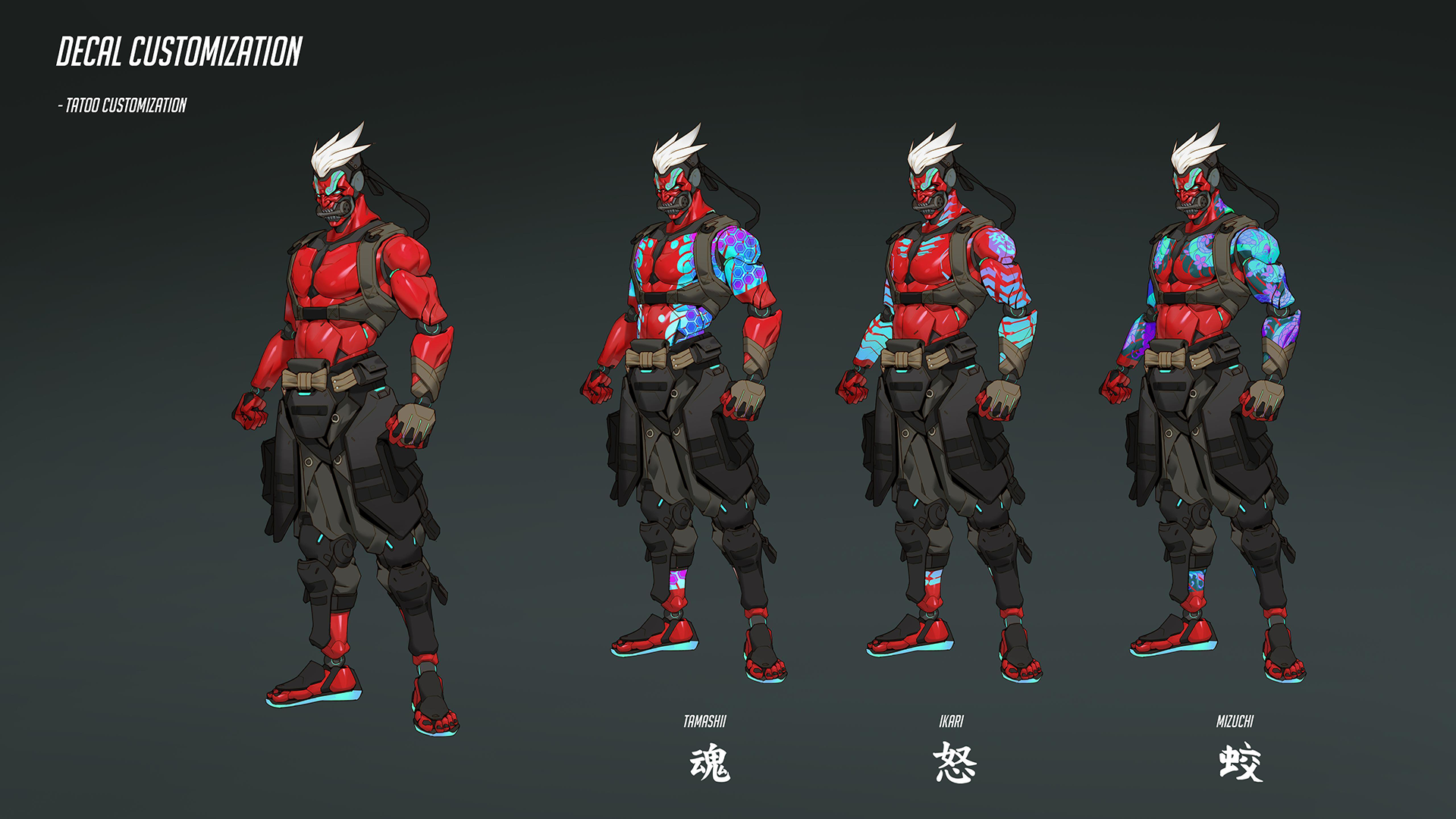 Layered on top of armor and color combinations, Cyber Demon Genji has unique customizations and effects that are also inspired by these themes. All these variations were drafted and finalized by concept art before it was time for modeling and animation to build and optimize Genji’s Mythic in-game.

A cybernetic model for our cyborg ninja

The finished concept was shared with the character art team to create the model and all the colors, patterns, and textures that go on top of the skin. Each hero has a unique model for their bodies, weapons, and equipment, which served as a bit of a challenge when it came to creating a Mythic skin for Genji because he has so many of them.

“All standard Genji skins have five weapon meshes—shurikens, sword, the sword’s sheath, dagger, and the dagger’s sheath,” explains Mianowski. “Cyber Demon comes with two sets of weapons, which doubles the standard amount of weapon meshes for a skin, and each one of these sets comes with three different color variations.” 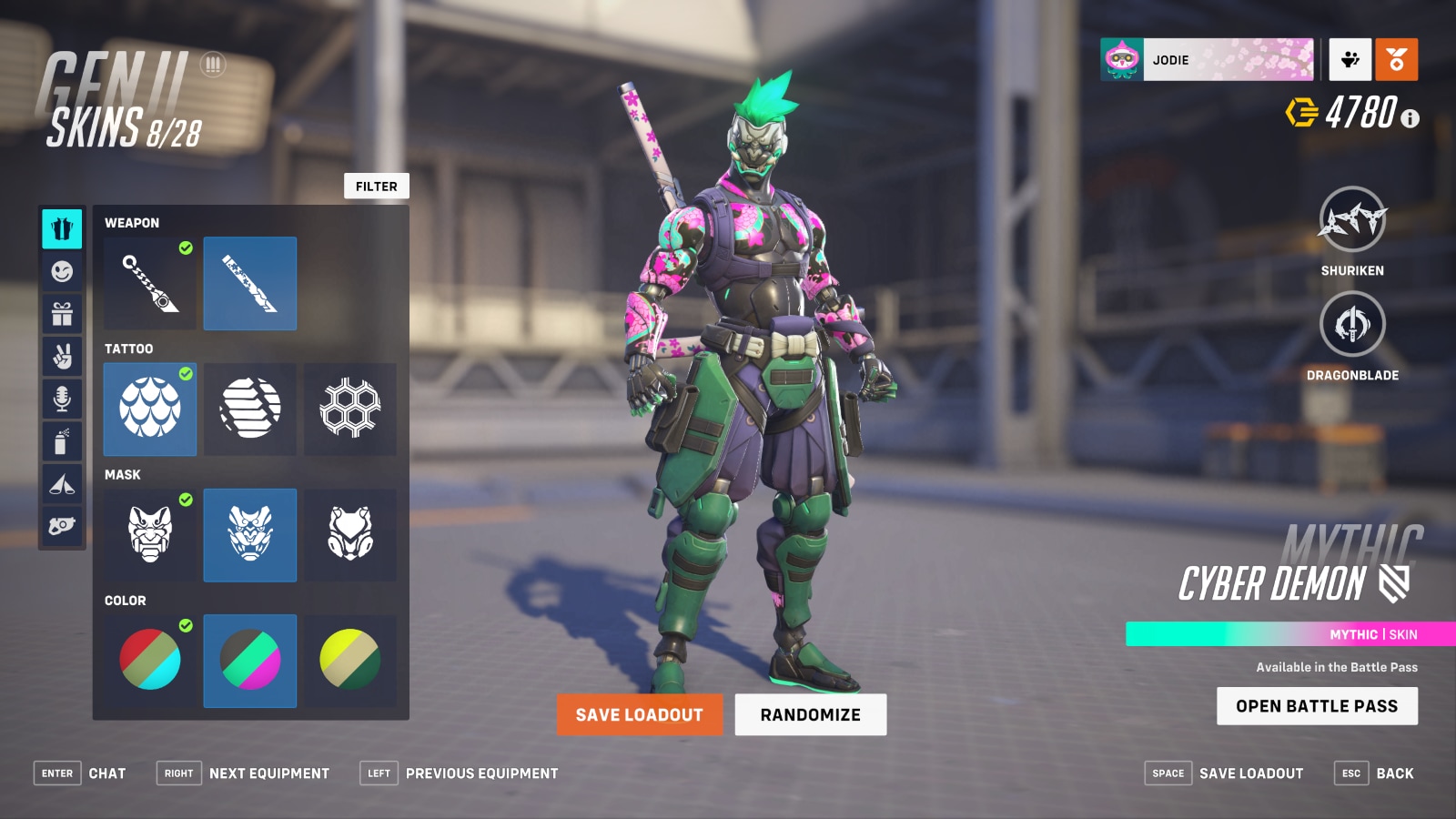 “The Dragon model for his ultimate was also re-designed, which we’ve rarely done in the past,” explains Mianowski. Genji’s mask opens during Dragon Blade, hero poses, and one of his highlight reels. Because of this, all of Genji’s animations were reviewed and tweaked by the animation team as well to make sure all three of the masks animated and fit correctly over the skull underneath.

Getting all the assets into the game required a whole new pipeline to account for the extra customizations and additional technical requirements. “Optimization was an important part of the process,” comments Mianowski, “We made Genji’s Mythic skin as rad as possible, keeping game performance in mind for everything we created.”

We made an all-new UI that allows players to get creative with their combinations, and the tech art team worked hard to make sure all the pieces fit together and work correctly in-game. Once these pieces were all in place, the skin was ready for visual and sound effects that make Cyber Demon as sharp as Genji's Dragon Blade!

The light becomes me... but not without VFX

VFX are visual animations that add special effects to the 3D models. This can look like explosions, muzzle flashes, or ability effects like the poisonous cloud when someone steps on Venom Mine.

“For Genji, once we could see the skin in-game, we started messing around with changing the effects on his shuriken projectiles and Dragon Blade—all his abilities got updated for this skin,” Wilson explains, "Everywhere the skin exists in-game was redesigned, including hero select, emotes, highlight intros, etc.-- making this the first time we’ve replaced a full suite of ability assets for a skin."

Wilson continues, “We began with the ambient stuff, like when he opens his mask there’s some smokey energy things going on in there. From there, we experimented with his abilities because we wanted to push Mythic skins further than we originally planned for VFX.” 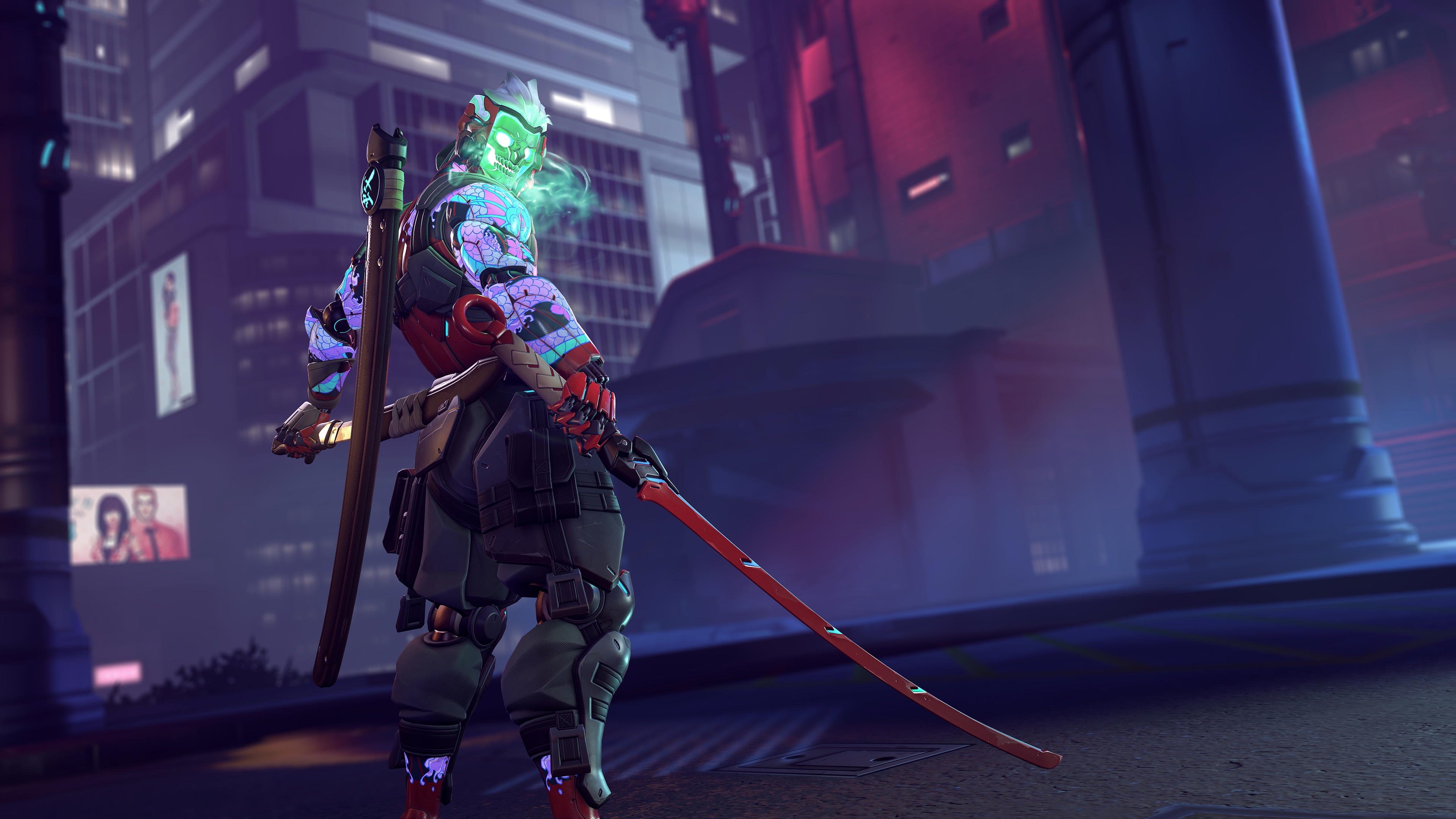 "We layered on all these effects to the model, but they had to make sense from a gameplay perspective,” continues Wilson, “The special effects are only seen by allies because there’s a lot going on visually in Overwatch, especially in battles. We made every decision with gameplay in mind— then we pushed the art as far as we possibly could within that framework.” 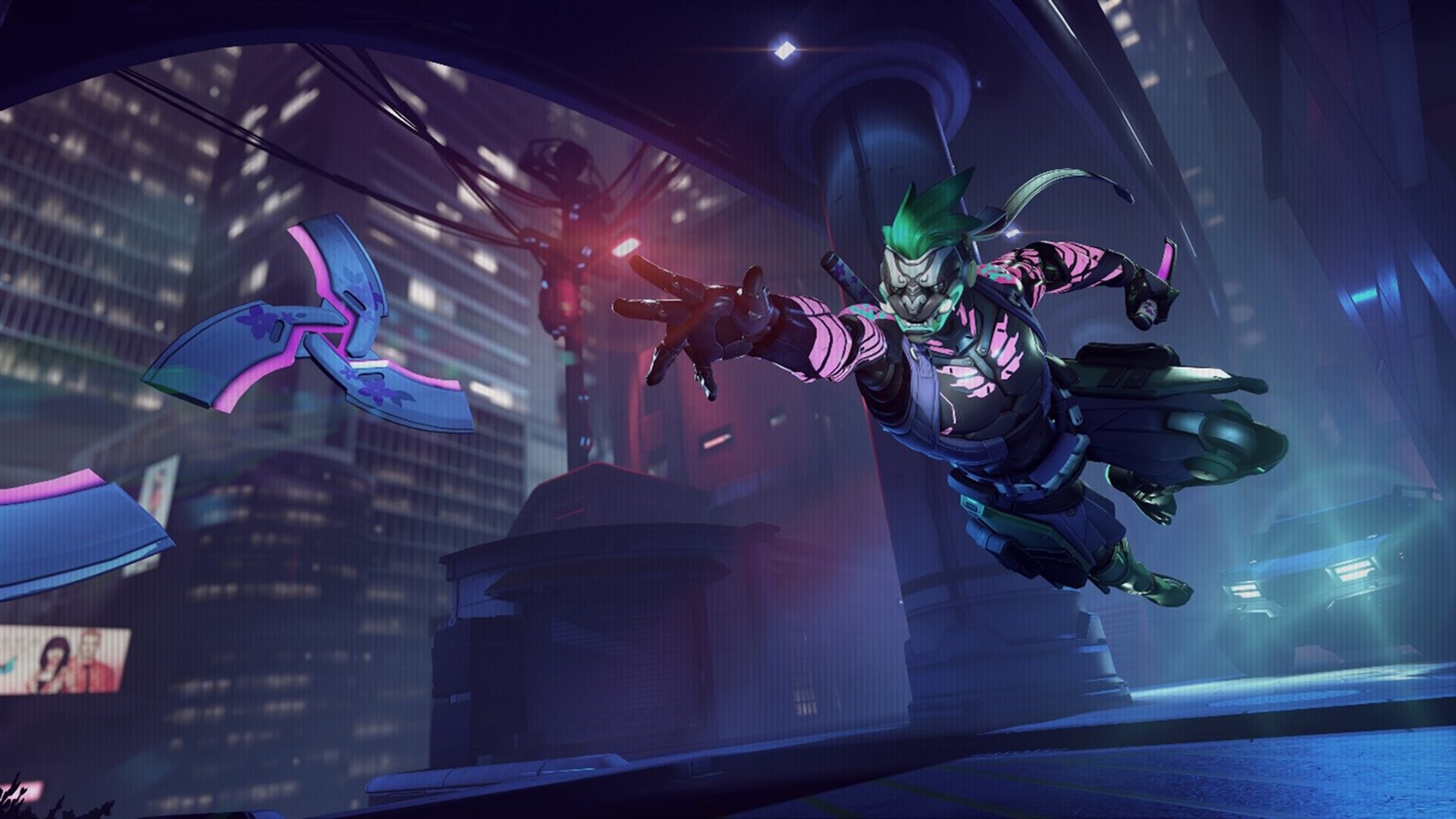 Modeling typically comes sequentially after concept art when creating a skin, however, VFX and SFX work in tandem to create the visual and sound effects that you see, and hear, in-game.

SFX are sound effects that add immersive audio to the game. This can include everything from the sound of Genji’s reload to the skin-specific voice lines.

“The audio coverage for Cyber Demon Genji was much more comprehensive than anything we’ve ever done before,” begins Rhein, “We reimagined Genji’s audio aesthetic by leaning into the concept art and themes surrounding the skin and the season.”

“We keyed in on the digital aspects of the cyberpunk theme and applied that sonically to the effects in his kit by gravitating towards synth-y, software sounds. His ultimate was inspired by the concept art Qiu worked on to produce a very digital-sounding sword.” You can compare the SFX from the base Dragon Blade with the Cyber Demon Dragon Blade in this video:

Many of Genji’s emotes, highlight intros, and weapons have unique sound effects while using Cyber Demon. “Dragon Blade has a distinct hum that changes pitch when he takes swipes at enemies,“ says Rhein. “We wanted to play on Genji’s cyberization, so we made his blade feel sharp and electronic."

"It almost sounds like it’s burning hot when he slashed into his targets.”

These different disciplines all played a vital role in creating our first Mythic skin. Cyber Demon Genji is just the start of all the things we’re excited to share with players, and we’re really stoked to see players using the skin in-game!

Rhein concludes us perfectly by saying, “We hope it’s as satisfying to play with as it was to create!”

Season Two is on the horizon, alongside our newest hero, Ramattra. Keep an eye out for more information leading to Season 2, and we will see you soon! 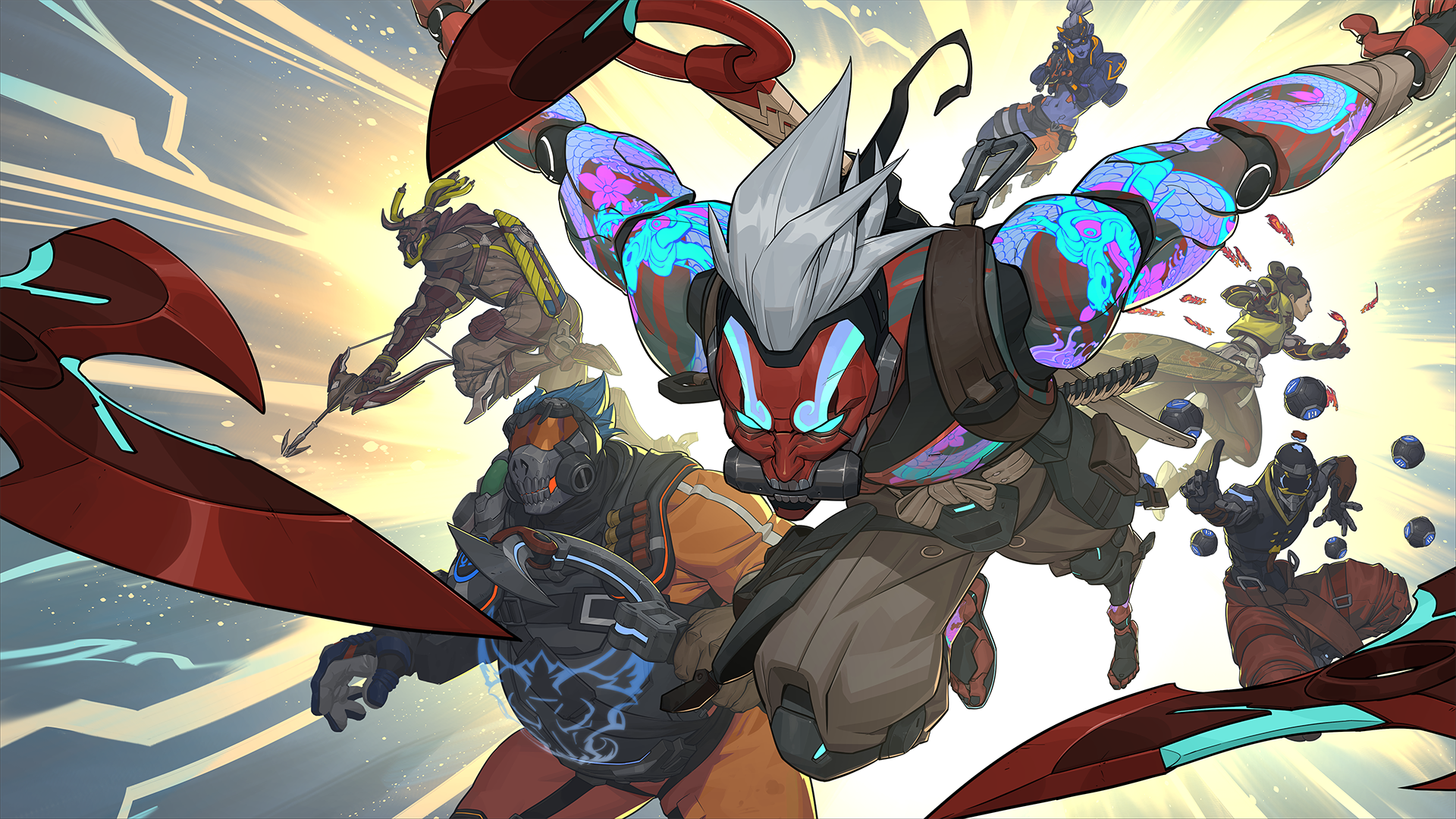