A most impressive display: Behind the latest Lunar New Year skins

Lunar New Year is a special time to pay homage to times past while celebrating the hope for a better future. This year is no exception for Overwatch as we look forward to the Year of the Tiger, and honor the beast symbolic for courage, respect, and momentous changes yet to come. 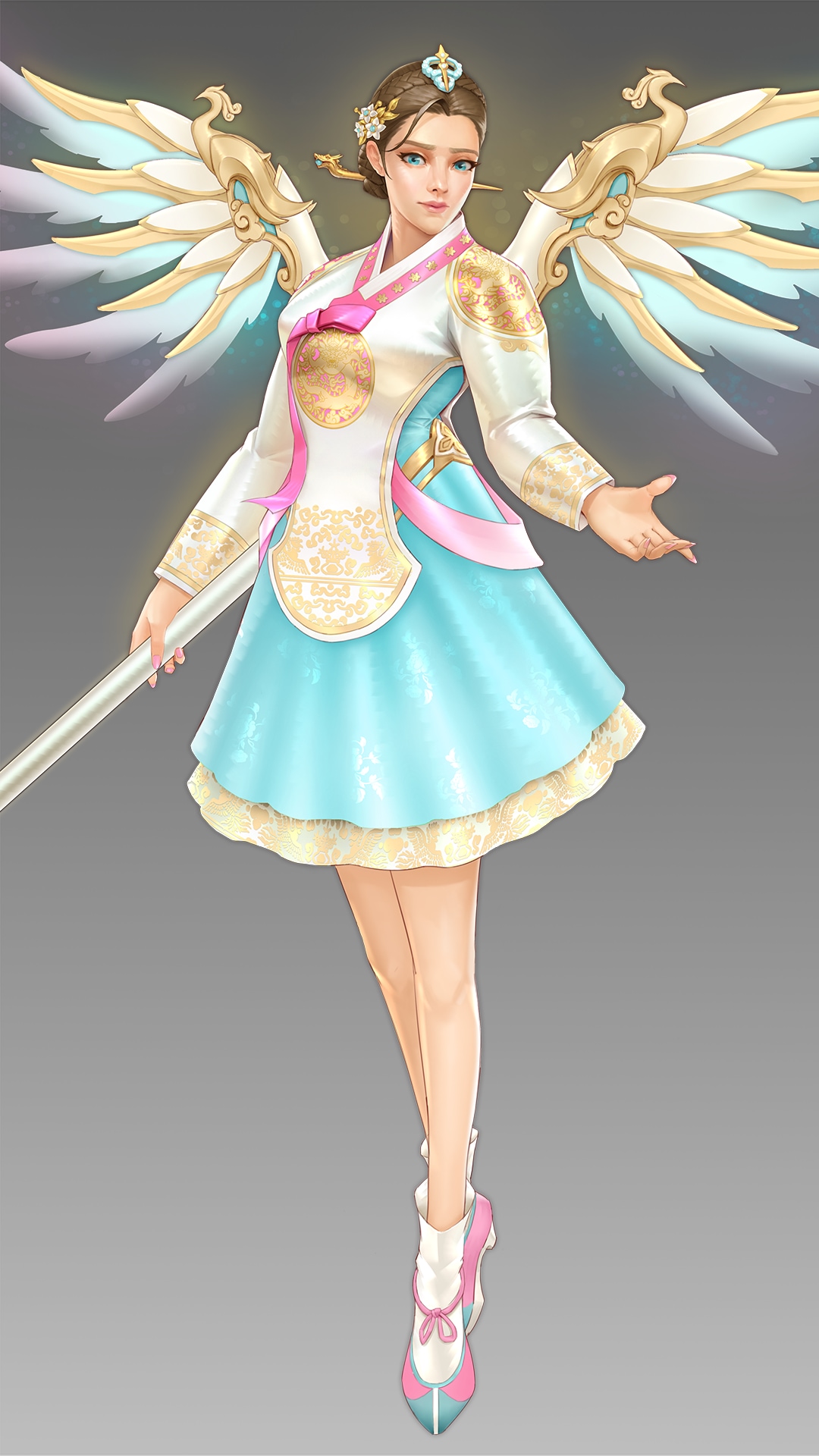 Kang began the ideation for Seolbim Mercy by attempting to portray themes like beauty, grace, and royalty. One of Kang’s top priorities was to create a skin that honored Korean culture and Lunar New Year. “We are really proud of the Hanbok—a traditional Korean dress,” says Kang. “We wanted to create a Hanbok gown that would have been worn by royalty or for people of higher status.” The concept art team worked closely with our teammates in Korea to make Mercy’s Hanbok feel both realistic and authentic.

When asked about his favorite elements of the skin, Kang replied, "I really like the sharp contrast between her Eastern-influenced hair and the Western features in her original hero design. I also enjoyed adding details to her weapons to make them feel both royal and true to Korean culture.”

The most challenging parts of the skin to design were also the most rewarding for Kang to work on. “Every time I work on a Lunar New Year skin for Korea, the most difficult part is representing and doing justice to another culture,” says Kang. “As a Korean-American, I feel a huge sense of pride working on Lunar New Year skins.” The finalized skin is an elegant tribute from Kang and the Overwatch team to an equally beautiful holiday and culture. 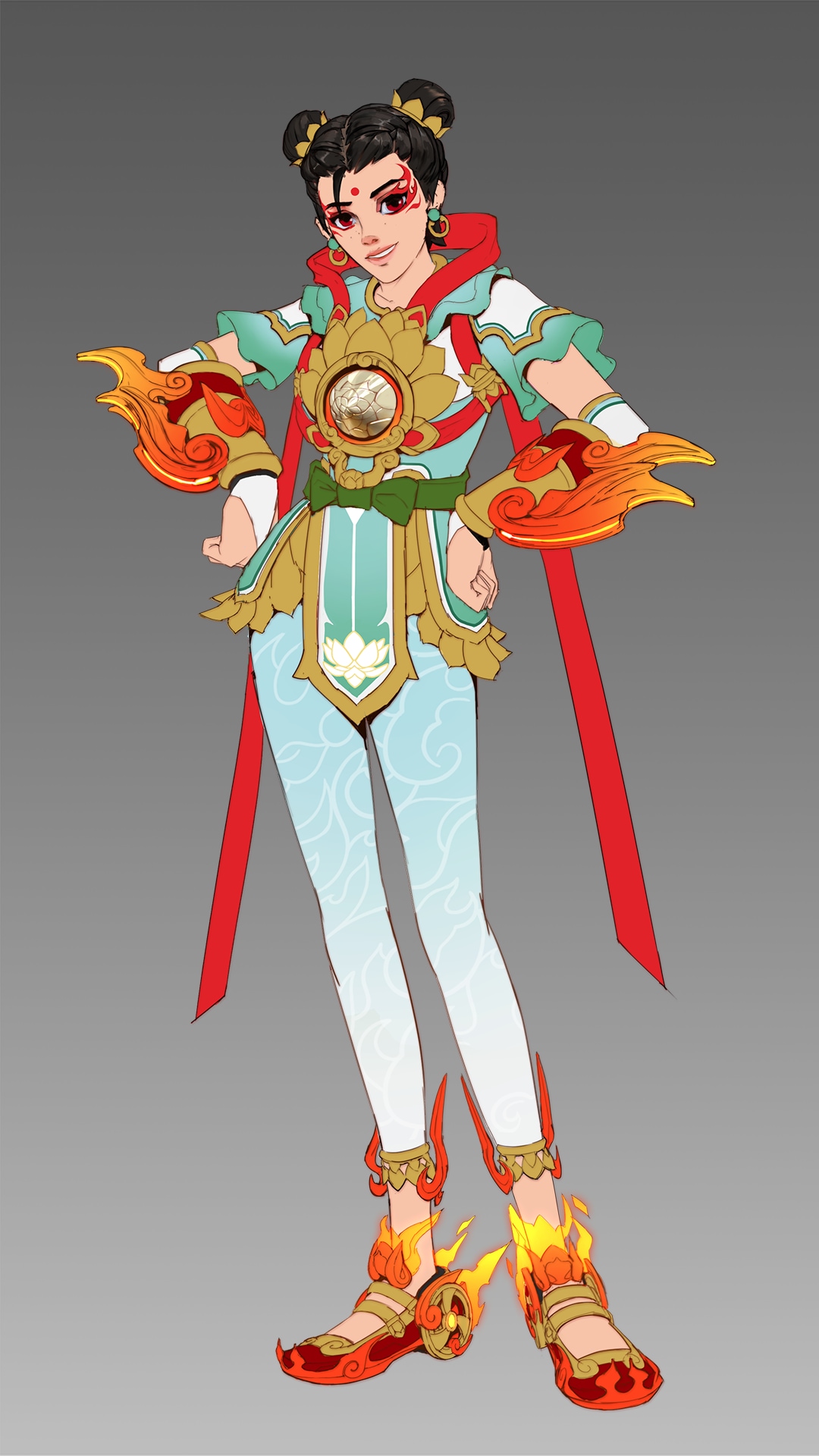 Nezha Tracer was created by concept artist Tim Guo through close collaboration with the Overwatch team’s colleagues in China. Guo was up for the challenge of creating this skin because he saw a lot of Tracer’s personality present in the Chinese deity. Nezha is known as a patron saint for children and misfits. He has a complicated relationship with his parents, but his story is ultimately one of bravery and reconciliation. Nezha is often depicted as a spunky, fire-spirited, mischievous god who is quick on his feet; sound familiar?

Guo wanted to manifest these characteristics in Tracer’s skin while using traditional depictions of Nezha for inspiration. “While I was putting together the concept, we had to incorporate the flaming wheels that are almost always included in depictions of Nezha,” said Guo. Nezha is also frequently shown with a red sash, but it was initially quite difficult to incorporate a sash on Tracer due to collision physics in-game. When asked about these challenges, Guo said, “We wanted to create something that belongs to Overwatch but still has the visuals that make her recognizable as Nezha.”

Another way Guo transforms Tracer into Nezha is through her fiery face paint. “Normally Tracer has goggles on, but that didn’t quite fit the deity we were trying to represent. Without anything, Tracer’s face felt empty, so artistically we are making up for the visual weight of the goggles with her fiery face paint.” The completed skin encompasses the spirited personalities shared by both Tracer and Nezha!

Come earn your stripes, skins, and loot boxes as Overwatch celebrates Lunar New Year with our event from now until February 12 at 11 A.M. PST. Wishing you good fortune, joy, and a Happy Year of the Tiger!