A beast of a time: Behind Tiger Huntress Ashe and Pale Serpent Widowmaker

Swathed in shadow, a serpentine spirit tracks a target through the scope of her gun. A second before her lethal shot lands, an enormous robotic tiger steps in front of its mistress, shielding her from the sniper and allowing her a moment’s reprieve to step back and take deadly aim at the one who sought to do her harm. A skirmish has broken out on the battlefield of Lunar beasts—and you’re invited.

Overwatch Lunar New Year is a grand celebration of culture and an event that’s dear to many team members. It’s also a chance for concept artists to tell stories through the skins they create, having designed skins in past years that represented characters from Wu Cheng’en’s Journey to the West, the Four Symbols, and the great lords of Luo Guanzhong’s famed Romance of the Three Kingdoms.

This year, beasts of legend have convened to ring in the Year of the Ox, granting players the ability to flit around the battlefield as Kkachi Echo, strike from the shadows as Pale Serpent Widowmaker, sic a beastly B.O.B. on unsuspecting enemies as Tiger Huntress Ashe, and more.

Senior concept artist David Kang and concept artist Tim Guo discuss bringing this event’s Ashe and Widowmaker skins to life and what being able to create Lunar New Year designs means to them.

Is there a specific part of the creative process that you’re always super stoked to dig into whenever you get to create something new?

Kang: For me, it’s the initial ideas and designs that we come up with before choosing the final theme. The audience only sees the final skin, but there are probably three or four different concepts within the same theme that didn't make it out. I always enjoy the researching part of the process at the beginning for each skin. I learn something new every time. This time I learned a lot about Korean mythologies and animals.

Guo: I enjoy figuring out how to mesh the Overwatch heroes with compelling themes inspired by different cultures. When creating a new design, I like to explore using lots of different materials, textures, and surface finishes to give the design a sense of culture or history. This skin was actually my very first legendary skin since joining the character concept team, and I received a lot of help from the team for both the aesthetic and the technical aspects of the design.

What mythology inspired these skins?

Kang: The inspiration for Ashe’s skin was Dangun, a Korean myth about a bear and a tiger. In the tale, a tiger and a bear prayed to the gods that they might become human. Upon hearing their prayers, the gods gave them twenty cloves of garlic and mugwort, ordering them to eat nothing but these sacred goods and to remain out of the sunlight for 100 days. While the tiger gave up, the bear persevered and transformed into a human—hence the bear theme for Ashe and the tiger for B.O.B.

Guo: The inspiration for Widowmaker’s skin comes from the Chinese folk tale “The Legend of the White Snake,” in which a white snake spirit takes on the form of a woman named Bai Suzhen.

What about these skins is personal to you?

Kang: Doing Korean Lunar New Year skins is always personal to me because I’m Korean myself. Making this skin brought back fond memories of learning about the myth in Korean school as a child.

Guo: A lot of Chinese people like me grew up reading novels and watching TV adaptations of “The Legend of the White Snake,” so it was really exciting to get to make my own adaptation of Bai Suzhen into a skin for Overwatch.

Why were these specific themes chosen for these characters?

Kang: We thought the myth of a human and an animal was a great fit for Ashe and Bob. Everything about it felt right—the bear transforming into a female human, and B.O.B. as a robotic tiger.

Guo: Bai Suzhen from “The Legend of the White Snake” is both a deadly animal and a beautiful woman—a perfect fit for Widowmaker, who embodies both of those qualities. And although the legend was already familiar to me, I actually did not realize there were so many different adaptations. I ended up digging much deeper into the visual depictions of Bai Suzhen in different mediums such as murals, paintings, films, TV shows, and even Peking Operas. 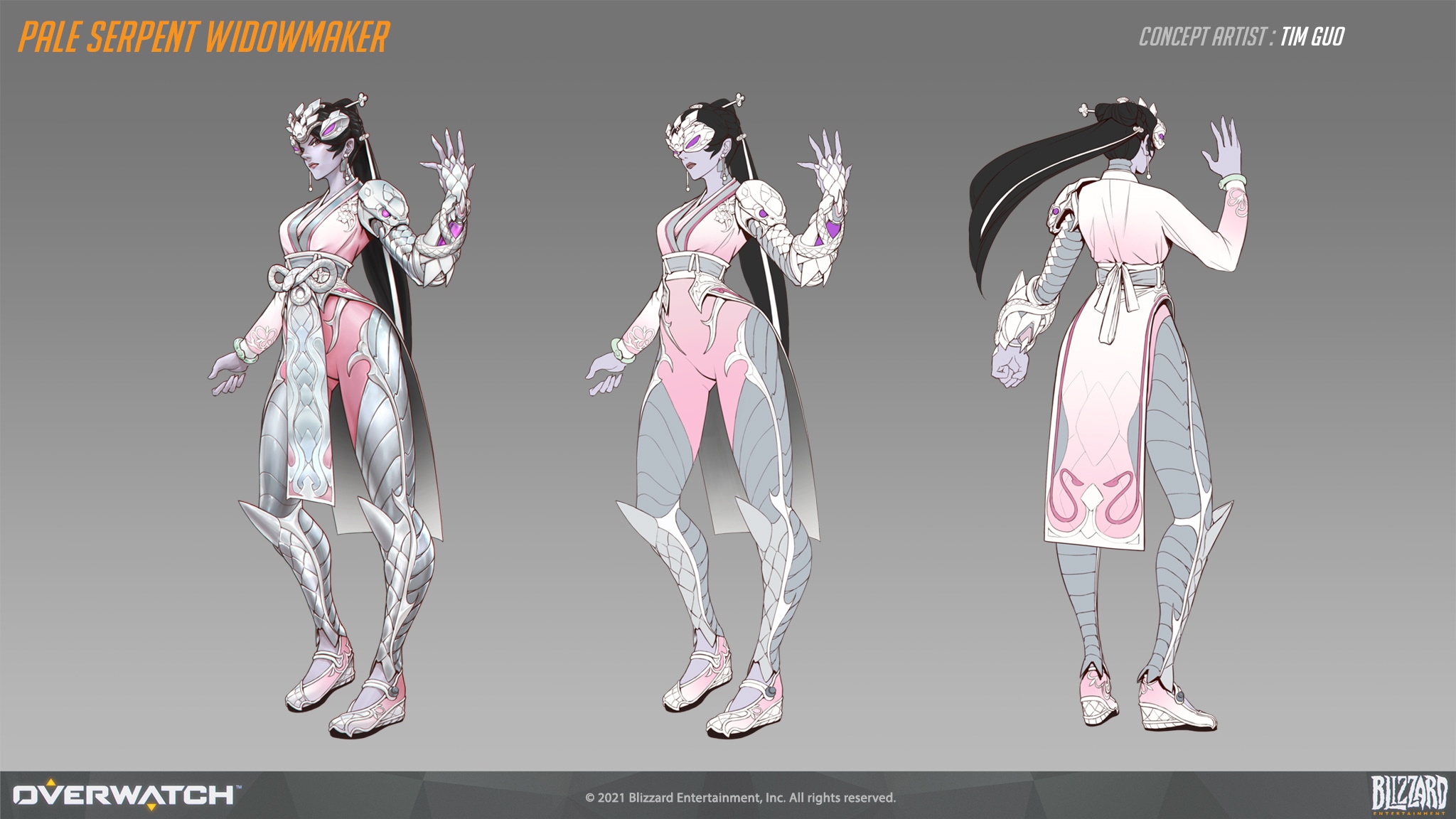 Kang: I enjoy sharing Eastern culture worldwide to audiences that might never have otherwise come across mythologies like these.

Guo: Yeah, I also think my favorite part about getting to design Lunar New Year skins is tapping into my own culture and finding stories to tell through our heroes. It's also fun to make skins that are more colorful, celebratory, and festive, as opposed to the darker, edgier sorts of themes.

Do you have a favorite detail on the skin?

Kang: The designs on the backs of Ashe and B.O.B. I tried to mimic traditional Korean art and incorporate designs of a bear and tiger.

Guo: One of my favorite details on the skin is the green jade bracelet. In the folktale, Bai Suzhen has a green snake companion called Xiaoqing who always stayed by her side. I didn't want to leave her out of the picture, so I created a snake-shaped jade bracelet to represent her companionship. 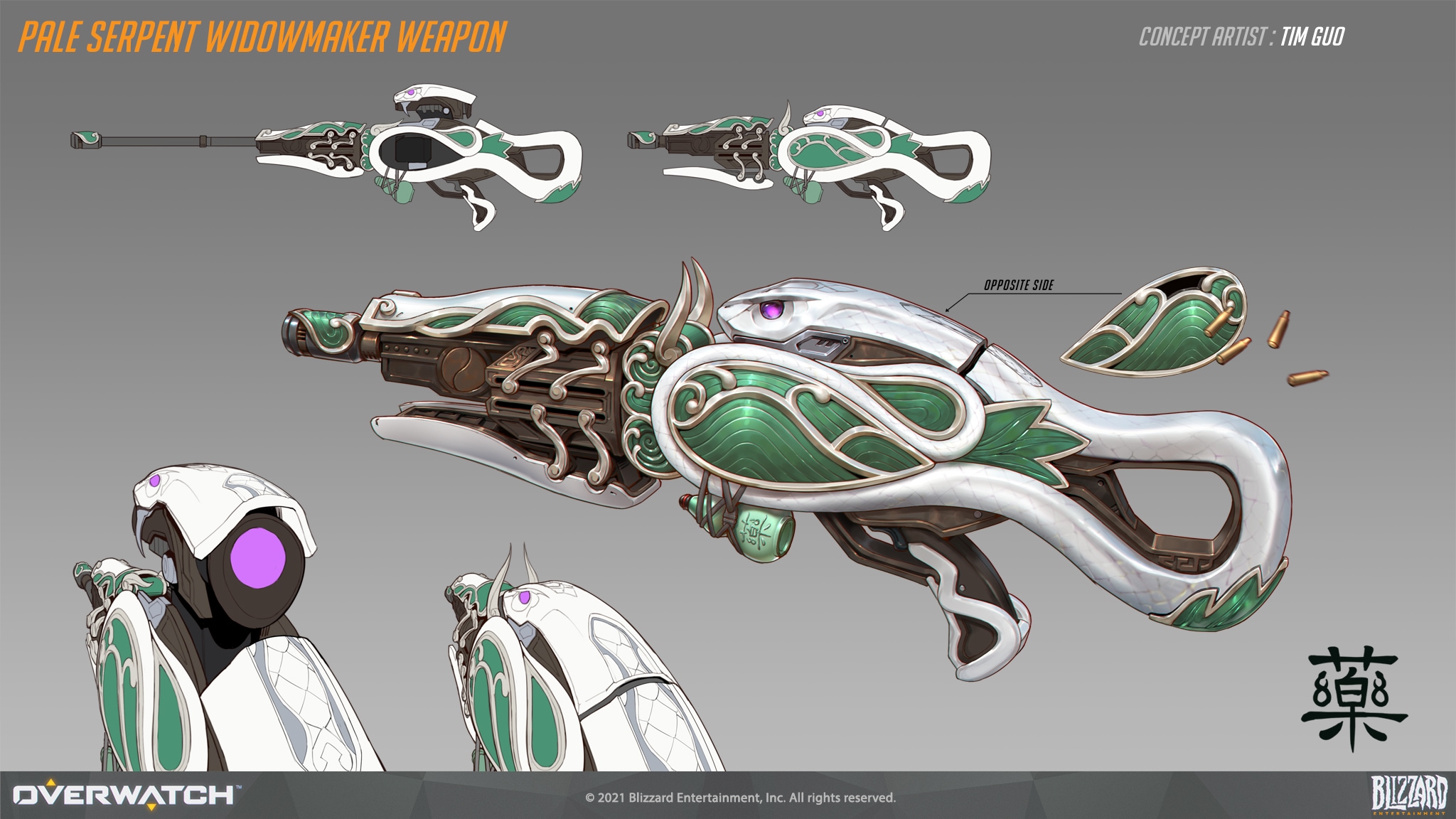 How do you make each new skin stand out from previous skins for the same character?

Kang: I try and make the skin as different as possible within the silhouette limit—playing with materials, colors, and most importantly the theme.

Guo: I also always first break up the silhouette where possible to make the overall read different than other skins. I try to use color palettes that haven't been used before; in this case, paler color choices like white, silver, and pink with purple and green accents make a unique combination that helps the skin stand out from the typically darker tones of other Widowmaker skins.

What do you hope about this skin and the event as a whole will resonate most with players?

Kang: I hope the players look into the stories and ideas behind the skins. I am sure they will come to appreciate them more once they find out what it’s all about.

Guo: Animals from legends and folktales always have a sense of wonder, playfulness, and mysticality, and I hope these skins can evoke the same feelings for our players. For anyone unfamiliar with some of the backstories, I hope these skins can be an invitation to check out the amazing works of art and literature that inspired us.

It’s time to charge into the fray and celebrate the return of Overwatch Lunar New Year with festive cosmetics, weekly rewards, and a new brawl that will put your skill as an outlaw to the test: Bounty Hunter!