Nestled in the shadow of Hanamura Castle, Kanezaka is a quiet area that straddles tradition and modernity. Weathered wooden buildings and a Shinto shrine guarded by solemn stone foxes border the bustle of a high-rise cityscape that trickles into the town proper. Kanezaka is full of whimsical detail and small, subtly hidden homages to the Overwatch team. Players can cuddle up at the cat café, drop by the seedy local bar, or gleefully obliterate some claw machines at the Pachimari FunFun! Arcade.

Catch up with some of Kanezaka’s developers, including senior lighting artist Fabien Christin, senior artist Thiago Klafke, senior level designer Morten Hedegren, and associate art director Dion Rogers, as they talk map design, inspirations, and what it was like creating a map entirely through remote collaboration and Zoom-jamming.

What games or other media inspire you? Did anything specific inspire you as you were working on Kanezaka?

Christin: I worked a lot on game cinematics in the past, so I often use movies as sources of inspiration for lighting. I also get inspired by modern art and modern architecture, where design meets technology and real-life applications.

Klafke: I like modern Japanese architecture and how it’s represented in the best sci-fi anime. Ghost in the Shell and Akira were two I drew inspiration from for this map.

Hedegren: For deathmatch level design, some of the most inspirational games in recent years have been the Titanfall series and several Call of Duty games. The original Unreal Tournament and Quake 3 are also all-time greats. I draw most of my inspiration from the real world and try to research and reference the locations that influence the core of the map’s layout from the very beginning—in this case, places like Kyoto and Tokyo in Japan. 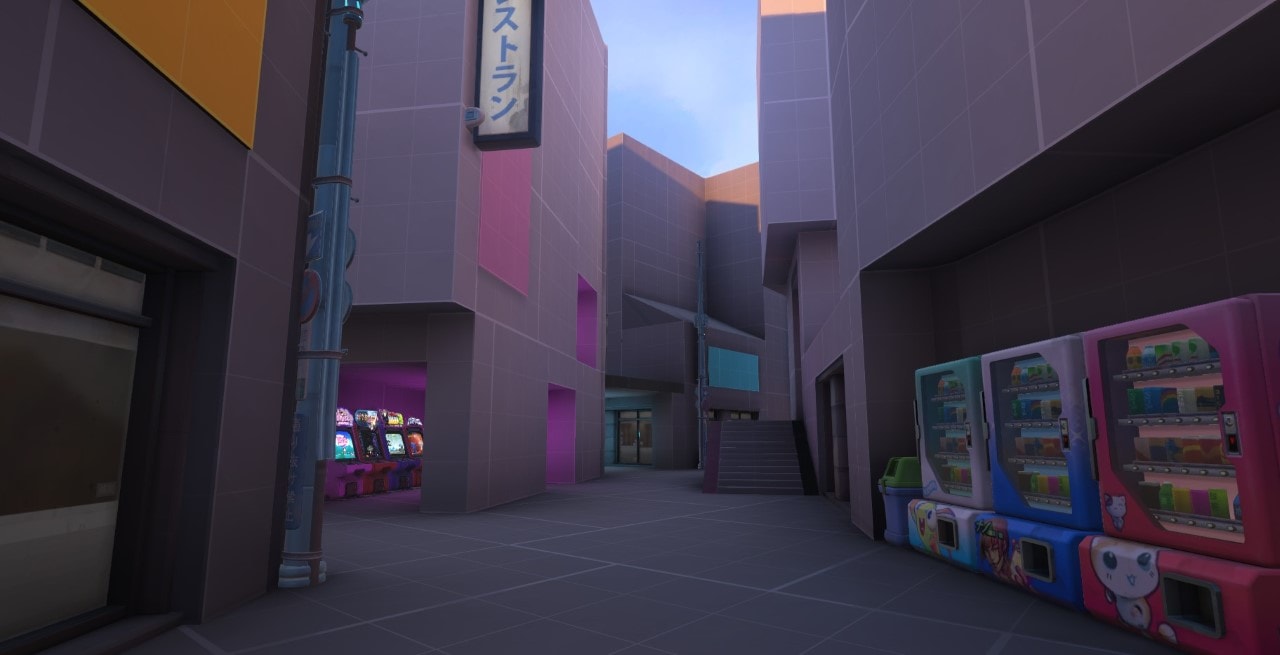 How’d you get started in the industry?

Christin: I studied computer graphics for film and visual effects for 3 years in an art school in France. My first job opportunity was at a game company, and I liked it so much that I stayed in the industry. You get to be very creative with a lot of freedom.

Klafke: I started by making Counter-Strike maps and Half-Life mods.

Hedegren: I also started out in the Half-Life modding community making maps for various mods like Counter-Strike, Day of Defeat and The Specialists. After a few years I got hired for my first professional job.

If you could choose any location for a new Overwatch map, where would it be?

Klafke: Kraków, Poland. This is a city that I visited a few times and fell in love with. The medieval architecture is beautiful and well preserved, the city has very pleasant plazas and open spaces, with lots of interesting shapes and colors! It’s also somewhat exotic for someone who grew in Brazil and now lives in California.

What are some of your favorite little details on the map that players might not immediately notice? Are there any personal or team references hidden anywhere?

Christin: I animated the extremely subtle hair of the mech pilot on the Virtual Travel Agency billboard. Plus, you’re welcome to get a (non-alcoholic) drink in my own cozy cocktail bar, Flamingo, on the 5th floor of the Kanezaka Mall. On the house!

Klafke: I really enjoyed working on the city part of the map, having visited Japan two years ago. I was happy to be able to draw inspiration from my trip to create new spaces in Overwatch. I took a large collection of reference pictures when I was there, and they were pivotal in making sure I created something that feels like the actual place. I can’t wait to go back to Japan and explore more!

Hedegren: The most adorable reference is probably that the cat portraits found in the cat café are based on Overwatch team members’ cats. There’s also an overpass with traffic driving on top of it that I love. If you’re playing very mobile heroes, this can be used in some spectacular ways to get on top of to dodge or flank other players. Just make sure you don’t get hit by any of the cars driving there! 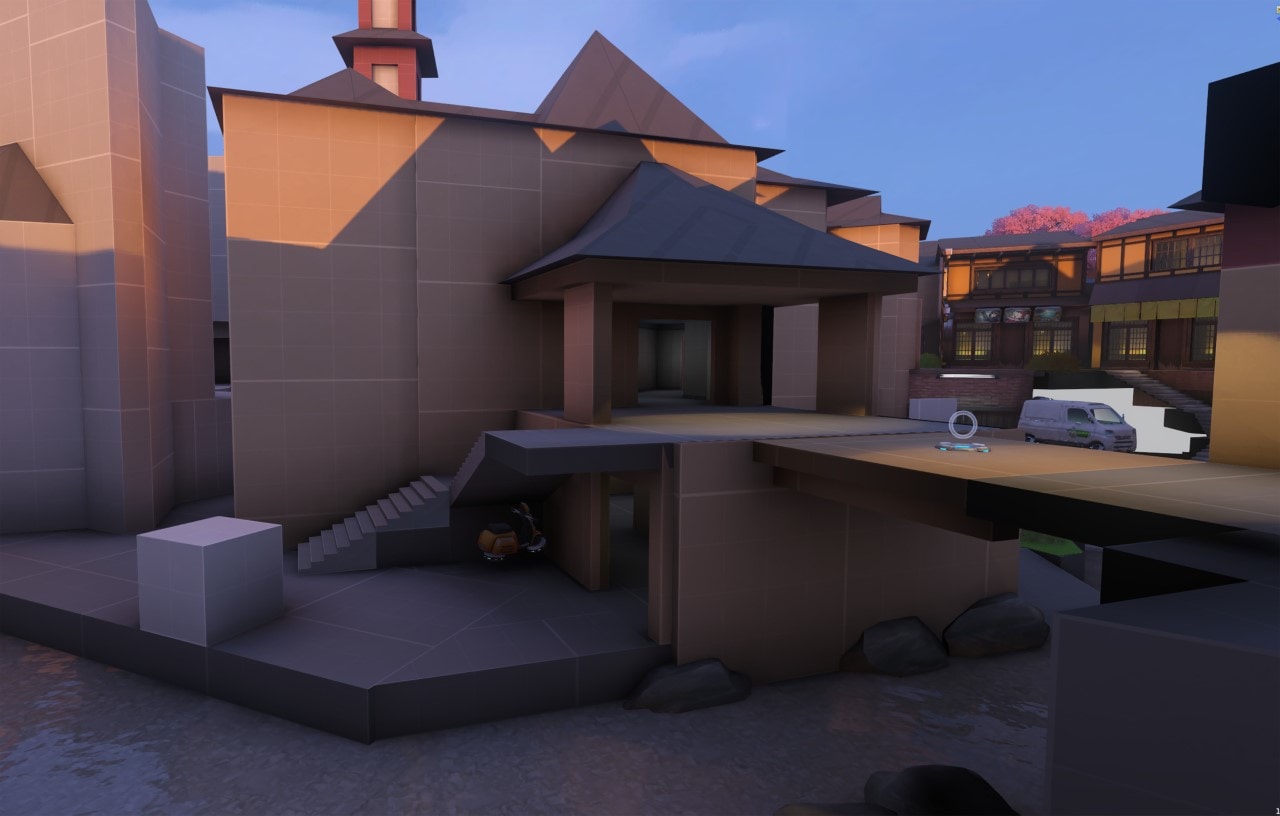 What can players expect from Kanezaka?

Christin: Probably to get killed by a Pharah hiding between the tall buildings.

Klafke: Intense deathmatch! This is a map where Pharah, Ashe, and McCree truly shine. There’s a lot of vertical action and little nooks and crannies to explore.

Hedegren: Kanezaka is a map with many contrasts. There’s an older, more traditional part of the city that contrasts a more modern part, as well as a layout that features lots of tight alleys along with larger open areas. The result is a map that we hope feels authentic to Japan while also providing something fresh and different to Overwatch.

What was collaboration like during work from home for an undertaking as large as a new map?

Christin: I would say the collaboration went very well!

Klafke: It did! We have a chat room where we talk daily about the map, sharing screenshots of our progress and asking questions. In this regard, the collaboration was actually easier than in the office, because in this chat room we have everyone involved in the production of the map. Everyone has visibility of what’s happening, what state we’re in, and what needs to be done.

Hedegren: This map was also entirely made while working from home, and as someone who’s never really done that before, it did take a bit of getting used to. However, the entire Overwatch team was super quick to adapt to working from home. Even though we’re not physically in the same space, the team has been excellent in always sharing ideas, playtesting, and giving feedback often, which has made the experience great. 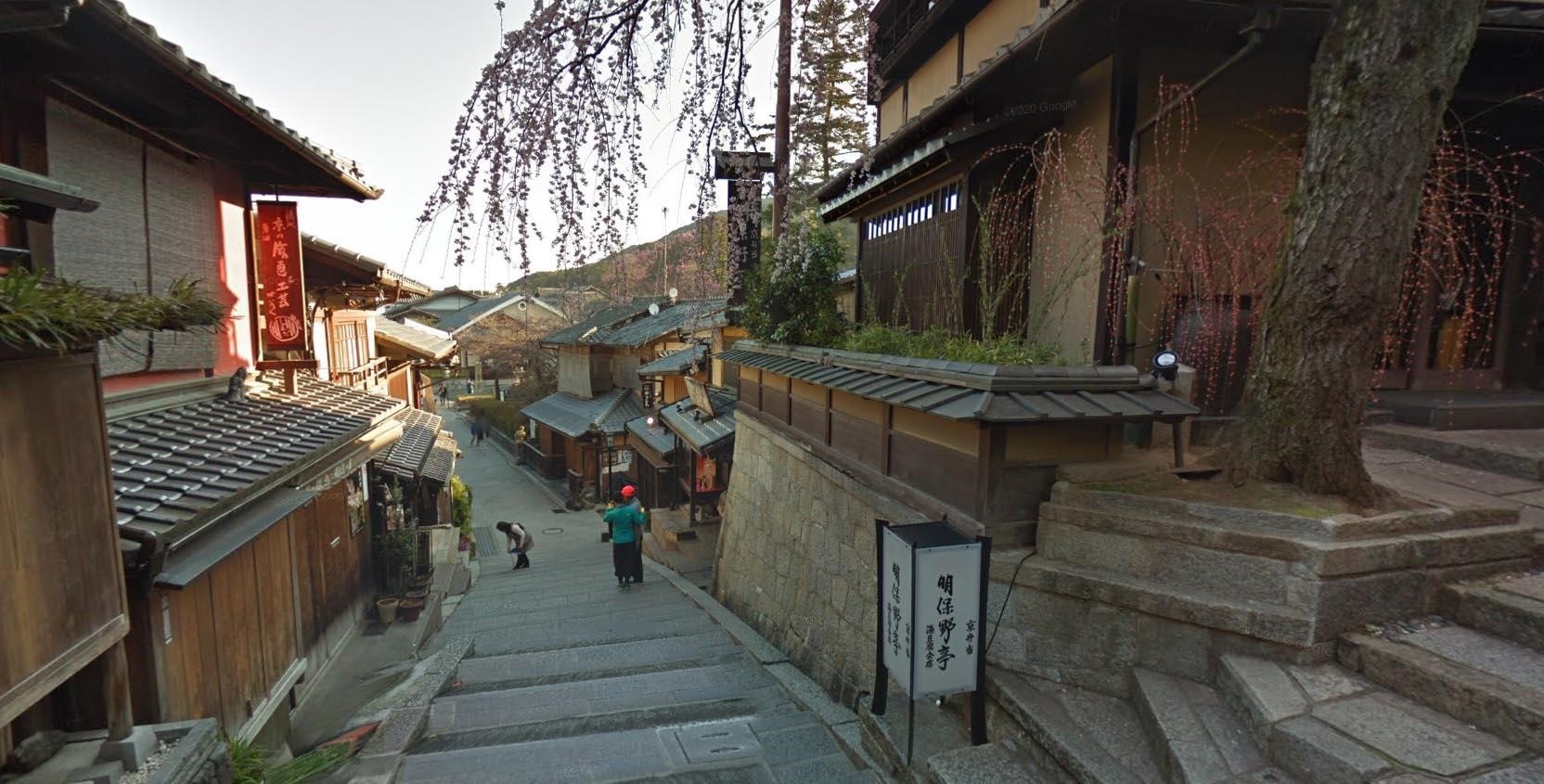 How does each small piece contribute to the larger story being told by the map?

Christin: For the lighting, it was pretty challenging to give the buildings and streets a distinct and recognizable mood that helps with navigation while still making the entire map coherent.

Hedegren: All the details that go into the map like the unique shops, props, and different themes throughout are important both in terms of creating an environment that feels believable and providing players with locations they can easily recognize.

How do you decide on what buildings will be on each map?

Klafke: It actually takes quite a bit of iteration. For Kanezaka, it was a matter of looking at the design blockout that Morten created, looking at my personal reference pictures, and walking around in Google Maps to see what would fit in each space. We had some buildings that came from the story team, such as the bar, but for others like the Pachimari arcade, cat café, mall, and Pugtato store, we had creative freedom.

Hedegren: The process of detailing and defining each area is a very collaborative effort where often everyone involved with the map pitches in with ideas. from what the theme of an entire building might be to smaller aspects like deciding which props will be placed on a table. On Kanezaka, we had a lot of real-world reference material for the location; as a result, the team had lots of ideas for various parts of the map.

What were some of the inspirations for Kanezaka and the locations within it?

Christin: Kyoto was the main source of inspiration, especially the Gion and Higashiyama districts.

Klafke: The city area was inspired mostly by Tokyo, more specifically the districts of Ikebukuro and Shimokitazawa.

Hedegren: Multiple people who worked on the map were fortunate enough to have been to Japan in real life, which meant we already had lots of ideas for locations. This included the older traditional areas such as the streets near Kiyomizu-dera, which has a cozy vibe with smaller buildings. 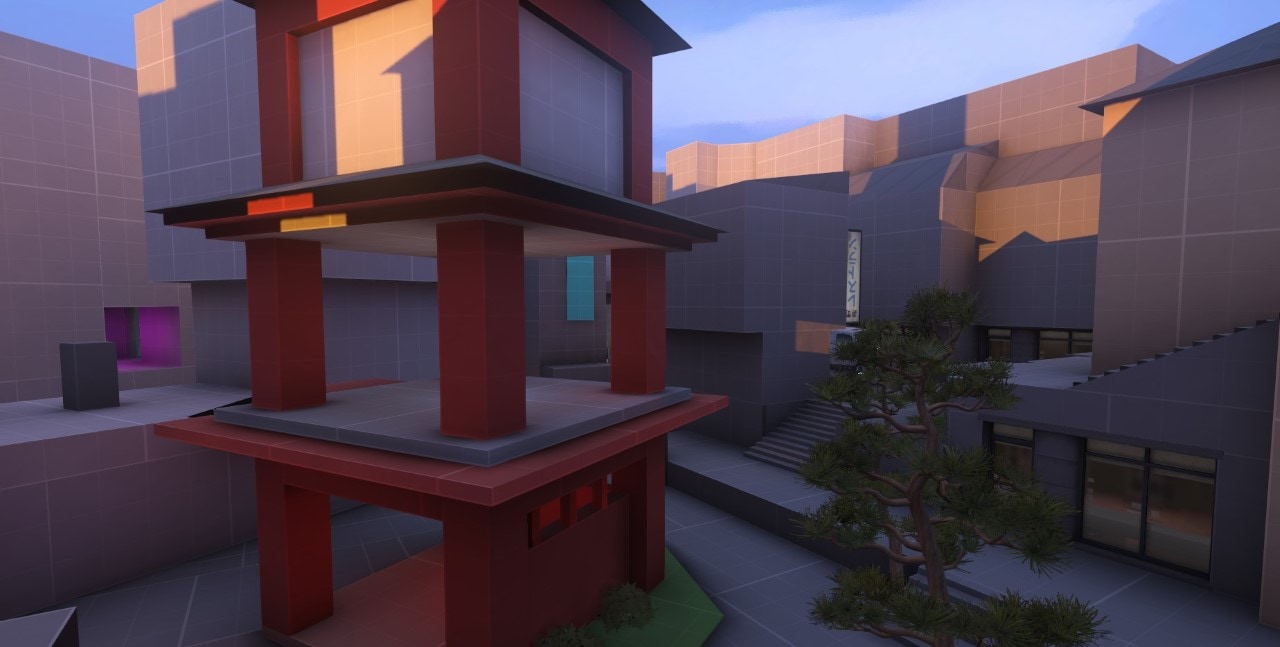 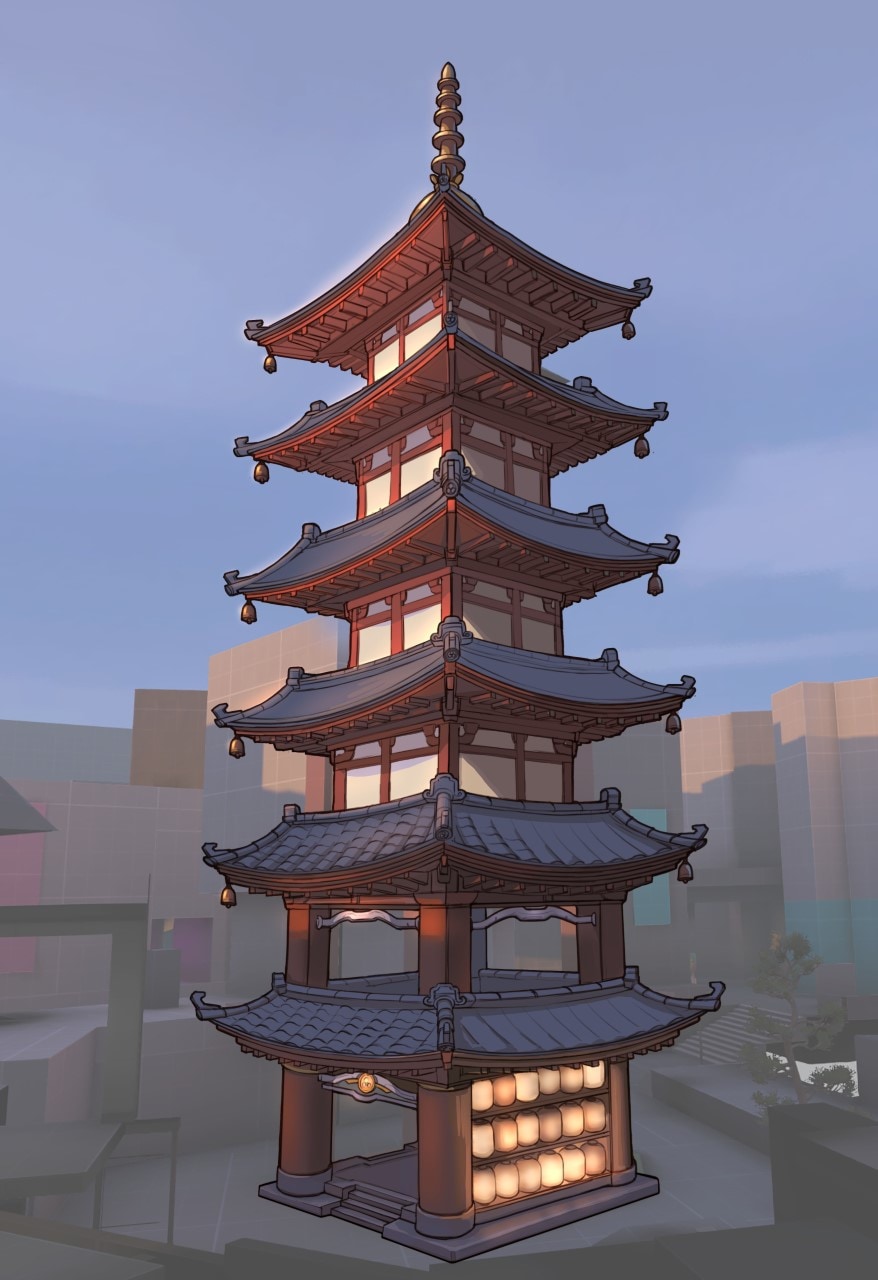 What limitations or freedoms do deathmatch maps provide versus more traditional maps?

Klafke: This map in particular is much tighter than a more traditional map. In a traditional map, we have more room to move large parts of it, which was a bit hard to do in this one.

Hedegren: While traditional game modes often need to follow a certain structure and layout to make sure they’re fair and balanced, deathmatch maps provide more freedom to create map layouts that are more unique. For example: control maps need to be symmetrical to ensure they are evenly balanced for both teams, and payload maps need a main path throughout for the payload to follow. For both of these modes, you need to ensure the time it takes to get from the spawn rooms to the objective feels just right.

For a deathmatch map, the most important factor is to create exciting spaces to fight in. The overall layout can be almost any shape we want. Deathmatch maps obviously need to be balanced as well, providing a good mix of long, medium, and close-range areas to make sure that all heroes have a good time.

How does the team select where new maps will be located?

Klafke: Most of the time this is decided by the game directors and team leads, but anyone who’s passionate about a specific theme can pitch an idea for a map. I’ve definitely pitched my share of maps.

Rogers: We have a list of global locations we’re interested in and usually pick the place the team is most excited about! Sometimes that location is related to a story moment or an Overwatch character. 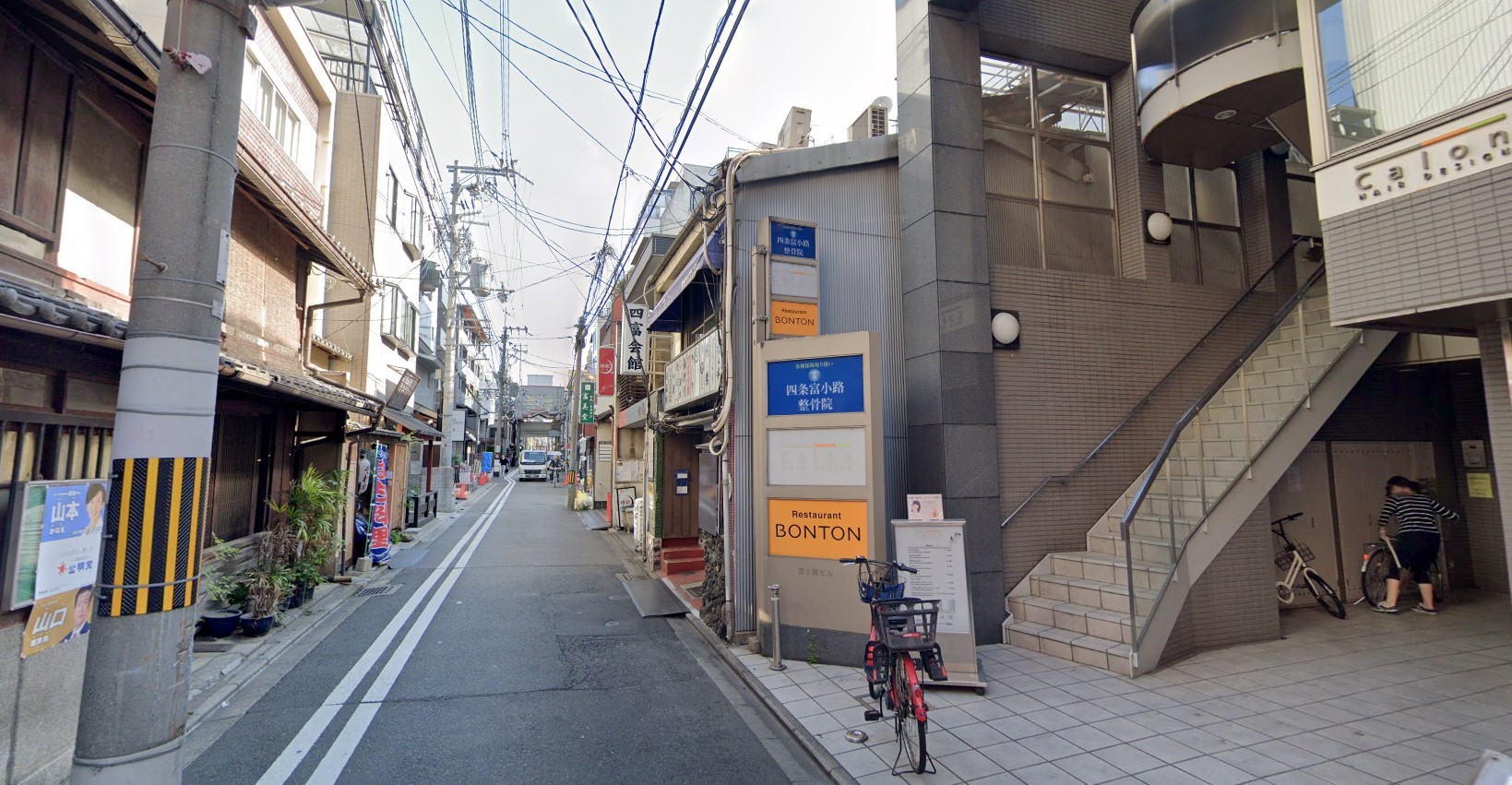 What is the process of creating destructibles for an environment like?

Rogers: “How fun would it be to destroy this object?” is a question we ask ourselves. Also, “what can we do instead of just breaking the object?” For example, the arcade machine spawns prizes after being destroyed. Breaking a fire extinguisher releases its pressure, causing the object to fly around the area. We are always looking for more ways to make our environments more interactive, especially with destructibles.

What do you hope players will enjoy most about Kanezaka?

Christin: There are so many details and different stores on such a tiny map, I hope they will enjoy the diversity of the place. We worked hard to recreate the atmosphere of a Japanese town, and I hope players will feel transported there until we can all physically travel again!

Klafke: I also hope they feel like they are immersed in Japan! If we can transport the players’ minds to this cool little space we created, our job as environment artists has been accomplished.

Hedegren: I’ve always wanted to play an Overwatch map that took place in larger parts of the city areas of Hanamura, which is the idea behind Kanezaka, so I really hope players will enjoy spending more time there. Everyone who worked on this map has a great amount of love for the setting, and I hope it shows.