Despite her sunny demanor, Dr. Mei-Ling Zhou has always had a knack for manipulating the colder elements to aid in her fight against the enemies of Overwatch. Now, utilizing the latest in temperature-dropping technologies, Mei has stepped out of the lab and into the Nexus to give her opponents a thorough thermal thrashing. 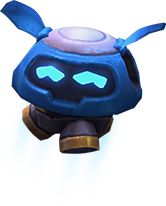