Now that the legendary warden Maeiv Shadowsong has no proper nemesis to hunt in Azeroth, she’s come into the Nexus to get her fix on Illidan (and plenty of other heroes) once again. She brings with her a ferocious amount of crowd-control (CC) and playmaking potential. To help you get the most out of Maiev, we spoke to Nils “Nurok” Gebhardt of Team Liquid to get his first impressions. 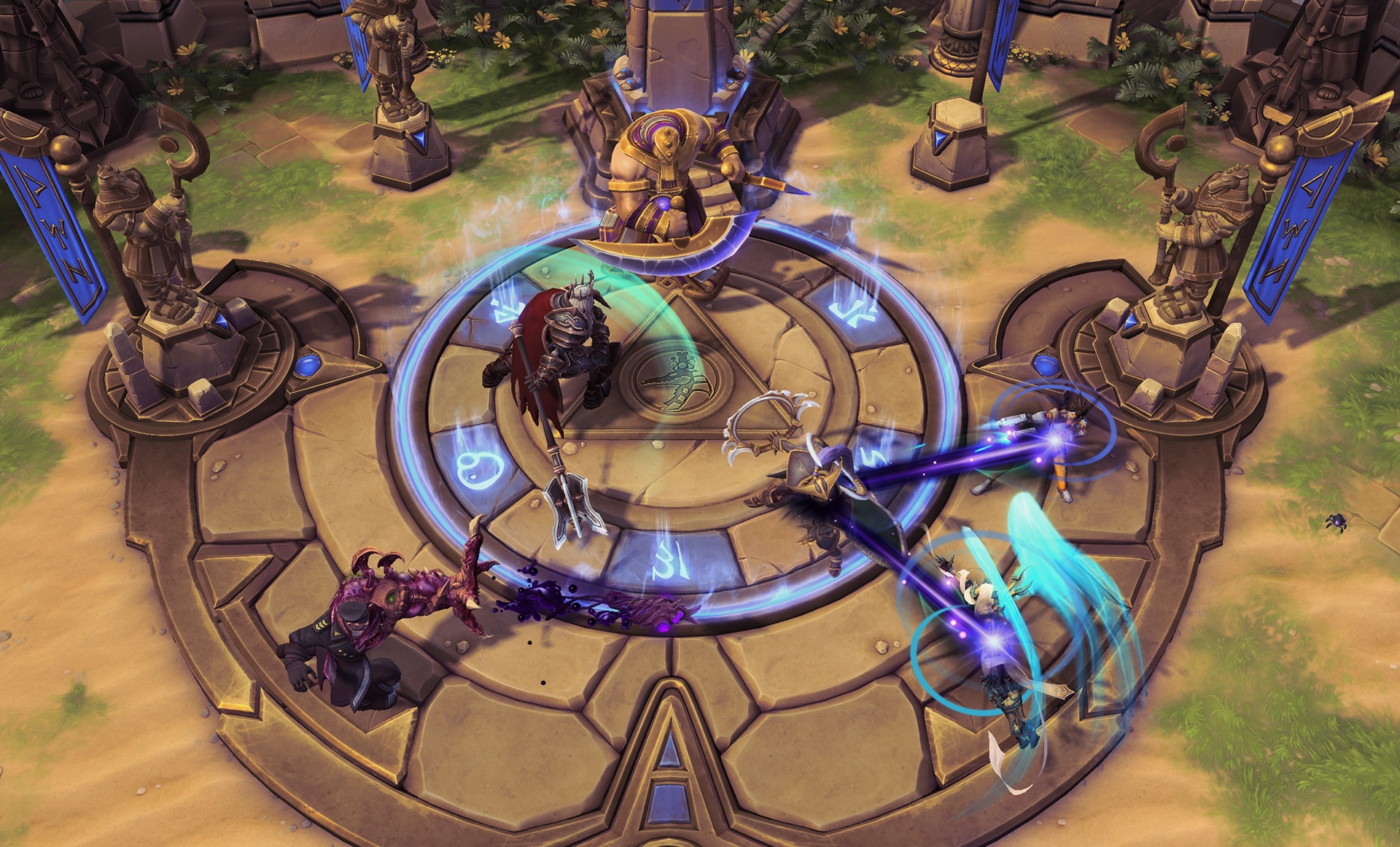 Nurok sees Maiev first and foremost as a playmaking hero thanks to the powerful combination of her trait, Vault of the Wardens, her offensive Ability Umbral Bind, and both of her Heroic Abilities. Vault of the Wardens allows Maiev to leap into the air on command, making her invulnerable to all hostile effects from enemy heroes, minions, or mercenaries for 0.75 seconds. Umbral Bind, meanwhile, tethers her to enemy heroes hit with her next basic attack, yanking them back towards her if they move out of her immediate vicinity. These two moves allow her to escape many life-threatening attacks and displace her enemies in a number of creative—and no doubt frustrating—ways.

“She’s naturally a playmaking hero thanks to her kit, and that is awesome,” Nurok says. “Her passive alone; it has a very high skill ceiling, and I’m sure there will be players who just use it randomly and not get much value out of it, but others will use to it dodge deadly attacks like Tracer’s Bomb, Ragnaros’ ultimates, or Malfurion’s silence. With a well-timed passive, you could dodge crucial CC and abilities that threaten your life.”

And once you’ve tricked the enemy team into wasting their most powerful attacks, you can follow up with Umbral Bind to pull them towards your team to unleash a wombo combo.

She’s A Big Fan of Knives 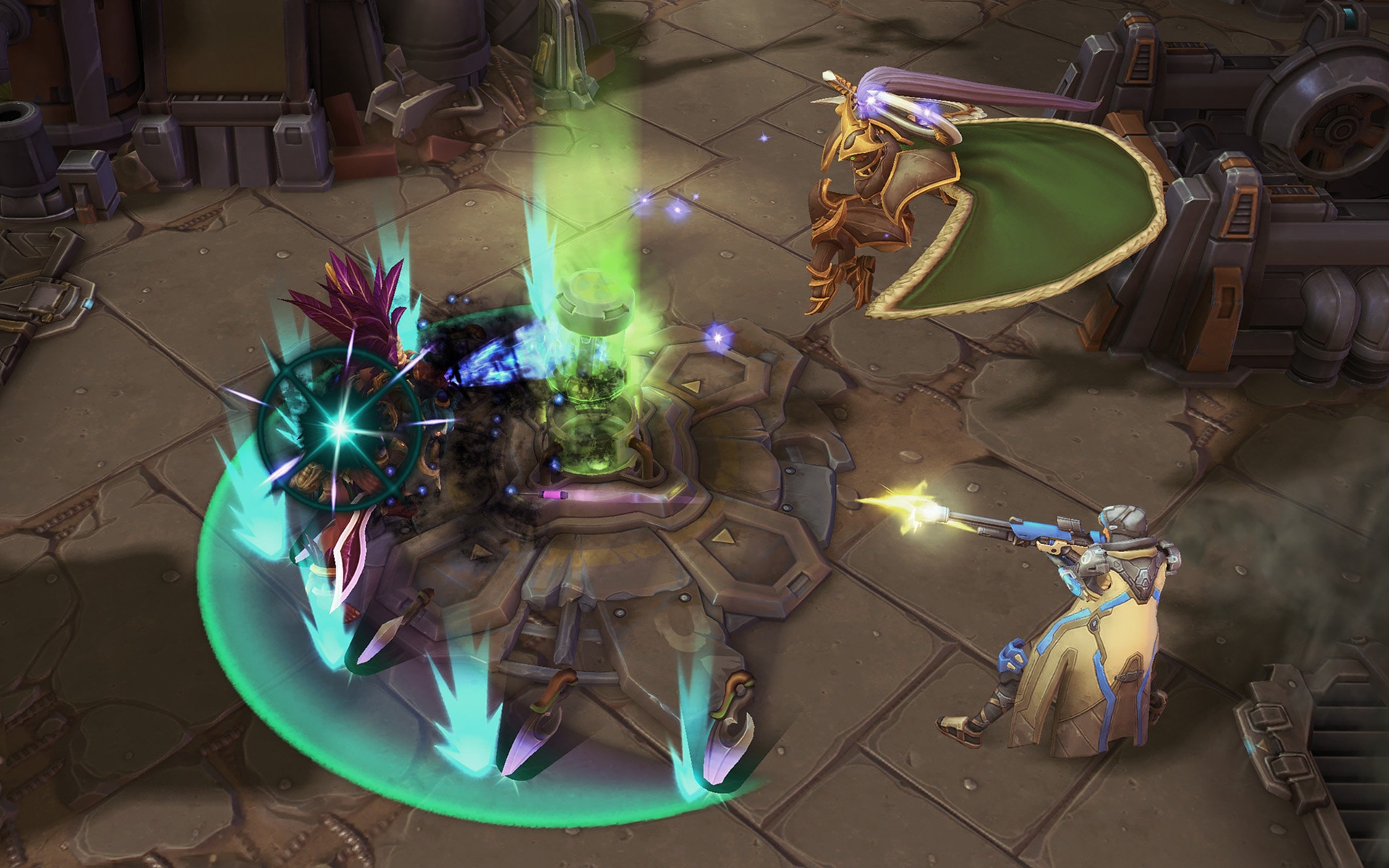 While Maiev’s crowd-control and agility might be key to her playmaking potential, Nurok thinks her Q ability, Fan of Knives, is her bread-and-butter attack for wiping out the enemy team. A quick crescent-shaped attack on a short cooldown (4 seconds) that’s made even shorter (0.5 seconds) if she hits two or more enemy heroes, the ability provides a lot of the damage she brings to any fight.

“If you’re Maiev, you kind of rely on your Q,” Nurok says. “Not one hundred percent, but your Q is your biggest damage output, and you want to land as many Q’s as possible in a short time-frame in team fights.”

Nurok therefore recommends focusing on upgrading Fan of Knives as much as possible early game with level 1, 4, and 7 talent picks. The level 1 talent Naisha’s Memento, which makes her basic attacks bounce between targets, might seem like a risky pick because you need to hit at least two enemies with your Q to recharge the ability any time you want to use it. But Nurok thinks that its late-game potential far outweighs any frustrations you might have early game if, say, you’re only laning against a single enemy.

“Naisha’s Memento will be less effective if you can’t hit two heroes at once very easily since it won’t recharge often,” Nurok says, “but I think it is still the best choice because even if you don’t get many Q hits early game, you might just win a team fight off it later in the game. Hitting two heroes at once with your Q is very reasonable once you start team fighting.”

The level 4 quest talent Pin Down gives Fan of Knives a strong power spike once it’s completed. For level 7, Nurok thinks it’s a toss-up between further increasing Fan of Knives’ damage with Elune’s Wrath and reducing enemies’ armor with the Bonds of Corruption upgrade to Umbral Bind—really, this just comes down to if you have to counter high-armor heroes specifically.

“Overall I think her Q is her strongest ability from her base kit, and you should just push it with additional talents,” Nurok says. “The level 4 Q quest is insanely strong. It increases the damage and range, almost a 50% damage increase on an ability with a 0.5 second cooldown if you hit multiple heroes.”

Nurok thinks that Maiev really kicks into gear after taking the level 16 talent Armored Assault, which increases her physical damage dealt by 35% whenever she has more than 15 armor. Keep in mind that all her level 13 talents give her ways to quickly increase her armor—Nurok recommends Shadow Armor over the other two simply because it’s “the most consistent,” saying that “all you have to do is press E, then press it again to get a guaranteed boost of 25 armor.” This means that once you unlock Armored Assault, it’s just a matter of timing your abilities correctly to start dishing out massive amounts of damage.

“It can be like Genji’s Dragonblade,” Nurok says. “You might just wipe the whole enemy team in three or four seconds.”

Both Heroics Are Good, For Very Different Reasons 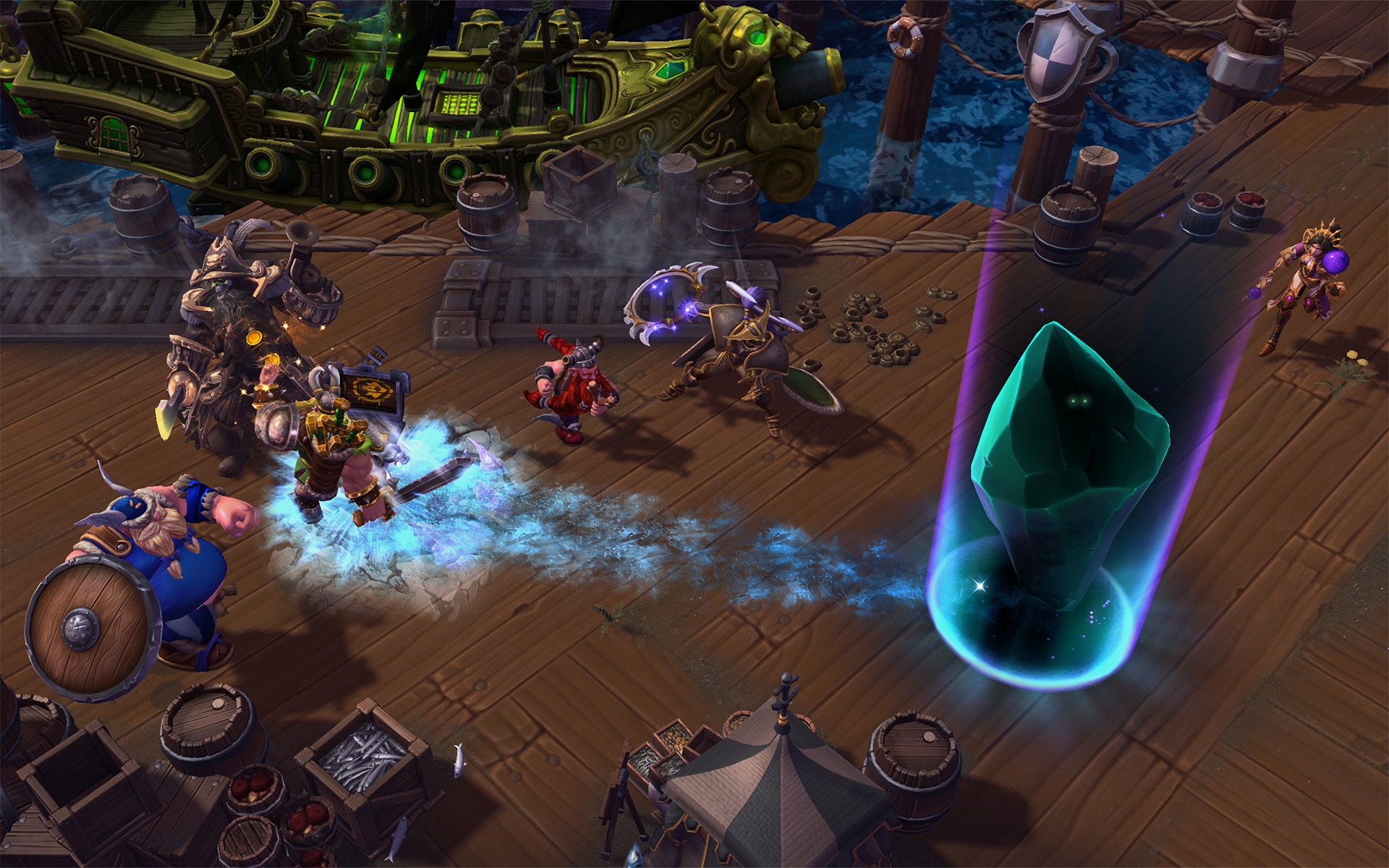 Nurok thinks that Maiev’s level 10 and 20 Talent picks are her most variable ones and depend entirely on the team you’re facing—and what Battleground you’re facing them on. Much like Anub’arak’s Cocoon, Containment Disc is a solid way to shut down a single target if there’s one hero on the enemy team that you really want to get out of the fight for a few seconds while you focus on the rest. But unlike Anub’arak’s Cocoon, Containment Disc is a skillshot that only isolates the first target it hits, meaning there’s a much higher risk of messing it up.

“I think Warden’s Cage will be preferable for most people because it’s easier to get a lot of value out of it,” Nurok says. “If you catch two or three enemy heroes inside the circle, you can unleash a lot of Q attacks on them in quick succession. And even if you don’t catch that many enemies, it still acts as a good zoning tool—the enemies on the outside will still have to move around the whole thing.” 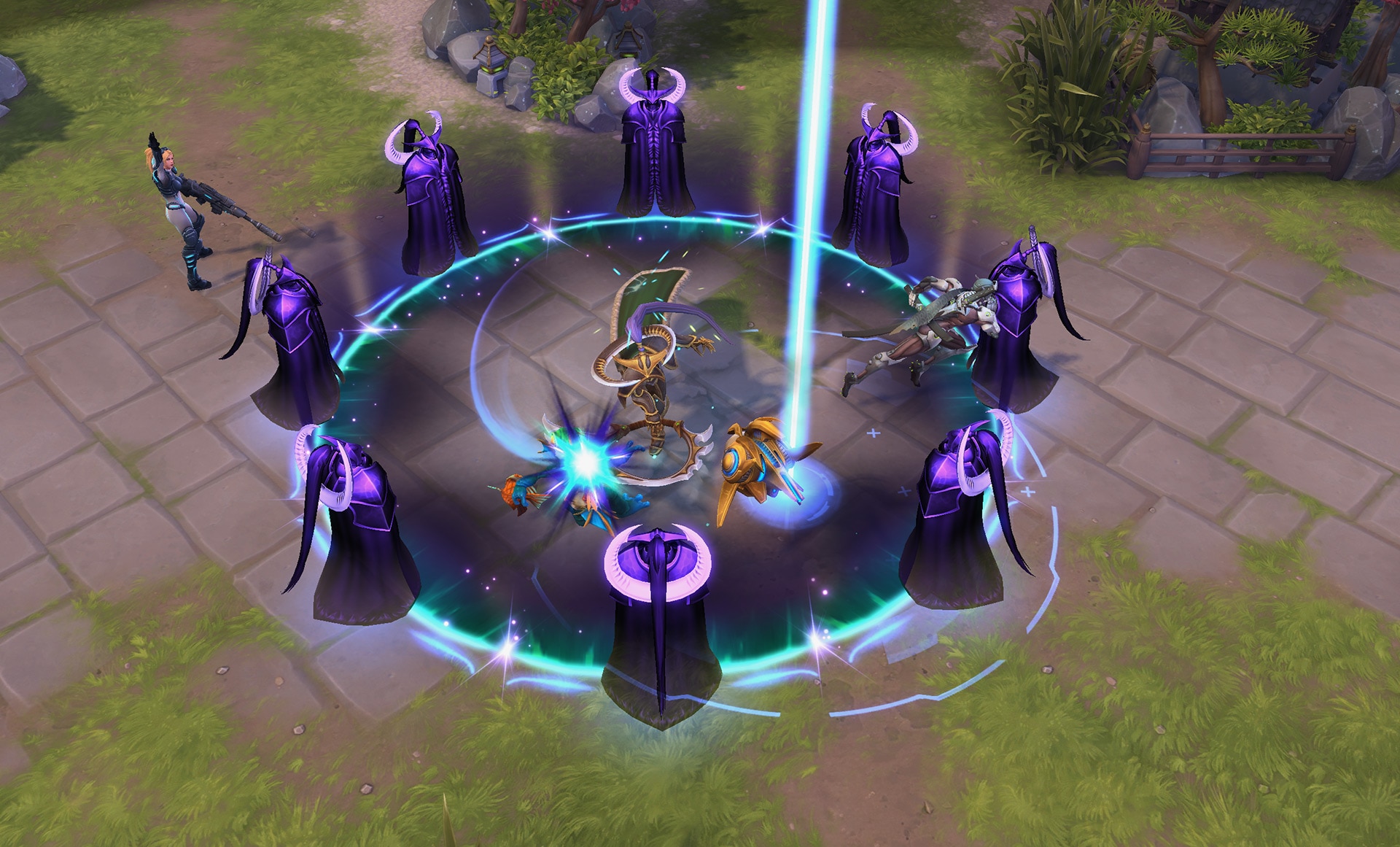 Since Maeiv excels when she’s dealing tons of damage to a group of bunched up enemy heroes, Nurok recommends taking her along with Warrior and Support heroes that offer additional crowd-control—"Anub’arak, Tyrael, Diablo, Muradin, anything that keeps people in a specific place is automatically good for Maiev.” While Supports like Malfurion and Stukov work well in that regard as well, he sees a particularly strong synergy with Uther because his passive grants armor to heroes he’s healed.

What wombo combos do you see yourself and your allies unleashing now that Maiev is live in Heroes of the Storm? Let us know in the comments, and we’ll see you in the Nexus!