This past week wrapped up both North America and Europe’s Regional Qualifiers, as eight teams from each region attempted to book their tickets to the Summer Global Championship! While we’ll have to wait for DreamHack Austin to find out the first Summer team from NA, the ESL Heroes of the Storm Regional - Leicester is coming up this weekend. Starting on April 22, England will become the battleground where the eight top European teams face off and one is eventually crowned the first qualifying team for the HGC Summer Finals in Sweden.

The Summer Circuit is well underway, and this week is particularly busy for several regions.

For more info please head over to Teamliquid and ESL.

In North America, six of the eight teams from the Spring Regional have returned to fight this summer. Previous BlizzCon and North American Champions Cloud9 are again joined by the likes of Tempo Storm, Team Naventic, COGnitive Gaming, and Panda Global, with King of Blades Alpha’s team returning as Gust or Bust. 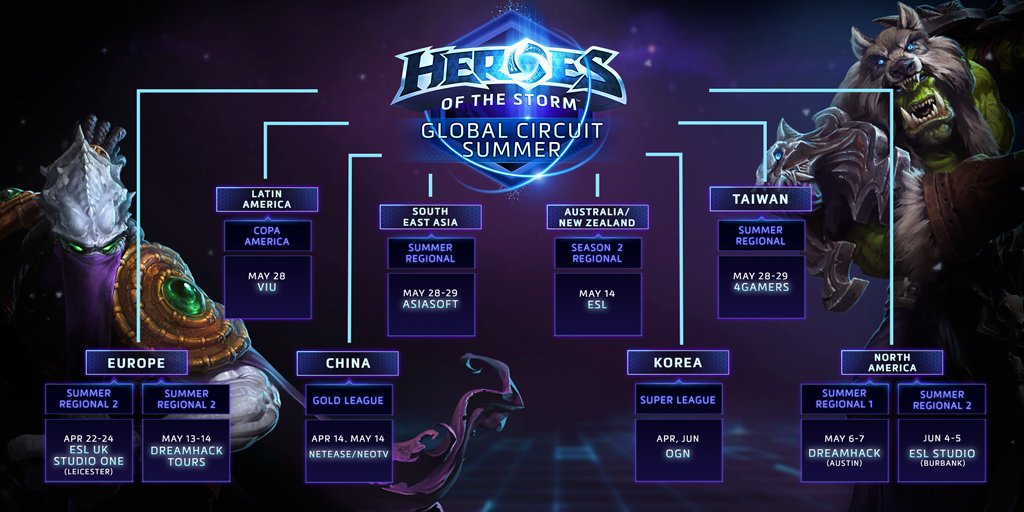 A similar situation played out in Europe, where five of the eight teams from Spring Circuit qualified for the Summer Regional. Following the reformation of major teams it has been a free agent zoo, and three new teams have decided to stake their claim on the European Championship crown: Polish team Silenced Monkeys; Casual Logic Gaming, replacing Epsilon eSports due to visa issues; and Team Sandwich Monkey, boasting previous members of Na’Vi and Team Dignitas. Here is the full list of qualifying teams:

It’s worth noting that both North America and Europe will have TWO Regional Qualifiers. Details about how teams will qualify for the Summer Global Championship, and what will happen in case of conflicting Regional results, can be found here!

Catch VODs of the first round of EU Qualifiers on Khaldor’s YouTube channel.

The excitement and upsets of Super League Season 2 have already put fans on the edge of their seats--and the group stages have yet to begin! From Season 1, MVP Black and Team No Limit were automatically seeded as the first and second place teams. After the online and offline qualifiers, their six competitors have been decided. DsA, a reincarnation of Team AsD, also qualified and contributed to one of the biggest upsets thus far. Team HERO, the third place team in Season 1, fell to DsA in a convincing manner, truly showing the growth of the scene. Unsurprisingly, RAVE HOTS qualified once again but knocked out up-and-coming Team Villain in the process, creating yet another upset in the Korean scene. Tempest, a team comprised of incredibly strong free agents, qualified alongside RoMg, Team Mighty and TAS.

Watch Season 2 of the Heroes of the Storm Super League on OGNGlobal’s channel on Twitch.tv, cast in English.

The first two Regional events are upon us, with more coming our way! Check below to find out when and where the action will happen!

For more info on the Heroes of the Storm Summer Global Championship, including a full schedule of events across all regions, check out our primer.