Play Diablo III and Reap the Benefits in the Nexus

After teaming up with World of Warcraft and Hearthstone to provide you with epic in-game rewards, we’ve decided to brave the dangerous landscape of Sanctuary to bring exciting new goodies to Diablo III players who venture into the Nexus. 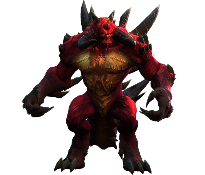 Immediately following the next Heroes patch, any player who owns Diablo III will permanently receive the Diablo Hero in Heroes of the Storm for free after logging into Heroes of the Storm. This promotion will only last until 19:00 CEST on September 8, so be sure to keep your eyes on the official Heroes of the Storm website to make sure you don’t miss the chance to claim the Lord of Terror for your Hero collection!

As a reminder, dedicated World of Warcraft and Hearthstone players are also eligible to earn sweet in-game items in Heroes of the Storm. For more information on how you can get your hands on the Hearthstone Card and the Ironside Direwolf mount, click the images below.

New to Heroes of the Storm? You can download the game here. Good luck, and we’ll see you in the Nexus!