The game is afoot! You can now start your investigation into the Murder at Castle Nathria, now live worldwide with 135 new collectible cards, the new Location card type, the new Infuse keyword, and more!

Locations are an all-new card type that will be permanently added to Hearthstone with the Murder at Castle Nathria expansion. Locations are played onto the board for an initial cost, like minions, but can’t be damaged or destroyed except by cards that are specifically able to target them. Locations have activatable effects that you can use on your turns. But you have to be strategic with your choice! Each time you use a Location’s effect, it loses one Durability and then can’t be used again for the rest of that turn or your next turn. Each class has a Location in Murder at Castle Nathria that represents a potential scene of the crime—or alibi.

Ten mischievous malcontents were present when the murder took place. Now each class has a Legendary minion card representing one of the suspicious suspects. Explore their powerful synergies while you get to the bottom of who did the deed!

Murloc Holmes is on the case! Solve three mysteries of your opponent’s hand and deck to get copies of their cards. Get the special Diamond version of Murloc Holmes with the Murder at Castle Nathria Tavern Pass. 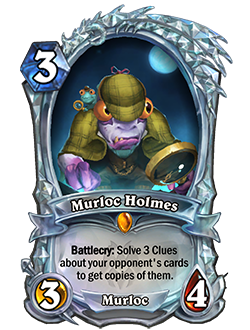 What’s the motivation for the murder? Anima! The magical energy is extracted from wayward souls and used to power the Shadowlands. Cards with the Infuse keyword absorb anima whenever friendly minions die while the Infuse card is in your hand. Once the specified number of friendly minions die, the Infuse card is Infused with anima and transformed into a more powerful version! You’ll have to choose whether you’ll play your cards right away for an immediate effect or wait until they’re Infused and even stronger! 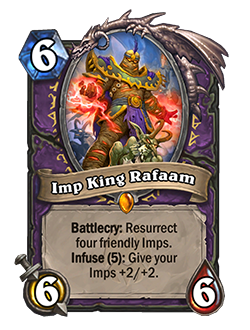 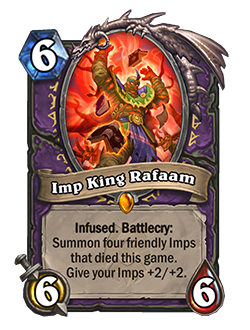 Check out the 24.0 Patch Notes and the official Card Library for more information about Murder at Castle Nathria and everything else that’s in this patch!