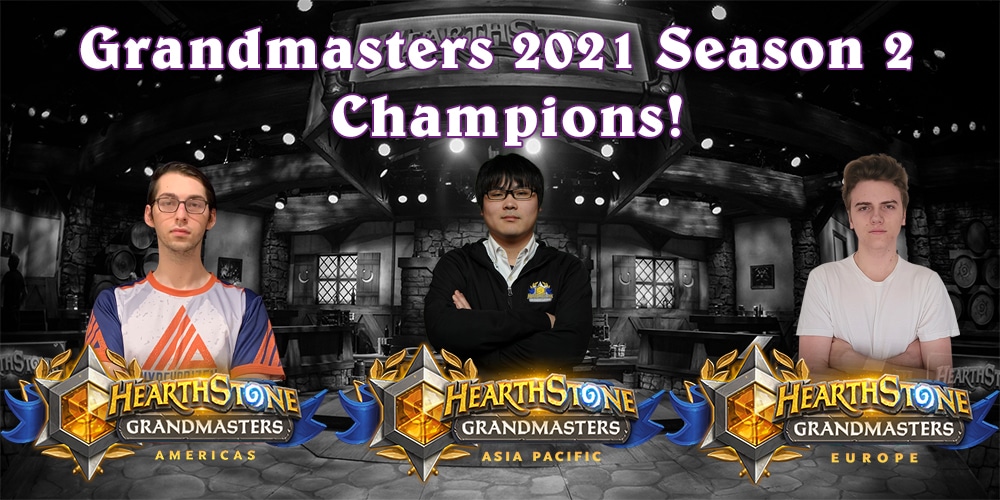 In Americas, McBanterFace sneaked into the Playoffs in eighth place in his very first season of Grandmasters. On his path to victory, he quickly bested lnguagehackr and Monsanto 3-0 each. In the semifinal, he pulled off a reverse sweep against Season 1 champion Nalguidan before facing off against muzzy in the Final. Trading games, McBanterFace took the win after an intense 3-2 match. As the new kid on the block, McBanterFace will have a lot against him in the World Championship but his triumph in Season 2 shows that he has the skills to claim victory and compete for a spot in the Hall of Champions!

In Asia-Pacific, glory entered the Playoffs at sixth place and had to play at the best of his ability to claim his repeat spot at the World Championship. Following a clean sweep against GivePLZ, he struggled to claim victories against Alutemu and then Posesi. In the final match, he faced off against AlanC86 and claimed the first game before giving up game two to AlanC86’s Hunter. But glory was able to rally back and secure wins in games three and four to secure the APAC championship. The 2020 World Champion now has a chance to reaffirm his spot in the Hall of Champions when he advanced to the 2021 World Championship!

In Europe, Gaby dominated the Top 8 pool to silence all doubts that he is one of the top players in the world. Not only did he start the Playoffs in first place, but he had claimed total victory in three of the seven Season 2 weekend tournaments. Following his 3-2 defeat of Bunnyhoppor in the Winners Match, Gaby quickly took down Season 1 EU Champion Frenetic 3-1 in the Semifinal and then Jarla 3-1 in the Final. The 15-year-old Wunderkind from France quickly stormed the competitive scene with his Ladder domination in 2020 and has not let up, heading to the 2021 World Championship as arguably the best player in all of Europe and still in the early days of his professional Hearthstone career.

Congratulations to McBanterFace, Gaby, and glory! They will join Facundo “Nalguidan” Nahuel Pruzzo, Wataru “Posesi” Ishibashi, David “Frenetic” Neila Quiñones, and Huang “KZGXiaobai” Dehui at the 2021 World Championship December 18-19. The final Chinese competitor will be decided in early November, but before then there is a ton of incredible Hearthstone Esports action to catch when Masters Tour Stormwind goes live October 22-24, only on YouTube. We’ll see you in the Tavern!