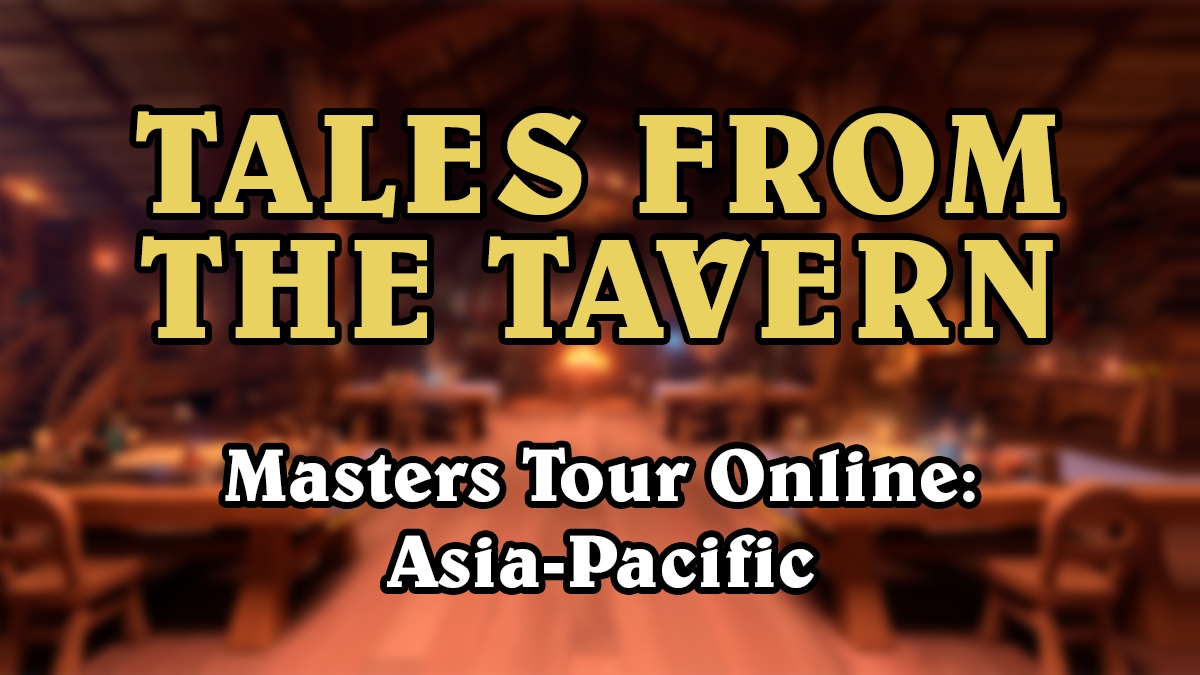 With more than three hundred different players to keep an eye on, following Masters Tour events can be a blur of names. There are many regulars on the Tour, and some of those regulars will be future Grandmasters. There are also players who qualify for their one shot. It is this mix of players that makes the Masters Tour so exciting to watch.

Although Grandmasters also play in the Masters Tour, I’m going to introduce you to regular players who have incredible stories you may not be familiar with, all of which you should keep an eye on. 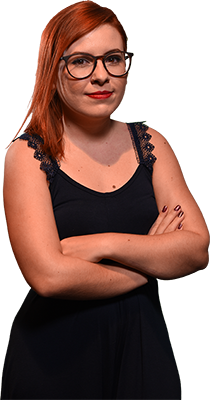 Nayara “NaySyl” Sylvestre started playing Hearthstone in 2015 when her friends all started to compete. She was the only one who did not know anything about the game, so she started to play casually so she could join in on their conversations. She immediately took to Hearthstone and started to play for “hours and hours”.

At the time, she was running a struggling lawyer’s office, and in 2016, she closed the office and began to work from home. She started going to Fireside Gatherings and her friends encouraged her to begin streaming Hearthstone. During one of her streams, an admin from an amateur league was watching and invited her to cast the league he was running.

The cast went well, which led to Blizzard contacting NaySyl in 2017 to cast Copa America, a big LatAM competition which later became a part of the Hearthstone Championship Tour. Around this time, she also began to compete more—she placed in the top 8 of WESG Americas and was invited to play in WSOE. It was this invite that made her realise that people outside of Brazil were starting to know who she was.

Her next big tournament was the Wild Open, where she finished 17th. She then heard about the schedule for 2019 and began the search for a team to help with travel costs. It was at this point she joined Bazar Gaming, who she still represents today. After qualifying for Masters Tour Las Vegas, NaySyl made the ambitious decision to try to qualify for every Masters Tour event—a decision that has worked out well, as she has qualified for every single one so far.

She notes that competing at this level has been a challenge, and has changed her caster perspective to have more empathy with the players. Her voice skills have also led to her doing the voice lines (in Portuguese) for Illidari Felblade. She has been working hard on her English too, so hopefully we will get to hear her give her views in English on stream, or cast in her own words at some point in the future! 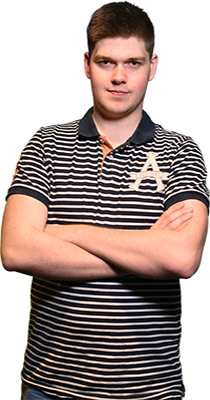 Denmark has always been a strong Hearthstone region. Simon “Crane” Raunholst and the Hoej twins were the first to become well known in the game, but in 2018 we saw the rise of the Danish Pirate Boizz—a group of players, including Frederik “Furyhunter” Møller, who scored several high ladder finishes using Pirate Warrior.

Furyhunter was the first player from the Danish Pirate Boizz to take a big title, when he won DreamHack Summer in 2018. He is also the reigning Hearthstone Global Games Champion, which he won for Denmark in partnership with Frederik “FreddyB” Bohé, solidifying his place in the top tier of non-GM players.

His performances in Masters Tour events so far have been the definition of consistent—or at least they were, until he alerted everyone to this fact in a tweet before Masters Tour Online: Jönköping. 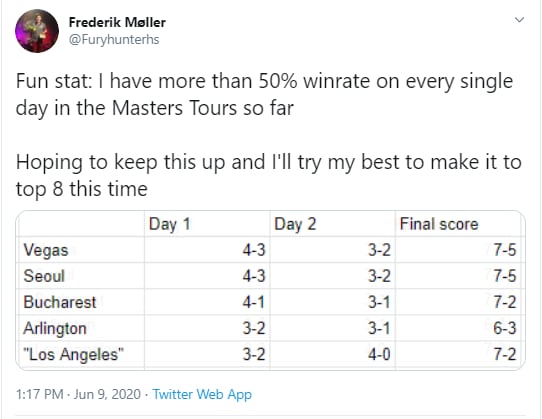 Of course, he went 2-3 on day one of Jönköping, because we all know that’s how these things work.

Joking aside, however, his record of 36-20 in Masters Tour events means that he is in the top ten players by match wins with an excellent 64% Match Win Rate. 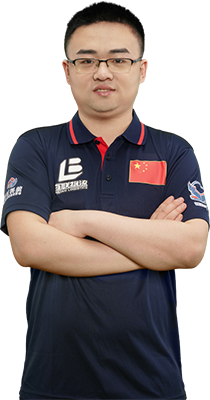 One of the positives to come from having the Masters Tour events online has been the extra opportunity to watch Chinese players in action. One player that has not gained much exposure at this time is Yang “VK.xhx” He from Team VK—the same team as our Global Champion, Li “Liooon” Xiaomeng.

Even though the champion is on their team, VK are still a relatively new organization that take in young and promising players. Before this year, VK.xhx had one top-four finish in a Gold Open and not much else to his name.

This year, though, he has started to make a name for himself in the Gold Team Championship (the Chinese route to the World Championships). In the first week of that event, he defeated Raphael “Bunnyhoppor” Peltzer 3-0 to announce his arrival, but it was during Week Four that he had his breakout performance. In a Last Hero Standing rematch with Bunnyhoppor, both players brought Priest. Bunnyhoppor is famous for his slow play, and it was always likely to be a long match. However, it is unlikely that anyone guessed quite how long the match would go. Despite being 0-2 down, VK.xhx matched Bunnyhoppor blow for blow and ended up winning that match 3-2.

That incredible result isn’t the only part of the story, though. The match contained three hours of gameplay—that’s not including the time for breaks between games and so on. To take on Bunnyhoppor at his own speed and style and emerge on top should give VK.xhx plenty of confidence to show off his skills on the world stage. 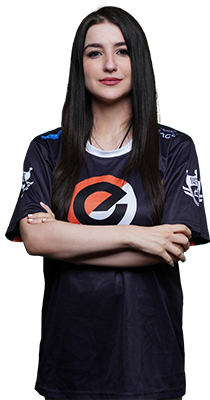 These results only served to make her more determined. She took her ladder position of around 400 at the time, and threw herself into trying to get the top 16 May ladder finish required for a ladder invite. Despite having under half of the month to get her rank into shape, she reached 14th place (largely with Priest) and secured her invite.

Encouraged by her own performance, she decided to try the ladder route again in June—this time, to qualify for Masters Tour Online: Montreal. With a full run at the month, she qualified with ease and finished in 8th place.

On July 8, with the need to finish top 16 no longer pressing, she reached Rank 1 Legend—again, with Priest—on the European ladder. In her tweet, she challenged some of the other regular top players to come and try take to it from her. After the Masters Tour, it looks like there will be some serious rivalries to follow on ladder at the end of this month! 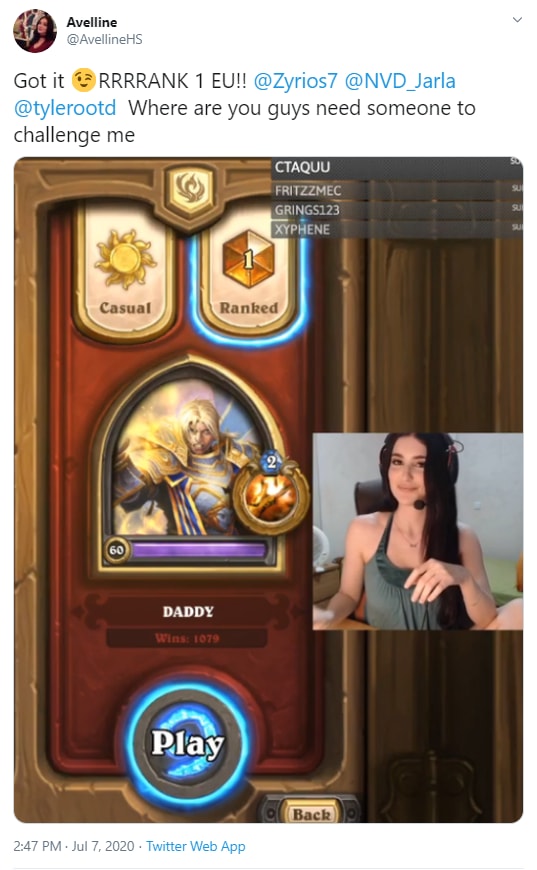 The French have taken every European promotion spot to date, and this entire article could have easily been about them alone. On this occasion, though, I’m merely going to point out that you should keep an eye on regular Rank 1 Legend Gabriel “Gaby” Jeanne, and the perennial challenger for a Grandmasters spot, Maxime “Kalaxz” Thierry. Raise your baguettes!

Masters Tour Online: Asia-Pacific starts this weekend! The broadcast will be live on July 16 at 5:00 p.m. PDT on YouTube.com/HearthstoneEsports!