As the Year of the Mammoth lumbers off into the sunset, it’s time to find out who will hoist the trophy at the Hearthstone Championship Tour (HCT) World Championship in Amsterdam. Alongside the Choose Your Champion promotion, we’re excited to share all 16 players’ highly optimized deck lists, and a little bit of a sneak peek at what’s in store for the tournament next week.

The HCT World Championship will be played in Conquest format, best-of-five matches, requiring each player to ban a single class out of their opponent’s line-up—so every player has four decks coming in, and plays three per match. Here’s everything you need to know about the field of play for the biggest competitive Hearthstone event of the year.

Seven classes will see play in Amsterdam, with Shaman and Warrior not making the cut for any of the world’s top competitors in this event. In total, 13 different archetypes span the seven classes, but the core of the tournament will focus primarily on four classes: Priest, Druid, Warlock, and Rogue.

In the post-Kobolds & Catacombs era, pro play has been heavily influenced by the presence of “Cube” Warlock—a deck focused on utilizing the all-new Carnivorous Cube to either aggressively populate the board with Doomguards, or hunker down behind a wall of Voidlords. The versatility of the deck and its ability to survive against a wide variety of both fast and slow decks has kept HCT Summer’s preeminent choice present: Priest is the class best positioned to counter the various Control and Cube Warlocks.

Warlock and Priest will be met in battle by the ever-reliable Tempo Rogue, which is the most-played single archetype in the field (but only because there are two distinct flavors—standard and Dragon—of Highlander Priest). While it struggles against the major stabilization that Control Warlock is capable of, Tempo Rogue’s explosive opening potential continues to make it a very viable choice. Rounding out the bulk of players’ rosters is their Druid of choice: Aggro or Jade. (The most-played single line-up of Aggro Druid, Highlander Priest, Tempo Rogue, and Control Warlock will be fielded by three players.)

Here’s an at-a-glance look at how the class selections break down by the regions players hail from: 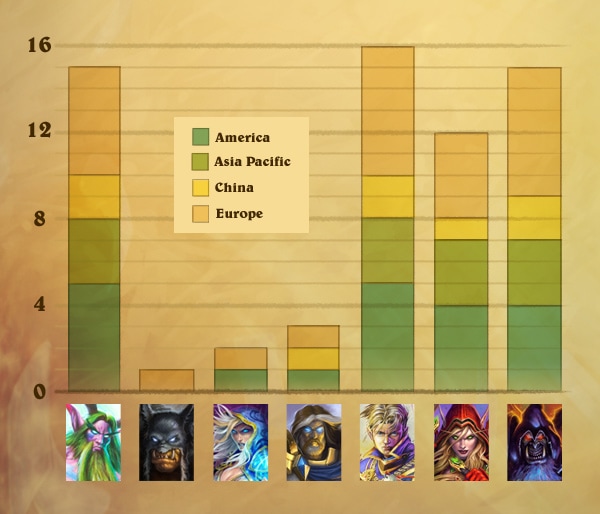 For those of you looking for the off-meta selections, you have Jon “Orange” Westberg to thank for the tournament’s biggest surprise: a single Aggro Hunter. With the potential to open aggressively enough to beat most anything and the reach to ignore the Great Wall of Voidlords from Warlock, it’s an interesting strategic direction—and in the absence of much Paladin, it could just work.

Mage and Paladin are the other underrepresented classes, with two players looking to Control Mage to defeat aggro line-ups and three players banking on Murloc Paladin to be their silver bullet against Priest. Within the common classes, there are also outliers: a lone Big Spell Priest from Anthony “Ant” Trevino or the only Dragon Combo Priest from Thomas “Sintolol” Zimmer stand apart, as does the one Zoo deck in Samuel “SamuelTsao” Tsao’s choices.

From what we know, players arrived at their lineups working from two very important assumptions: that both Priest and Warlock would feature heavily in the tournament overall. With 16 players packing Priest and 15 wielding Warlock, that turns out to have been a pretty good prediction!

Working from that knowledge, a conservative line of strategy is to ban one of these two must-bring decks, and then position your remaining decks to have the strongest possible matchups against what you believe will fill those remaining two slots. Multiple decks running anti-aggro tools (Golakka Crawler, etc.) suggests that players expected aggressive Druid, Paladin, or Rogue lists, and have focused on improving those matchups at the expense of targeting the difficult-to-isolate Priest or Warlock.

Most competitors will ban whichever of their opponent’s Priest or Warlock list is most difficult to beat, with the majority likely erring towards Priest. Those with the tools to contest Raza and Shadowreaper Anduin more efficiently—using decks like Jade Druid—will be the few to forgo playing against Gul’dan.

Broadly speaking, there are fewer edge-case tech cards in play here, as players are laser-focused on bringing heavily refined decks and playing with the full suite of cards available for this Standard rotation. There are a few unsurprising tech cards making appearances, like Rin, the First Disciple in several Control Warlock decks. But occasional interesting inclusions do exist: Sonya Shadowdancer made it into Jason “JasonZhou” Zhou and Muzahidul “Muzzy” Islam’s Tempo Rogues, for example. 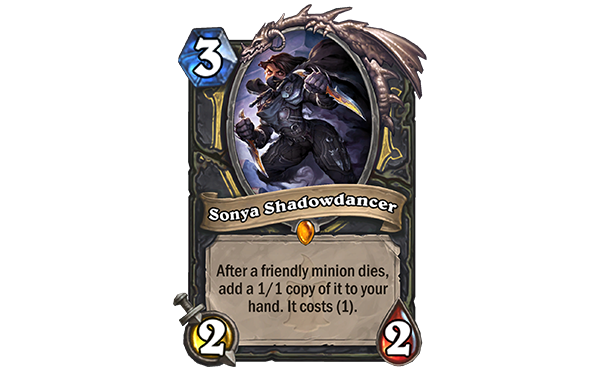 Additionally, Frank “Fr0zen” Zhang has elected to contest the board with Violet Teachers and Mark of the Lotus in his Jade Druid. There are more minor variances, such as the inclusion or exclusion of Spiritsinger Umbra in Cube Warlock or the choice between Lyra the Sunshard or Gadgetzan Auctioneer in Highlander Priest, but those don’t stand out quite as much.

The stakes are incredibly high for these 16 players, and these are the deck lists they’ve chosen to battle with for the title of World Champion—and the $1,000,000 grand prize. Peruse every deck list below, then grab your favorites to play for yourself!

Whose decks do you trust to win the day for Choose Your Champion? Are there any decks here that surprised you? Let us know in the comments, or on Facebook or Twitter using #HCT.