Since this timeless classic was resurrected, daring heroes have diligently decimated ranks of hell-raising demons across all five acts of Diablo II: Resurrected, forever loosening the Lord of Terror’s hold on Sanctuary.

In Patch 2.4.3., which goes live on June 29, we introduce a variety of new features and improvements set to elevate multiplayer lobbies for console and PC. Accompanying these new features are quality-of-life improvements and bug fixes. Partying up with like-minded demon slayers is a cornerstone of the Diablo experience. Because of this, we‘ve been closely monitoring your feedback around multiplayer lobbies, and the changes highlighted below are a direct result of this. Sanctuary wasn’t built in a day—while we have made great strides in refining various aspects of Diablo II: Resurrected, we are dedicated to enhancing your pursuit of the Dark Wanderer even further. As always, we want to make the flames of this beloved classic burn hotter and brighter than ever before and invite your feedback to help aid us in this communal effort.

Now, make ready, hero of Sanctuary! You will need the knowledge below to topple the demons that lie in wait.

One common issue among players is that their Game List did not populate with enough games, even when they felt it should have. When you create a game in D2R, it gets hosted on one of many game sites in your region. Prior to ladder's launch, the Game List would only populate with games from just one single game site in your region—whichever you had the best connection to. This was done to preserve a high-quality gameplay experience in any game you may join through the lobby, but we found our criteria to be overly aggressive. When ladder launched, we expanded this to provide players games from up to three game sites. This helped players see more games in their Game List without a cost to connection quality, but players still weren't seeing enough games. We've decided to broaden it even further in Patch 2.4.3. Now, any number of game sites in your region that you have a strong enough connection to can contribute to the results in your Game List. To provide even more options for those looking to join a game, we've also doubled the maximum number of games that can appear in the Game List at a given time from 20 to 40. Plus, we've fine-tuned game details to refresh in almost real time. You still must manually refresh your Game List, which is something we decided to keep so the Game List would not shift while players select a game. These improvements have been applied to both the console and PC lobby experiences.

Following the successful launch of Ladder Season One, the team has turned their focus to features that required the most attention. Console Party Finder was the top item on our list by a large margin. Patch 2.4.3. brings multiple improvements to the console multiplayer experience, providing new and improved ways to create and find games by replacing Party Finder with Game Creator and Game List.

Three Options Lie Before You 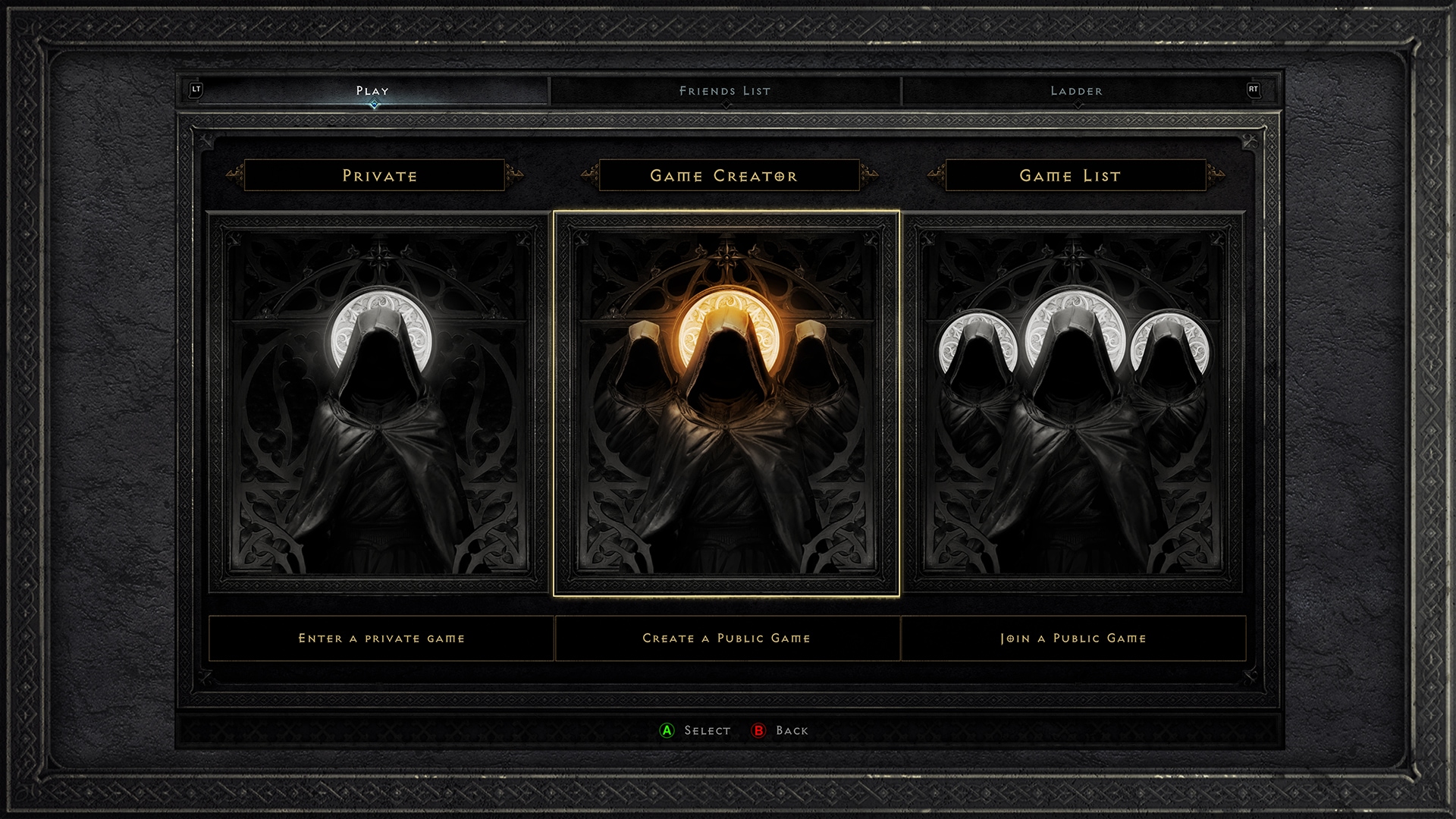 Selecting the “Play” button on the main menu with your selected online hero will now present three options for online play:

Private: Enter a private game that will not populate to the Game List. The only way for others to join your game is through the Friends List or by being invited.

Game Creator: Create a public game that will populate on the games list. 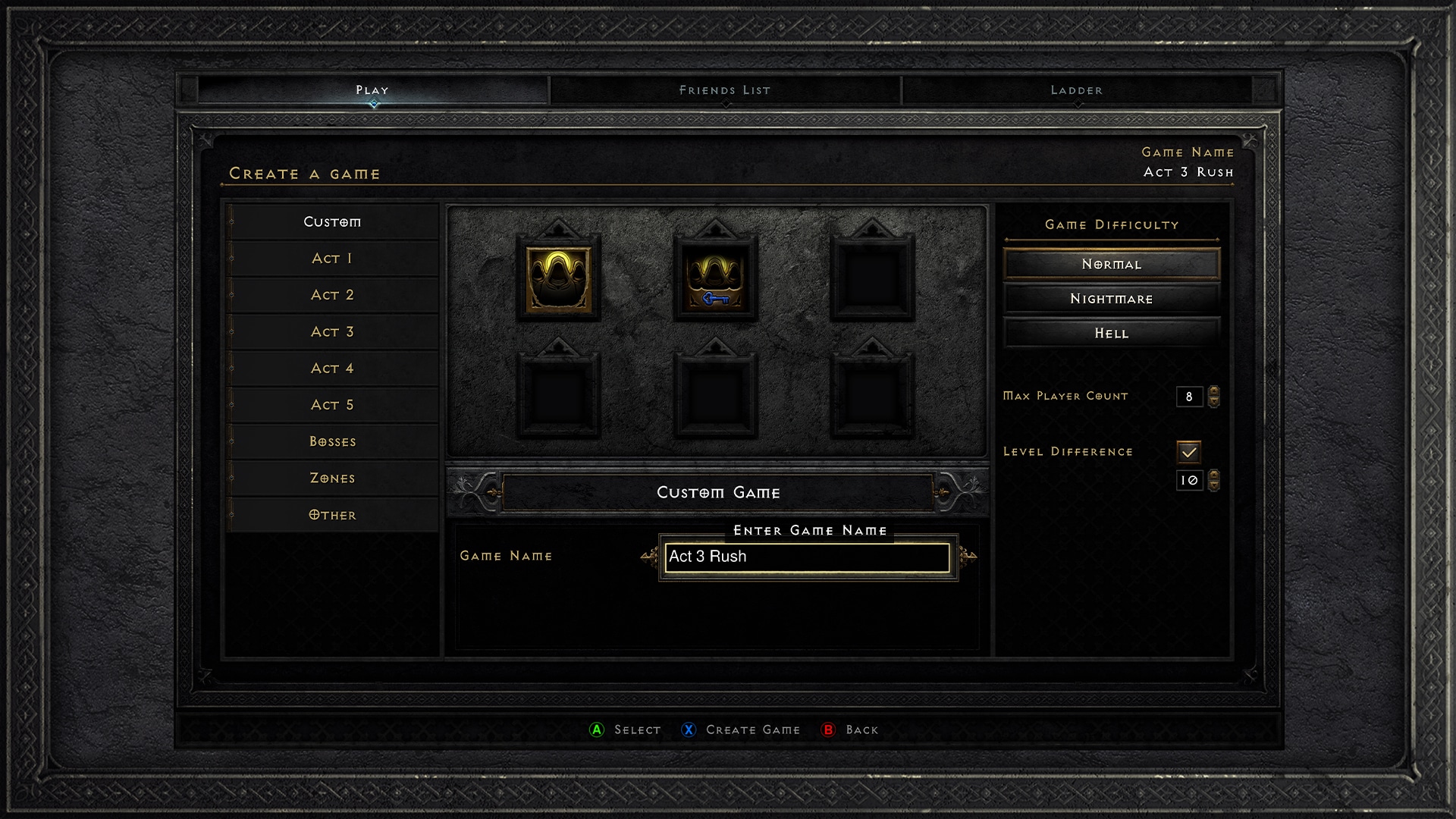 Game Creator will equip you with the ability to quickly create the type of game you desire. To aid you in doing so, all previous game categories that were available in Party Finder have returned in the Game Creator. Selecting and confirming one of these game categories will generate a pre-made name for your game, accompanied by an assigned number—this is to prevent games with duplicate names from being created. Level Difference, which was previously only available as a Game Creation option for PC players, has been added as a game creation option.

Public Game: Create a public game to populate in the games list with a name of your choice.

Password-Protected Game: Create a public game with a password that must be entered to join. Just like in the PC lobby, a password-protected game will not appear in the games list but can be joined through a separate “Join Game” button found by pressing the “Search Game Name” button on the Game List menu and going to the Custom category.

A preview of your Custom or generated game name is displayed on the top-right portion of your screen. Once you are comfortable with your selections and confirm them, your journey to Sanctuary can begin. 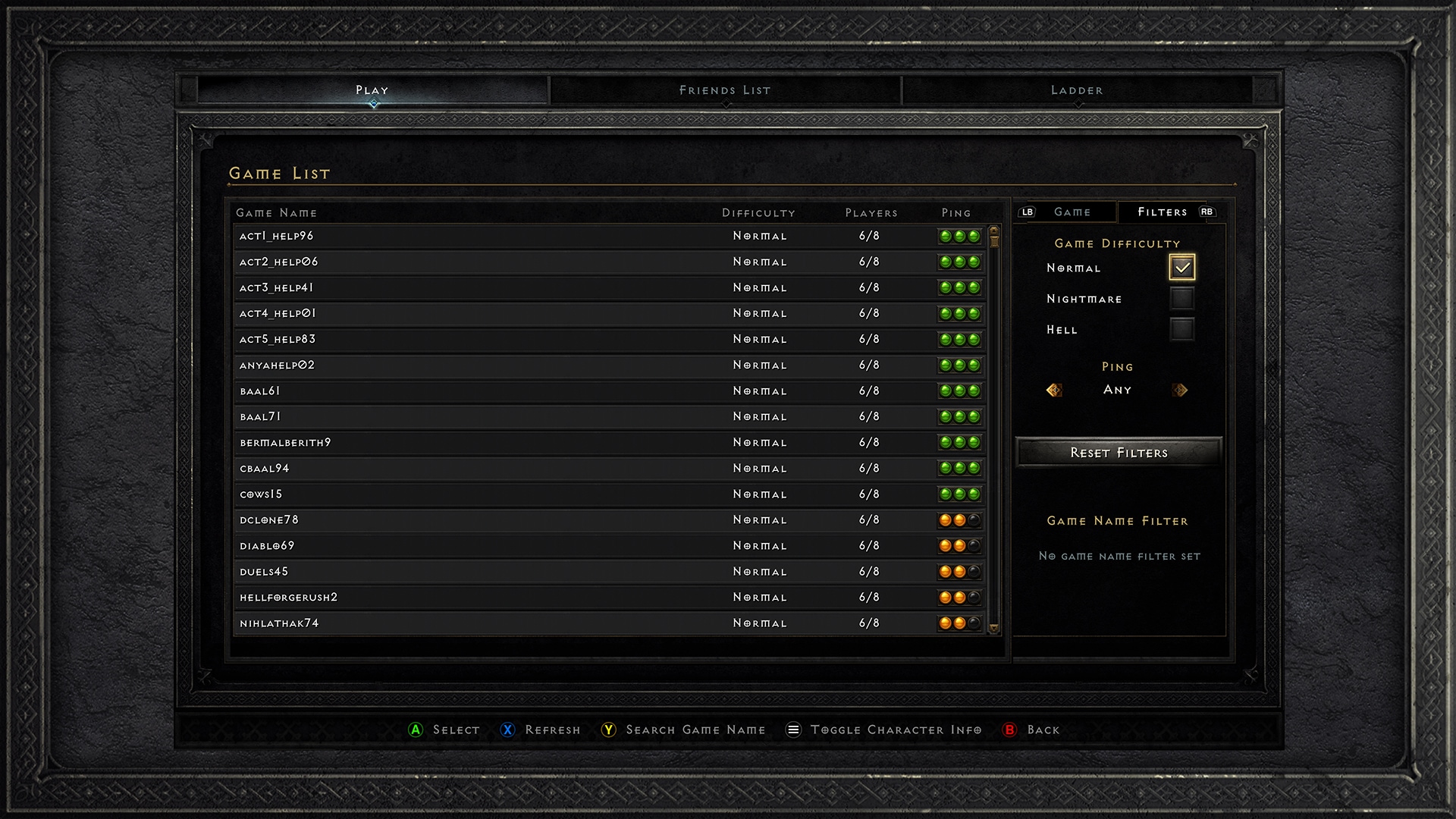 Selecting the “Game List” button will display up to 40 matching games created by other players that your selected character is able to join. To aid in finding specific games, you can use the search feature to locate a specific game or filter games displayed using keywords. Within the filtering options you can set the following parameters:

Difficulty: Filter to display only Normal, Nightmare, Hell, or any combination of the three options.

Ping: Restrict your results to only display games of a particular connection quality or better.

Game Name: Pressing the Triangle button on a PlayStation controller, Y button on an Xbox controller, or X button on a Nintendo Switch controller while on the Game List menu will open the Search Game Name menu. Here, you can search for both Custom and pre-made game names using the same familiar layout you would use during Game Creation. Searching for a game name using the Custom category will only return game results that were created using the Custom category. Searching using one of our pre-made categories will only return game results that were created using that same pre-made category. For example, selecting the pre-made Den of Evil search option will only yield pre-made game results. Inversely, searching “Den of Evil” under the Custom category will yield Custom game names with those phrases within them. Custom games, with or without a password, can be joined directly through the Search Game Name menu.

Modifying any of these filters will refresh your list of games and return a new list of games (up to 40) based on the criteria you selected. Players also have a refresh button available to them to manually refresh the list at any time. 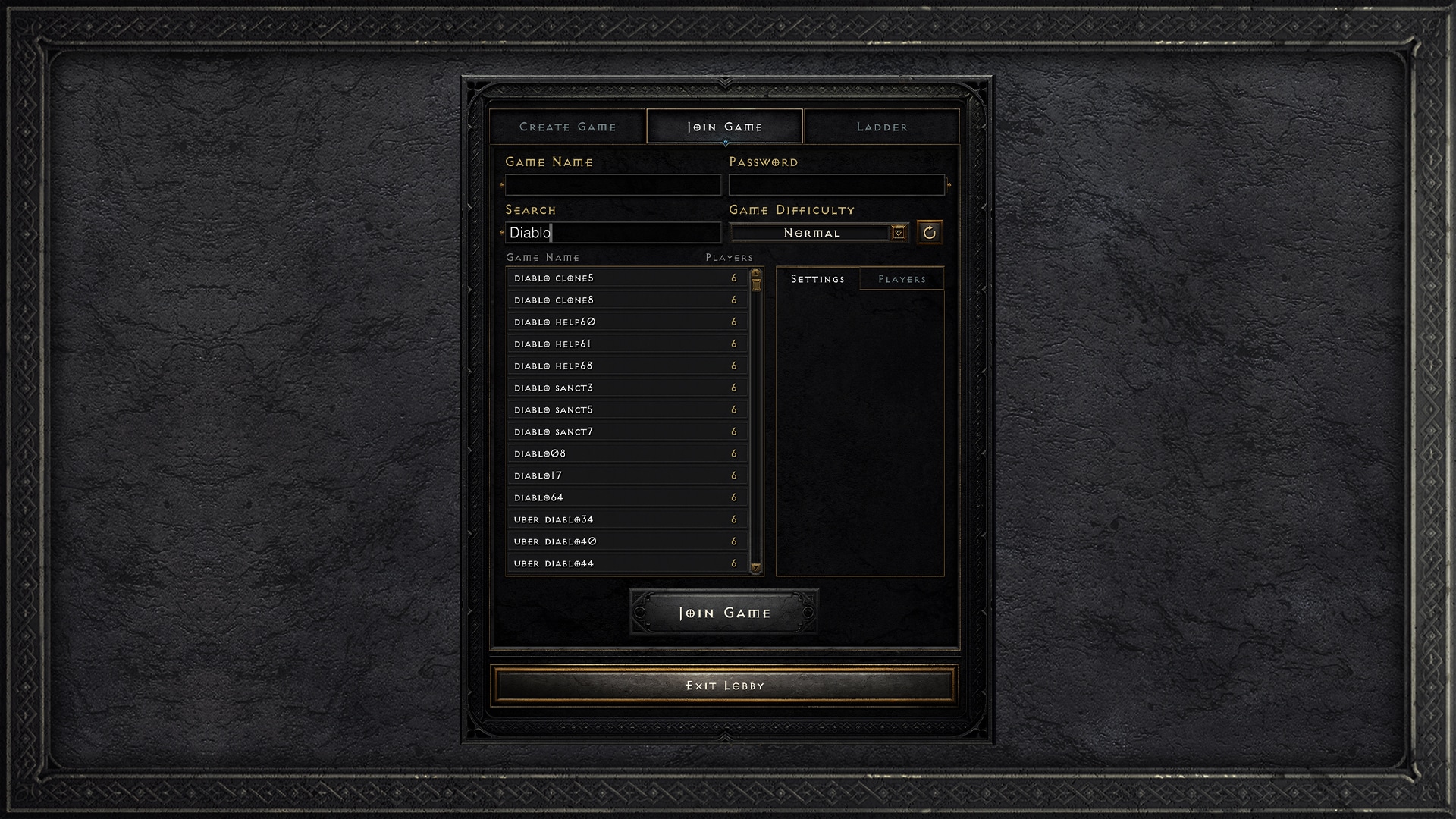 We want Multiplayer lobbies to be the bridge to many hours of slaying demons, collecting loot, and memorable moments with friends. Unfortunately, many players have experienced difficulties in finding specific types of games they would like to join. To solve this, we added a search functionality in the lobby—specific keywords or game names can now be typed in to return a list of games based on that search term.

We cannot stress enough how appreciated and crucial your feedback is. We’re always looking for opportunities to iterate or reshape aspects of Diablo II: Resurrected so your trip to Sanctuary continues to be memorable. 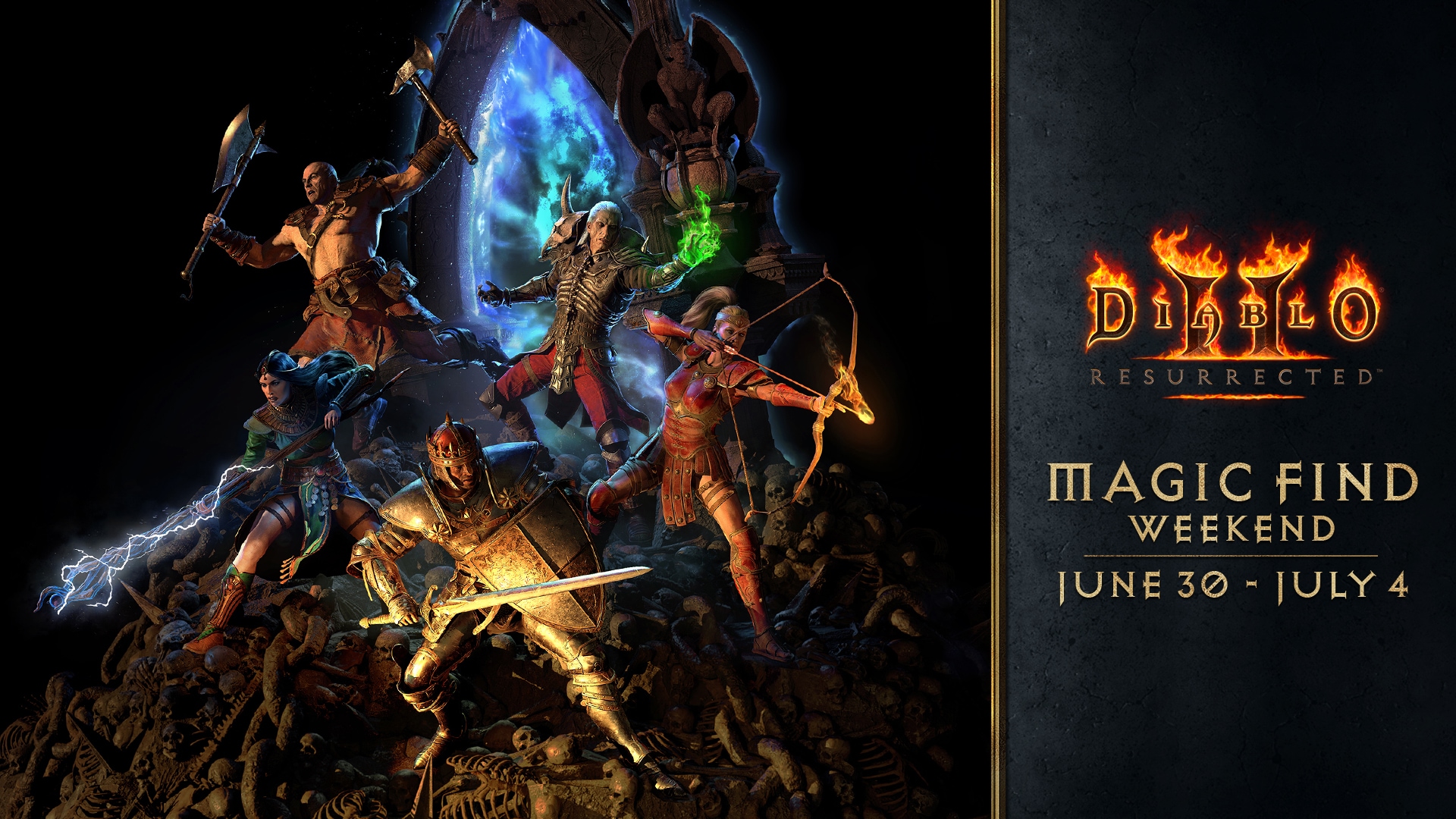 You feel an intense rush of energy coursing through your veins, a faint internal humming overriding your own pulse. From June 30–July 4, a mysterious energy source will grant you a 50% buff to Magic Find, providing an increased chance to receive Magic, Rare, Set, or Unique loot as a drop from slain foes. This bonus stacks with any additional increases to Magic Find provided by your items.

Our team is immensely grateful for your support. As we launch with all the 2.4.3 content, we hope to continue to hear from all of you! If you want to learn more about Diablo II: Resurrected, check out our website here, or for real-time updates, follow our official Twitter @Diablo.