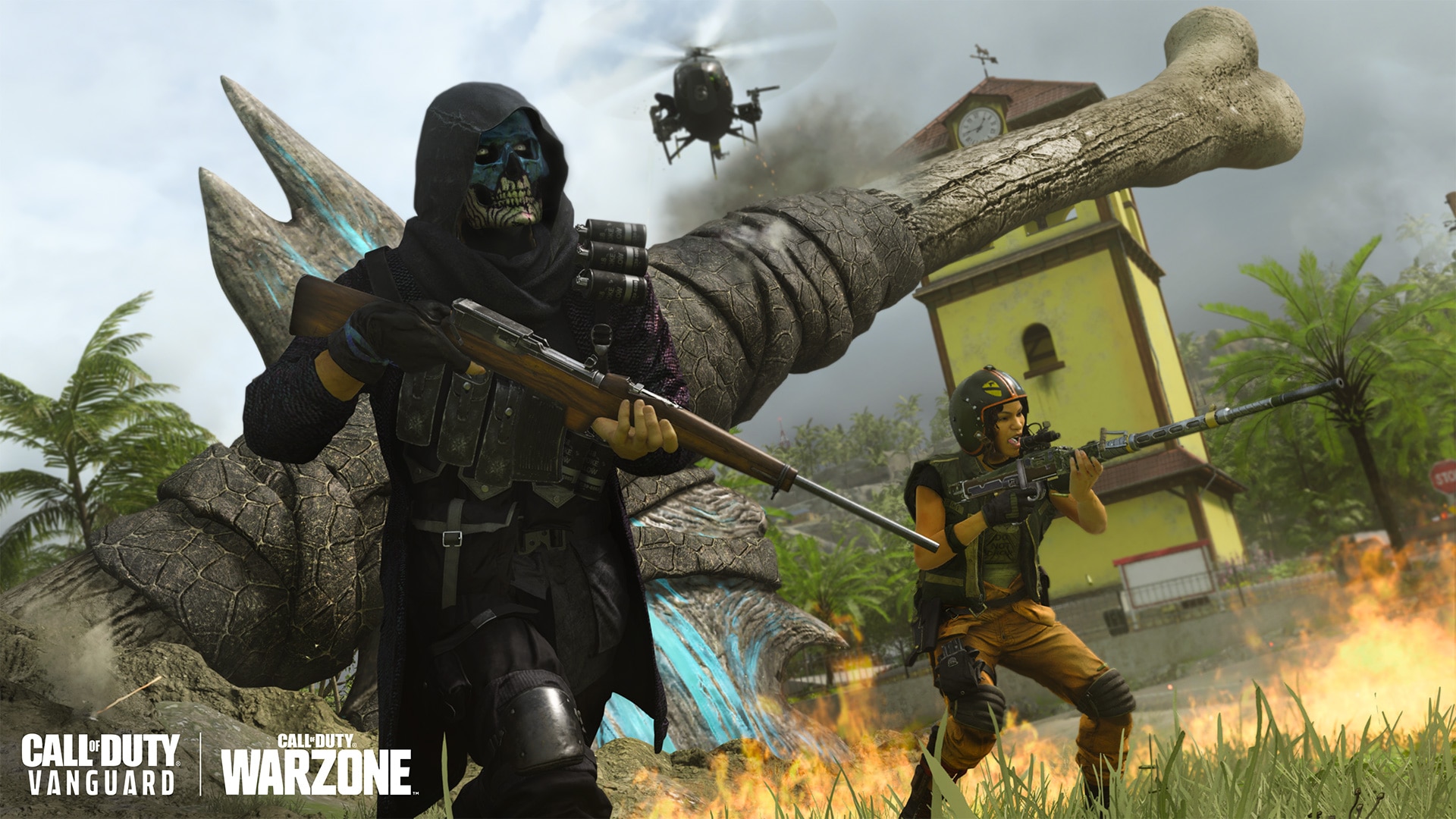 Call of Duty®: Vanguard and Warzone Classified Arms will equip you with prototypical weaponry of titan-like power. But when it comes to warfare – especially a Battle Royale on Caldera – there is no greater weapon than intel.

At launch, the Classified Arms update will bring a new Point of Interest, updates to several other areas, a new Gulag, a new Contract, and several additions to an updated item pool.

And that’s just the tip of the spear. Those looking to know all the changes coming with Season Three should look forward to Raven Software’s Patch Notes, which will include developer commentary on quality-of-life updates and balance notes.

Here’s what you need to know before you drop into Caldera in Season Three, presented by Raven Software, Toys for Bob, and High Moon Studios: 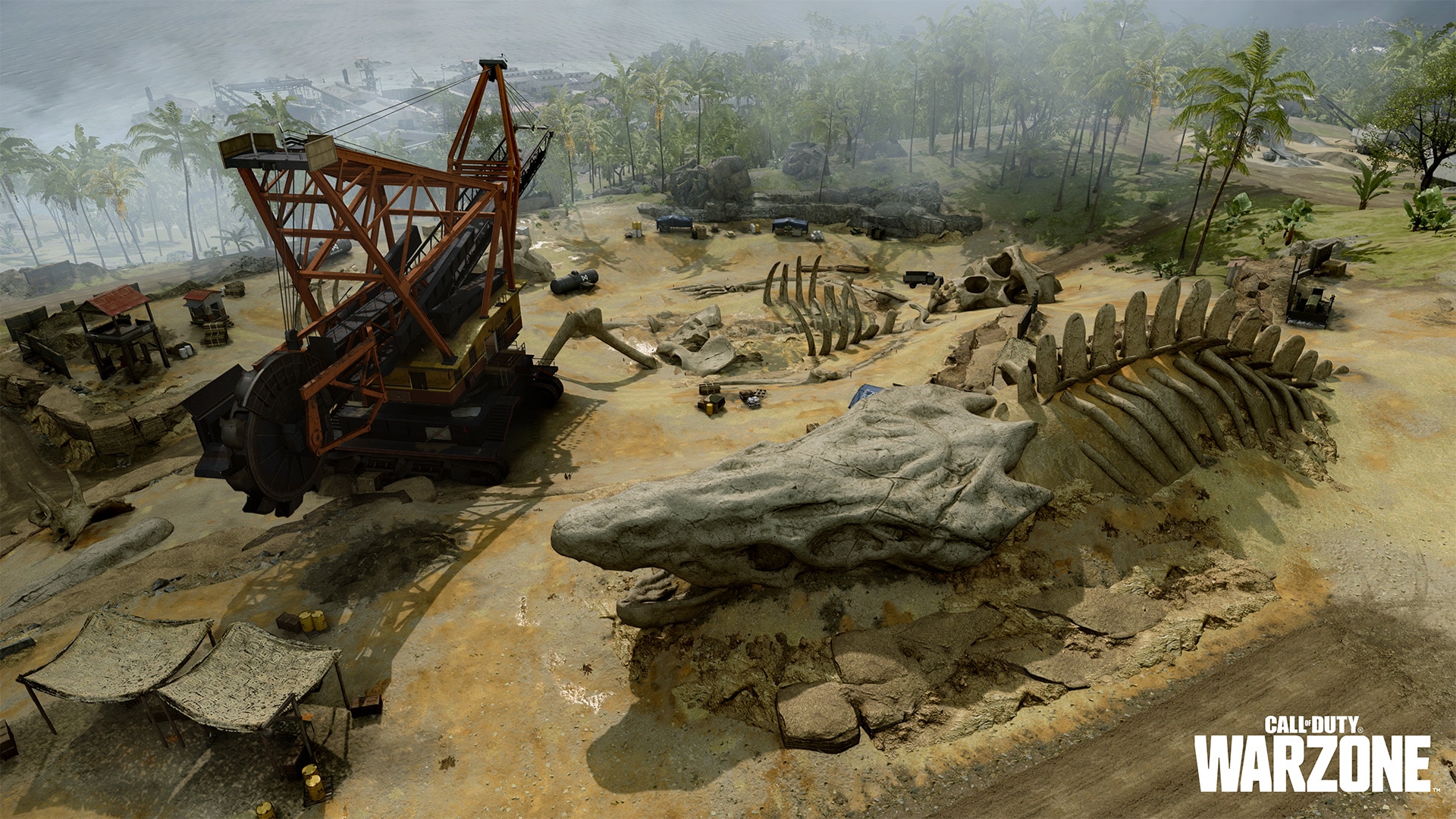 Located between the Mine and the Ruins, Dig Site provides Operators the opportunity to rummage through abandoned excavation equipment, tents, and massive skeletons for Supply Boxes and other items.

Other than the bones of creatures unlike anything from this world, the Dig Site’s primary points of intrigue are two machines with massive conveyer belts. Set across from the skull of a lizard-like monstrosity, these structures could have items and boxes within its cabin to scavenge from.

They can also be great places to snipe from, as metal ladders lead from a catwalk platform up to the cabin’s roof, where an Operator can then move to the top of the conveyer belts. 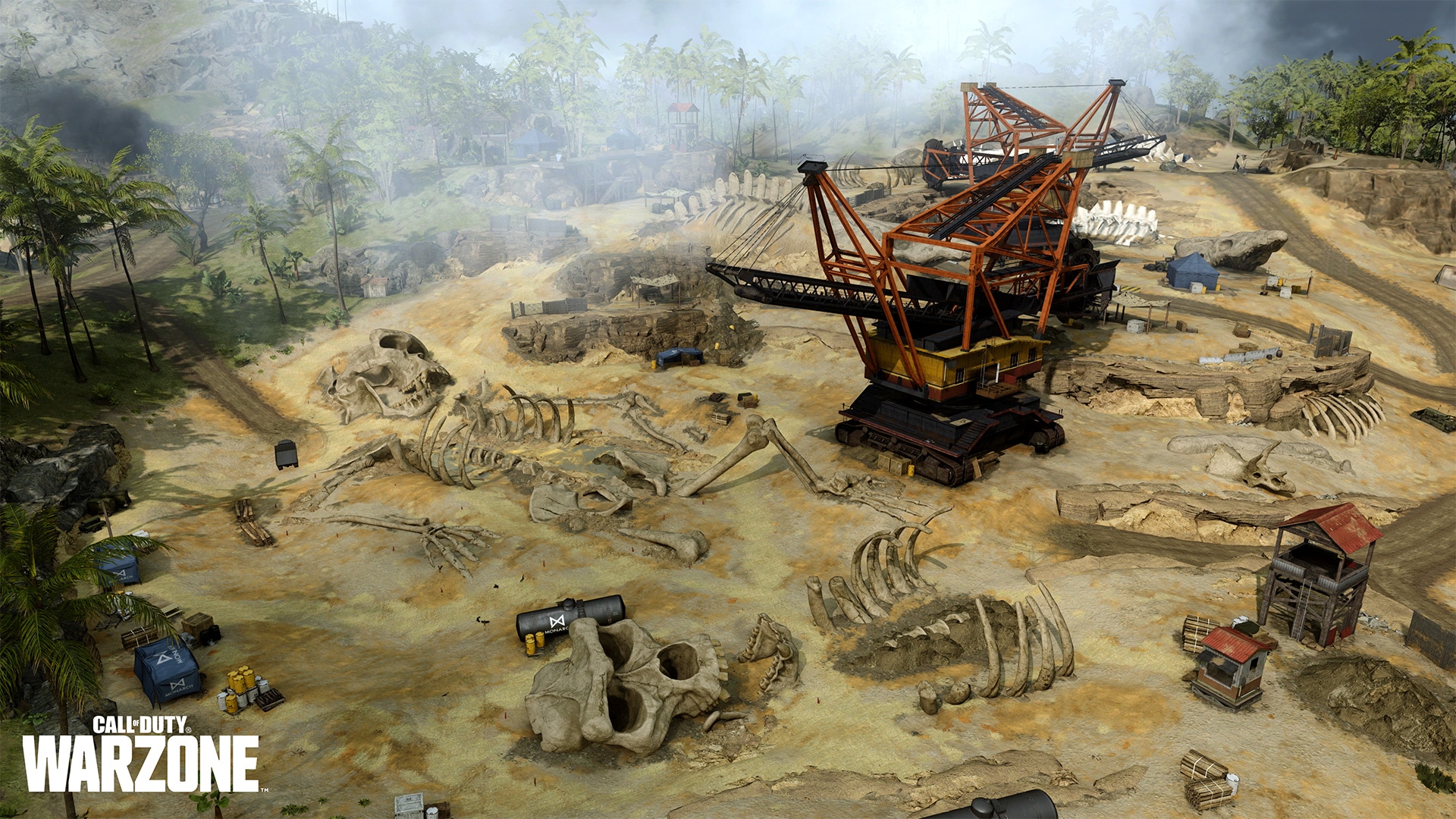 Additional areas of note are watchtowers within the dig site and surrounding it, as well as Monarch-branded equipment. These can be used for cover, including the tents which, while easily penetrable, offer a place to armor up and potentially find some items.

Also: the bones at the site can be used as makeshift cover. They appear more impervious to enemy fire, so hiding behind them might be helpful when an enemy team pins you down.

Updates to Runway, Peak, and Lagoon

Both Raven Software and Toys for Bob contributed major updates across Caldera outside of the Dig Site – three prime examples being the Peak, Runway, and Lagoon points of interest. 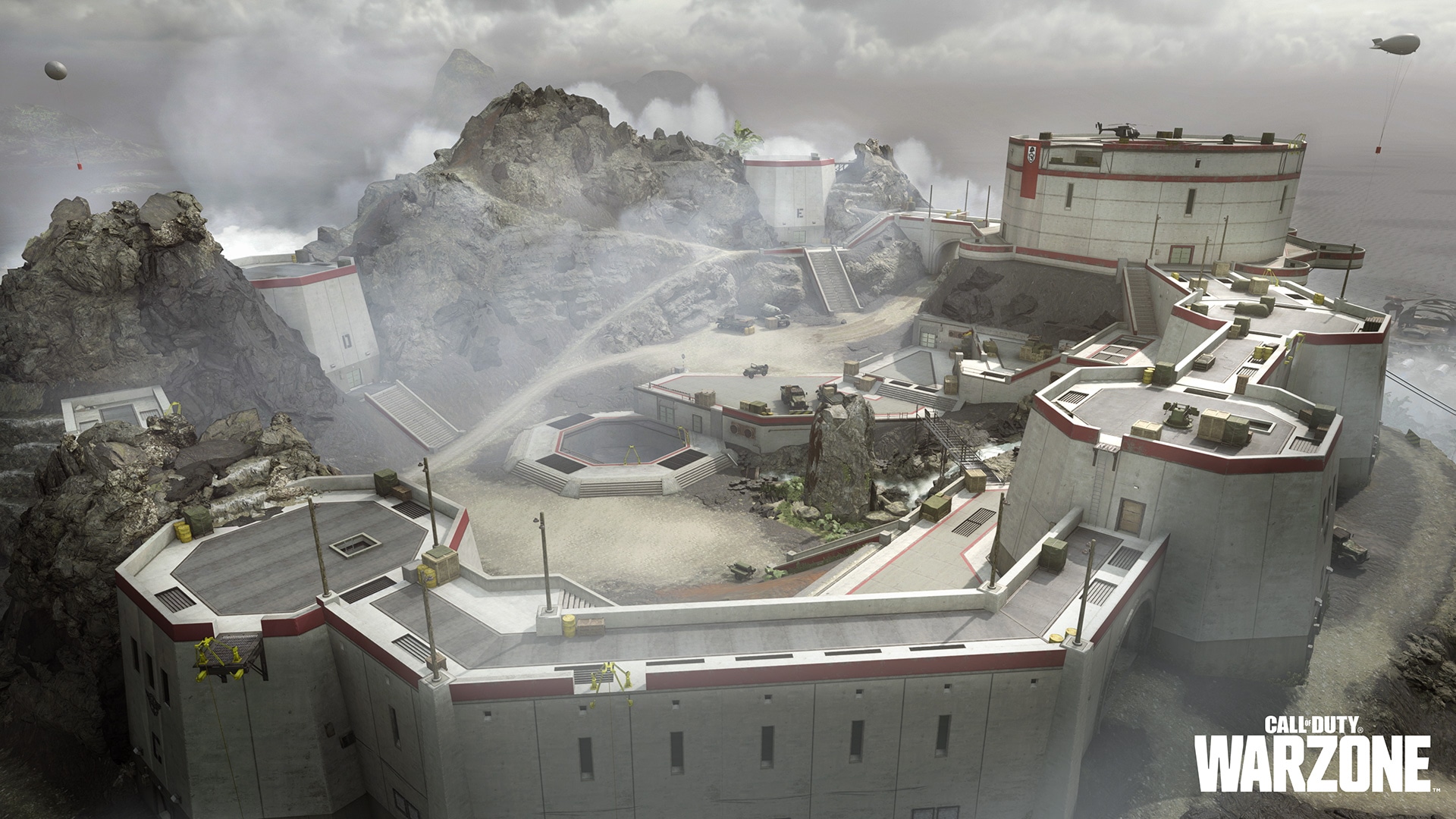 The rebuilt Peak features increased accessibility to the stronghold buildings, the natural mountaintop, and the depths of the dormant volcano, now smoothed over with concrete.

Tunnels leading into this cavern are also fully constructed, with supply trucks, crates, and small wooden barriers living in this space. 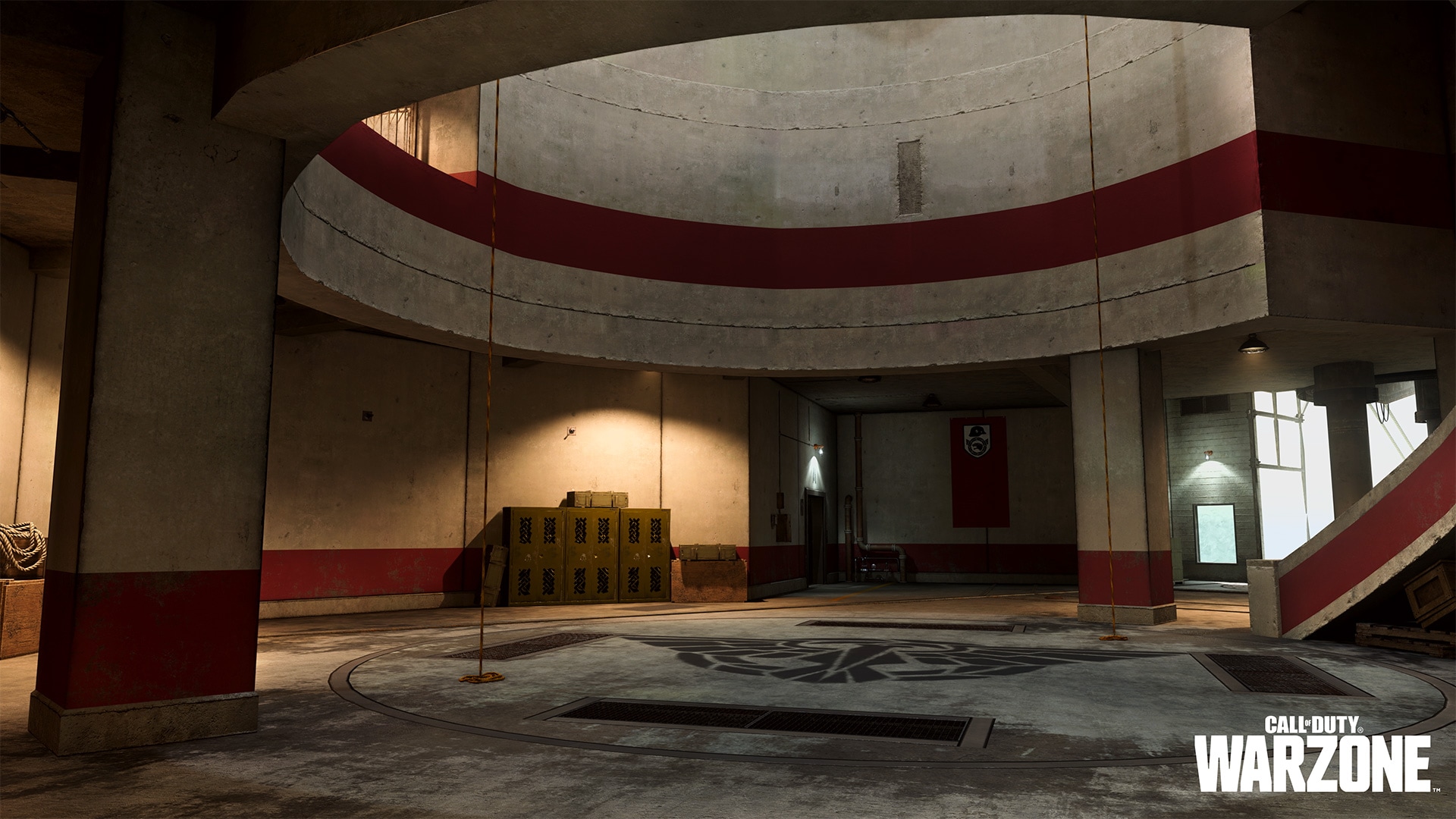 These recent developments grant Operators new ways to deal with verticality. Find additional exterior and interior ascenders around the mountain and within stronghold buildings, such as the large multi-sided cable-car station. Alternatively, there are a few new staircases at the center of the Peak leading up to each of the main buildings.

All these updates grant more opportunities for finding Supply Boxes and engagements, which may crank up the heat on an already hot drop.

In a pinch or after clearing the area, it’s not a bad idea to take to the skies and fly down to nearly anywhere in Caldera – granted you have enough skill with a parachute. Just know that an Operator in the sky is exposed to attacks just as much as the storm looming above. 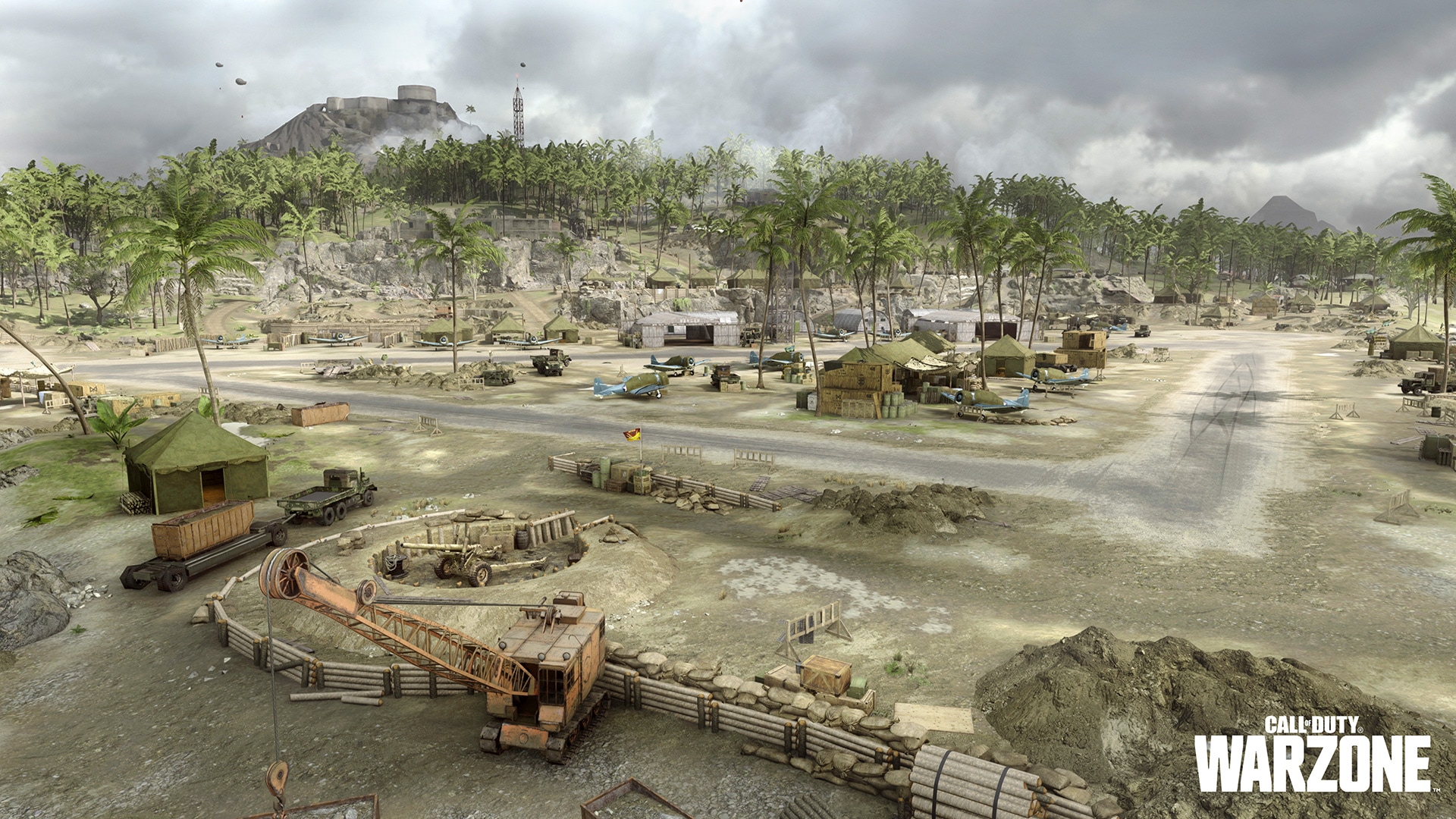 The Runway is clear for your squad landing, looting, and being the launch point towards a successful Battle Royale.

Note the triangular tarmac near the rocky shore with tents, decommissioned planes, and stacks of supplies at the center. Here you’ll find a trench and mortar cannon. More inland, Operators can find several metal hangers, barracks, guard and water towers, and tents leading up to the military operations building you’ve seen before. 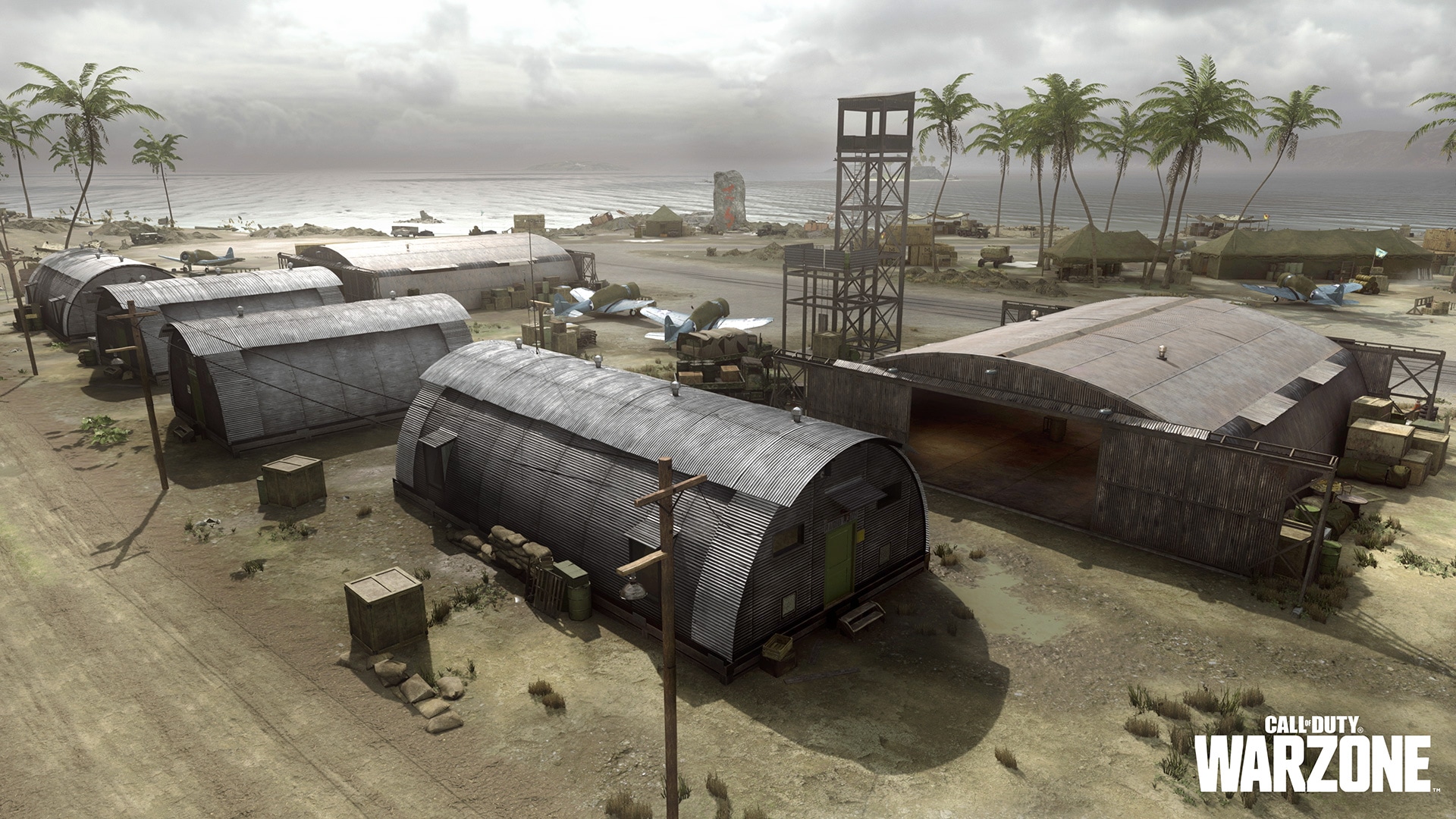 These buildings offer cover and new scavenging opportunities, especially when travelling from the operations building or beachhead. Given that the Runway tends to have drivable vehicles, it may be worth considering this place as a new initial drop spot, or a point to rotate to from the north or east shorelines.

However, know that the new construction also removed foliage and some other natural elements that could have concealed movements. This makes it easier for sharpshooters to pick out their targets, so be on high alert – or have the High Alert Perk – for enemy Operators outside of your peripheral vision.

Hit the Sandbar, New to the Lagoon 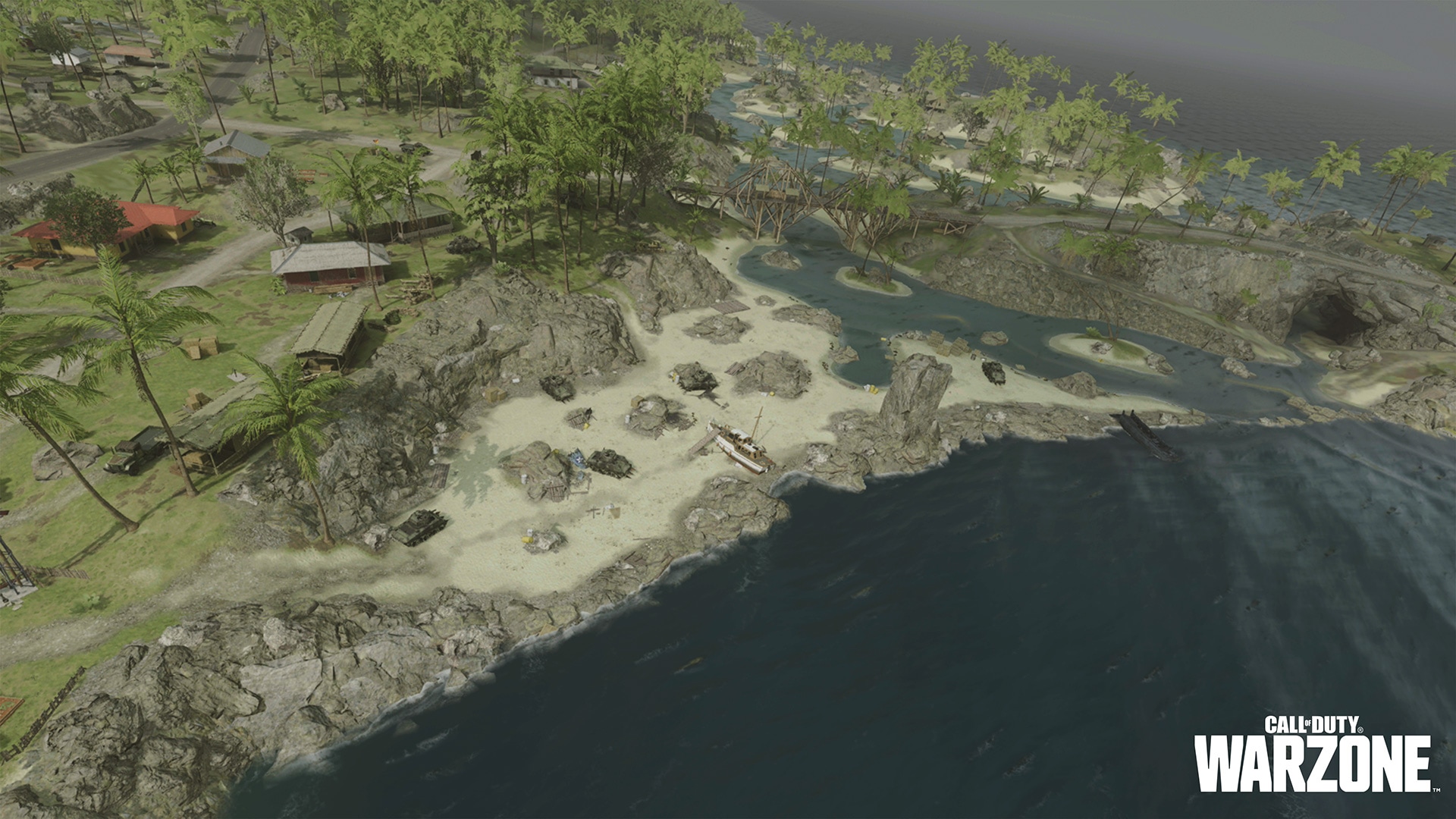 A receding tide revealed an alternative path to the Lagoon – check the north-side of the bridge between Lagoon’s lighthouse and the mainland to see parked trucks, sandbag fortifications, and a rock with mysterious kanji writing…

You may have already been down underneath the bridge and waded through the waters, but with this tide shift, it’s worth seeing what washed up and exploring the area for items.

The only difficult part is scaling up back to the main island, as there is a steep cliff up to above sea level, but hiking paths and the opportunity to go underneath the main bridge mitigate this risk. Alternatively, a vehicle can be thrown down here and driven back up on either side.

Use this new path to check enemies at the Lighthouse, a spot that towers over the Lagoon and the surrounding area. Or make it your excuse to re-discover the caverns, islands, and underground tunnels that the point of interest already offered.

Beware the Hold – Survive to Redeploy 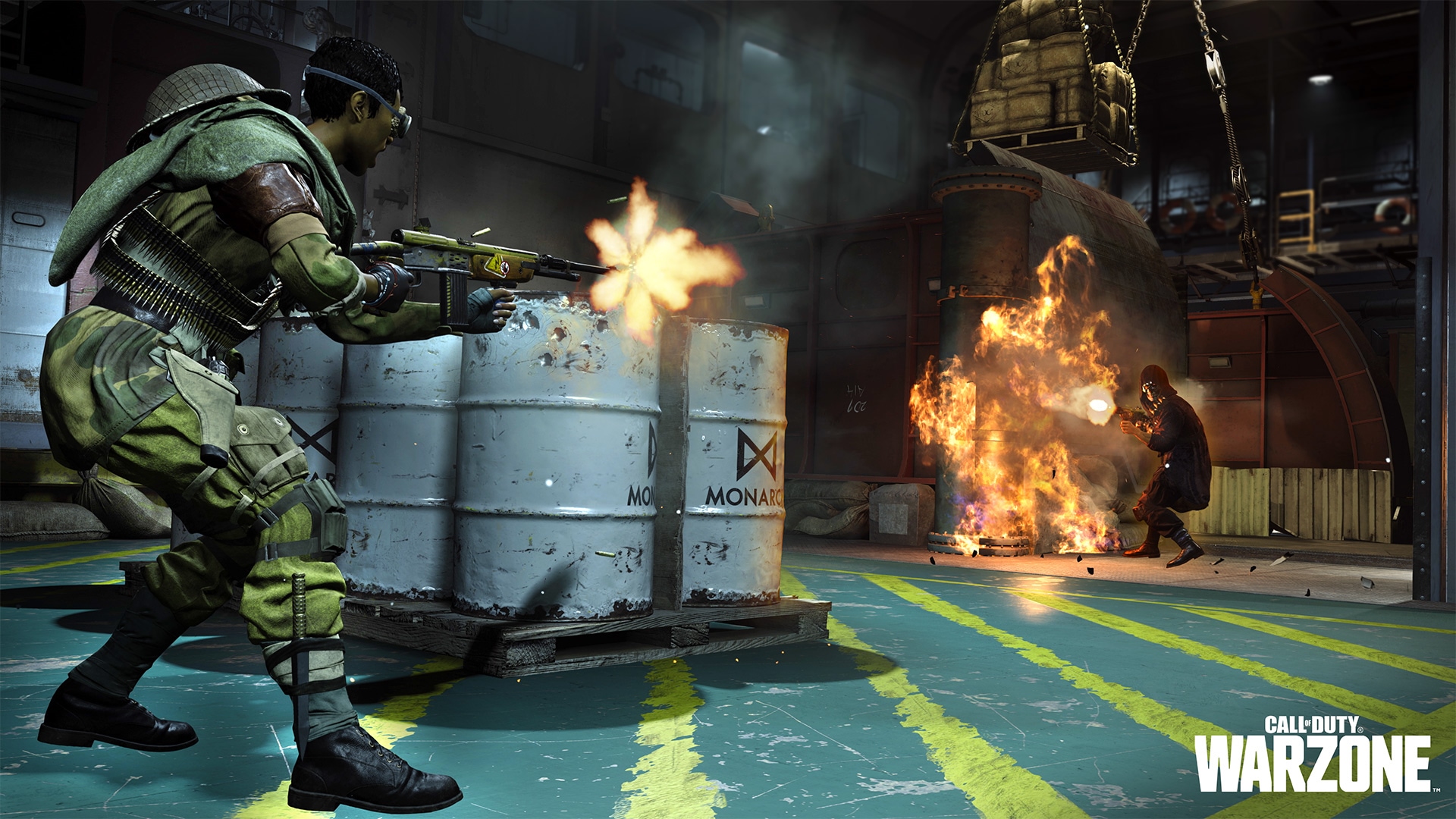 Since Warzone’s launch in 2020, Toys for Bob were responsible for several post-elimination duel areas, including the reimagining of Rush during Season Five of Call of Duty®: Black Ops Cold War.

For this season, the studio was tapped to create the Hold, a three-lane arena designed off learnings from the community and themed for an island in peril.

From either end of the Hold, Operators can run through control rooms on the perimeter. These tight corridors are great for close-quarters weapons, and doors facing the arena’s interior offers a great flank route should the enemy not be found at their spawn.

The Hold’s inner space contains vital machinery which creates a tiny box-like space for the Overtime flag to spawn in, precariously placed underneath a hanging stack of crates. While it can be difficult to get sightlines across the map, your best bet is to find the right-angle past the machines, boxes, and containers.

Strategies for survival mirror that of other symmetrical arenas, from using equipment to narrow down an enemy’s exact location to using the lane that plays most to the given weapon’s strengths. For example: shotguns and SMGs could be more suited for perimeter fighting, while assault rifles and LMGs can find suitable engagements by holding down the central lanes. 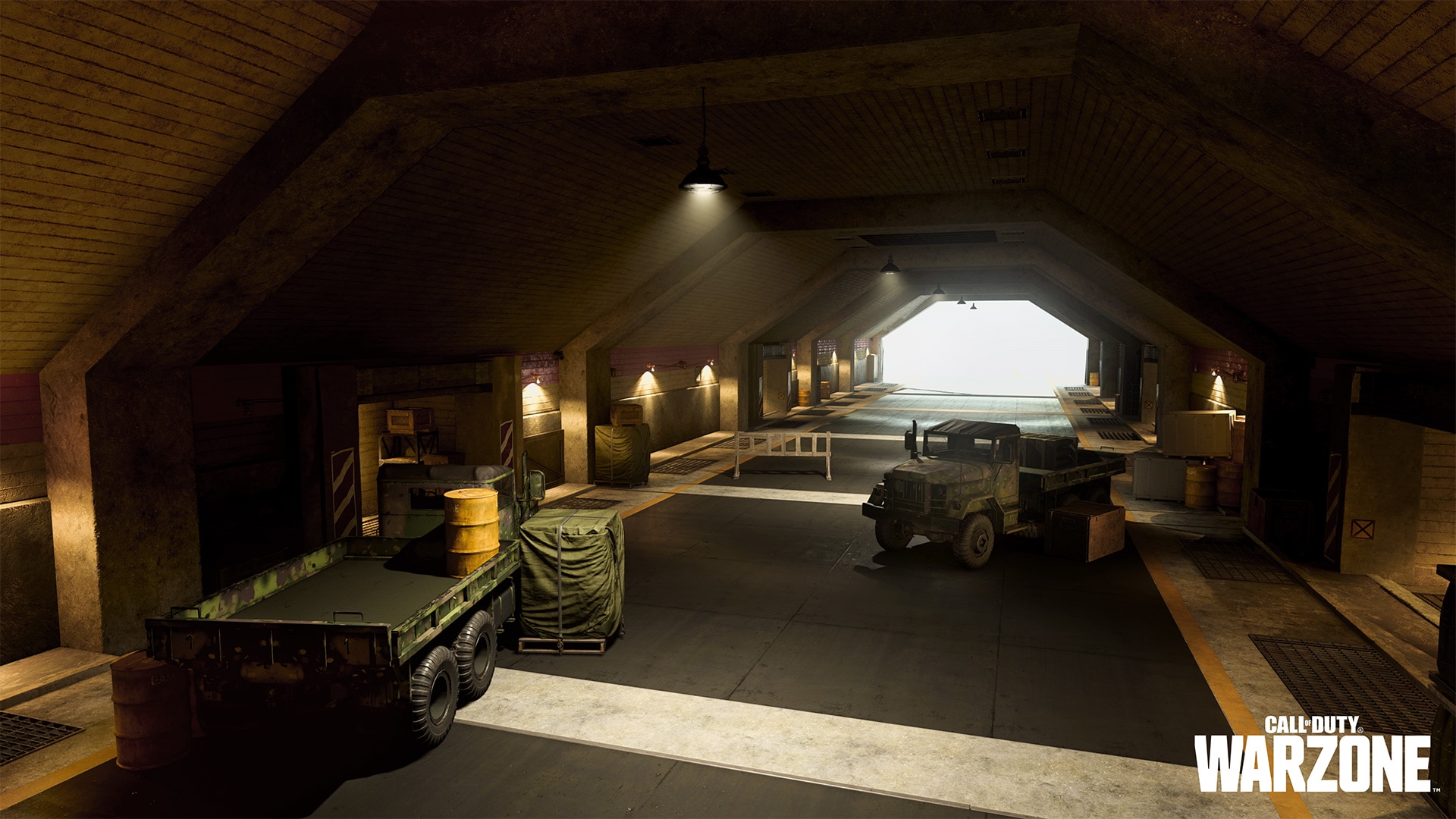 In this Season, the new Sabotage Contract will increase the risk-reward of travelling across Caldera on wheels or in the air.

After picking up a Sabotage Contract, an Operator and their squad will be given a vehicle target somewhere on the map. Take out this vehicle within the time limit for a Cash bonus, an increased Contract Level, and an Armored Truck Deployment.

This Armored Truck is similar to the one seen in modes like Armored Royale, touting increased health and a turret seat.

While powerful, it’s presence on the map will make your squad a large target, especially if an enemy team picks up a Sabotage Contract. 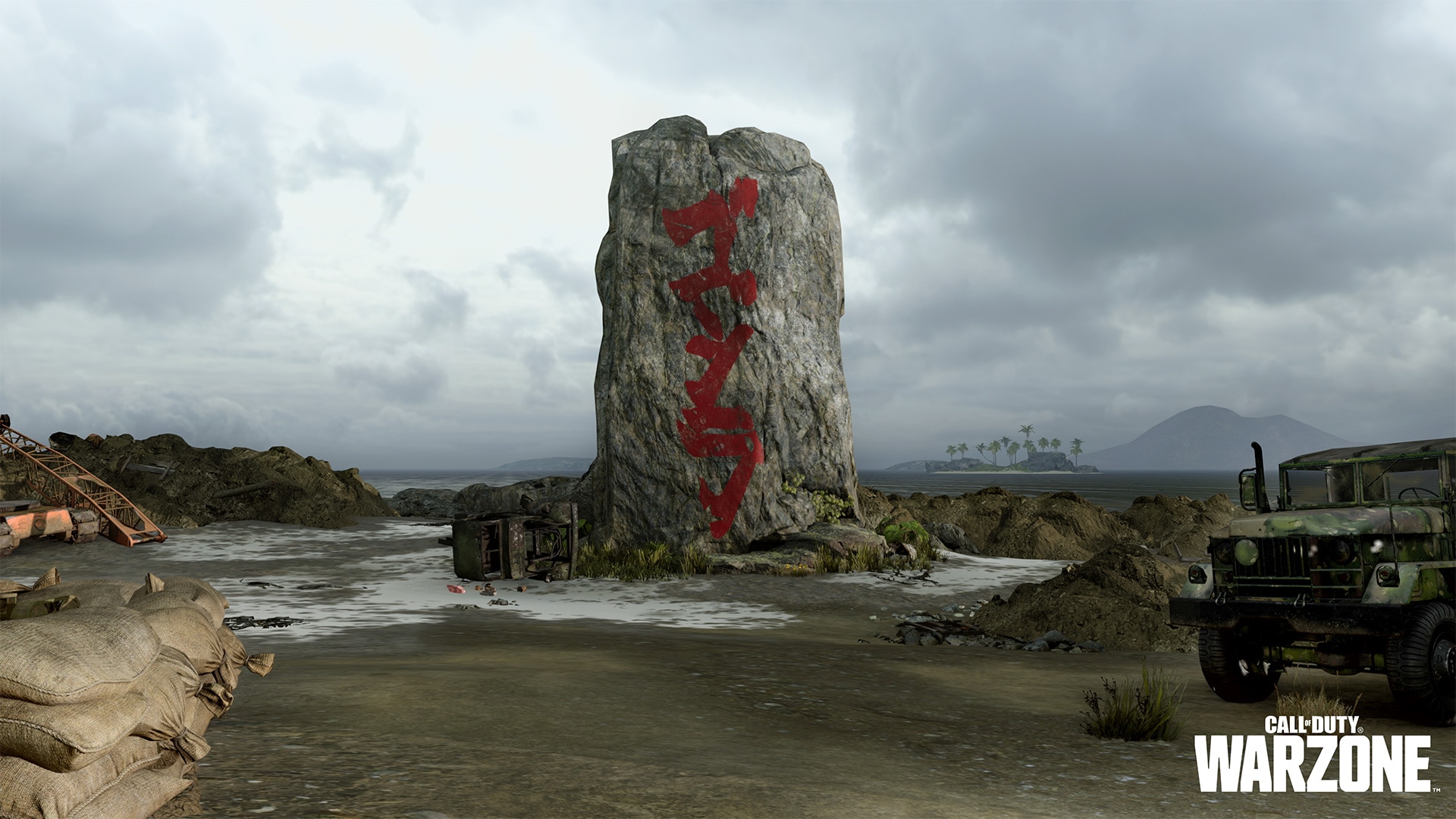 Each season, Raven Software makes an update to the item pool, changing what Operators can find in Supply Boxes or on the ground around Caldera. One of the biggest additions this season is a new lootable item type: Perks.

As of this update, the following Perks can be found as Legendary Rarity loot:

You can check the Loadout screen in-game for definitions of each Perk, but some standouts are Battle Hardened, which increases resistance to Tactical Grenades, and Tempered, a newer perk that allows full armor with only two plates and immediately refills armor on pickup.

While these Perks are valuable finds at any time in a Battle Royale, it also makes opening Supply Boxes once you have your preferred weapons and equipment more meaningful. A player can equip all eight perks at once if found, but they cannot equip more than one of the same perk. If the same perk is found, be sure to ping a squadmate and share.

At the risk of revealing your position, taking a chance on opening Supply Boxes could result in a boost to your awareness (via High Alert), a steady stream of equipment pieces (with Restock), or other valuable passive benefits. 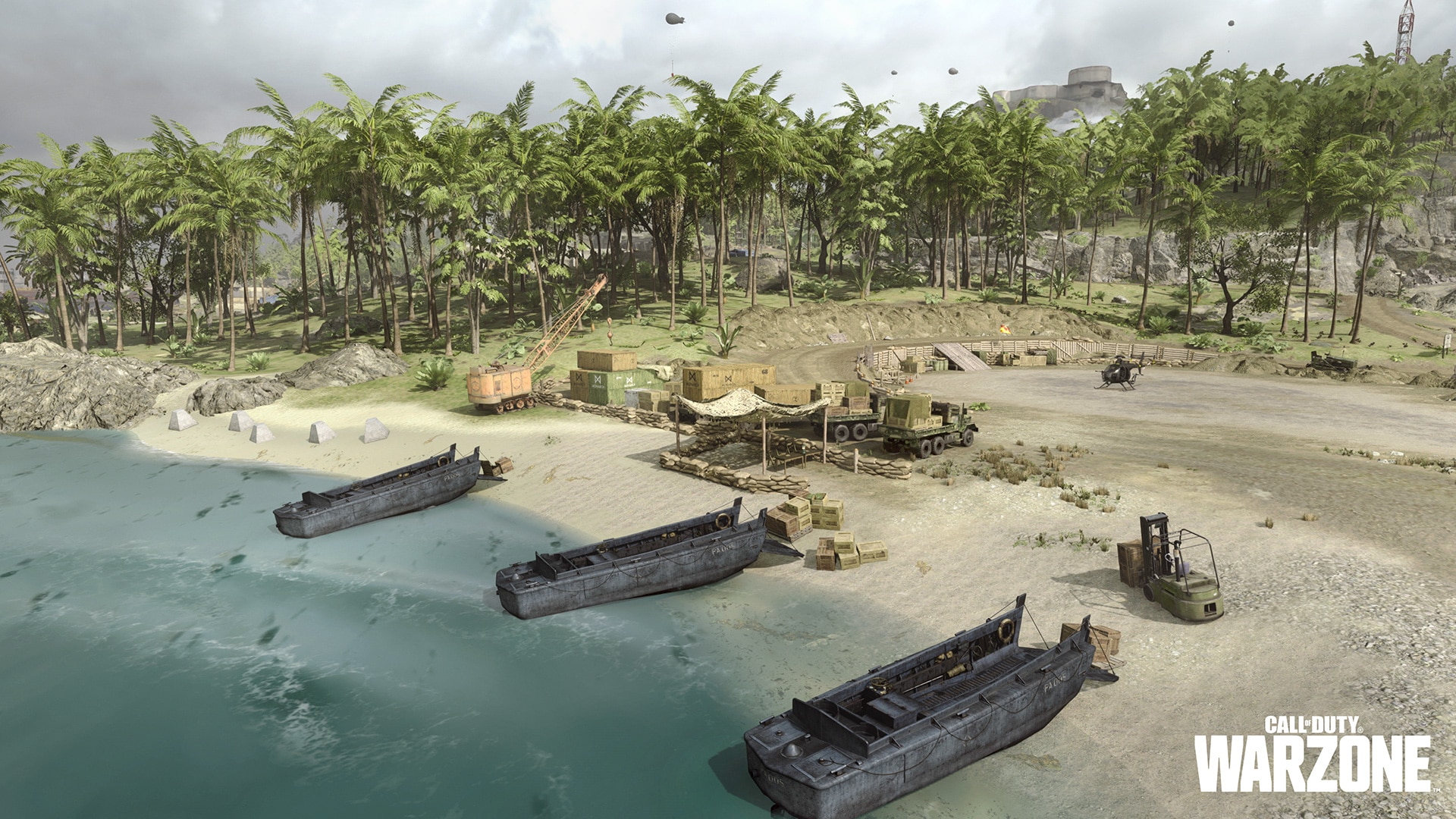 1. Can you Dig It? As a new area, Dig Site can easily become a point of interest with high energy. Beam enemies from cover as you move through the inner dig site tents, towers, bones, and shack, taking a glance up at the excavators to see if any snipers are taking position on the conveyor belts. Use the skulls, rib cages, and other bones throughout the Dig Site as solid cover against enemy attacks. While they could be easily crushed by a titan’s stomp or well-placed giant stone, they are still strong enough to stop enemy attacks.

2. Double Black-Diamond Peak. Dropping in on Peak can be a daunting yet rewarding start to your Battle Royale match. Stick together with your squadmates, communicate often, and check every building – old or new – for Supply Boxes and items that could help with survival. Long-range weaponry can help lock down the new vehicle tunnels and outdoor areas. Meanwhile, when travelling within the stronghold buildings, consider finding an SMG, shotgun, or fast-firing assault rifle to clear rooms.

3. A Clear Tarmac. The Runway’s seclusion and natural cover are no more. In its place, Operators should search the hangers and new buildings for items, take to guard towers to scout ahead for enemies, and above all else, not run out in the open where the tall grass, fauna, and trees used to conceal movement.

4. Hold Your Fire. The Hold’s small symmetrical design encourages Operators to check lanes with equipment before revealing their position. Even if you catch a glimpse of an enemy, consider waiting to take the first shot until they are truly unaware of your presence.

5. No Box Unopened. With Perks being added in the update, finding and opening Supply Boxes during the mid-game could become a more viable strategy for victory. Learn where they are usually located and listen to their hum; the best scavengers may be rewarded with valuable Perks.