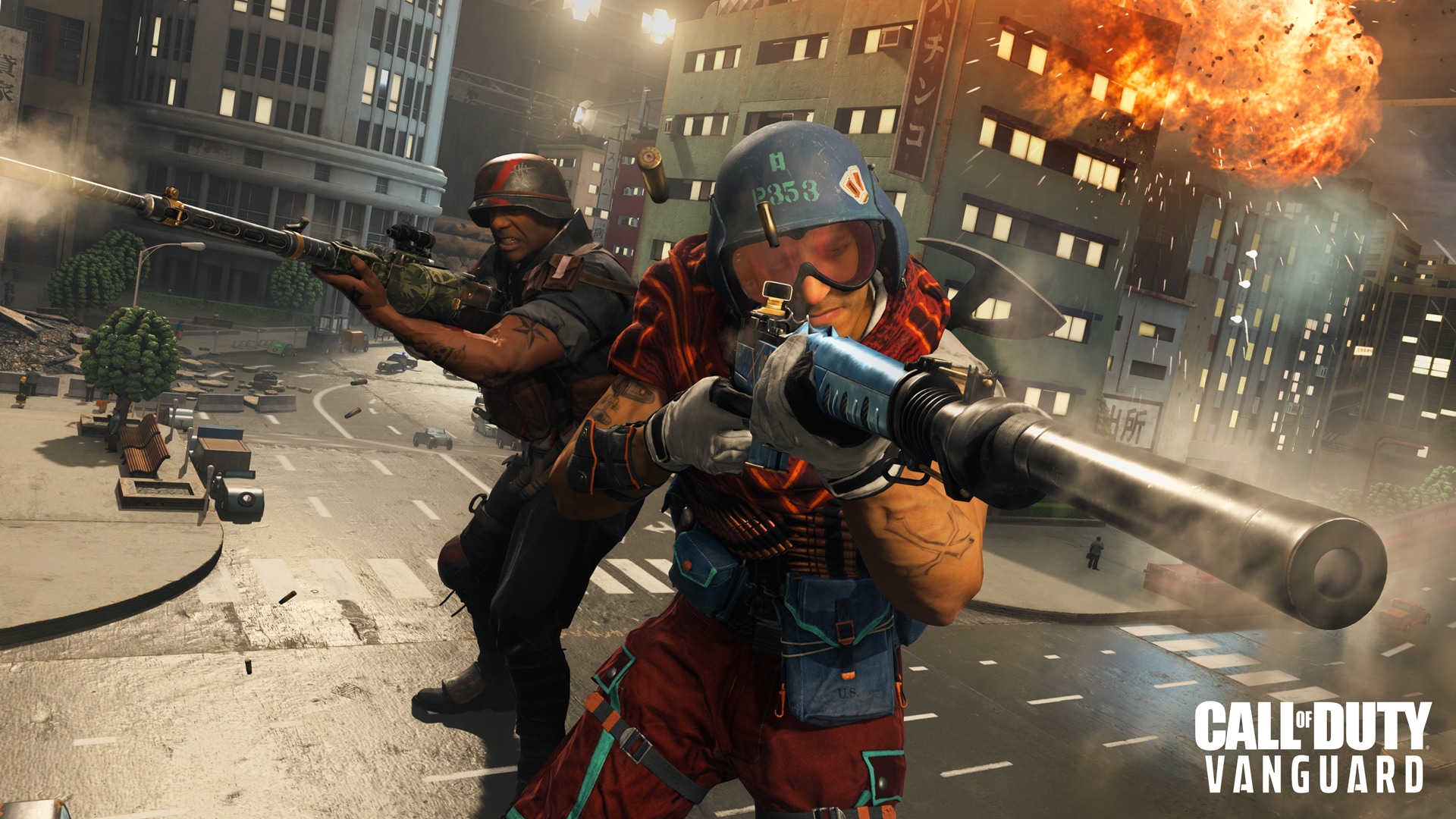 Mayhem is the name of the game in the latest Multiplayer map launching alongside Season Three of Call of Duty®: Vanguard on April 27. This small map offers constant engagements and epic set pieces as you stomp around like a monster set loose in the city.

Visit our Season Three announcement blog for a deep dive on what’s going live at Season Three launch and beyond. Now take up your position on set as we cover the ins and outs of Mayhem. The cameras will start rolling any minute now. 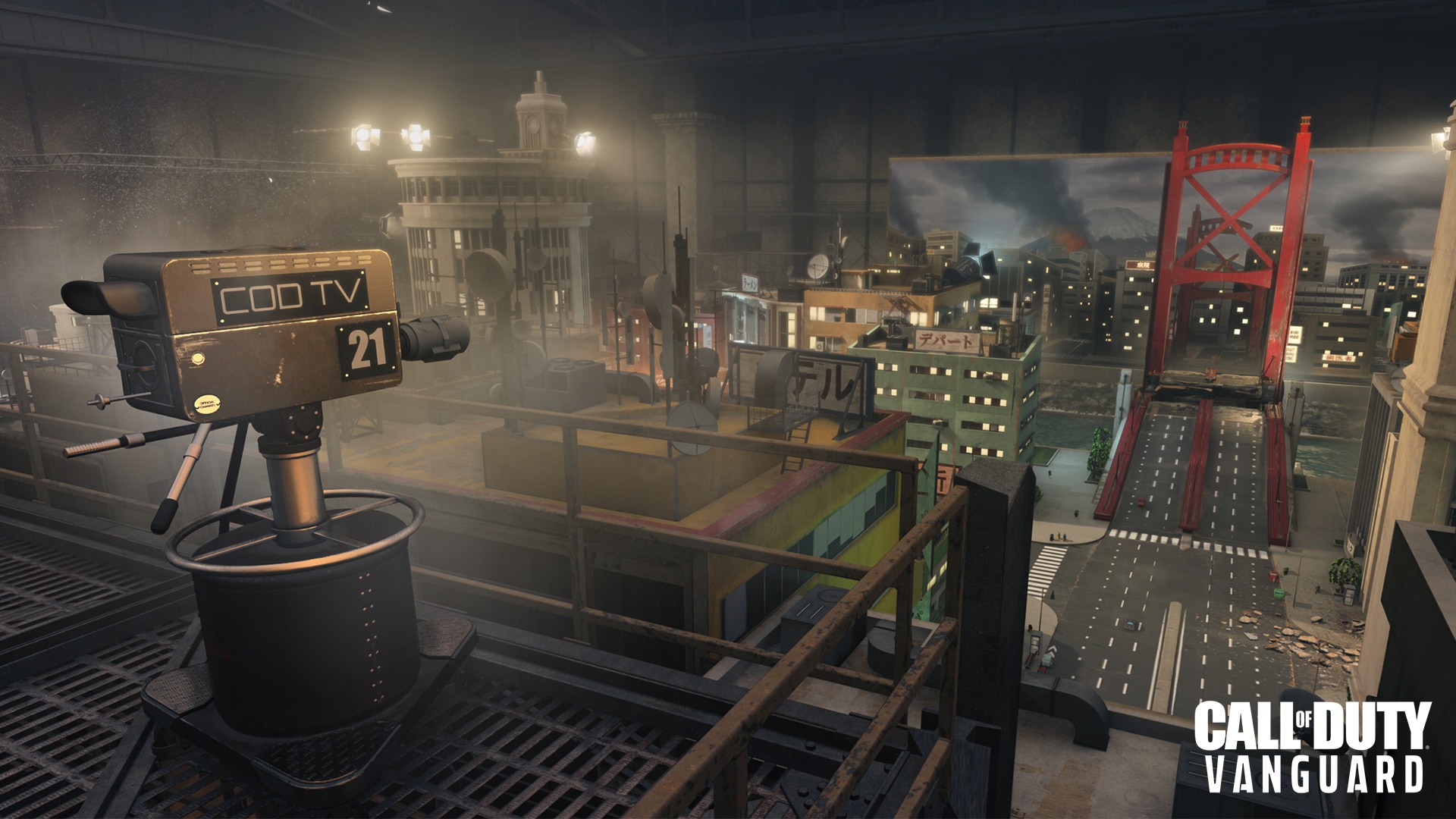 Mayhem redefines the meaning of chaos with one of the tightest play spaces in Call of Duty history. Prepare to take on gargantuan proportions as you stomp through a small-scale replica of a bustling metropolis, standing nearly half as high as a majority of the central buildings.

The outer props define a 1950s movie set, complete with a UFO, an active volcano, and a monster suit ready for action. For your purposes, however, the battle is set squarely within and immediately around the central city, with an off-set flanking route along the northern path and a traversable ocean path in the south.

Make no mistake: the time to engagement here is miniscule. Whichever direction you choose, you’re bound to collide with an enemy Operator in no time, but there are still some available tricks to catch your opponents off guard. The large pieces of cover throughout give you the chance to avoid taking damage and force the enemy to your position; likewise, there are rapid entry points into the middle from the south, west, and east pathways.

The northern path alone abstains from entry points along its middle portion, making it the least conspicuous route on the map, though it’s far from a safe zone, as Operators can easily pour in from either end. It also offers the best spots to take shelter from aerial Killstreaks, drawing further attention when the armaments start raining down. With a clear view of the skies overhead, it’s bound to be a common occurrence.

At the center lies the main road that cuts through the replica city with a few branching streets throughout. Expect intense fighting here, so approach cautiously. Also note the broken bridge jutting out toward the south path, granting a powerful vantage point over enemies tromping through the ocean.

Loadouts to Brave the Chaos 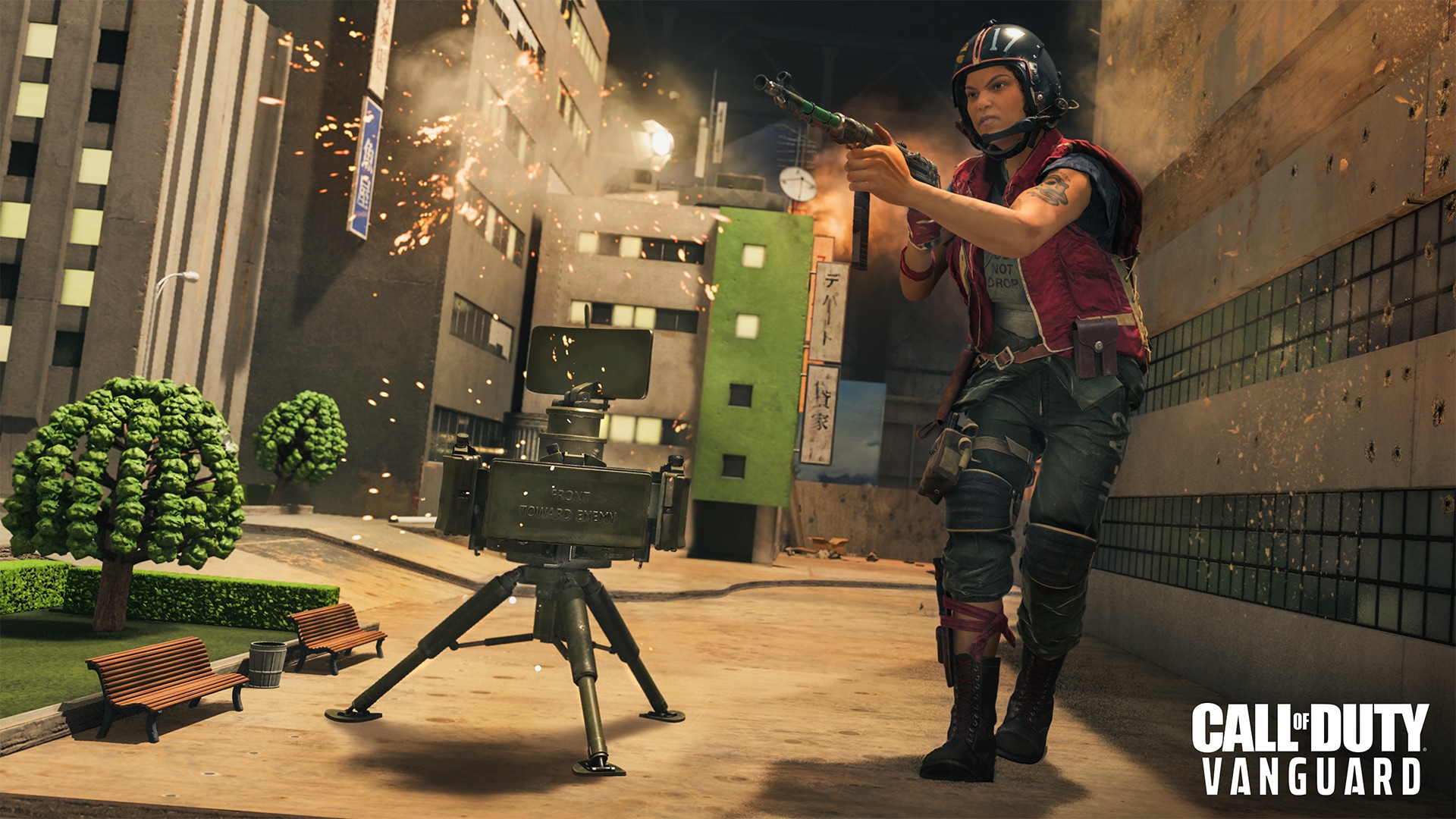 With two new functional weapons joining the Season Three Battle Pass, we’ve got a Loadout for each that’s focused on reigning supreme in Mayhem’s enclosed spaces. Purchase the Season Three Battle Pass for instant access to the Mateo Hernandez Operator (and two Legendary Skins) and a 45-minute Double Weapon XP Token. Pair that with Mayhem and you’ll be unlocking these attachments in no time.

Take them down quickly using this critical headshot configuration. The star here is the ZP Custom attachment, particularly its improved headshot damage coupled with the fact that eliminated enemies won’t display skulls to teammates at the location of their death.

Boost your Aim Down Sights speed with the Leather Grip and the ZP M502 Custom Stock, and pick Subsonic rounds to avoid pinging the minimap when firing. A low profile might not seem essential on a tiny map like this, but every bit of intel you keep from the enemy improves your chances of landing the first shot, an essential component when going for the one-hit kill.

Improve your covert actions by staying on the move with Ghost, paired with Forward Intel for a near full map view providing essential reinforcement indicators. Finish off your Perk selection with Lightweight for greater mobility. If there’s ever a way to control the chaos on Mayhem, this is the Loadout to do it.

If one shot won’t do it, then drown them with many. This weapon configuration improves the Nikita’s already blazing-fast fire rate while providing a highly stable barrel attachment, a mobility enhancing stock, and a swift reload. Fire down sights or off the hip as needed; despite the weapon’s subpar hip-fire accuracy, its high fire rate ensures quick takedowns at close range.

Go with Fortified for added explosive resistance, an essential defense in Mayhem’s confined quarters. Use Tracker to improve your awareness of the enemy position while hiding the death markers of enemies you eliminate. Finally, Scavenger ensures that you remain stocked on ammo for the fights ahead, a vital component considering how quickly this weapon chews through rounds. 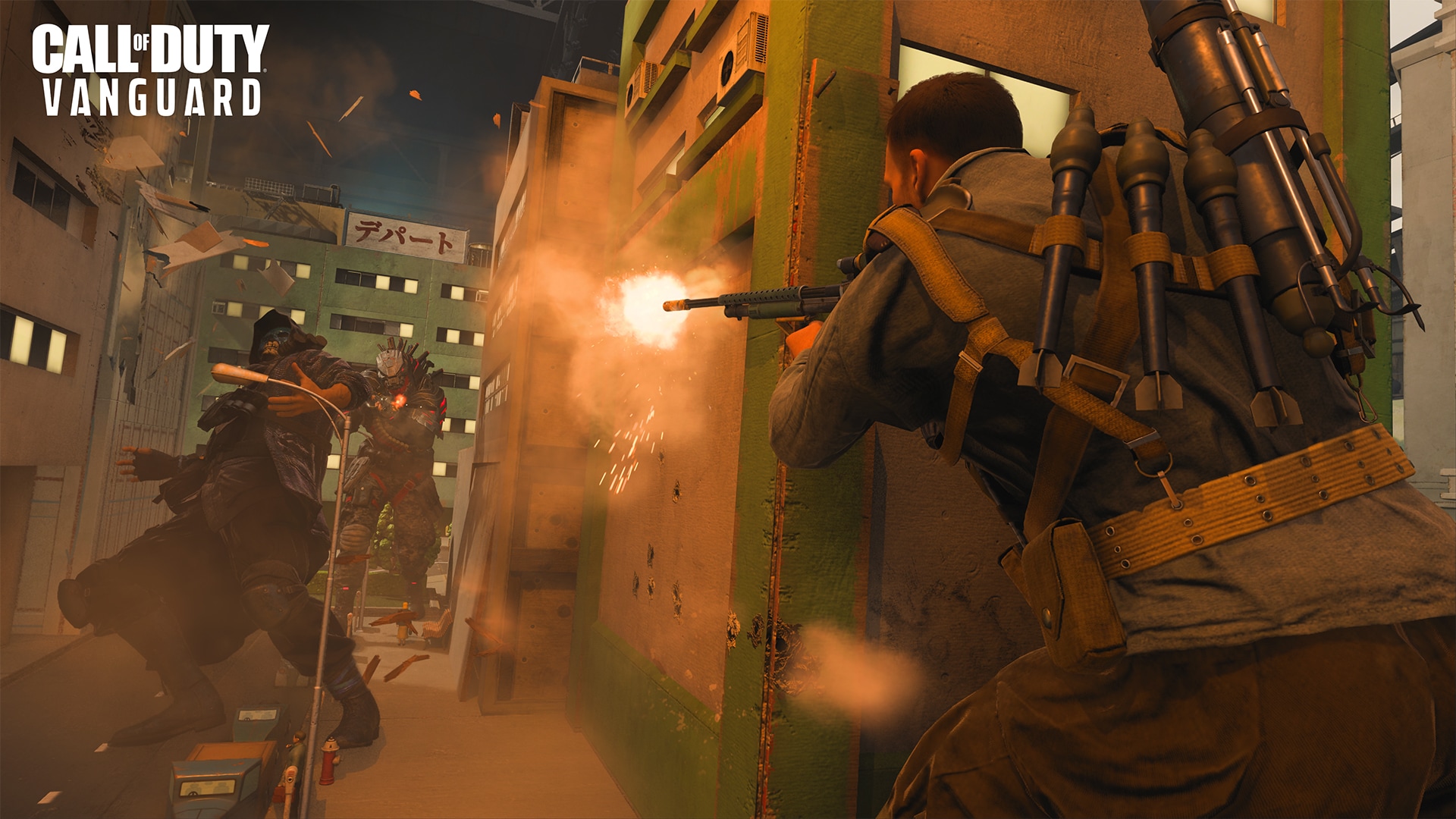 10. Trophy System Out. The new Trophy System Field Upgrade courtesy of Season Three is an essential piece of equipment here. It destroys up to three nearby pieces of equipment and projectiles, and it’s got a fast recharge to boot. Utilize this bad boy to keep you and your team safe when the grenades start flying.

9. Building on Fire. Beware of — and take advantage of — the center cubby marked by the building on fire. It’s a great spot to take out enemy Operators rushing down the main path, but be sure to move on, as it’s easy to get rushed by a vengeance-seeking foe. Be on the lookout for enemies attempting the same when passing by.

8. From the Hip. The more mobile you are, the better your chances of avoiding damage in a fight and the less likely you are to be taken out from behind. Equip your favorite SMG or Shotgun with attachments improving your hip-fire accuracy so you can stay light on your feet when engaging the enemy. Add Lightweight to boost your footwork even further.

7. Nice Try. On either side of the southern bridge are two inlets that can be used to mantle up into the city. They’re great for this purpose, and as a means for taking out pesky enemies attempting to use the bridge as a power position over your teammates traversing the ocean path.

6. Chase Those Skulls. On a map this small, it’s doubly essential that you use every bit of intel available to you. When you see a skull indicating a fallen teammate, you can bet there’s an enemy close by. Chase them down and seek vengeance for your friends.

5. Everyone Off the Set! Whenever enemy aerial Killstreaks become a problem, call your team up to the northern route where you’re best protected from overhead armaments. By convening in a concentrated group, it’ll be harder for the enemy to breach your position while frustrating their attempts to take you out from above. Throw out a Trophy System for added defense, and once the aerial attack is over, fan out and retake control of the map.

4. Counter Spy Plane. Pick the Counter Spy Plane Killstreak to take away the enemy team’s ability to track you on the minimap. While landing four consecutive kills isn’t exactly a walk in the park, it’s more likely to occur on Mayhem where engagements follow one after the other. Equip the Engineer Perk when the enemy attempts to do the same to you.

3. Heavy Recoil? No Problem. With Mayhem’s compact sightlines, recoil isn’t nearly as big an issue as on larger maps. Go ahead and equip those larger caliber rounds and heavy barrels to maximize your damage potential. With enemies this close, a little extra recoil won’t hold you back from landing your shots.

2. Track Your Friends, Too. Being aware of your teammates’ position is just as important as being aware of the enemy’s, at least if you’re planning to survive long enough to call in some Killstreaks. You don’t necessarily have to cluster together, but knowing where you’ve got a buffer nearby will help you make better decisions when determining which route to take.

1. Let Loose Your Inner Monster. For the best monster experience possible, consider forgoing traditional weapons altogether and opt instead for your melee weapon of choice paired with the Ninja Perk. Your enemies won’t know what hit them as you race in and out of view, stomping through the streets, smacking down anyone and everyone in your way. 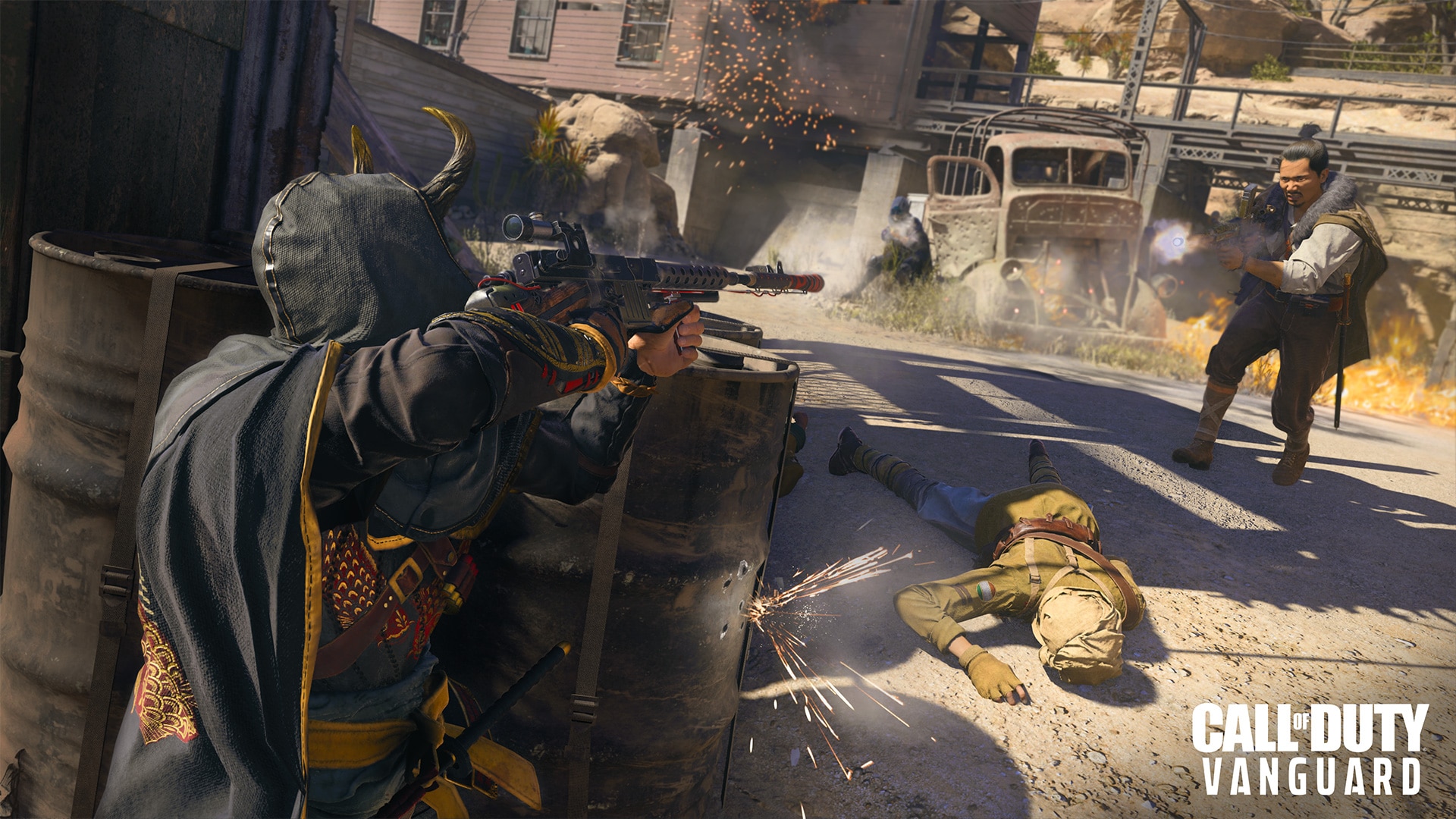 Prepare for a second Multiplayer map to appear later in the season with the arrival of Sphere. This small-sized map features a hidden weapons lab beneath the façade of a coal mine. Its dual layers utilize plenty of interior space for even more close-quarters action in the fight ahead. And as always, it’s free for all Vanguard players.