Call of Duty: Vanguard Zombies—The Next Chapter in the Dark Aether Saga 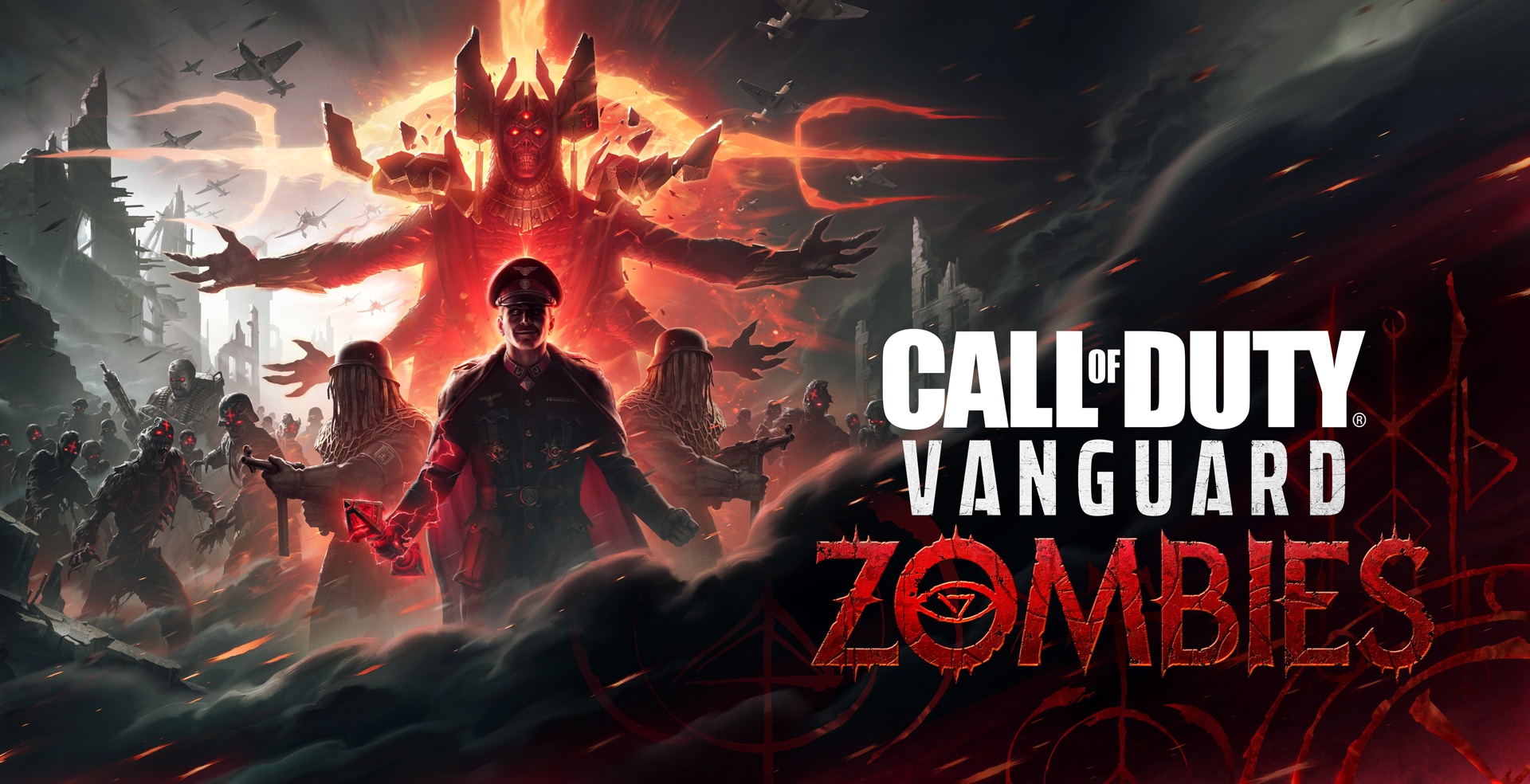 Stalingrad, 1944. The mass graves of fallen soldiers stir as Dark Aether magic animates the dead. This is Call of Duty: Vanguard Zombies, developed by Treyarch Studios in a franchise-first crossover featuring new characters and new horrors awaiting your arrival when Vanguard launches on November 5.

The four-person co-op mode continues and expands on the Dark Aether story first experienced in Call of Duty: Black Ops Cold War. Set in World War II in the ruins of Stalingrad, this new incarnation of Zombies takes players to the darkest corners of the occult, where mortals bond with Dark Aether entities to gain immeasurable power… but at what cost?

The Story of Vanguard Zombies—“Der Anfang” 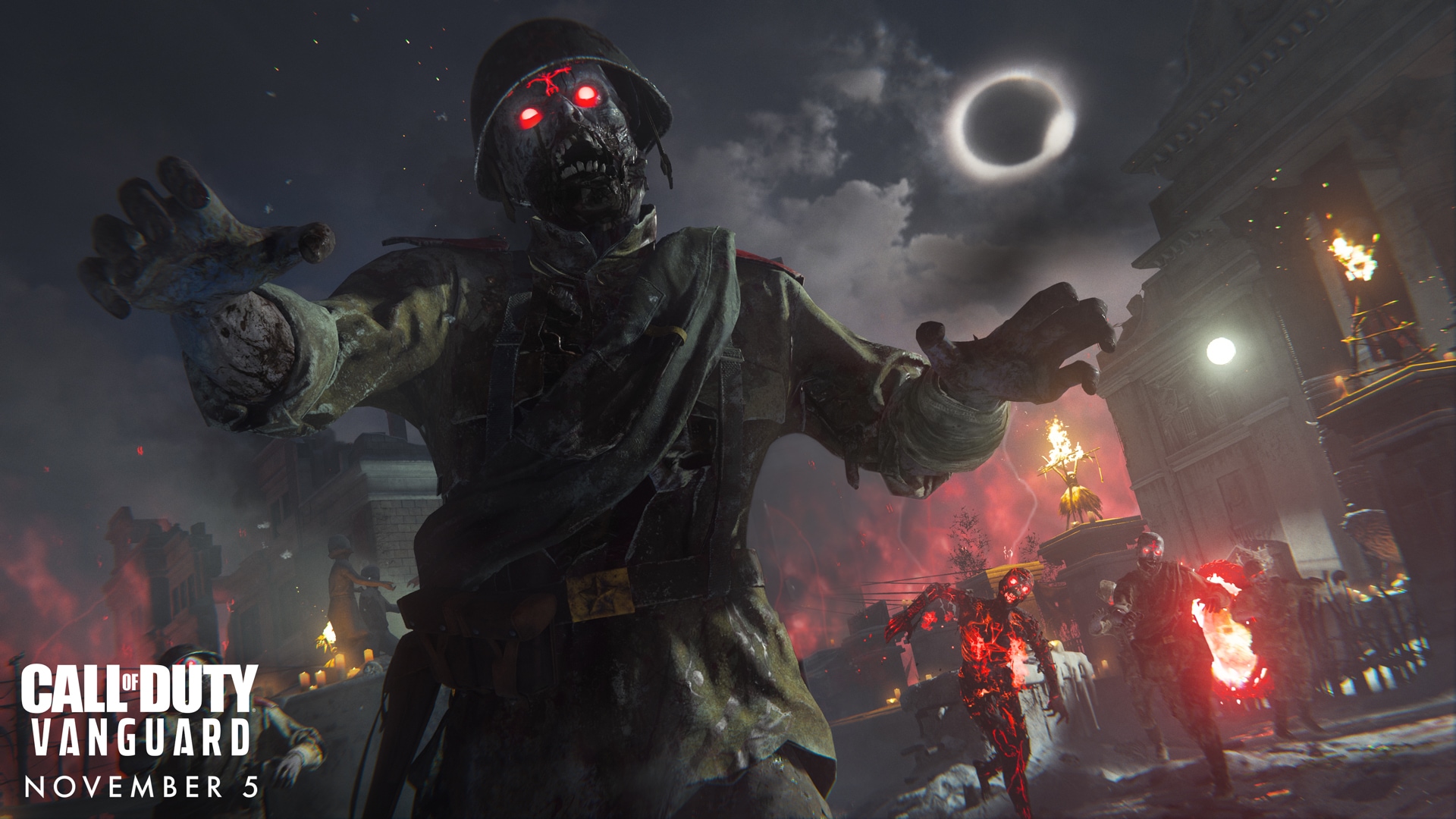 It all began with the opening of the Dark Aether gateway at Projekt Endstation. After the Nazi experiment went catastrophically wrong and punched a hole through the dimensional veil, the effects traveled far and wide. More than we ever knew.

Our Special Forces operatives are stranded in the snowy graveyard of Stalingrad, with no backup and no means of communication, held in by the dark magic of Kortifex the Deathless. Kortifex is one of five Dark Aether entities bonded with mortals via their otherworldly artifacts. The other four—Saraxis the Shadow, Norticus the Conqueror, Inviktor the Destroyer, and Bellekar the Warlock—are in revolt against Kortifex.

“Der Anfang”—or “The Beginning”—introduces players to these Dark Aether entities via their artifacts, which were plundered by antagonist Oberführer Wolfram Von List. This officer was in command of the Die Wahrheit battalion in search of mystical antiquities to help turn the tide of the war in the Nazis’ favor.

Von List, now bonded with Kortifex, has gained the power to raise the dead. What better field to create an army of undead than the mass graves of Stalingrad, a year following the Nazis’ worst defeat in one of the war’s most decisive battles?

Our operatives have one slim hope in the form of help from unexpected sources. Professor Gabriel Krafft, a demonologist forced by Von List to uncover the five artifacts, sent out the initial distress call that got our operatives stuck there in the first place. With his guidance, and the help of the four entities fighting against Kortifex the Deathless, who all can give you special new powers, there might be some way to break the containment spell and keep the undead horde from sweeping across Europe. 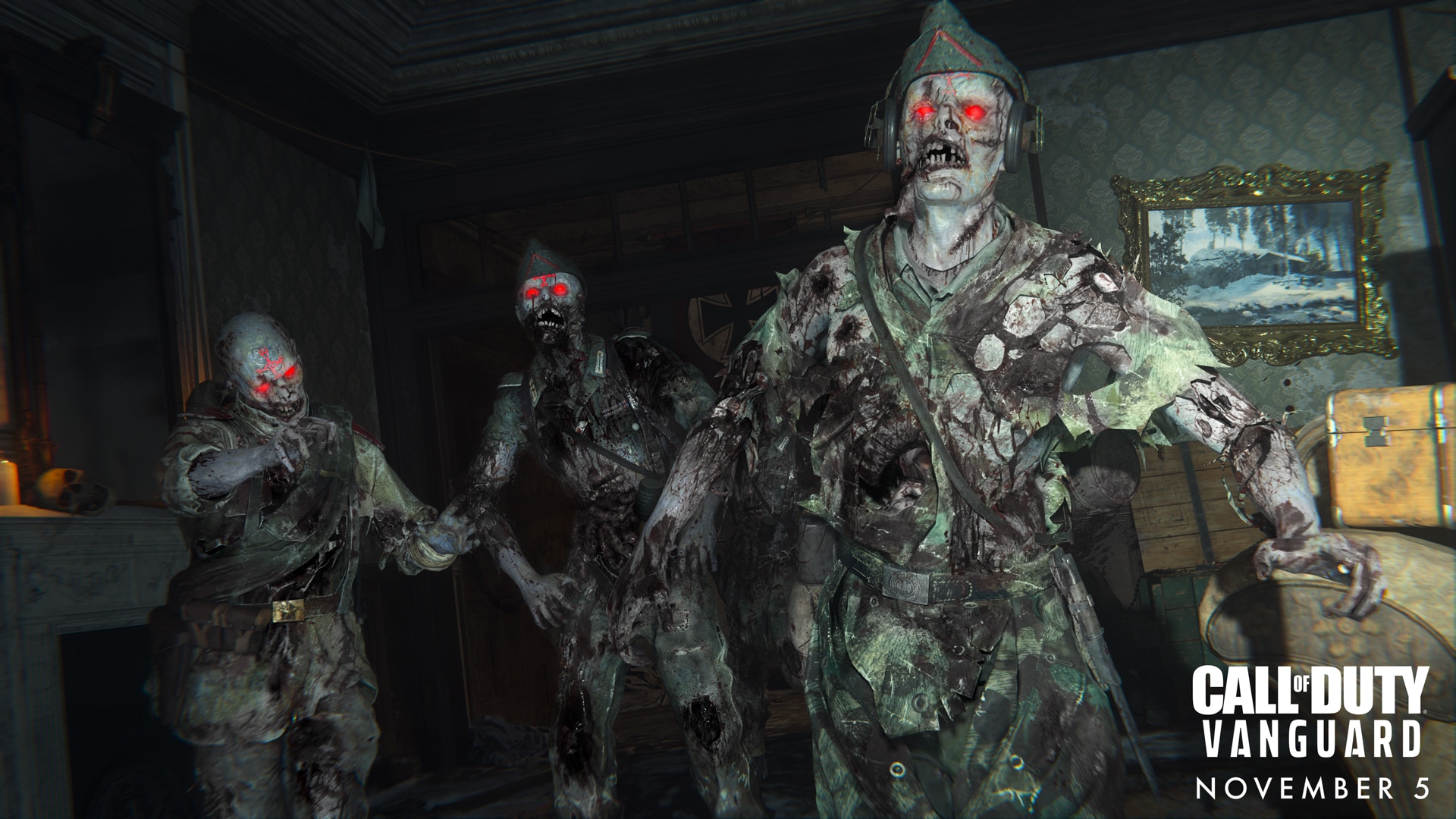 By reentering the World War II setting, Zombies returns to its roots in the era where Call of Duty Zombies first got its start. In this new chapter, Treyarch Studios has utilized Sledgehammer Games’ powerful Vanguard tech to immerse players in a brutal new environment that will appeal to longtime fans and new players alike.

Get right to the action and step into a portal, transporting you via Dark Aether magic to the crux of the fight, whether that means battling the undead on the rain-spattered rooftops of the Hotel Royal or trudging through the swamps of fan-favorite Shi No Numa. Between objectives, explore the ever-expanding forward operating base in Stalingrad to access classic upgrades such as Perks, weapon upgrades, and the Pack-a-Punch. In Vanguard Zombies, it’s not long before you’re wading knee deep in the undead.

“Der Anfang” introduces new upgrades to the Zombies experience as well, such as the powerful Altar of Covenants.

New Powers: The Altar of Covenants 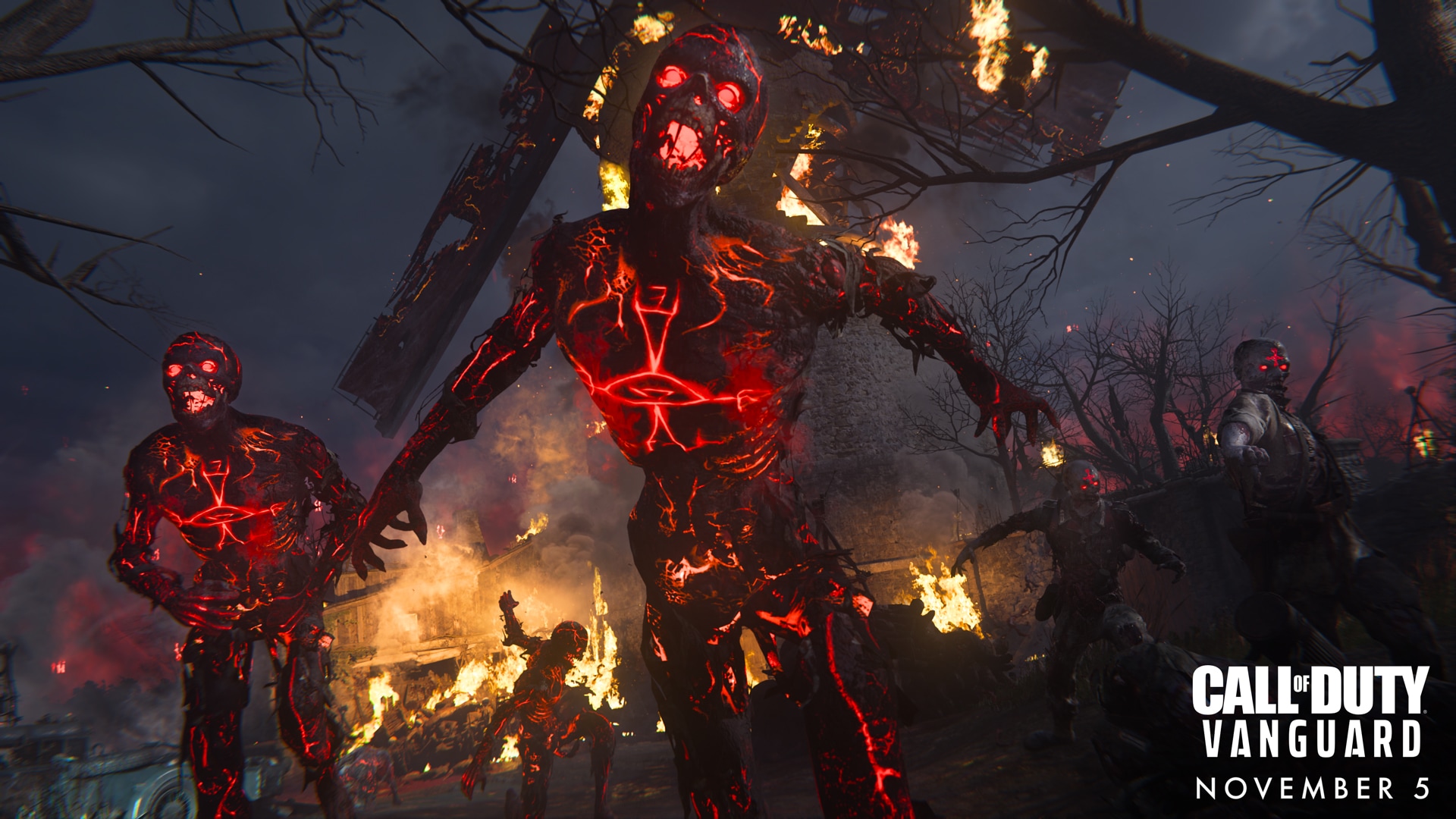 Offer the new Sacrificial Heart loot item to the Altar of Covenants to choose from a variety of upgrades that randomize each time you return from an objective. As just a few examples, players can pick Ammo Gremlin to reload non-equipped weapons over time, Brain Rot to turn zombies into allies, or Unholy Ground to hold down chokepoints and objectives. There will be plenty of Covenants to choose from, empowering players to approach each game differently.

The randomization of these upgrades adds a unique spin to every match. Paired with your other weapons and abilities, the Altar of Covenants can create unique gameplay builds never before experienced in Zombies. You’ll need them as you fight new, terrifying enemies like the MG-wielding Sturmkrieger and the explosive Boom Schreiers.

Connected Across All Modes and Platforms 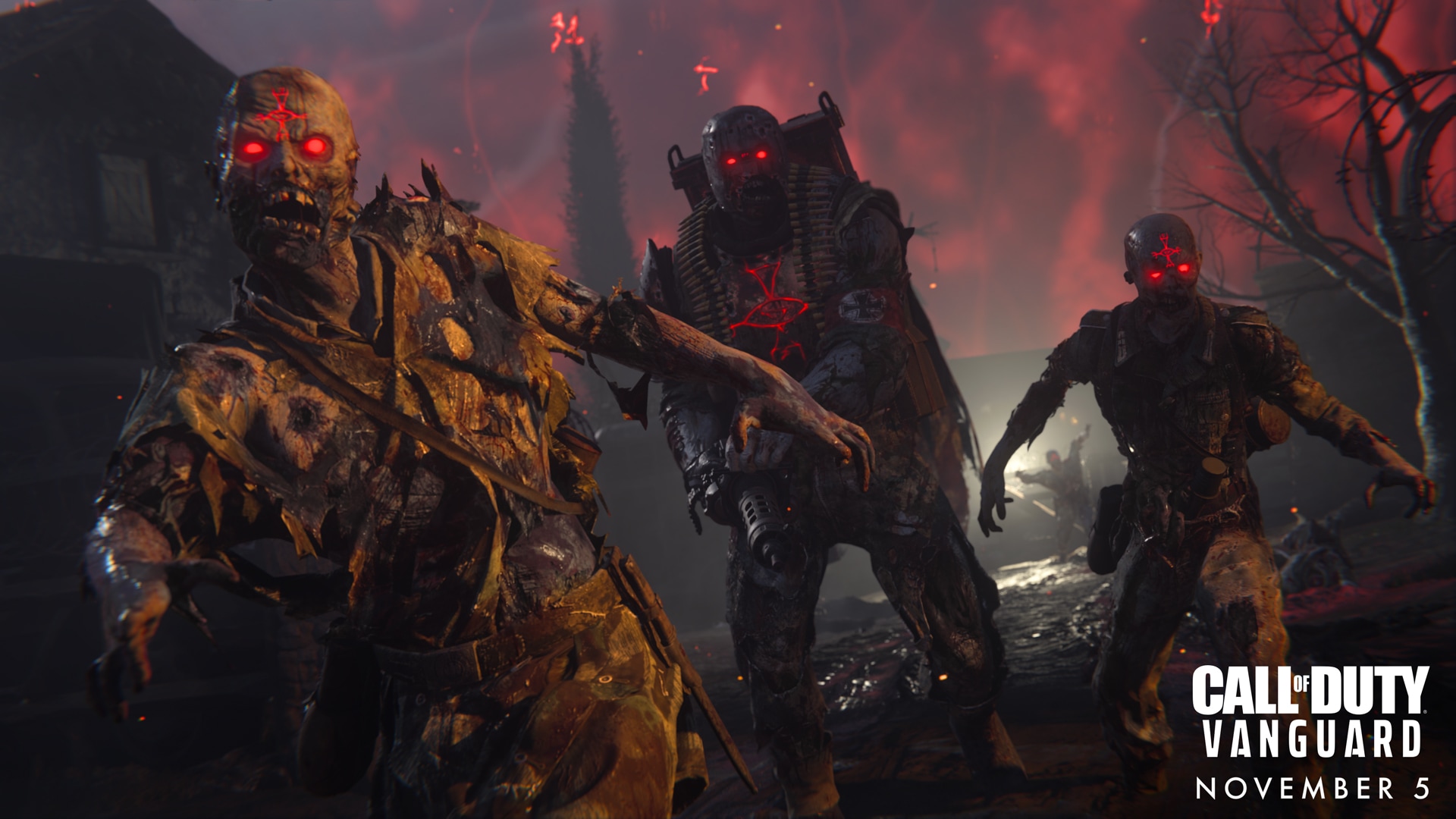 Just as in Multiplayer, Zombies players can gather across platforms and generations so that you can team up with your best allies, no matter what platform they play on.

Advance through Vanguard’s Battle Pass system via unified progression between Multiplayer, Call of Duty: Warzone, and Zombies. Your player level is shared between the modes, too, so you’re always progressing in tandem for a fully unified experience.

Battle against Von List and Kortifex the Deathless when Vanguard launches on November 5. Visit the Battle.net Shop to digitally pre-purchase now and get the Arthur Kingsley Operator and “Night Raid” Mastercraft SMG for use in Black Ops Cold War and Warzone now.

Digital pre-purchases also grant you access to an early pre-load of the game, so you’re ready to fight right on the game’s November 5 launch. All digital pre-purchases include the Frontline Weapons Pack, featuring one seven-attachment and one eight-attachment SMG Weapon Blueprint for Vanguard. Get more rewards for ordering the Digital Cross-Gen bundle or the Ultimate Edition.

Check the Activision Games Blog regularly for more updates and information on Call of Duty: Vanguard. Until we see you again, good luck. You’ll need every ounce of it when you confront the Dark Aether’s most powerful forces on November 5.