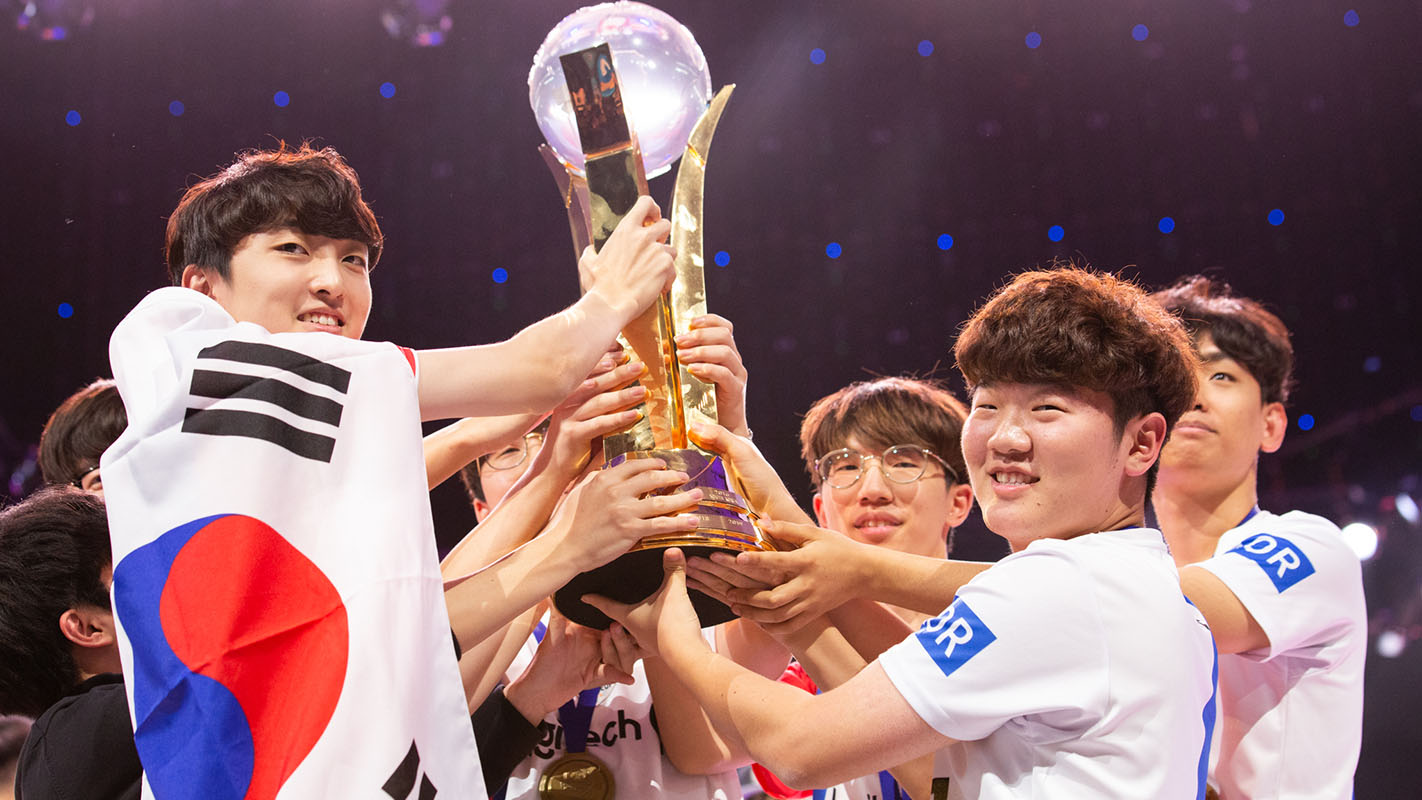 For a tournament that has only had one winner in its short three-year history, the Overwatch World Cup has been responsible for launching professional careers and landing roster spots for many players around the globe. There’s something about the BlizzCon stage that brings out the best in this community, whether it’s unheralded teams rising to the occasion, unknown players seizing their moments in the spotlight, or simply just the alchemy of top-tier competition, incredible fan support, and an amazing arena atmosphere.

This year’s competition was unpredictable in all ways except one. Team UK’s upset over Team USA set the tone for the weekend, and yes, both Torbjörn and Symmetra saw some playtime. Despite all the twists and turns, though, one thing remained true at the end of two days of fantastic Overwatch: the Koreans are still the best in the world.

Sometimes, losing isn’t so bad. Like, yes, it’s the end of the world, or at least the end of one specific road, but it can also be the start of another. Sometimes it means a mental reset. Most of the time, if you’re a professional gamer, it means learning from the loss and improving from it.

Team Canada was in a rough spot after their 3-0 semifinal loss to China. It wasn’t ever particularly close, and the players had to immediately jump into the bronze-medal match. The quick turnaround wasn’t a big concern for the team, however, because the loss had relieved some of the pressure they’d felt before.

“Once you lose the semifinals, it kind of feels like it’s a tension release, because you don’t have the pressure to win gold anymore,” Christopher “Bani” Benell said. “We’re just there to have a good time at that point. We’re just enjoying the game now.” 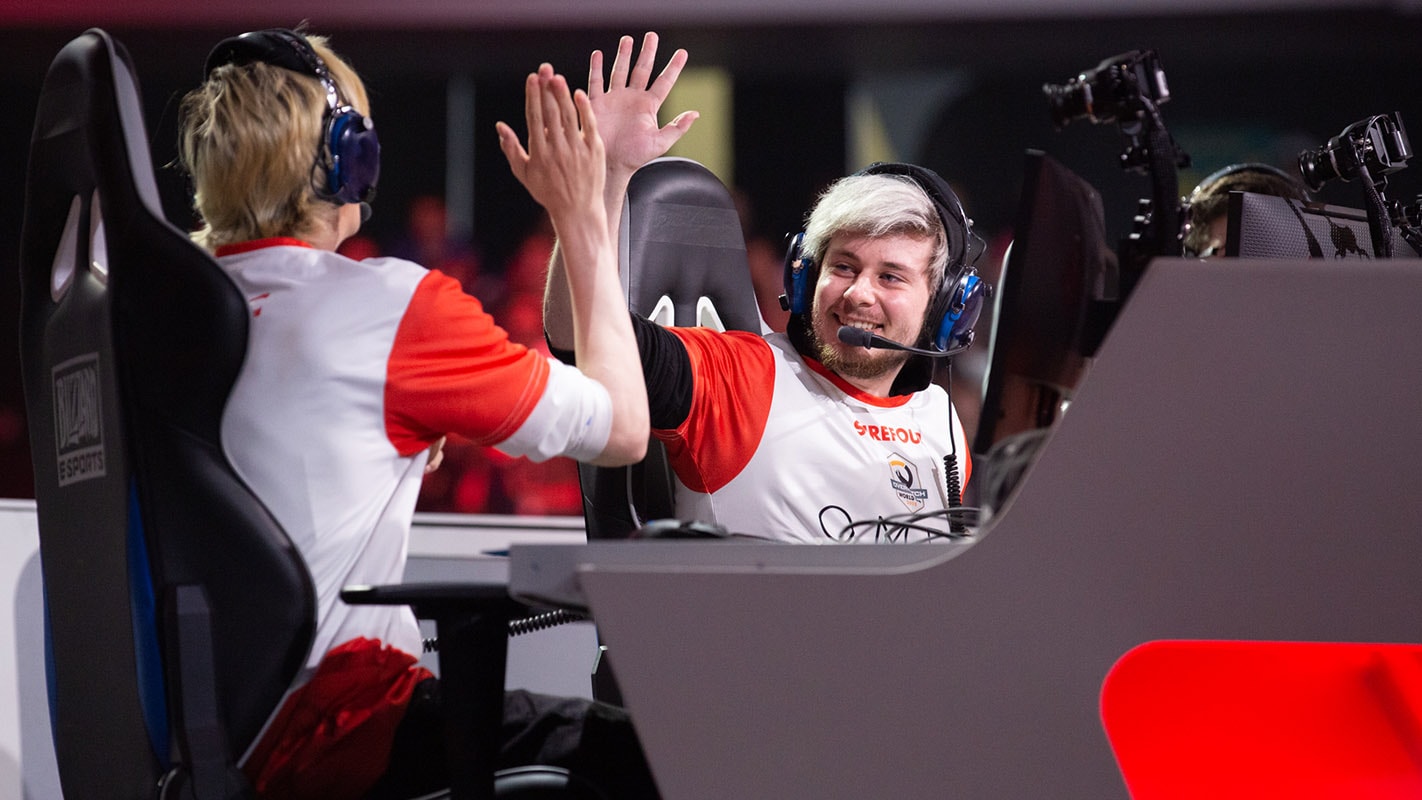 And rather than get hung up over that result, Lane “Surefour” Roberts said his team just took it step by step. “If you get preoccupied thinking, ‘Oh, that loss really sucked,’ you’re just going to be worse coming into the next match,” he said. “Once we figured out what comps we wanted to play and just be confident in what we’re doing, it was fun.”

Good teams can’t just rely on relaxing a little to win, though. They were still up against Team UK, who had stunned South Korea with two map ties before eventually succumbing in their own semifinal loss. So Canada adapted, taking a page out of their conquerors’ handbook by adapting their Winston playstyle against Team UK, particularly in the last two maps.

“China came in today super aggressive, with a comp we’ve basically never seen before, and it was really hard for us to adapt,” support William “Crimzo” Hernandez said. “And then against the UK we just popped off using the Chinese comp.”

It’s easy to be gracious in victory, but both Canada and South Korea seemed truly impressed by Team UK in their matchups. Felix “xQc” Lengyel, who mans the frontline and has to deal with most of the enemy engages, pinpointed one particular reason.

“Kyb plays a style of Brigitte I’ve never played against, ever,” he said. “He hides on flanks, on high ground, and jumps—they do long-range Brigitte flank Stun-Shatters that nobody knows how to play against. They know how to aggress when they come out of chokes.” 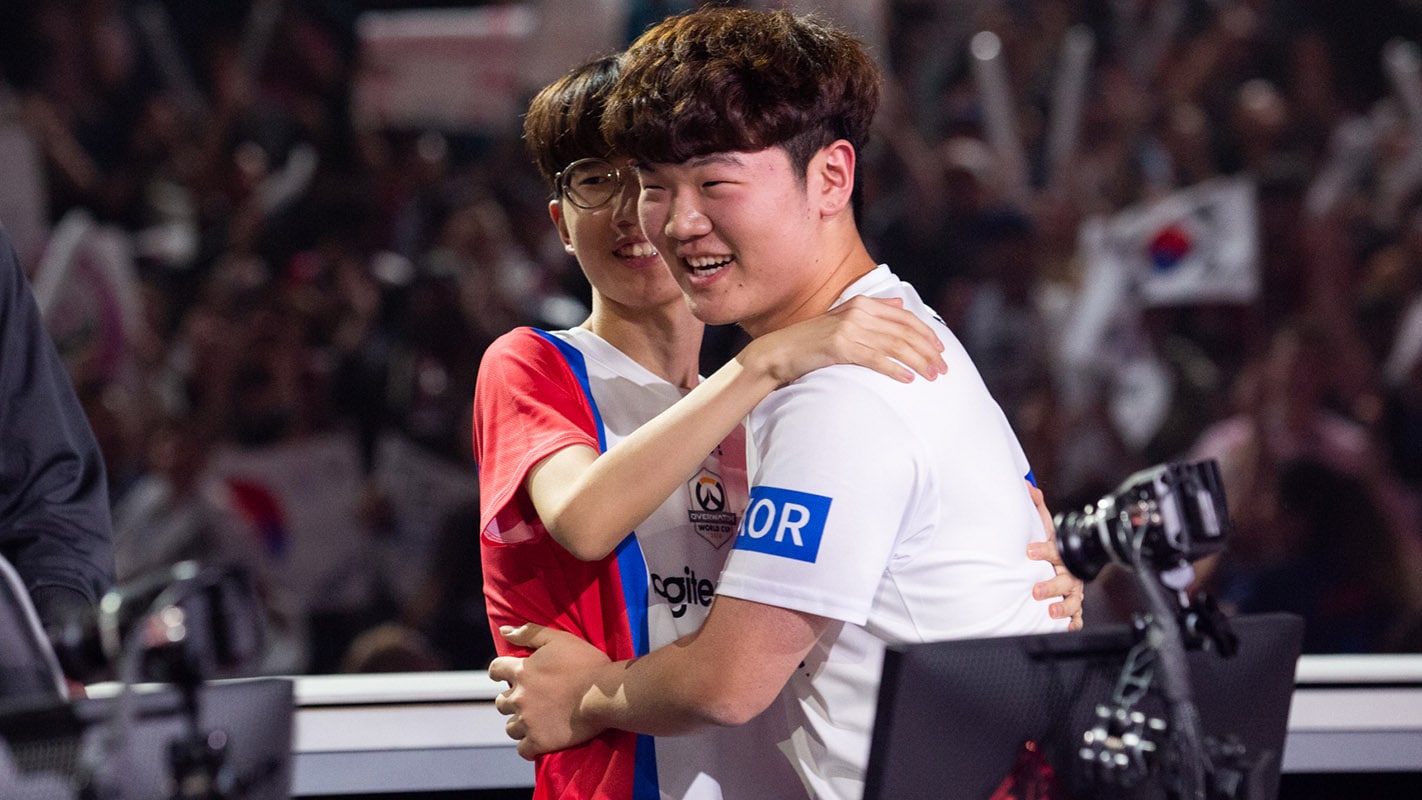 South Korea main tank Pan-Seung “Fate” Koo admitted that the UK caught his team off-guard in their semifinal matchup—a rare but hard-won 2-0 victory—saying, “They were one of the strongest teams to utilize triple-triple, and that’s why we struggled with them.”

The UK were a largely unfavored team coming into BlizzCon, with just one player having Overwatch League experience, the rest scattered across Contenders regions—making it hard to scrim consistently as a group. But preparation doesn’t necessarily require good ping, just good minds and self-confidence.

“Any team that works together and plays as a team can contest the best teams in the world,” head coach Elliot Hayes said. “It doesn't matter if you have one player from the Overwatch League, there is talent out there and, if you play well and play together as a team, you can contest the top players.

The Brits didn’t let their David status hamstring their mentality when going up against the Goliaths of Overwatch. In fact, they didn’t see it as a David vs. Goliath situation at all. 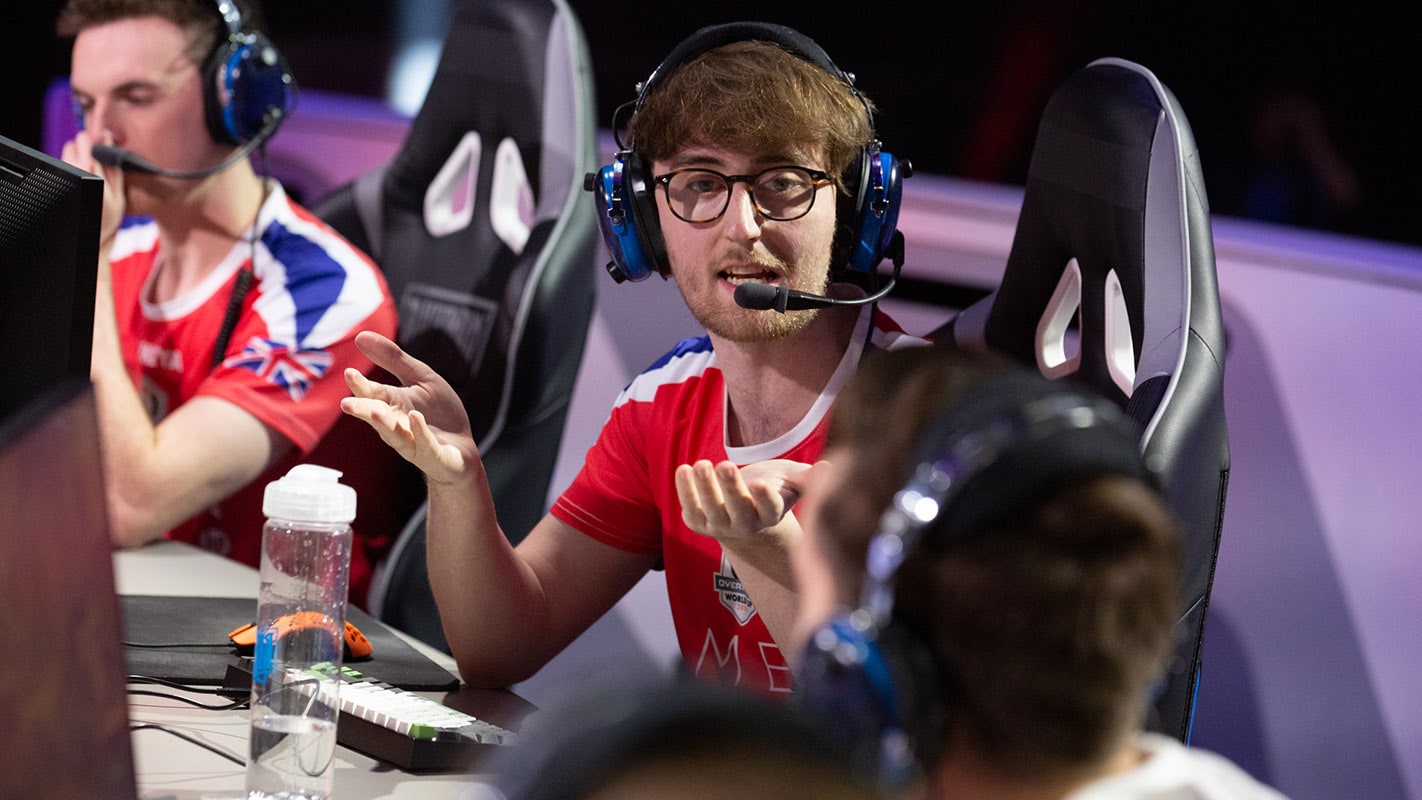 Kruise is one of the players who is now bridging that gap, having signed with the new Paris team after playing for Toronto Esports in Contenders NA. Whether some of his other standout countrymen join him and Isaac “Boombox” Charles in the Overwatch League remains to be seen, but it’s safe to say that the Seven Lions raised the profile for British Overwatch this weekend.

In the end, Korea wins

Korea may have had their issues handling the Brits, but that ordeal just seemed to make them stronger. In the end, Team China simply slammed face-first into the Koreans’ cement-truck efficiency and adjusted too late to properly mount a comeback.Losing 4-0 in the best-of-seven, in this case, was an eye-opening experience, a tough pill to swallow. 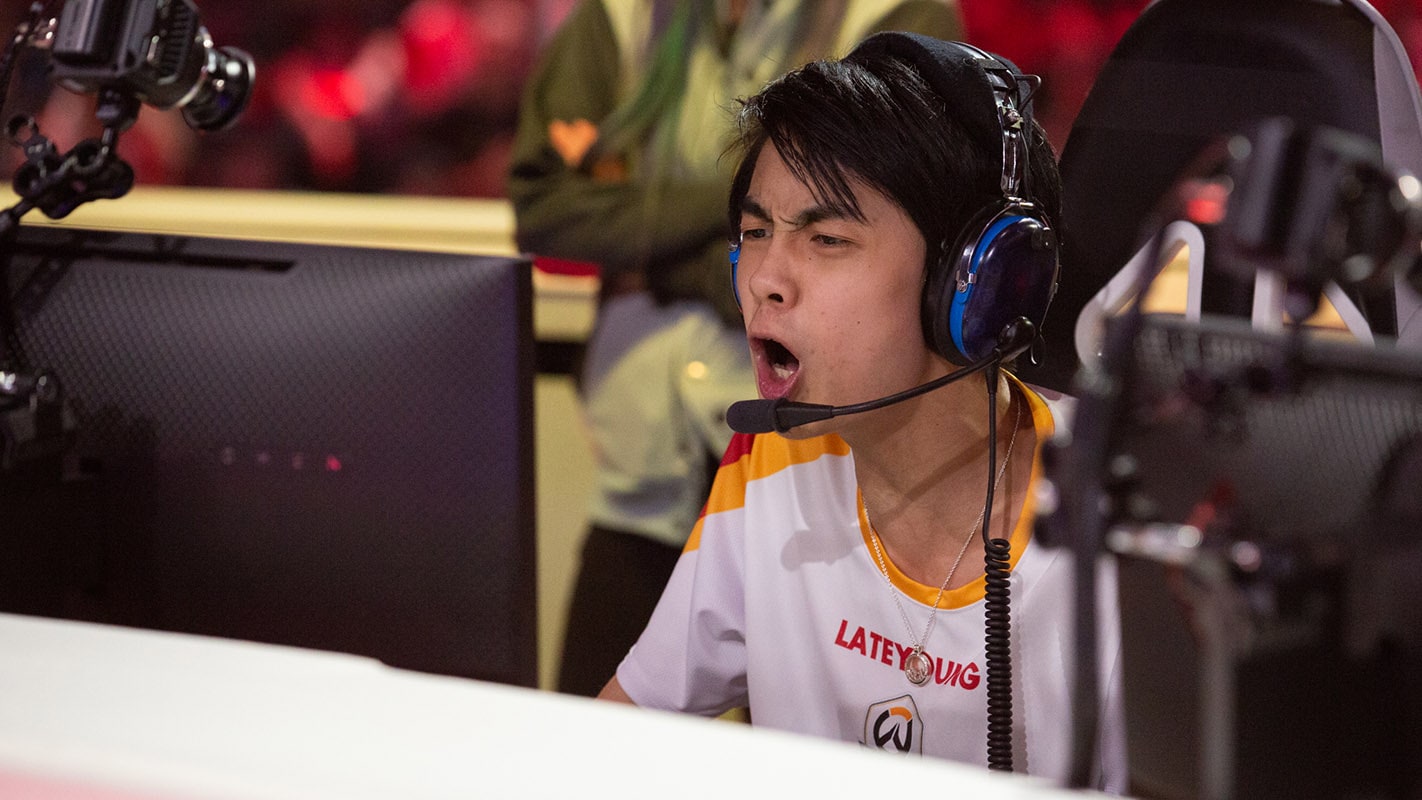 “Before the match, we knew there was a gap between our two teams, but we didn’t think it would be this extreme,” China captain and off-tank Tianbin “LateYoung” Ma said. “Their skills and team coordination truly surpassed ours, so losing today feels pretty bitter.”

Still, finishing as World Cup runners-up is an accomplishment that China can use as a stepping stone, not only for individual players, but for the region as a whole.

“Since we only made quarters in each of the last two years, getting to the gold-medal match this year was really difficult,” LateYoung said. “I hope that the Overwatch scene in China can continue to improve.”

As for Korea, the word “dynasty”—not to be confused with the Overwatch League team—is usually bestowed upon sports teams that have won multiple titles in a short period of time, and it seems applicable here. Even more impressive is the fact that they did it with a completely different roster than last year’s champions and even swapped in three new players before BlizzCon.

The question has been asked many times—why does Korea always win in Overwatch?—and the answer is multi-faceted, with footnotes. The players have their own explanation.

“In Korean culture, we have this thing where people are just very competitive,” Fate explained. “I think that competitive native is a big factor in our ability to carry on this three-year winning streak at the World Cup.” 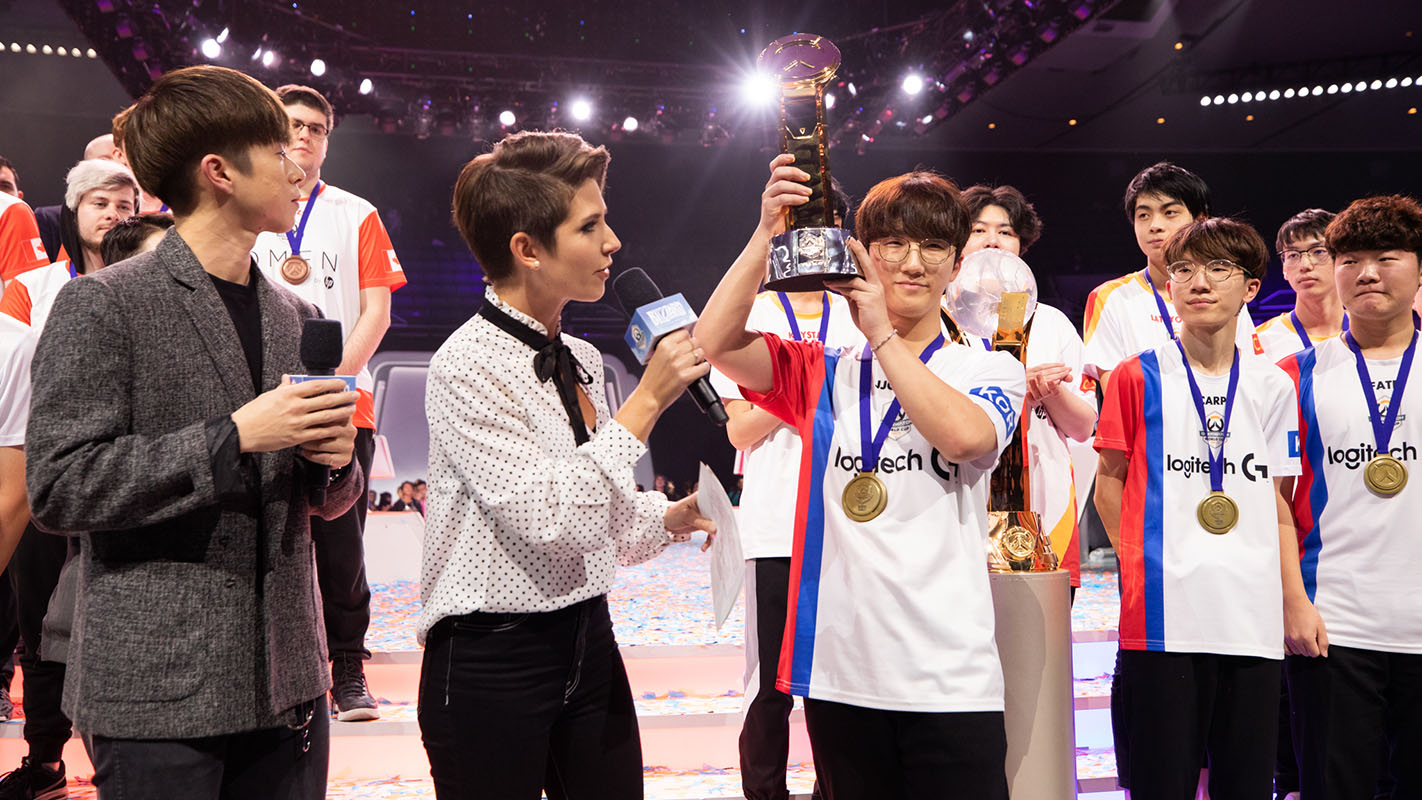 That competitive spirit extends to their own predecessors as well. When asked who would win in a battle between the three Korea championship teams, Seong-Hyun “Jjonak” Bang—the prodigious Zenyatta player who was named T-Mobile MVP of the tournament—smirked from behind the shiny trophy sitting next to him.